Lush Cosmetics Launches War on Animal Testing…But Did They Go Too Far? 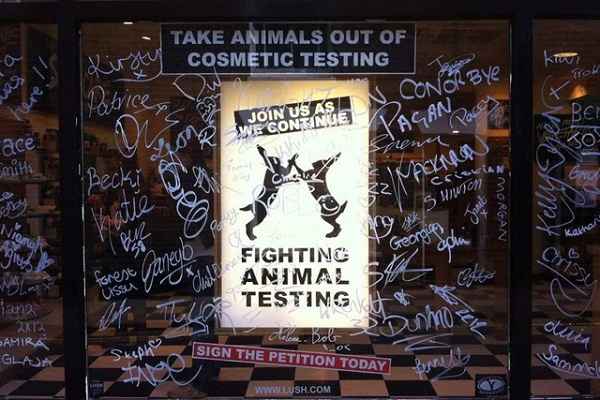 What stood out amongst the shops in Regent Street in London’s West End during the World Week for Animals in Laboratories was something more serious than an artistic window display of products.

Humane Society International and cosmetics company Lush launched a global campaign to end animal testing for cosmetics, and decided to catch everyone’s attention by staging the torture present in animal-testing in the window of Lush? Only this time, the recipient was not an animal, but Jennifer Traide, a 24-year-old social sculpture student and performance artist. Oliver Cronk, a performance artist dressed as the laboratory technician, joined her.

In this ten-hour ordeal (WARNING: Links to graphic video), food was spooned down Traide’s throat while her mouth was metal-clamped open, irritants were sprayed into her eyes, lotion was spread onto her skin, and a part of her head was shaved for the monitors and electrodes to be attached directly onto the skin. Passers-by were generally stunned by the brutality.

The Cosmetic, Toiletry and Perfumery Association told The Daily Mail that they were gravely concerned that the act “may give the misleading impression that cosmetic products are tested on animals for sale in Europe whereas the testing of cosmetic products on animals was banned in Britain in 1998 and throughout Europe in September 2004.” The association says that “it is a pity that Lush chose to run this campaign in a country where the testing of cosmetic products on animals is banned and which has the strictest animal welfare provisions regarding the use of animals for scientific purposes anywhere in the EU.”

Lush continues to urge people to fight against animal-testing by taking action and signing their direct petition at FightAnimalTesting.com. However, do you think the stunt was an appropriate way to take a stand or have they gone just a little bit too far, especially by using a woman in the protest?