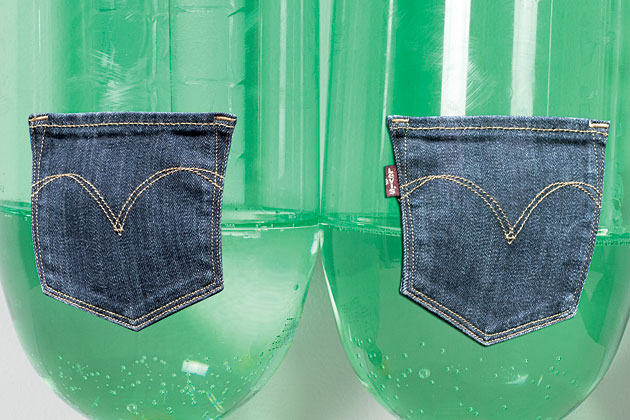 Last week, Levi Strauss unveiled its latest line of jeans, which will be made from recycled green and brown bottles. Bloomberg Businessweek reported that each pair of Levi’s Waste<Less jeans will have eight bottles blended into the denim, or about 20 percent of the total material.

The Waste<Less jeans are one step in Levi’s push to reduce environmental impact. In 2007, a life-cycle assessment of some of Levi’s popular products measured environmental impact. Levi’s discovered 49 percent of the water used over the lifetime of a pair of 501 jeans occurred in cotton farming. Another 45 percent came from consumers washing the garments, and 60 percent of the energy used to make and care for the products stemmed from consumers laundering the products as well.

Armed with this information, Levi’s set out to reduce the amount of water and energy spent during a garment’s lifetime. In 2010, Levi’s changed the care label on jeans to instruct people to wash their jeans on cold and air dry them. Additionally, last year, Levi’s unveiled its Water<Less jeans, which have so far saved 360 liters of water compared to traditional jeans.

From saving water, Levi’s began thinking about using recycled plastic in the denim. “We thought post-consumer waste would have the most relevancy with the average person,” Jonathan Kirby, head of merchandise and design, says. “It’s tangible. It’s understandable.”

The sheen of the brown and green bottles are visible on the inside of the jeans initially, but over time with wear, the color will show through to the outside. Levi’s says this effect tells the story behind the jeans and provides visual appeal.

The first batch of the Waste<Less jeans have already used 3.5 million recycled bottles.