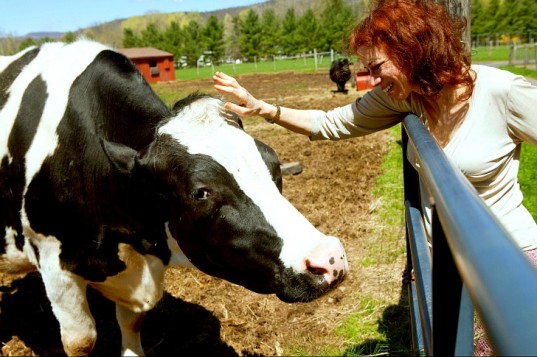 Vegucated is a feature-length documentary that follows three meat- and cheese-loving New Yorkers who agree to adopt a vegan diet for six weeks. The film premiered in New York City on October 13 and is now in the midst of an Autumn tour across the country."> Is Your City Getting Vegucated? - One Green Planet
Food Monster App Tiny Rescue Shop Newsletter Support Us Cookbooks Petitions

Is Your City Getting Vegucated?

Vegucated is a feature-length documentary that follows three meat- and cheese-loving New Yorkers who agree to adopt a vegan diet for six weeks. Filmmaker Marisa Miller Wolfson premiered the documentary in New York City on October 13, after spending seven years working on the project and is now in the midst of an Autumn tour across the country.

The documentary hits the west coast this week, with screenings in San Francisco and Sacramento, followed by a Los Angeles premier on October 27, where TV icon and longtime animal advocate Bob Barker will be in attendance. “Skinny Bitch” author Rory Freedman will be the emcee for the evening and One Green Planet contributor Simone Reyes (from “Running Russell Simmons”) will also be in attendance. The L.A. premier will feature an exclusive after party where you can sample delicious vegan treats and organic vegan wine with the filmmakers, cast, and other special guests.

Check out the list of cities that are getting Vegucated as part of this Autumn Tour and if you don’t see your city on the list, find out how you can host a screening.

Watch the trailer below:

Let’s get your city, the country, and then the world Vegucated!