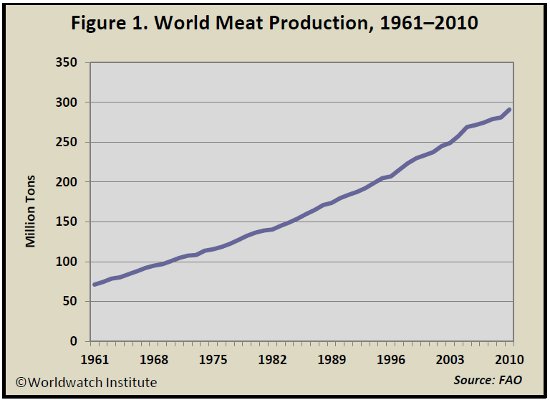 According to a new report from the Worldwatch Institute, global meat production and consumption has tripled over the last four decades and increased 20 percent in just the last 10 years. "> Global Meat Production and Consumption Rises, with Devastating Consequences for People, Animals and the Planet - One Green Planet
Food Monster App Tiny Rescue Shop Newsletter Support Us Cookbooks Petitions

Global Meat Production and Consumption Rises, with Devastating Consequences for People, Animals and the Planet

According to a new report from the Worldwatch Institute, global meat production and consumption continues to rise. Meat production has tripled over the last four decades and increased 20 percent in just the last 10 years. Industrial countries are consuming growing amounts of meat, nearly double the quantity in developing countries.

“Much of the vigorous growth in meat production is due to the rise of industrial animal agriculture, or factory farming,” said Danielle Nierenberg, Worldwatch senior researcher and co-director of Nourishing the Planet. Factory farms pollute the environment through the heavy use of inputs such as pesticides, herbicides, and fertilizers used for feed production.  Large-scale meat production also has serious implications for the world’s climate. Animal waste releases methane and nitrous oxide, greenhouse gases that are 25 and 300 times more potent than carbon dioxide, respectively. “The world’s supersized appetite for meat is among the biggest reasons greenhouse gas emissions are still growing rapidly,” said Worldwatch President Robert Engelman in a press release.

The report also highlighted how dirty, crowded conditions on factory farms can propagate sickness and disease among the animals. Further, mass quantities of antibiotics used on livestock contribute to antibiotic resistance in animals and humans.

Antibiotics that are present in animal waste leach into the environment and contaminate water and food crops, posing a serious threat to public health. The report also highlights how a diet high in red and processed meats can lead to a host of health problems, including obesity, diabetes, cardiovascular disease, and cancer.

Below are some additional startling facts from the report:

There’s no better time than now to reconsider your diet to help combat the global crisis that’s unfolding due to our demand for meat and other animal products. If not for the animals or the environment, at least do it for your health and for the lives of future generations on this planet.