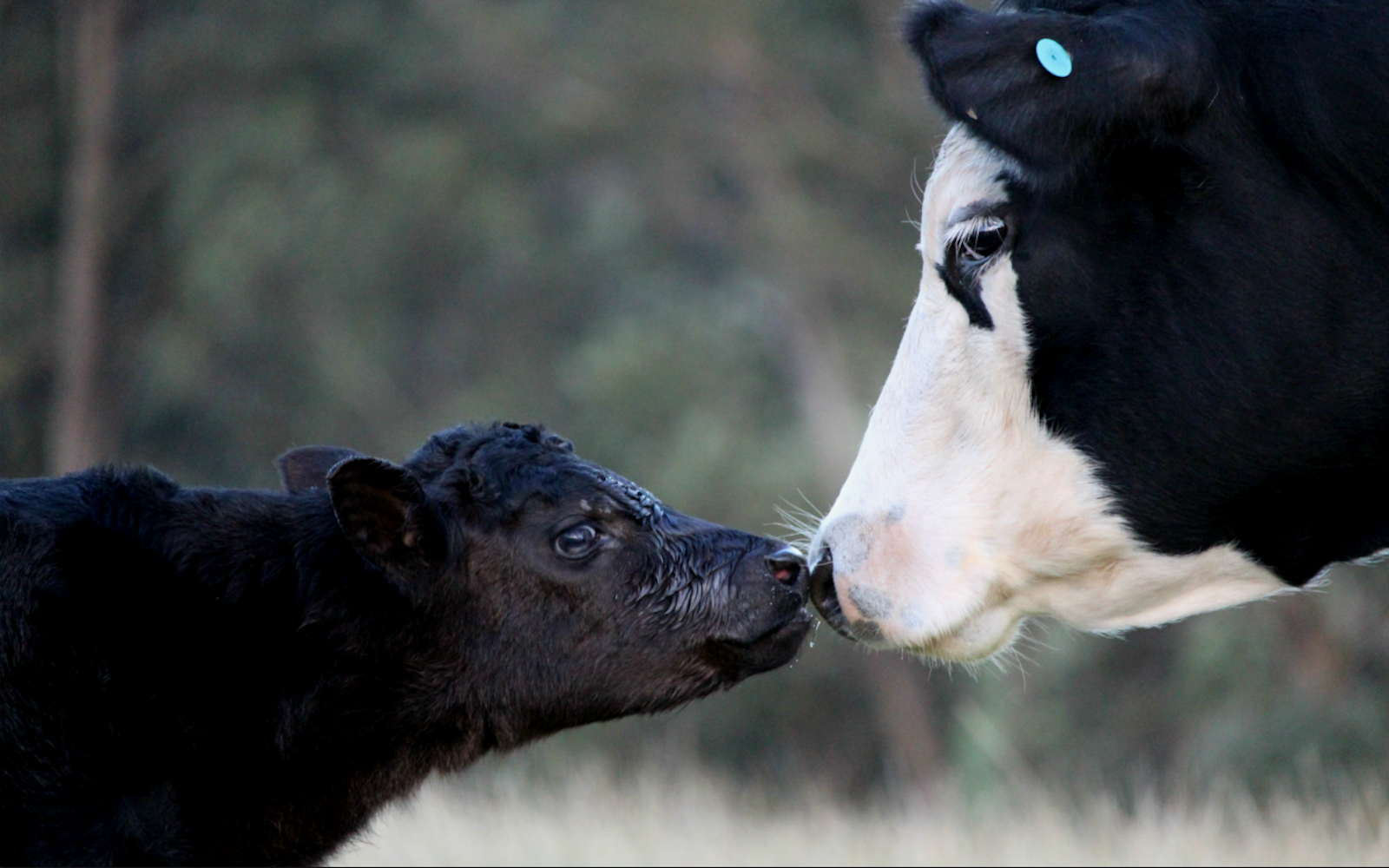 Another FAIL for Big Dairy! In an effort to encourage people to drink more “baby cow juice”, the dairy industry has launched a pro-milk campaign called on Twitter “Februdairy” (we’d like to point out, we are still in January). This campaign is positioned as a counter to “Veganuary,” a month-long effort for people to cut out all meat and dairy products from their diet and try going vegan. The Twitter initiative was a clear, desperate attempt to get consumers back on the dairy milk side (due to plummeting sales), but Februdairy turned out to have, surprise, surprise, the complete opposite effect … and it isn’t even officially February yet!

Hundreds of plant-based milk lovers hijacked the #Februdairy feed, sharing why they are done with dairy!

Many came prepared with the undeniable truth: the dairy industry is cruel. In order to maximize milk production, cows are subjected to a relentless cycle of impregnation, birth, lactation, and re-impregnation. Baby calves are taken away from their mom’s within hours of birth. 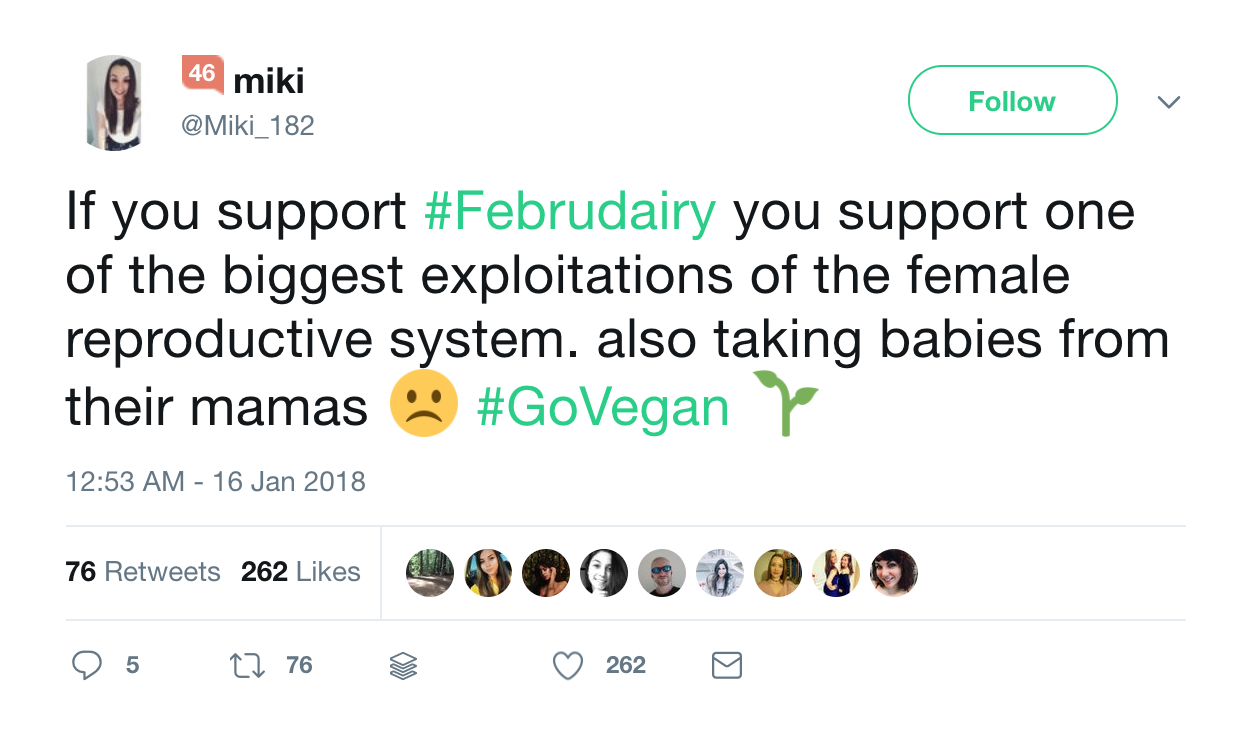 Many are simply DONE with outdated thinking and looking to actually improve the whole planet … you know, instead of just improving milk sales. 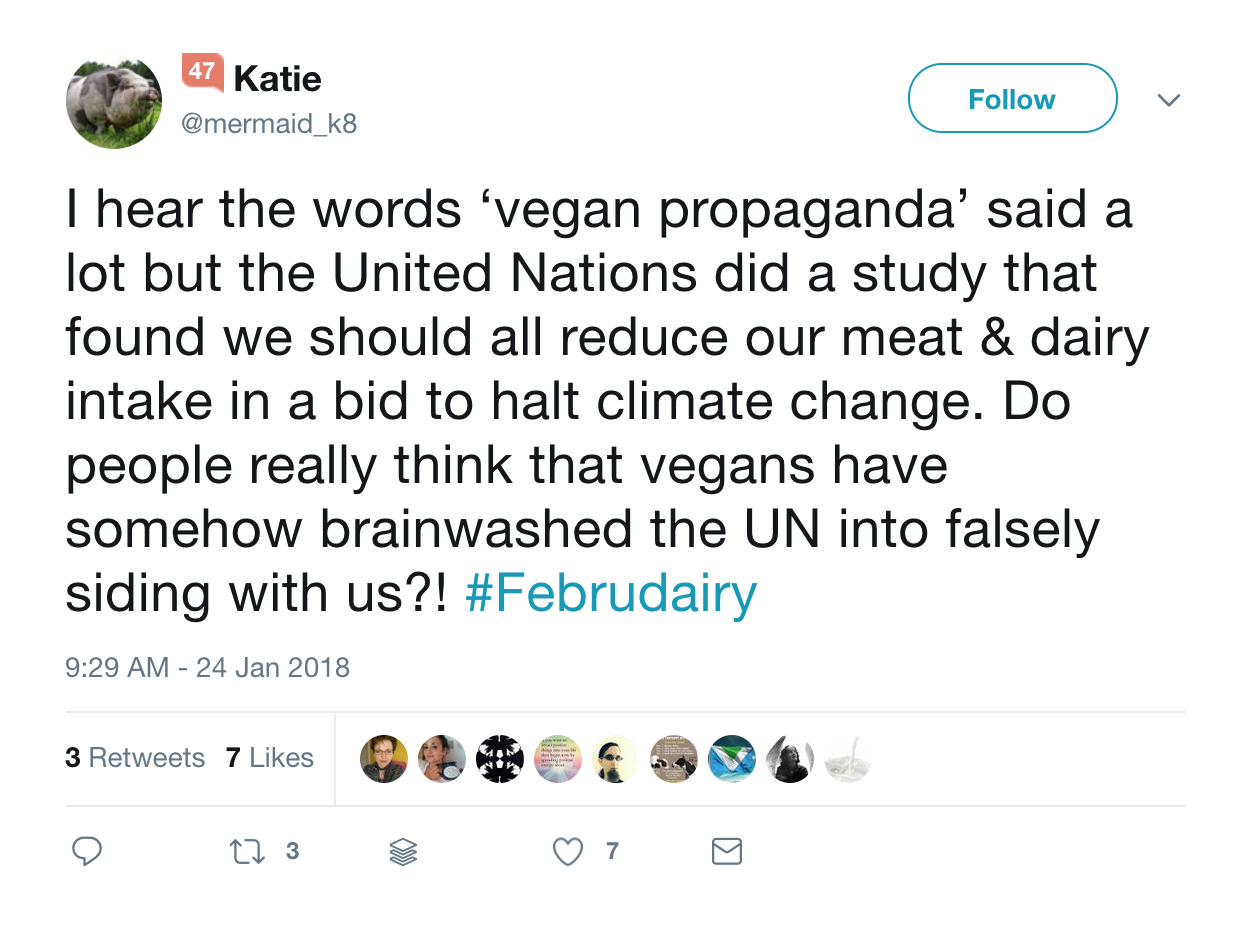 Others aptly pointed out the opportunity in the plant-based sector due to consumer demand for non-dairy products. Hey, if Elmhurst, a 92-year-old former dairy plant, can embrace plant-based alternatives, we can’t imagine it’s that hard. 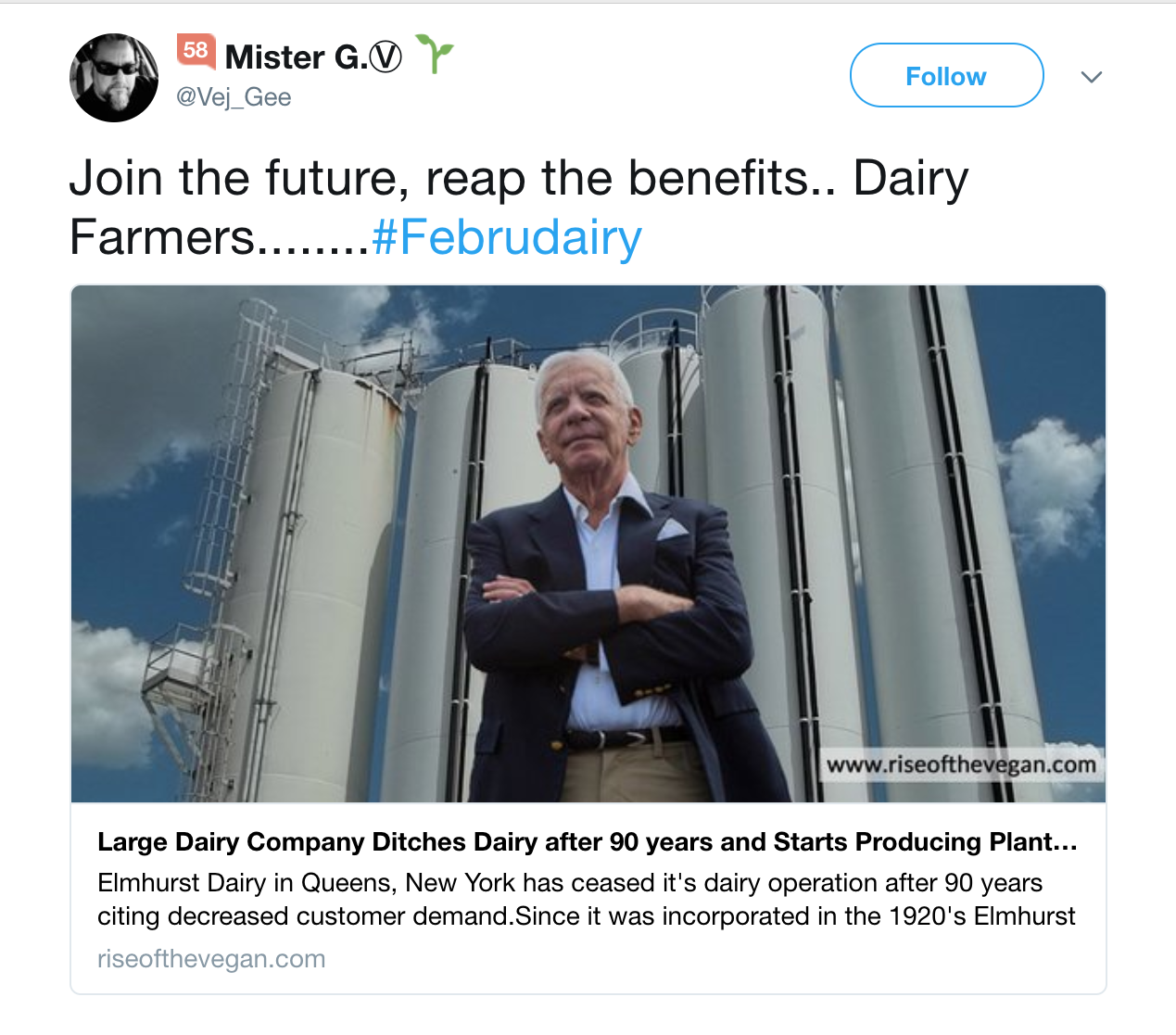 Countless tweeters pointed out the fact that when you think about it … drinking cow’s milk is actually really odd.

Some users saw the #Februdairy campaign as a great opportunity to raise awareness about the sh*t people rarely talk about … like the fact that our waterways and land are being saturated with tons and tons of dairy cow manure. 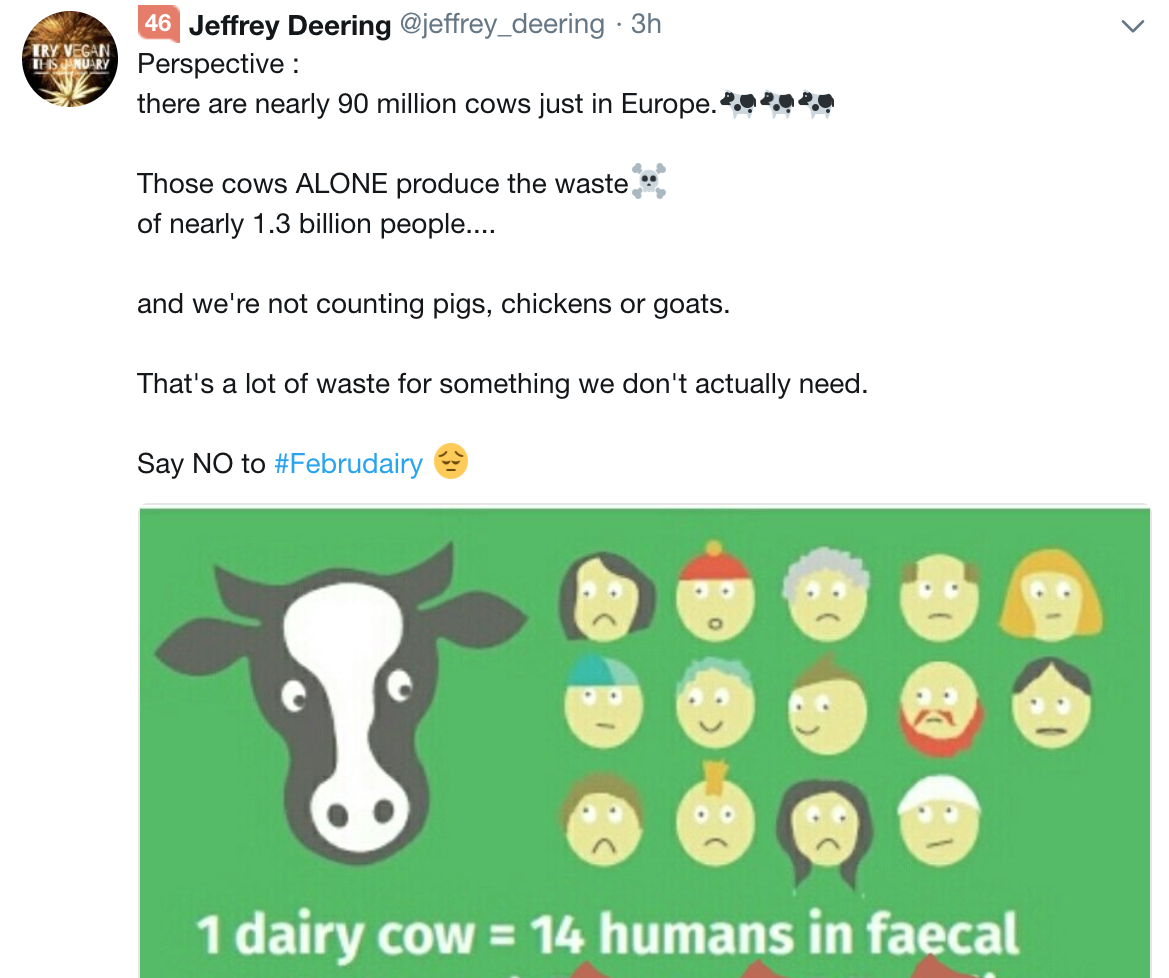 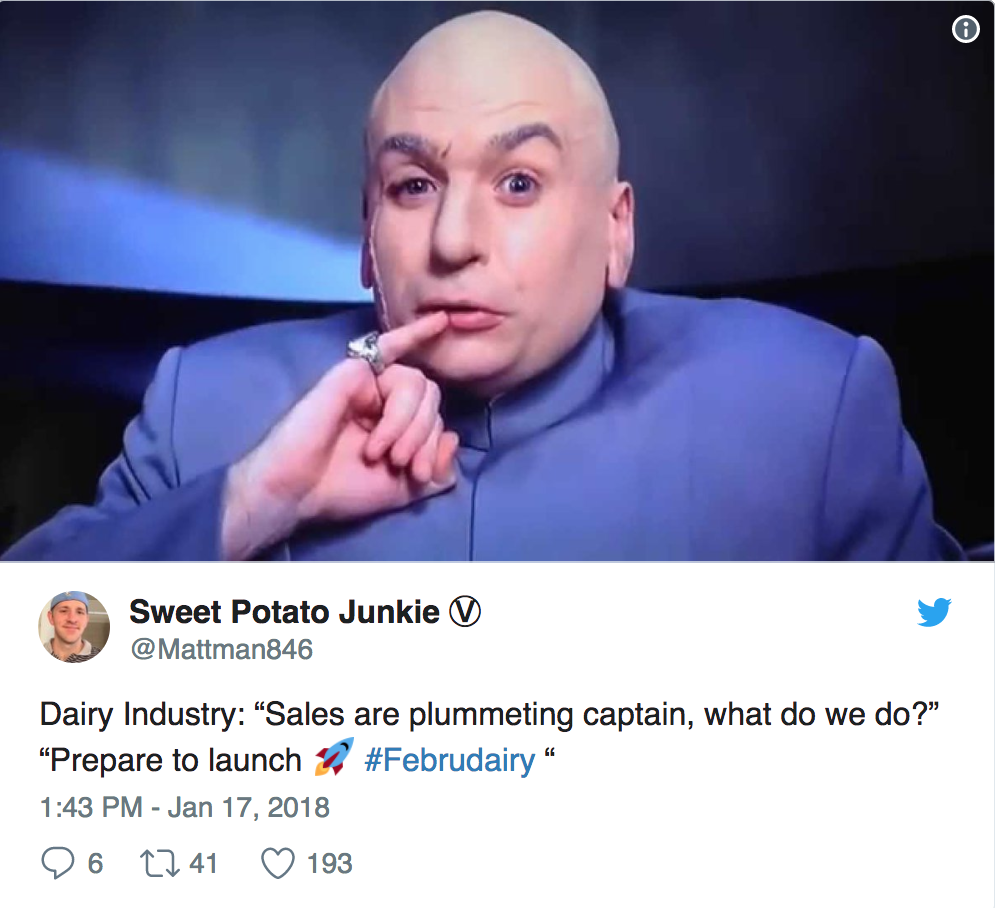 Perhaps Big Dairy Execs are just living in a universe where a Twitter hashtag can change cold, hard facts? 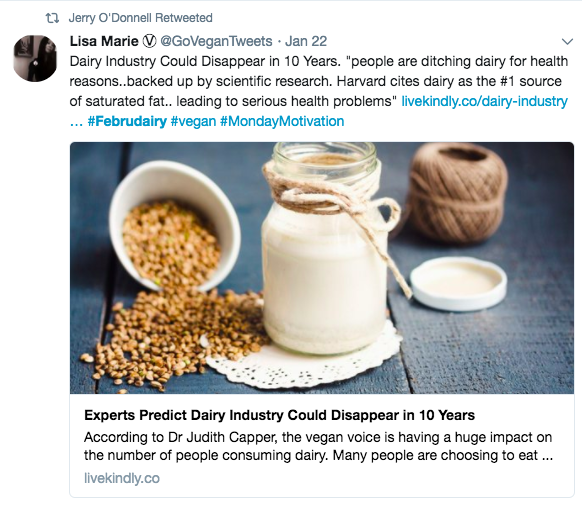 So long, cow’s milk! Doesn’t look like the vocal masses on Twitter (or really anywhere else) will miss ya!

We’re not impressed at all with this attempt to bring back dairy because cow’s milk has been falling out of favor for a while. Milk consumption in the United States has been steadily declining by 25 percent per capita since the mid-1970s. With the rise in lactose intolerance, milk allergies, growing caution over hormones and antibiotics in dairy, as well as animal welfare concerns, consumers are actively seeking dairy-free alternatives.

The plant-based milk industry has been major growth in recent years, with almond milk leading the way with a 250 percent growth in sales between 2000 and 2015, which was likely a deciding factor for the former California dairy farmers that now have almond groves. People are so over dairy milk that you can find plant-based alternatives in varieties ranging from pea protein to hemp and peanut – that kind of consumer demand doesn’t exactly say “passing fad” … it screams “the future of food!”

As Adam Lowry, CEO of Ripple Foods, so poignantly pointed out, cows are a very inefficient way to produce milk. No one wants to see animals suffering, they don’t want to contribute to air and water pollution, and they certainly do not want to consume something that doesn’t agree with their stomachs’. When faced with a better option that has an identical – if not superior – nutritional profile, consumers will always choose better. It is time the dairy industry stopped trying to make milk “happen” and just joined the cool kids at the dairy-free table.

Want to hear more of what Adam Lowry has to say about the rise of plant-based dairy alternatives? Listen below!