Chimps May Have the Ability to Understand Language Like Humans 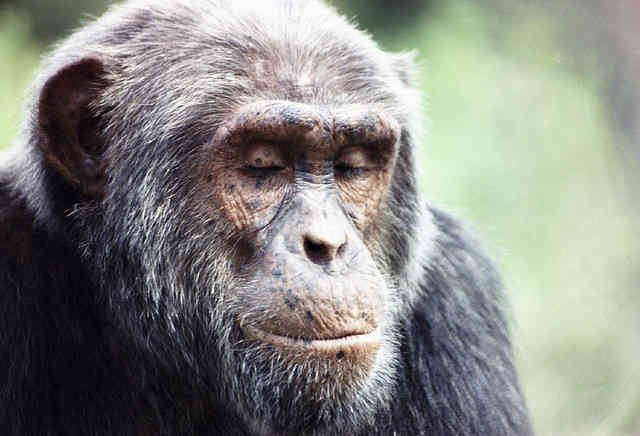 Panzee, a 25-year old chimpanzee has demonstrated that speech perception is not a uniquely human trait. Panzee understands more than 130 English language words and even recognizes words in sine-wave form, a type of synthetic speech that reduces language to three whistle-like tones. This proves that she is not just responding to a particular person’s voice or emotions, but instead is actually processing and perceiving speech as humans do.

Panzee’s amazing language skills refute the idea that humans have brains uniquely adapted to process speech, say the scientists who have published their findings in the journal Current Biology.

Panzee was raised from 8 days old, by humans, and was spoken to and treated as if she were human. At the same time, she was taught to use symbols called lexigrams to communicate.

“I think our results just reinforce the fact that experience matters. Humans maybe do not perceive speech because they are human, but instead because of the tremendous amount of experience they have with it from birth”, explained Lisa Heimbauer, a Ph.D. candidate and researcher at Georgia State University’s Language Research Center.

The research — using human speech patterns distorted to near-unrecognisable fashion – could lead to a new understanding of how children learn to understand language.