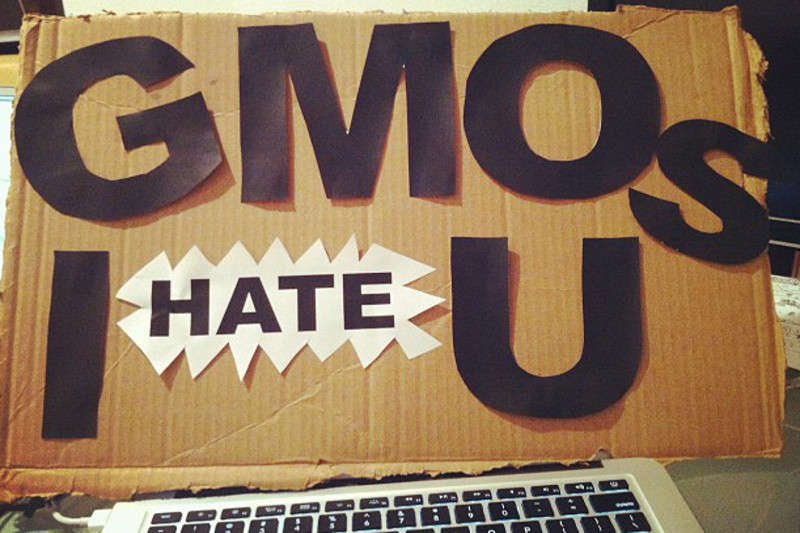 GMOs, or genetically modified organisms, are organisms such as bacteria, fish, insects, mammals, plants and yeast whose genetic makeup has been altered through genetic engineering procedures. Merging DNA from different species, creates unconventional animals, bacteria and plants that are not naturally found in customary crossbreeding or even in natur.

Provisions grown through GMOs can lead to better tasting and longer lasting foods, not to mention, they are immune to insects and are capable of withstanding harsh weather changes such as drought, frost and heat. This allows the use of fewer natural resources, which leads to more crops being grown in more places. But who really benefits from GMOs? An increase in crops provides a tremendous economic gain for farmers, but what about the consumers? What are we really risking by allowing our food to be injected and consumed with GMOs?

In the United States alone, GMOs make up about 70-80% of the foods we consume. Most foods that contain GMOs are processed foods.

2. The Instability of Health

In most developed countries, GMOs have been banned or placed under strict regulations. After the introduction of GMOs, chronic illnesses, food allergies and disorders like reproductive and digestive ones have increased with time. Although thorough research has yet to be conducted directly linking GMOs to these conditions, some doctors are urging patients to avoid high quantities of foods with GMOs due to its unnatural factors.

Seeds that have been subjected to GMOs are resistant to weeds, but weeds growing in the same areas become exposed to GMOs. Over time, the weeds become resistant as well, causing farmers to use stronger chemicals, which affect the safety of the crops that people consume. More chemicals can lead to more health problems derived from the food we eat.

Not all farmers benefit from GMOs. When seeds are induced with GMOs, they “travel” to other farms and even in the wild making it almost impossible to eliminate all GMOs. Organic farmers face the devastation of huge economic losses trying to keep their crops pure when competing. In addition, the health of future generations are placed at risk due to these “traveling seeds.”

Farmers and/or independent scientists, who discover issues with GMOs or attempt to expose the issues, have been attacked, threatened, fired or even denied funding. At the end of the day, it comes down to money. Information that may tamper with the fact that GMOs produce more long-lasting cash crops is concealed.

Without labels, how are people to know which foods have been genetically modified? Despite an increase for the demand of labels, one of the greatest hazards with genetically modified foods is that there is no legal label requirements to indicate which foods have been altered. Some are labeled with a Non-GMO sticker, but the fact is, a lot of the foods people consume do not have labels so many people are unaware of what they are actually consuming.

Because research on GMOs has not been thorough or explicit, the effects that GMOs will have on the greater human race is still unknown. However, considering the health risks of ingesting these types of foods on a regular basis, it is safe to say that GMOs, being unnatural, will have a negative long-term impact on the human race as a whole.

8. GMOs—Not an Excuse for Food Security

Yes, more crops are grown, but at what cost? Powerful monopolies like Monsanto, a genetically engineering company that controls about 90% of the genetically modified foods worldwide are given complete control over the foods we eat. They sell GMO seeds too farmers, which are not inexpensive; therefore, many farmers are forced to purchase the seeds leaving them dependent on major companies or face the vulnerability to hunger.

Exposure to anything that has been genetically modified cannot be considered safe or healthy because it is, well, to put it simply, unnatural! Disturbing the environments natural genetic makeup can eventually result in the reproduction of unnatural animals and plants including humans.

10. A Closed Mouth Does Not Get Fed

One way to help reduce the use of GMOs is to get educated and simply not eat foods that contain it. Patience and portioning are tactics that should be practiced to help eliminate the modifications of our food. GMOs produce more crops versus growing them naturally. Yet, if we allow for crops to grow at their natural rate and portion the foods we eat, a demand to have more than what we actually need will decrease leading to more natural methods to produce our food.

The bottom line is that genetically modified foods are just not natural and have not been proven to be safe. In America, there are not even labels to inform consumers that what they are about to eat has been genetically modified in a lab and not from the earth. Now, that’s scary!