All About the Extremely Unhealthy, Uncool and Environmentally Damaging Bacon Craze 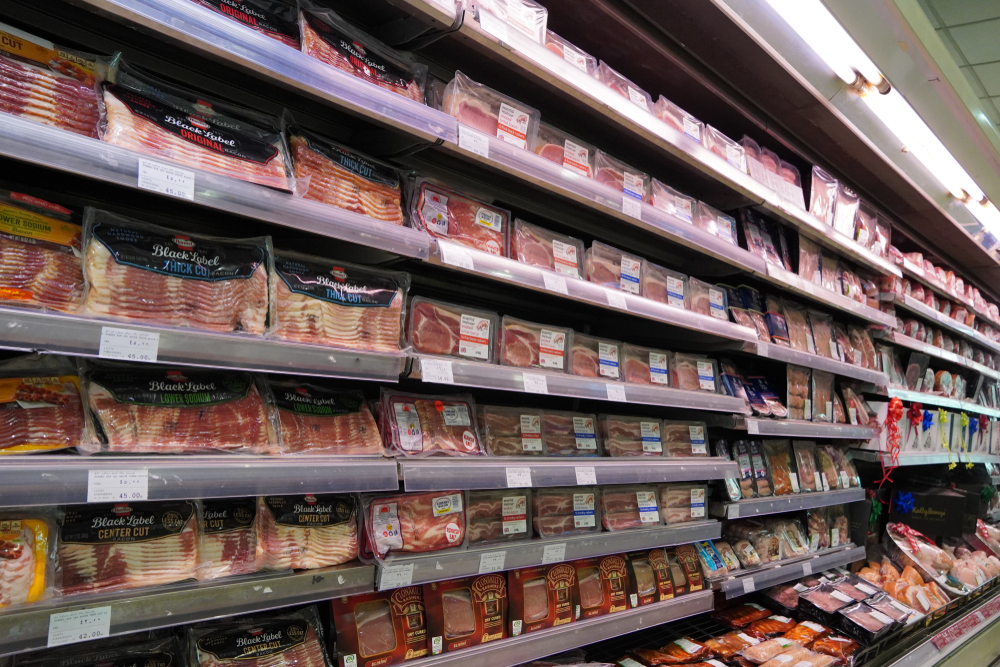 “Bacon is meat candy.” “Keep calm and put bacon on.” These slogans, popular on t-shirts today, reflect the full-on craze for bacon. Nearly every conceivable consumer product is being wrapped or infused with bacon. From high-end restaurant fare to doughnuts to inedible consumer products such as condoms, deodorant, and toothpaste—bacon is seemingly everywhere. Yet most humans caught up in the bacon craze remain unaware of the vast suffering, environmental degradation, and negative health effects that accompany pork and bacon production.

Pigs are one of the top five animals killed for food, after chickens, ducks, and marine animals. The majority of pigs in the U.S. live short, miserable lives on industrial farms. Closely confined sows are forcibly impregnated to rapidly-produce piglets, who are slaughtered as quickly as possible to meet the rising consumer demand for pork and bacon. Pigs in factory farms live an average of only six months, though their natural lifespan is 10-15 years. 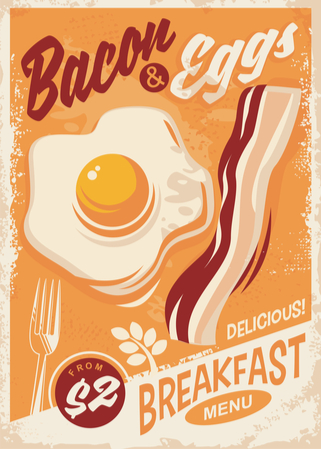 Bacon for Breakfast and Beyond

Bacon and eggs is a traditional breakfast in America, but how did the tradition begin? Nearly a century prior, in the 1920s, the man considered to be the father of public relations, Edward Bernays, was hired by the Beech-Nut (of baby food fame) meat-packing company. Sales of one of its key meat products, bacon, were lagging. Bernays, a nephew of Sigmund Freud, was well-versed in his uncle’s theories. He understood that humans are irrational and subject to the herd instinct. For his Beech-Nut campaign to sell more bacon, Bernays applied crowd psychology and psychoanalysis to influence the American populace. Bernays’ approach was not to directly sell the company’s pork product, but to devise an approach that he dubbed “the engineering of consent.”

Bernays’ strategy was to appeal not to the rational part of the mind, but rather the subconscious. Then-traditional advertising campaigns would repeat a stimulus to create a habit—the advertisers inundated consumers with full-page ads and offered incentives or rewards in the form of discount coupons (the stimulus) to prompt consumers to repeatedly purchase a product (the habit). To create a new Freudian-style campaign, Bernays relied on physicians to influence what Americans ate for breakfast. Bernays first approached his friend, a well-known New York doctor, to ask whether a hearty breakfast might be better for Americans than consuming just the standard meal of coffee, juice, and cereal. The doctor, believing that the human body loses energy during the night, answered affirmatively, leading to the next logical question from Bernays: “Would bacon be considered part of a hearty breakfast?” The answer from the doctor, of course, was yes. Bernays then persuaded the doctor to write to 5,000 other physicians, asserting that the body lost energy during the night and asking if they agreed that eating a hearty breakfast would be an effective way to energize for the day. About 4,500 doctors responded affirmatively.

Bernays proceeded to share the results of this survey with newspapers throughout the country, and each one adopted a variation of the same headline: “4,500 Physicians Urge Americans to Eat Heavy Breakfasts to Improve Their Health.” The media reported that physicians overwhelmingly recommended a hearty breakfast, stating that there was no heartier meal than bacon and eggs. Bernays’ campaign effectively convinced many Americans to swap their usual juice, toast, and coffee for a “heartier” breakfast of bacon and eggs.

Bernays, by utilizing strategic marketing tactics that prompted the public to sell to itself, created an idea about breakfast that has survived for generations. The misleading notion that bacon and eggs are somehow good to eat first thing in the morning has since been passed down through the generations and is now ingrained in American culture. The reason that Bernays’ strategy was so effective was that he utilized authority, that of 4,500 doctors, in this case, to significantly increase the consumer demand for bacon. Bernays, being Jewish, ironically did not himself eat bacon.

By the 1950s, pork consumption had fallen behind that of beef; in that era, the most desirable meat was beef, steak in particular. Consumers in the 1950s coveted large, marbled, juicy steaks. Throughout the 1950s and ‘60s, per capita consumption of beef rose until it peaked in the mid-to-late 1970s. Consumption of pork further declined in the 1980s as a result of the fitness and low-fat-food trends prevalent during that time. Many health-conscious Americans were switching from red meat to fish and leaner meats, such as poultry. The pork industry’s response, in an attempt to compete with chicken, was to devise a clever marketing tactic that promoted pork as “the other white meat.” In the 1990s, the National Pork Board began actively marketing bacon to restaurant chains. Its goal was to reintroduce bacon as a flavor enhancer, to entice customers who had tired of eating lean meats with bland tastes.

Hardee’s began serving its fast-food Frisco Burger, topped with bacon, in 1992, around the same time that Burger King added bacon as an optional ingredient on its Whopper. In the early 1990s, the National Pork Board began funding research into pork recipe development, plus lobbying restaurant chains to add bacon-based menu items. The board also funded research into precooking technology, which would enable bacon to be mass-produced in a much more efficient manner. Because bacon is cured by adding salt and other preservatives, it has a far longer shelf life than other raw meat products.

Top chefs around the turn of the century began using bacon in gourmet fare. By 2006, bacon prices had tripled since the early ‘90s and the National Pork Board began campaigning nationally with the slogan, “Bacon makes it better.” In April of 2007, Wendy’s debuted a bacon-laden burger. The cultural trend of conspicuous bacon consumption was taking off to cultish effect. Bacon was no longer just something to pair with eggs; it became widely used to enhance the flavor of recipes, menu items, and inedible products. Bacon in 2018 was found on 68.1 percent of fast-food menus. By 2022, the number is expected to increase further, to 69.8 percent of menus. The money that the National Pork Board was reportedly spending to increase bacon consumption by consumers was relatively small, equating to a few hundred thousand dollars over a decade or two. Its investment paid off better than it could have likely imagined, with bacon taking center stage well beyond just the breakfast plate. 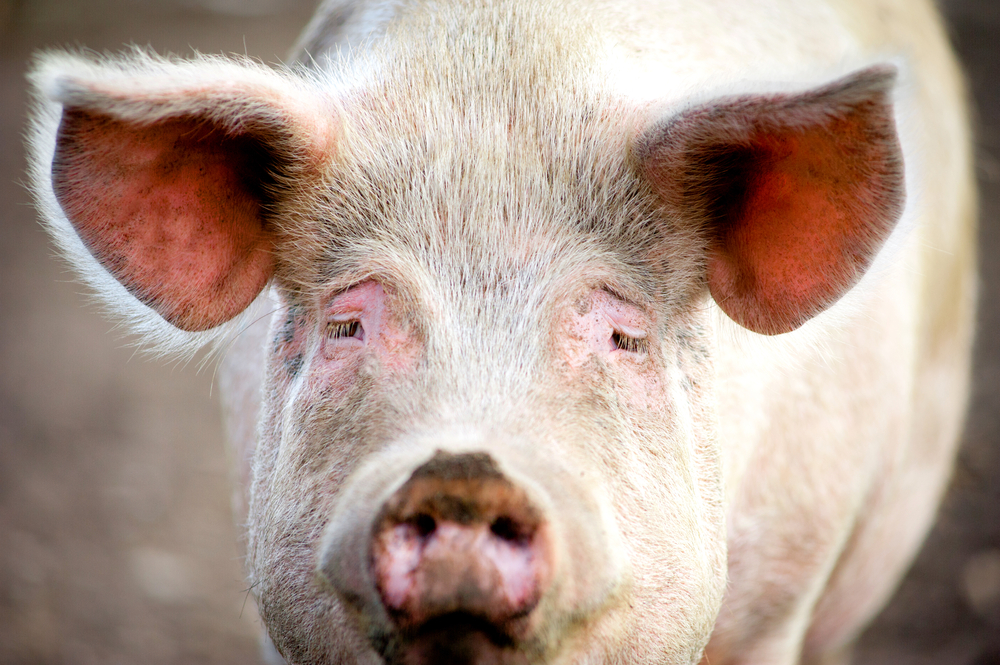 Americans each eat an average of 18 pounds of bacon per year. Recall the drippings that your mother or grandmother saved to a container after frying bacon as they would clog the drain? After cooling, the drippings gel into a solid. Many consumers believe that bacon counts as a protein serving, yet bacon is mostly fat. Over two-thirds is fat: sixty-eight percent and half of that fat is of the saturated variety. The International Agency for Research on Cancer (IARC)—the cancer agency of the World Health Organization—classifies processed meats as a carcinogen, meaning that they cause cancer. Processed meats, including ham, bacon, salami, and frankfurters, are Group 1 carcinogens, meaning that consuming them is strongly linked with cancer. The IARC has determined that processed meat is a major contributor to colorectal cancer in particular. Eating processed meat is proven to increase the risk of bowel and stomach cancer.

Bacon and other smoked, cured, and processed meats are treated with nitrates or nitrites—chemicals added to preserve shelf life and enhance color. Nitrates and nitrites, when absorbed by the human body, convert into N-nitroso, a compound that could cause cancer. Diets high in processed meats have been linked to chronic health problems including migraines, asthma, heart failure, and kidney disease. Consuming a few strips of bacon or one hot dog daily increases the risk of cancers by 18 percent. The short-term gratification of tasting bacon may not be worth the possible adverse health outcomes.

Time to Stop Porking Out

Pork and bacon are far from being healthy foods. Bacon is a fatty meat linked with multiple cancers, cardiovascular disease, and other negative health consequences. Animal bodies in this system are no more than commodified parts and pieces, existing purely for profit. Pork producers and other industrial farming corporations display no regard for their captors as actual living beings; the animals are both produced and killed as rapidly as possible. Living beings are viewed through the lens of economic profit and treated accordingly.

The corporate media continues to refine and build upon Bernays’ successful Freudian tactics to influence the public for profit. Despite known negative health and environmental consequences, human consumption of pork and bacon continues to rise. Bacon might be tasty on the plate but the pork industry is truly tasteless. Consumers must understand the true costs of supplying the bacon craze.

For delicious bacon, pork, and sausage free recipes check out these recipes: