Want to feature your brand, partner with us or learn more? Email us at [email protected]g

The following are some of the key market trends that are driving the future of food.

Thanks to growing awareness that meat is not the healthiest or the most sustainable source of protein, demand for alternative protein sources are at an all time high. According to some estimates, the plant-based meat market is set to reach $5.2 billion by 2020 and could make up one-third of the market by 2050.

Introductions of new products with plant-based proteins grew 14.7 percent in 2014 (while animal protein grew 7.5 percent). In 2015, more than 100 plant-based meat substitutes were introduced in grocery stores, according to Supermarketnews.com. 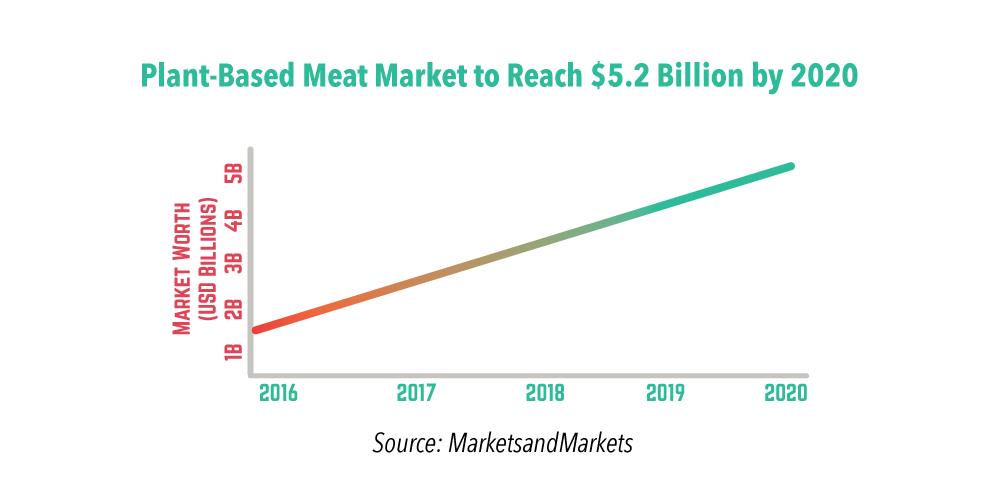 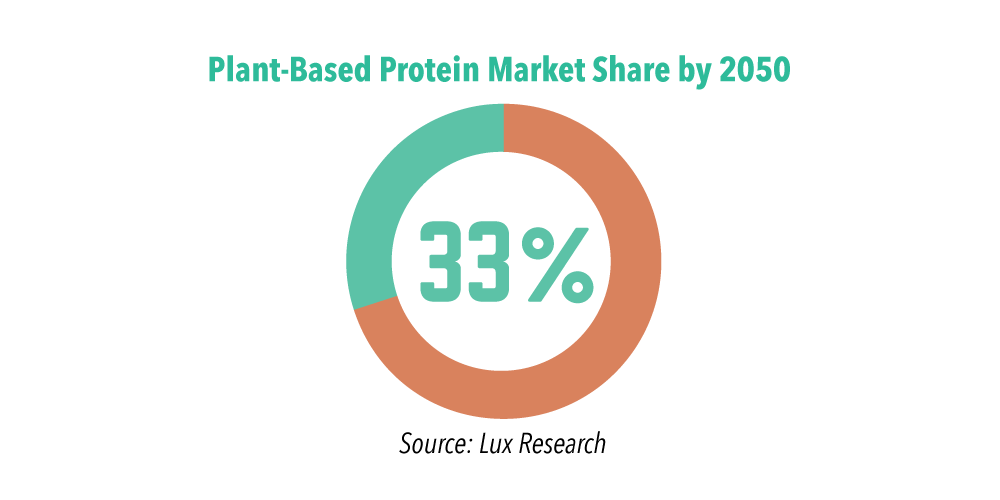 With concerns over allergens as well as antibiotic and hormone use, consumers are steadily reducing their dairy consumption. U.S. household penetration of dairy-free beverages has doubled in five years to more than 30 percent, with almond milk now accounting for almost 70 percent of sales and new nut-based milks such as cashew gaining momentum.The almond milk market alone has grown by 250 percent and become a $894.6 million industry in the past five years. Dairy-free milk sales represent a $2 billion category and growth is expected to continue outpacing dairy milk sales at least through 2018.

In addition, natural groceries saw annual sales of dairy-free cheese rise 22.7 percent in 2014 alone to $30 million and according to some experts, the dairy-free dessert market is now worth over $200 million as more consumers explore almond, coconut, and other alternatives. Dairy-free is also one of the fastest growing segments in yogurt and with 8 percent dollar sales growth year over year, this segment is estimated to reach $2.9 billion by 2017. 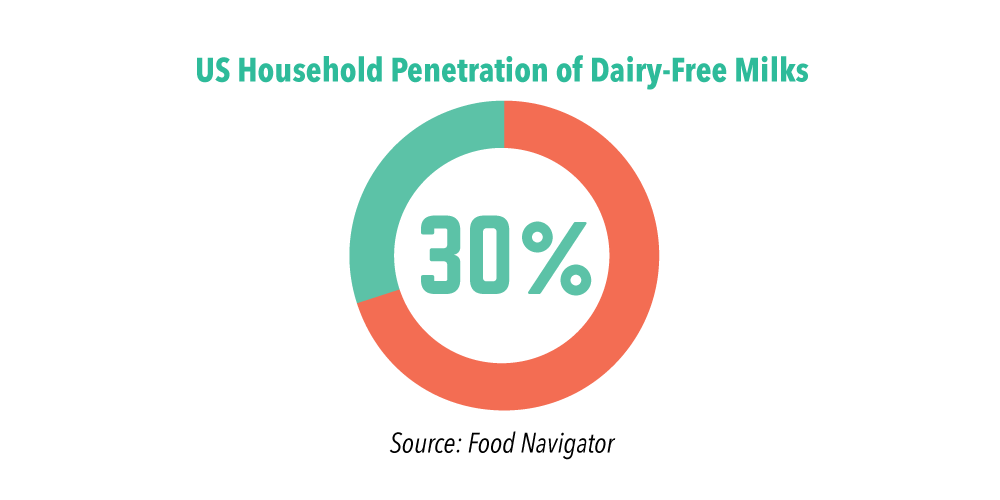 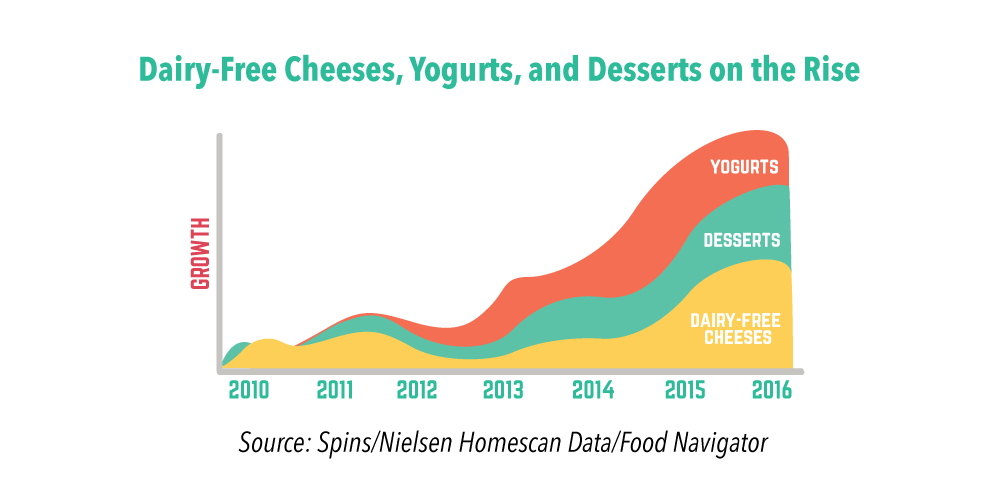 Restaurant chains have been quick to pick up on the shift towards healthier and cleaner eating, with plant-based foods at the forefront. Nearly 20 percent of restaurants offered veggie burgers in 2014, and 3.3 percent offered a black-bean burger, up from 12.2 percent and 0.8 percent, respectively, in 2006. Sales at healthy fast casual chains totaled about $39 million in 2014, up almost 30 percent from 2013. U.S. and sales in the fast-casual segment are expected to swell to $62 billion in 2019. Ikea launched an environmentally-friendly vegan meatball option in their menu, Chipotle added a vegetarian sofritas option to their menu nationwide and fast food chains like Wendy’s, Burger King, Johnny Rockets, Five Guys, and White Castle have started offering veggie burgers as well as most sit-down casual dining establishments. Taco Bell also announced an American Vegetarian Association certified menu.  Moreover, all plant-based chains like Veggie Grill and Native Foods have experienced unprecedented growth in the past few years. 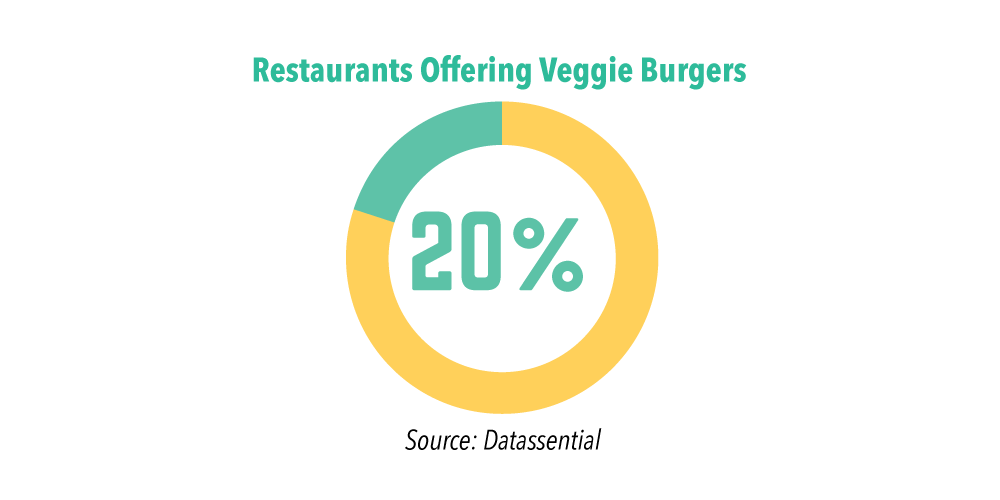 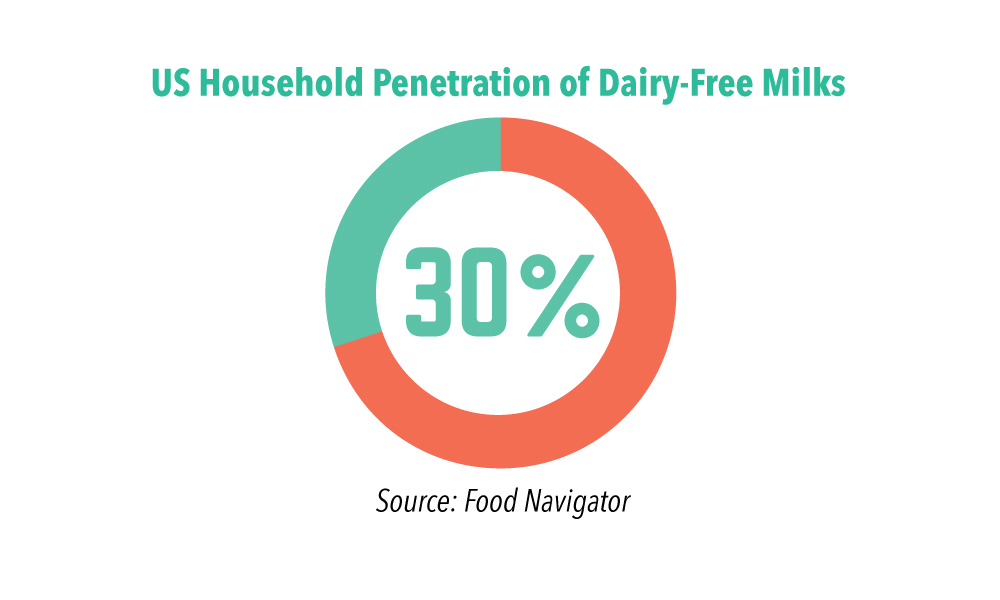