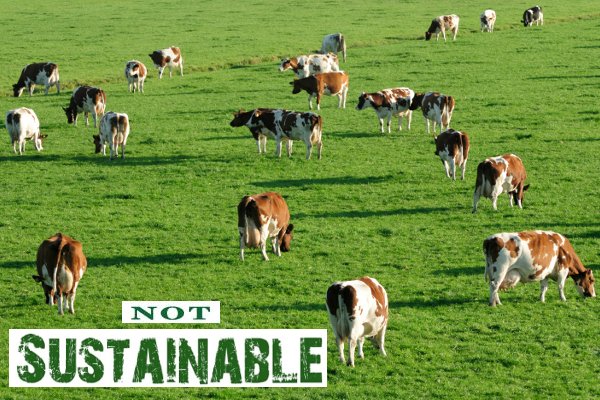 Go to any Whole Foods and you will see a variety of terminology describing a “new way” of raising farmed animals: local, organic, sustainable, free-range, etc. While it is certainly optimistic that the environmental and ethical impact of our diet has come into the collective awareness, we must pause to question how “green” this new meat really is.

While supposedly sustainable, free-range beef and dairy cows are not gobbling up as much grain, they are drinking notably more water than a factory farmed animal because they are more active. As byproducts of their metabolism, they are still producing methane and nitrous oxide, a dangerous greenhouse gas almost 300 times more potent than carbon dioxide. And it takes vast amounts of land to graze these cows, land that was once habitat to wildlife and endangered species.

Furthermore, a closer look at the production and distribution mechanisms behind self-proclaimed “local”, “sustainable”, and “free-range” animal products reveals that they are not the green superstars many in the local food movement believe them to be.

When we think of eating green, we often think of locally produced food as being the most ecological choice. Local eating is the latest eco buzz. People want to know how “green” their tomato is. Is it an island hopper with pages of stamps in its passport, or is it a down home local from the farmer’s market?

Buying and eating regionally is a principled pursuit, however few people realize that in terms of eating carbon consciously, choosing a tomato is always a better option than choosing an animal product regardless of the proximity of its production.

A study in the Journal of Environmental Science and Technology found that shifting just two meals a week from meat and dairy products to a vegan diet reduces more greenhouse gasses than buying all locally-sourced food.

It turns out there is more to assessing the ecological consequence of a food product than where it was grown or produced. The total production effect, as well as the energy and water needed to produce the product, must be taken into account.  When gauging the carbon footprint of food, transportation (or how ‘”local” the food is) is only 11 percent of the equation, while production is a stunning 83 percent (See Food-Miles and the Relative Climate Impacts of Food Choices in the United States). And animal products are incredibly intensive on production, many times more than plant foods.

Animals raised for meat, dairy, and eggs are fed soy, oats, alfalfa, and corn, among other foods. Feed crops are usually not grown locally. Even “grass-fed” cows are often fed imported grain some portion of the year. Grain that could be going directly to people is shipped for hundreds, sometimes thousands of miles to feed “local” chickens, turkeys, pigs, goats, and cows (See Future Food Production and Consumption in California Under Alternative Scenarios). This is in addition to the water and land wasted growing those grains, water the animals drink, the fossil fuel squandered on the slaughtering process, refrigeration energy costs, etc. The energy used for production of local animal products is enormous compared to the low carbon footprint of plant food.

It is impossible to allocate sufficient land to pasture-raise animals and feed the billions of people on the planet meat, dairy, and eggs. At current consumption levels, to feed all 7 billion people animal products, we have to cram farmed animals into tiny spaces and stack them on top of each other. Fifty-five billion land animals are raised and slaughtered each year world wide. They already occupy 80 percent of the Earth’s total usable arable land (See Livestock’s Long Shadow: Environmental Issues and Options). How much more can we spare?

Imagine a modern egg operation with thousands of hens crowded in a windowless warehouse occupying about an acre of land. Now imagine how much land would be needed to let all those hens have the room they need and deserve. How many acres would that take? We simply don’t have the space.

Loss of biodiversity and habitat destruction is already a considerable concern when it comes to animal agriculture.  Globally, livestock production is one of the leading causal factors in the loss of biodiversity and a key factor in loss of species. Within certain regions in the U.S., livestock grazing is the number one cause of species being federally listed as threatened or endangered (See Livestock’s Long Shadow: Environmental Issues and Options). Shifting to a diet with local animal products has the potential to increase the damage to biodiversity as more community’s open spaces would be required for free-ranging animals (See “Green” Eggs and Ham? The Myth of Sustainable Meat and the Danger of the Local by Vasile Stanescu).

In a recent interview with Joel Salatin, a sustainable animal farmer made famous in the film Food Inc. for slaughtering chickens on camera, he referred to his cows and confessed, “We move them every day from paddock to paddock and only give them access to a single spot a couple of days a year.” Wow! How many acres does he need to be “sustainable”? You may be able to feed a few hipster foodies that seek out local animal products this way, but try to feed 7 billion hungry people, with an ever increasing appetite for meat, with free-range animals. It can’t be done.  Free-range animal farming is not an ecologically viable method of food production. A global shift to a plant-based diet is the only solution to preserving our environment and having enough food to feed everyone.

I recently heard a commercial that stated, “99 percent of California farms are family farms.” This is a true statement, I’m sure, as the owners of these farms are married and perhaps have children. But many of these family farms are still large, industrial, polluting agribusinesses. “Family farms” is just another deceptive buzz word to sell products to an unsuspecting public endeavoring to make ethical choices.

The desire to eat ecologically and seek out “green” food products is a monumental step in the right direction that animal agribusiness is attempting to exploit. We need to remember that plant-based is best. Eating an organic plant-based diet is truly eating green. Adopting a vegan diet is one of the most powerful things you can do to decrease your carbon footprint, reduce suffering, and live a vibrant, healthy life.