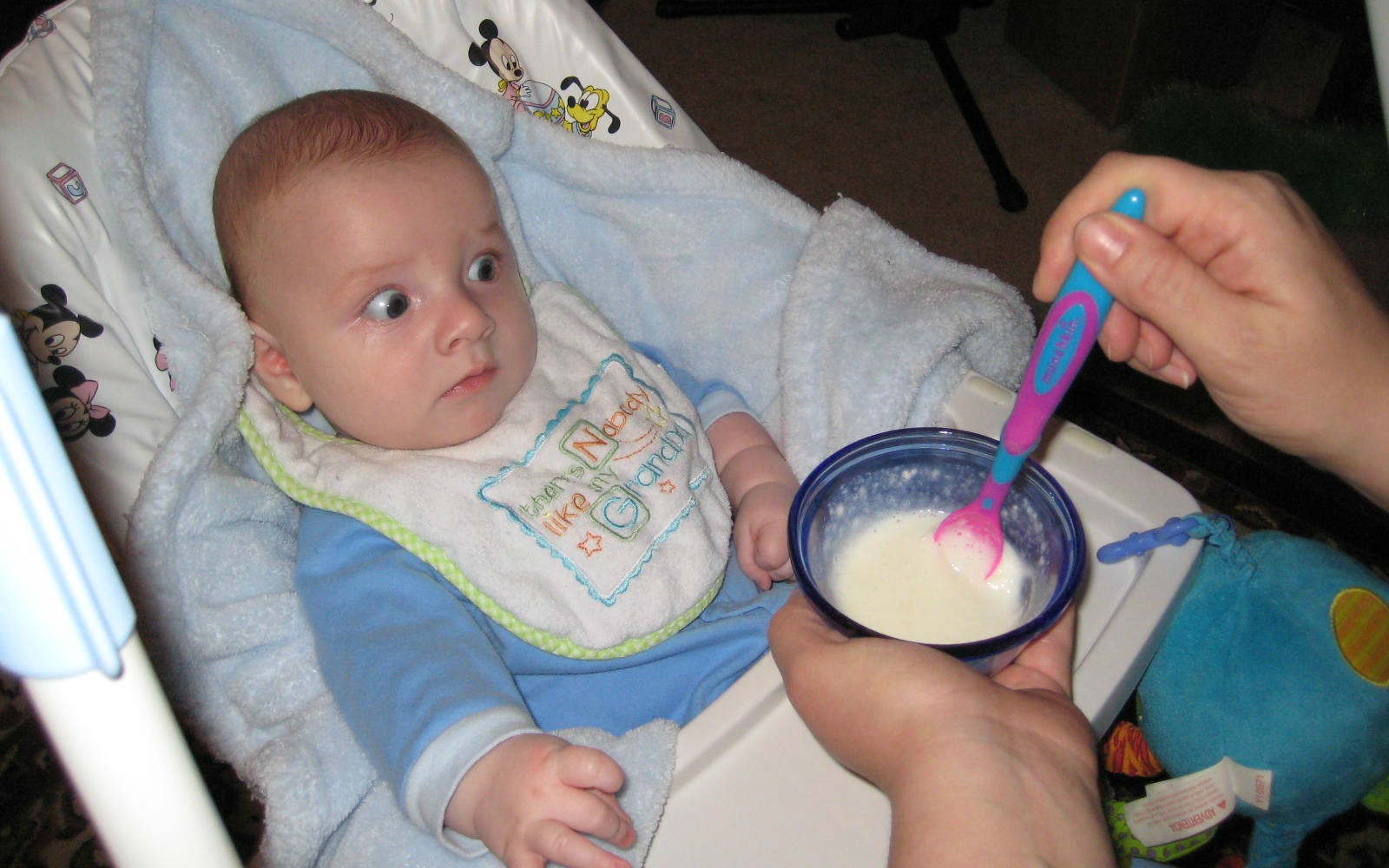 After a lifetime of (albeit, incredibly nutritious and important) mother’s milk, the various array of tastes and textures available in the world of solid foods can be a thrilling, mind-blowing experience for a baby! The foods you provide during this developmental time can influence your child’s food preferences and metabolism throughout their lives, so be sure that the solid foods you introduce to your child are as nutritious as possible. While many commercial baby foods sound wholesome and healthy, they can sometimes contain truly terrifying extra ingredients. First, be sure you avoid dairy-based formulas and dairy milk since many babies are lactose intolerant and milk is not a health food.

After dairy, here are the biggest baby food offenders to watch out for:

According to a study done by Consumer Reports, measurable amounts of arsenic, a dangerous carcinogen, were found in commercial grocery products made with rice, including rice baby cereal. The independent testing “discovered that some infant rice cereals, which are often a baby’s first solid food, had levels of inorganic arsenic at least five times more than has been found in alternatives such as oatmeal. Given our findings, we suggest limiting the consumption of rice products.” Even organic brands of rice baby cereal showed high amounts of arsenic. When buying rice for yourself or your children, be sure you’re aware of the brands you buy and buy from a trust-worthy source.

Additionally, food products containing carrots that have been heat-treated — a standard for baby foods, found high levels of the carcinogen Benzene, according to a study released by the Open Toxicology Journal.

Any commercial baby food that is not marked as Organic most certainly contains pesticide treated ingredients. The Environmental Working Group tested 8 leading brands of baby foods for pesticides using the Food and Drug Administration’s standard pesticide analytical methods. What they found were a total of 16 pesticides in the eight foods tested, “including three probable human carcinogens, five possible human carcinogens, eight neurotoxins, five pesticides that disrupt the normal functioning of the hormone system, and five pesticides that are categorized as oral toxicity category one, the most toxic designation.” What is most shocking about these findings is that while the levels of these pesticides are below federal standards, and considered safe, they are measured against standards for adult consumption levels! According to the EWG, “Federal pesticide standards do not specifically incorporate any special protections for infants or young children.”

Lead exposure in infants and children is toxic and debilitating, especially to young growing minds and bodies. Children and infants absorb lead from exposure more easily than adults, and there is no safe level of lead exposure, which makes a 2010 discovery by the FDA of trace amounts of lead in commercial baby food particularly disturbing. The Environmental Law Foundation has been fighting to get warning labels on baby foods containing lead, but no law has been passed as of yet. According to the EFL’s study of 146 national brands, including apple and grape juices and baby foods, one hundred and twenty-five samples contained levels of lead higher than the amount allowed by California’s Safe Drinking Water and Toxic Enforcement Act of 1986.

The Fluoride Action Network recommends avoiding fluoride additives in food fed to developing children and babies. According to a report by General Dentistry, dental fluorosis, resulting in white spotted, yellow, brown and/or pitted teeth, can result from excessive fluoride consumption during the first 2 years of life. Of the 360 baby food samples tested, detectable fluoride levels were found in all.

Babies and children have extremely sensitive taste buds, so the need to add additional sweetener to baby foods seems unnecessary and ludicrous. Unfortunately, a quick glance at a few commercial baby food labels will prove that it is far too common. It’s no secret that any type of processed sugar is bad for us, but it’s especially toxic for babies’ developing brains and bodies! Plenty of naturally sweet foods are available to us without the need for added sugars.

New or experienced parents are probably well aware of BPA, a dangerous chemical used to make plastic. National attention to this toxic chemical, has caused a tightening up of regulations and stricter labelling, but it can still be found in a plethora of baby toys, products and food containers. While there are some plastic food containers that are BPA free, and glass jars and other types of containers generally don’t contain BPA, traces of BPA can still be found in the lids, seals, and unfortunately, some of the plastic substitutes are almost equally as toxic. Check out the Environmental Working Groups guide to BPA for more information.

Beyond the chemicals, pesticides, lead and other dangers lurking in commercial baby foods, the food preservation techniques employed by baby food manufactures compromise the nutritional value. Foods can be treated at excessively high temperatures, with preservatives such as citric acid, sulphur dioxide, and dyes added to maintain vibrant colors while sitting on store shelves. Yuck!

The Answer? Make Your Own

Why buy over-priced, nutritionally defunct, dangerous and toxic food for your baby when you can follow these guidelines to safely and easily make healthy, nutritious baby food at home (and save money too)!

Tips for Making Your Own Baby Food:

– Keep it simple. Stick with whole, plant based foods. Remember, babies taste buds are exceptionally sensitive, and they begin with a preference for sweet, so fresh fruits, such as mangos, apples, even carrots are a great start — no need to add sweeteners to these deliciously sweet fruits! You can even cook and puree whole cereal grains, such a brown rice, oatmeal, quinoa, millet, or buckwheat. After a while, babies develop an acceptance of salty and sour foods, but you don’t need to add salt or seasonings. Slowly introduce citrus, cabbage, avocado, dark leafy greens, broccoli, potato, and other whole, plant based savory/naturally salty foods, and be sure to wait a few days between each new food to check for allergic reactions.

– Fresh is best, but when foods need to be softened before pureeing, steaming is the best option to retain nutritional value.

– Puree to begin with, then after a while and when baby is ready, switch to soft finger foods, such as cubed tofu, soft legumes, or slices of banana to help build dexterity.

– Let your child guide you. By paying attention, you’ll soon be able to tell what your baby likes and dislikes, when they are ready for solid foods, or feeding themselves. Before long, they’ll be able to help in the kitchen, and you’ll be setting them up for a lifetime of healthy food choices!