So many images, references, newspaper articles and other manifestations of the sexual politics of meat have been flooding in, that we need a moment just to see them all in one place. Warning: be prepared to be depressed or outraged or that strange combination of both that results from living in opposition to the  dominant culture! (I include the links as they were sent to me.)

Back when people had to send me these images via snail mail, I was reminded of the ephemeral nature of the ads, images, and newspaper references.  Ephemera are exactly that–here today and gone tomorrow. They were separated in time and place; a reference in a Seattle newspaper, a sculpture in Sweden, a French billboard. Part of the work of a book like “The Sexual Politics of Meat” is to show the deep cultural patterns inherent in these ephemera.

The web has changed how ephemera work; they recirculate in this medium in a timeless way, gaining imitators. But this past week we’ve seen several new entries that recirculate the basic themes of the sexual politics of meat.

* The expression of misogyny through the association of women with other animals as though they both are possessions. It’s attitudes like this t-shirt that help normalize battering. 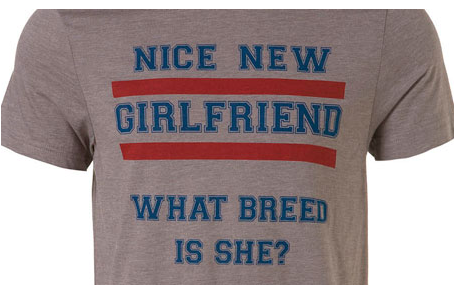 The photographer blogged about it here. One commentator suggests that this style of photography is simply the old tired “heroin chic.” Let’s call it what it really is: “sexual politics of meat chic.” Here’s my definition: 1) show woman with raw flesh (Lady Gaga can claim otherwise, but clothing oneself with a body of a dead animal accepts the culture’s dominance over animals and in many ways, lifts it up and onto women). 2) use nudity or suggestions of nudity to heighten the sexualization of dominance. 3) Show women dependent upon, or subordinate to, or lower than, a male body.

Famously, the New York Times last week celebrated eating the skin of dead chickens with a photo shoot that presented the headless chicken in a pornographic pose.

The offensive image, implying that attracting the attention of consumers of flesh is the raison d’etre of this dead animal, was soundly criticized (I wasn’t alone, but here is what I said).

Through its Lens Blogger, we learned that the photograph was supposed to be based on a Burt Reynolds image for Playgirl, not a female image. Yet everything about it reeked of misogyny: the language (a reference to the photographer’s “Pinup Chicken,” “you have a dirty mind, my friend,” the original idea was for a “languid nude,” the derivative nature of the Reynold’s pose from heterosexual male pornography, and of course, the focus of the article, on “skin.”)

Which bring us to the final image of the week. What a dress made of 3,000 cow nipples looks like: 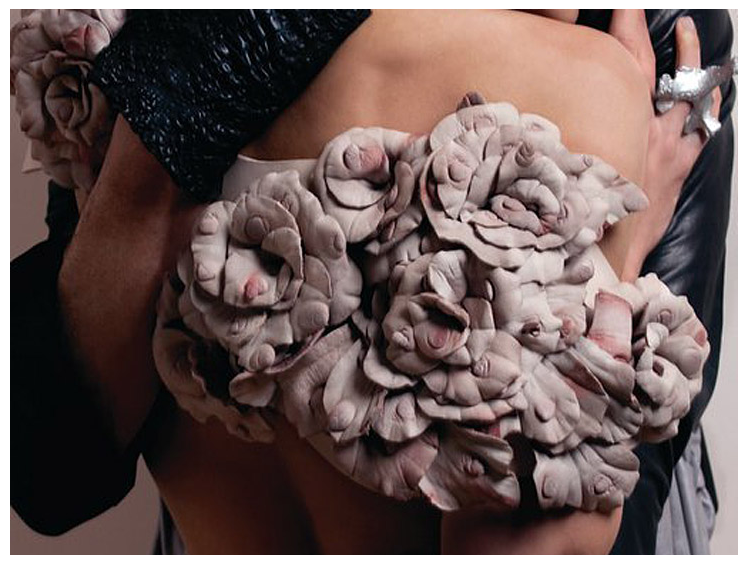 Sometimes it is okay simply to be shocked: the objectification of the reproductive aspect of a female body, the fragmentation of the nonhuman animal’s body, and the “consumption” of that body into a product–a dress. That the designer felt the need to justify what she did (she defensively insisted that the nipples were a byproduct of the leather industry which was a byproduct of the meat industry), suggests that there is a slippage going on. She was conscious that there is an ethical issue here, she just doesn’t want to attach it to leather or the use of female body parts.

The first image of the t-shirt, the only example from “popular culture” highlights how “high culture” –photography and dress design–relies so often on the same dominant attitudes of our culture as popular culture. Interestingly, it was the t-shirt that was withdrawn. The photographs and the dress? Because they are seen as art, they are greeted as creative. Why not get really creative and think outside the flesh-laden plate (and it’s byproduct the leather industry)?

Carol J. Adams is an internationally known writer, feminist, and animal rights advocate. She is the author of the groundbreaking book The Sexual Politics of Meat, released in the year 2010 in a 20th anniversary edition and translated into German, Japanese, Chinese, and Korean. She is also the author of The Pornography of Meat, Living Among Meat Eaters and several other books focusing on the links between the oppression of women and that of non-human animals, veganism, domestic violence, and sexual abuse. She is a sought-after speaker throughout North America and Europe, and has been invited to more than 100 campuses, in several countries, to show “The Sexual Politics of Meat Slide Show,” which is always being updated to include contemporary cultural representations.