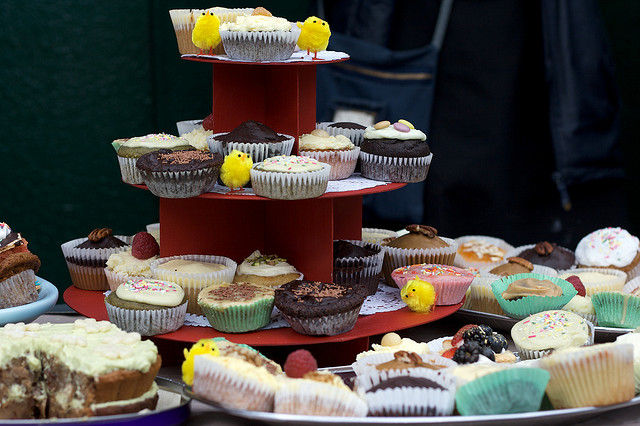 The latest trend in trade shows and expos is not for buttoned-down businesspeople. Instead, it’s for the planet-conscious and veg-curious. These days, there are Vegetarian Food Festivals (VFFs) sprouting in city after city.

These events are so much fun that they’re not just for the choir. VFFs are reeling in people who know nothing about the benefits of veganism, yet. But they learn quickly and painlessly, and some even find their mindsets changing for life.

The first mainstream VFF began in Boston in 1996. Sponsored by the non-profit Boston Vegetarian Society, the festival has by now morphed into a two-day event with 120 booths, educational exhibits on protecting animals and the environment, and nationally known speakers. “How to Eat Vegan and Healthy on $4 a Day” was just one of the lectures offered at the 2011 version in October.

On the other coast, the Vegetarians of Washington offer Vegfest in Seattle.  More than 1,000 volunteers are required to staff this extravaganza which features 500 free food samples, free health screenings, and even roving clowns for the kids. The 2012 incarnation in March will have a roster of 6 medical doctors speaking on the healthfulness of vegetarianism.

Veggie Fest in Naperville, Illinois (outside of Chicago) bills itself as the biggest VFF in the country. Here the emphasis is on spirituality as well as health. There are blood drives in addition to food drives.  The featured food is international… And the musical entertainment is too, with recent groups hailing from Dominica, Ethiopia, and Colombia. For the younger set, there are veg-themed face-painting and healthy snacks such as naturally flavored snow cones. Festival goers are also urged to “Take the Vegetarian Challenge!” and are given lists of tips and local restaurants to explore.

There are even VFFs in the south, where menus are no longer all about fried catfish and chittlins. Check out the Richmond (Virginia) Vegetarian Festival brought to you by Vegan Action and the Richmond Vegetarian Society. Here, well-behaved and leashed dogs are as welcome as human companions. Donations are collected for an animal rescue organization.  Exhibitors have included such yummy-sounding vendors as Ginger Thai Taste and Burrito Bandits.

Mosey over to Texas where there are a couple of VFFs to choose from. Dallas got into the action for the first time in 2010, but the Texas State Veggie Fair is already a staple in the community. Their tagline is “vegan fried goodness” because they feature a vegan fried food contest. Among the winners for 2011 were the Fried Pina Colada, the Chocolate Pecan Fried Pie, and the Fried Chickenless Strips. Down in Austin, the Texas Veg Fest will inaugurate in March of 2012 with the mandate to “celebrate all the benefits of a plant-based diet.”

Another relative newbie to the VFF scene is New York. The organizers couldn’t quite believe that the biggest city in America hadn’t climbed on the bandwagon before 2011. But when the New York City VFF finally did arrive this past April, it did so in a big way. The line of people waiting to get in stretched for blocks and blocks; even after waiting for 3 hours, some of them still were not able to enter. A vegan food truck called the Cinnamon Snail placated those outside, while those inside were treated to samples of faux gras and gluten-free crackers, among other tidbits. There were talks titled “Let the Doughnut Do the Talking” and “The Vegan Latina.” For the second time around, in March 2012, the hours and venue size will be doubled.

If there’s a VFF near you, check it out and invite your friends. The festivals are a perfect setting for those unfamiliar with the veg world, to try new foods, and to hear from the experts–they have nothing to lose, except their unhealthful notions.

With these events growing each year, who knew veganism could be a tourist attraction?