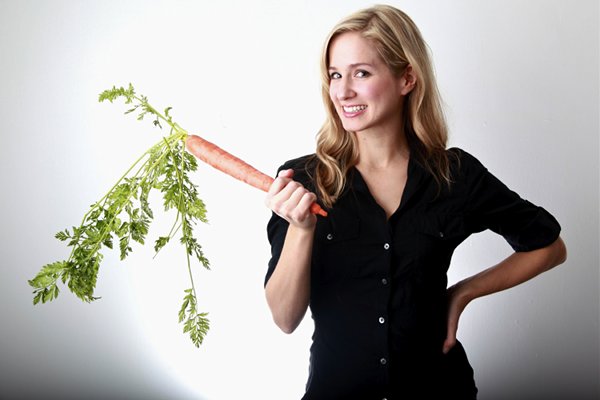 After years of screening films and doing activist outreach, Marisa Miller Wolfson has created an entertaining and effective film of her own, exploring what happens after you make the choice to go vegan. Vegucated focuses on three New Yorkers who make the leap from their meat-and-cheese loving diet to try veganism on for size for six weeks, under the guidance of Wolfson and her team. Veganism for newbies!  I spoke with Wolfson about the making of the film and what sort of impact she is seeing from the film as it screens across the globe.

Jamie Hagen : I knew you before you made a film and spent much of your time screening Peaceable Kingdom around NYC and now you are a big time film director of your own film Vegucated! I was lucky enough to attend the NYC film premier, but where else have you traveled with the film?

Marisa Miller Wolfson: It’s been so much fun and so surreal to be touring with my own film this time around. We world premiered in September at the Toronto Independent Film Festival and toured around the country for our 12-city “Let’s Get America Vegucated!” Fall 2011 Tour. We hooked up with local activists for premieres in NYC, LA, San Francisco, Berkeley, Sacramento, Dallas, Chicago, Minneapolis, DC, my hometown of Evansville, IN, plus Columbus, OH and Warrensburg, MO for film festivals.

It was a blast, but it’s nice to have some home time this year while still helping people get vegucated. Last month, we launched our community screenings campaign so people can sign up to host screenings in their city, and already local activists have held sold-out or to-capacity screenings all over the world from Albuquerque to Vancouver to Berlin. Our goal for 2012 is 500 screenings. We’re a tenth of the way there!

JH: Making an independent film is a long haul. How long have you been working on this project and what did you do to get through those arduous, sleepless nights when the finish line seemed so far in the distance?

MMW: Do I have to answer that question? [Laughs.] I had the inspiration for the film sitting in Super Size Me in 2004, and it took me a year to get some minimal monies and a crew together to start shooting. Then I worked on post-production for six years. Honestly, what kept me going was complete and total ignorance about just how long it takes and how hard it is to make a documentary. At every stage, I literally thought I had a year’s worth of work left. Ignorance is bliss!

I did have many, many moments of doubt when I wondered if I was wasting my time, but the powerful footage I had, plus the awesome film subjects-turned-friends and crew-turned-friends I got to work with kept me going. So did my obsession with the topic of teaching people about veganism.

JH: Discussing veganism with someone who is new to the lifestyle can be hefty, but I certainly think having a community of vegans or vegan-curious to commiserate with makes the experience one hundred times easier. Have you been able to provide a community for people who see the film and want to share their experiences as they make the vegan transition in their own life?

MMW: You’ve got that right! Social support is absolutely key. One perk of a film as an educational tool is that it can provide a social experience that allows for immediate discussion and support afterwards.

We’ve heard from so many people who have shown the film to others who in turn have gone vegan. I bet having the support of the vegan who introduced them to the film plays a huge role in that. Today, I heard from a woman who had friends over for a Vegucated screening, where she said the vegetarian friends who had been on the fence about going vegan tipped over to the vegan side, I’m sure partly because of the support of others there. We’re going to try to replicate these experiences by providing a community feature on our website that allows people to connect with vegan “buddies” in their area.

JH: What has been the most rewarding part of this project from the making of the film, to screenings to feedback from viewers?

MMW: The amount of support from the veg community has bowled me over, from volunteer crew to Kickstarter supporters to screening organizers. I mean, we really help each other out! And I aint’ gonna lie—it feels darn good to sit in a theater and hear sniffles and giggles coming from the audience. But the most rewarding part is hands down the emails from people who have seen the film and decided to change their lives. This is totally dorky, but I keep a Word document called “Testimonials,” in which I’ve pasted emails, tweets, and Facebook posts from people who said they saw the film and are going vegan, veg or just more veg. Reading those, all those years of hard work seem so worthwhile.

JH: What’s next for Vegucated and do you have any aspirations for future films?

MMW: We’re looking to get the DVD into more retail outlets and to have educational distribution. We’re working on the Vegucated Challenge and Community sections of our website, as mentioned before, to help people with the next steps in their veg journey. I have an idea for another documentary that will feature farm animals as the main characters, but I can’t talk about it yet. It’ll be really tough to gain the kind of access I hope to get. But hey, with this amazing community of activist helpers, anything’s possible. Guess I’ll just wait and see how it unfolds and try to enjoy the challenges and adventures along the way!

Visit the Vegucated website to learn more about the film, or buy a copy. Be sure to check out the list of screenings or consider hosting a screening of your own.