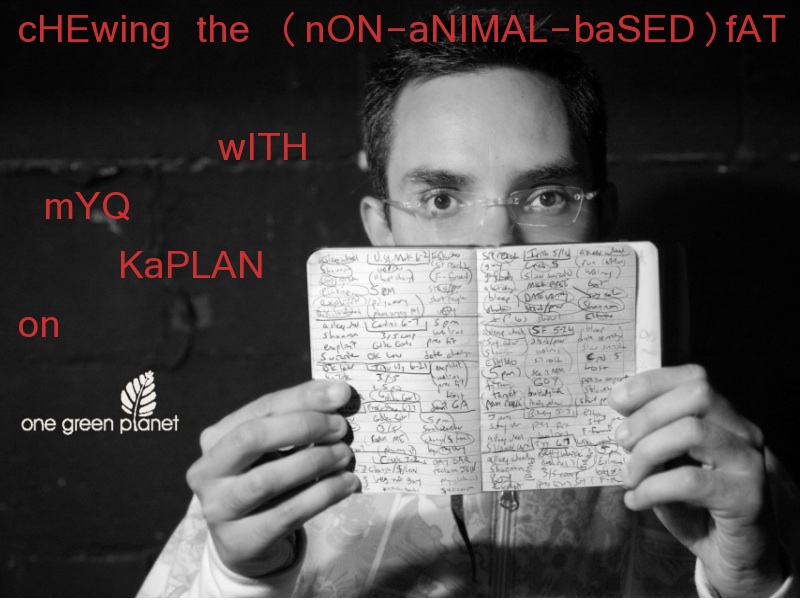 Myq Kaplan is a vegan comedian. Joe List is a non-vegan comedian. They are friends. Here is a conversation they had, about being vegan. Or not. "> Chewing the (Non-Animal-Based) Fat, with comedian Myq Kaplan...featuring comedian Joe List - One Green Planet
Food Monster App Tiny Rescue Shop Newsletter Support Us Cookbooks Petitions

Here is a conversation they had, about being vegan. Or not. <Cue scary music, and then forget to play it.>

MK: Why aren’t you a vegan?

JL: I am not a vegan because up until this very moment I never considered being a vegan. I don’t think I had ever heard the word vegan until I was 23 or something, and when I was a 23 and heard what a vegan was I probably said/thought something along the lines of ‘huh, that’s a weird thing to do’, and then never really put anymore thought into it. I grew up in a pretty close minded family as far as food was concerned. My family only eats about 6 different things; chicken, steak, burgers, spaghetti (usually with animal meatballs) and pizza. As a result almost my entire life I’ve pretty much just eaten those same things. I honestly didn’t start eating fruit and vegetables until I was probably 25 years old, that may seem crazy or exaggeratory but it’s the truth. I also just took about 8 full seconds into thinking about how to spell vegetables, I mean veggietables, no wait, how did I spell it a second ago?). However, now I do very much respect and appreciate vegans and vegetarians. Some of my dear (I worked a deer meat joke here, but came up empty…or did I?) friends are vegans and vegetarians. I respect people that don’t eat meat for the environment. I respect people that don’t eat meat for the benefit of animals. I respect people that don’t meat because they love someone that doesn’t eat meat, and so they decided to stop eating meat themselves. I appreciate and love people that take a stand and have any sort  of self discipline…. I just had parents that didn’t educate me very well in the food department, have been stubborn and closed-minded, and love the taste of meat, in addition to loving many of the vegans and vegetarians I have met….especially you.

MK: That’s very sweet. I love you, too. But this is an interview, not a loverview (which isn’t a thing), so on with the questions! Since you started eating fruits and vegetables, have you enjoyed them? Have you eaten non-meat foods that you really enjoy?

JL: I enjoy the hell out of fruits and vegetables. Fruit more than vegetables. But, yes I enjoy both very much although I still don’t eat nearly as much as I should despite my enjoyment of them. They usually involve some sort of cutting or slicing as well as picking out and going bad. Burger King and Rum never go bad. They never go good either but you don’t have to slice them up. Stop yelling at me!

MK: My apologies. Tell me more, and I won’t yell at you more.

JL: I’ve been an incredibly stubborn eater my entire life and only recently did I start trying other, healthier, even exotic-y foods. The only reason I started try more foods is I took a trip to Peru where I hiked for 6 days and had a personal chef who prepared authentic Peruvian foods that were fit to keep you in hiking condition and I felt like a douche asking him to boil me some Kraft macaroni and cheese (which I literally brought with me, but didn’t have in me to try to translate “mac and cheese please” in Spanish…Mac and Queso por favor?)) So anywho, the short answer is I grew up and lived almost my entire life closed-minded and stubborn in the food department. Furthermore, I believe I may have an unhealthy (to me and the planet) addiction to fast foods. I have to admit even though I know it’s terrible for me and the planet (which I love so much), I fucking love McDonald’s and Wendy’s and Burger King (and parentheses). I love it, I love the taste of burgers, steak, and chicken, they are some of my greatest pleasures in life, and I think I’m a self-centered person in that respect. I love my meat. However… (there probably should be another paragraph in here somewhere) (Does this have to be grammatically correct) (can there be parentheses?) (Parenthveggies) (Okay, take it easy).

MK: That is a lot of parentheses (but don’t worry, I’ll handle dividing this into paragraphs). I do understand being self-centered, and so I understand the pleasure you take in food, and imagine that you probably eat frequently, but think about this: MOST of the hours of the day, you’re spending NOT eating, mathematically. And there are other things that you take pleasure in during those times, yes? Have you thought about food being something more functional as opposed to just for pleasure’s sake? Maybe you could up the other pleasurable activities you participate in, like sleep more, do more comedy, have more sex, or do a comedy act where someone has sex with you while you’re asleep (with your permission)? (Some parts of some questions may be more serious than others.)

JL: I actually had not considered doing that until this very moment when you brought it up. I certainly will consider that now (in fact I AM considering it now, at least that’s what the implication was in my first sentence). As you know but perhaps the readers do not know, I am a person who lacks self discipline often. As I am writing this response I’m thinking in my head ‘Myq is right!’ (I’m often thinking that, sometimes even when we are not in the midsts of conversation.) I’m sitting here thinking today, I’m going to eat something healthy, something chock full of fruits and vegetables. I probably will do that and likely do it again tomorrow. But by day 3 or 4 I will likely be back to eating shit again. It’s very hard to change Myq (he’s always kicking and squirming and yelling ‘don’t touch my pants!’) (Get it?).

MK: I do get it. It’s a joke based on whether or not there is a comma between “change” and “Myq.”

JL: Anyway, based on this conversation I will try to continually make a conscious effort to use eating as a more functional activity. It certainly makes sense. As well as being a man of minimal self-discipline, I also happen to be a man who enjoys the hell out of most things in life (including fruits and vegetables now). So perhaps I can find new, healthier ways to enjoy food which will allow me to enjoy other things for a longer period of time by being healthy into my latter years…unless of course I am wiped out by a hurricane, or tornado, or blizzard due to our impending climate disaster.

MK: That sounds good. The first part, about new healthy ways, that is, not the last part, about being destroyed by the earth which you love… which brings me to this next point: I know you to care deeply about the environment, and you seem to know a lot about how the vast meat industry impacts negatively on it. Even though you think that meat is delicious, have you thought about how abstaining could help, and thus be mentally delicious? And that’s not to say that eating non-meat has to be unpleasant. But even if it’s LESS pleasant to you (which I don’t think has to be), perhaps the increased joy you get by doing something positive for a cause you believe in will more than counterbalance the negative, no? What do you think?

JL: I couldn’t agree more with this idea. You once again are correct. Was the whole point of this interview for me to tell everyone how bright and insightful you are? Or was it for me to consider what a douche I’m being? Either way it almost worked. You make an excellent point and once again, as I sit here typing I’m thinking to myself (and to you and anyone else reading this) ‘Myq is right, I need to do that!’ In fact, I stopped buying and using bottled water about 9 months ago; it makes me feel really good every day. Imagine how good I would (will) feel if I stop eating environmentally and physically damaging shit food and replace it with quality natural food! Hell, I may even be able to get erections again! (I’ve never actually had a problem getting erections…the opposite in fact…I lack self discipline). Welp, I’m off to go buy, slice, and eat some fruits and vegetables with an erection and tap water while enjoying every minute of it…can I still drink a bunch?…Captain Morgan has a new Meat Rum that just came out!…I’m kidding about two of those things, but actually plan to do all the others….I love you more now. Thank you.

MK: You’re welcome. I love you more, too. And I think rum is fine.