5 Unconventional Kinds of Yoga You Have to Try 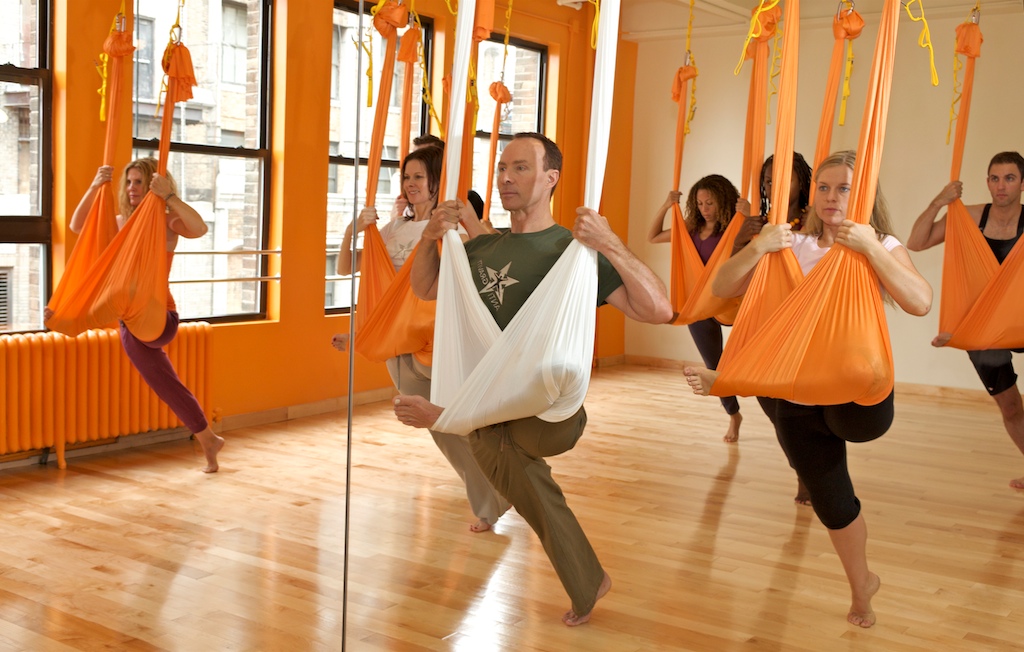 Ah, yoga. A great stretch, ultimate concentration, and a chance to center while sweating. What’s not to love?

In recent years, yoga has evolved from an ancient practice to a form of highly conventional exercise; some say the variations on yoga classes that have spun off as a result caused yoga to lose its roots, while others are glad the act of yoga in all its forms is being disseminated to all kinds of people with varying interests and athletic ability. Those in the latter group have worked to make yoga cater to every type of person, and the results lead us to a range of innovative and, sometimes, downright crazy-sounding, types of yoga classes. But, let’s think about these unconventional classes more closely, and explore them for the benefits they may hold in their ability to get all types of people interested in yoga! Here’s a look at some of the new and unconventional types of yoga cropping up across the country:

Called “doga” in some places, bringing your dog to a yoga class is all the rage in many parts of the country. The classes combine massage and meditation for both Spot and his human companion. While we can see this being potentially less-than-calming, what with the occasional doggy bark and distracted wandering puppy in the mix, this sounds like a whole lot of fun, and could be a great chance to meet some fellow dog-lovers and canine play-date partners. Some even say this type of class can seriously increase bonding with your canine companion – if you’re a pet parent who likes a good yoga class, why not try it?

Coined Budokon, this class combines the ancient arts of martial arts and yoga. That makes a whole lot of sense. Both arts require discipline, control, mind and body strength, and a whole lot of calm. The controlled movements of both arts also seem like they’d flow well into one another, and this sounds like one great workout, if you’re in yoga for the great body that often surfaces with a regular practice.

Combining acrobatics with yoga poses would probably be scoffed at by the ancient yogis of the past, but the thought of stretching the body in a soft fabric hammock and feeling weightless as we move between Warrior poses sounds downright awesome. Inversions are probably a whole lot easier when you’re suspended from the sky!

The trend of combining a yoga class with a before (or after) class meal might sound like tummy trouble waiting to happen, but the types of light foods served as part of the class typically lend themselves to yoga awesomeness. While I’m not all for the heavy pasta, wine, and chocolate mix offered up by some studios. Other types of yoga-food class combos like a pre-practice raw and healthy invigorating kombucha and a post-class vegan salad, such as what this Denver yoga studio served up recently, this makes for one great yoga experience that nourishes both mind and body. It’s also a great chance to meet people who share a love of two of the most awesome things known to man: yoga and great, healthy food!

While purposefully injecting laughter into a yoga class might sound like it defeats the purpose of the serene and calm nature of a typical yoga class, the idea is sort of awesome. Do exercises that prompt enjoyment and connection in a group of people? Yes, please! According to Laughter Yoga International, “Most laughter sessions focus on enjoyment, rather than force, when doing laughter exercises. The laughter session strives to cultivate childlike playfulness during Laughter Yoga exercises.” Adding this element to a yoga class can help the practice be that more meaningful, laughter yoga advocates say. It’s even been asserted that this type of yoga has serious health benefits: “It increases blood circulation and relaxes the muscles. It is also a powerful antidote for depression, reduces blood pressure, reduces symptoms of allergies, asthma, arthritis and helps in chronic illnesses like cancer,” says Laughter Yoga International. A far cry from the traditional no-talking-policy, serious-faced yoga class some of us know well, but may be worth a try!

While the “Om” factor of these unconventional yoga classes seems to vary, the fun factor for all of them is top notch. Consider expanding your yoga practice to include a less traditional, totally different yogic experience.