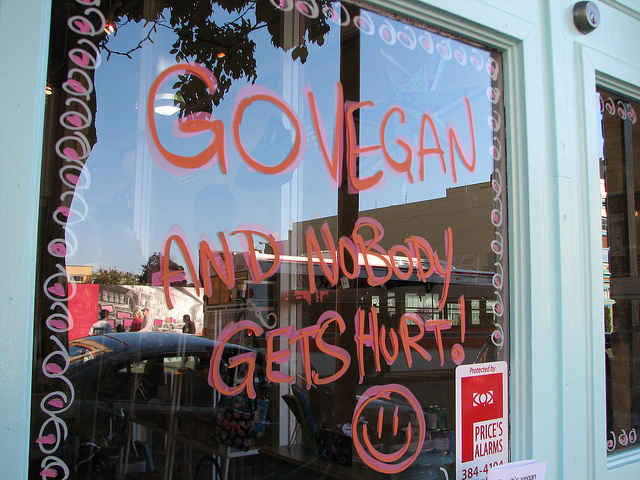 2011 has seen veganism move into the mainstream more than any other year. It has seen growing awareness of the animal rights, environmental and health arguments for veganism, a number of well-known people becoming vegan and increasing vegan options at restaurants and supermarkets.

An increase in the number of famous vegans has certainly led to greater awareness and visibility of veganism this year. This year, talk show host Ellen DeGeneres not only continued to promote veganism on her popular talk show, but she also established the website Going Vegan With Ellen and set up a vegan restaurant chain and standalone vegan restaurant.

Some celebrities have also demonstrated the health benefits of a vegan diet. The most obvious example of this is former U.S. President Bill Clinton. After eating a diet high in animal products and narrowly escaping death due to heart problems, Clinton has adopted a vegan diet and tests have shown that he is starting to reverse the damage to his heart and blood vessels caused by cardiovascular disease, has lost over nine kilograms, and claims he has more energy than before.

Clinton’s story was featured on a recent hour-long CNN documentary on heart attacks and his vegan diet success story was also featured in The New York Times, USA Today, The Los Angeles Times, Huffington Post, and the ABC – to name just a few of the endless amount of outlets that have covered this story.

The release of the documentary Forks Over Knives has also drawn attention to the health benefits of a vegan diet. This documentary ‘examines the profound claim that most, if not all, of the degenerative diseases that afflict us can be controlled, or even reversed, by rejecting animal-based and processed foods.’ This documentary has convinced celebrities like comedian Russell Brand and musician Ozzy Osbourne to adopt a vegan diet for health reasons, which has led to greater awareness of the health reasons to remove animal products from the diet.

The growing diversity of vegans, particularly famous vegans, has helped in bringing down stereotypes about veganism and is likely to have made veganism more appealing to a wider variety of people. It is not just animal advocates who are busting the myth that vegans fit some narrow stereotype, but also mainstream media outlets like Bloomberg Businessweek.

2011 has also seen growing awareness of the environmental arguments for veganism. In 2009, a study by the World Watch Institute found that animal agriculture accounts for 51% of global greenhouse gas emissions – far higher than the 18% figure cited by the United Nations in 2006. This year, the website 51percent.org was set up, increasing awareness of this statistic and the environmental reasons to give up animal products.

As the term ‘vegan’ and arguments for veganism increasingly enter the mainstream media and consciousness, it is becoming easier and easier to be a vegan. Mainstream supermarkets increasingly provide vegan staples like tofu and tempeh, as well as more “luxury” products like vegan meat substitutes and desserts, and chain restaurants as well as university cafeterias are offering more and more vegan options.

As veganism reaches the mainstream, it is important to reflect on the definition of the term. In 1944, Donald Watson began The Vegan Society and coined the term ‘vegan’ to mean a vegetarian who also avoided other animal products in their diet, such as dairy and eggs.

In 1951, the definition of veganism was extended to be far more all-encompassing than just a diet. The Vegan Society redefined veganism to mean seeking ‘to end the use of animals by man for food, commodities, work, hunting, vivisection and all other uses involving exploitation of animal life by man.’

Although some recent articles have acknowledged that veganism goes beyond diet, unfortunately it has mainly been the dietary aspect of veganism, rather than the broader philosophy and lifestyle (often referred to as ethical veganism), that have become mainstreamed.

The mainstreaming of the vegan diet is obviously a positive thing for other animals, as an overwhelming majority (often suggested to be approximately 99% in the United States) of non-human animals killed by humans are killed for food.

However, from an animal rights point of view, ethical veganism is essential. The non-human animals harmed and killed for other uses beyond food, such as entertainment, clothing and experimentation are just as important.

The concept of animal rights gives other animals inherent value and challenges the dominant idea that they are just “things” for us to use and kill for our enjoyment and profit. Ethical veganism puts this concept into practise for all non-human animals, not just those used and killed for food.

It has been great to see the term ‘vegan’ mainstreamed and normalised this year. From an animal rights point of view, it is important that the broader philosophy and lifestyle of veganism gets wider recognition in the years to come.