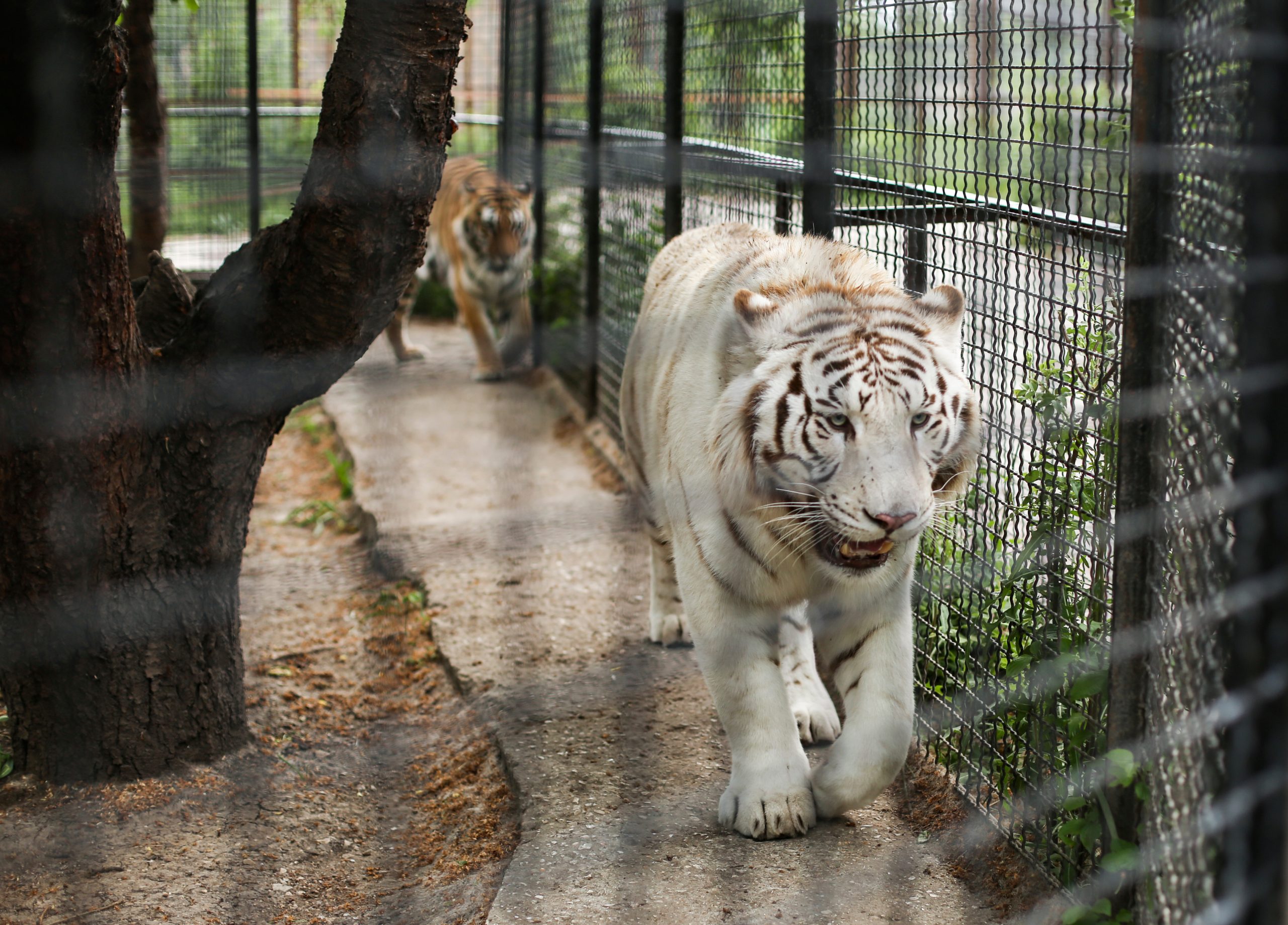 Through petitions, we can reach those in power and demand justice for others. They are valuable tools for making positive changes in the world. If you are looking for a way to help animals and humans, here are 10 petitions you should sign this week, including Remove ‘Forever Chemicals’ From Period Products, Protect Big Cats, Demand Limits on Private Jet Rides, and more!

1. Stop This Zoo From Allowing Visitors To Play Cruel Games With Their Big Cats

The Dartmoor Zoo allows visitors to pay to play, suit up with gloves and tug on a rope that passes below the cat enclosure where one of the park’s great felines has a slab of meat — tied to the rope — squarely in its jaws. This cruel game has nothing to do with conservation or educating the public but it’s all about making money. Sign this petition to help stand up for big cats Amur tiger, Dragan, and African lion, Jasiri, and tell the Dartmoor Zoo to cut the rope on this misguided attraction.

Unbelievably, It is still legal to own a pet tiger in many parts of the United States — or any big cat for that matter. The Big Cat Public Safety Act aims to address the cruel reality of keeping a wild animal in captivity. Nothing is worth the suffering that happens when big cats are kept as pets. Sign this petition to urge Congress to pass the Big Cat Public Safety Act in honor of Global Tiger Day!

3. Demand Justice for Nearly 30 Puppies and Dogs Who Were Found Bleeding

Seven dogs and 21 puppies, some just days old, were found in what can only be described as conditions straight out of a nightmare. They were found bleeding, hairless, and eating each other alive. Tragically, not one of them could be saved – every single dog and puppy had to be euthanized due to severe neglect. Sign this petition and demand that prosecutors recommend a lifetime ban on animal ownership for the person behind this horrific case of animal cruelty.

4. Ban All Animal Abusers From Living With or Owning Animals Ever Again

A puppy was found in a living situation where they were cohabiting with an extremely abusive man. When he was upset with his partner, he would lash out and hurt this poor puppy as revenge. The woman’s video clearly shows the man picking up the tiny dog and forcefully smashing it against the floor. He did this repeatedly until the puppy began bleeding from its mouth and vomiting. Even worse, it turns out this man may have actually killed a pet before – and yet somehow he was allowed to still live with an animal. Sign this petition to demand that Florida lawmakers put pets’ safety first! They must ban all animal abusers from living with or owning animals ever again.

5. Help Stop the Inhumane Killing of Cats on Kangaroo Island

The Australian government has been working to eradicate cats from Kangaroo Island through lethal methods since 2016. The government claims that cat predation is seriously depleting the population of native species. The cruelty of killing large numbers of cats is heartbreaking and must be stopped. Sign this petition to stop the Inhumane Killing of Cats on Kangaroo Island!

Kylie Jenner is receiving major backlash after her private jet was found to be taking three-minute flights. The plane has numerous luxuries and amenities. Planes like these often create much more pollution than commercial planes. People were horrified and called Kylie a “full-time climate criminal.” She was accused of bragging about “her absolute disregard for the planet.” Sign this petition to demand limits on these climate catastrophe private jet rides!

Greenway Corridor is one of the most breathtaking natural landscapes remaining in Lake County. The 12-mile corridor was once designated as a site for the now-defunct Route 53 Extension. However, now it’s a proposed destination of a state park. The park would include a continuous nature trail for walking, running, and biking; recreational amenities for kids and families. Sign this petition to add your name to the petition asking Gov. Pritzker to transfer the land to the Illinois Department of Natural Resources (IDNR) so it can be protected as a state park.

Two companies who market their products as making the menstruation process more comfortable have come under fire for containing dangerous ‘forever chemicals’ known as PFAs. Thinx and Knix do not care about the health of their customers. Sign this petition to demand that Thinx and Knix eliminate all PFAs from their products, compensate anyone who has experienced negative health consequences from their clothing/underwear, and offset the dangerous environmental impacts of using these chemicals in the past!

9. FIFA and Its Partners Should Compensate the Workers Who Built It

In 2010, FIFA awarded the 2022 World Cup tournament bid to Qatar, a country known for its labor trafficking and human rights abuses. The abused humans who are forced to work in Qatar without their consent or free will walk away with comparatively nothing. Amnesty International is calling on FIFA to match this $440 million in World Cup prize money and create a compensation program for Qatar’s abused migrant workers. Sign this petition to urge FIFA’s official World Cup corporate partners, which benefit extensively from the event, to make major contributions to the compensation program!

The U.S. Department of Agriculture’s Wildlife Services program has repeatedly been involved in instances of needlessly killing innocent wild animals like bears, wolves, mountain lions, and coyotes, all because of the powerful livestock industry. But one New Mexico county will no longer tolerate this bad behavior and has voted against renewing a contract with the USDA’s Wildlife Services, and others need to do the same. Sign this petition to ask that other New Mexico counties follow in Grant County’s footsteps and fire the U.S. Department of Agriculture’s Wildlife Services!