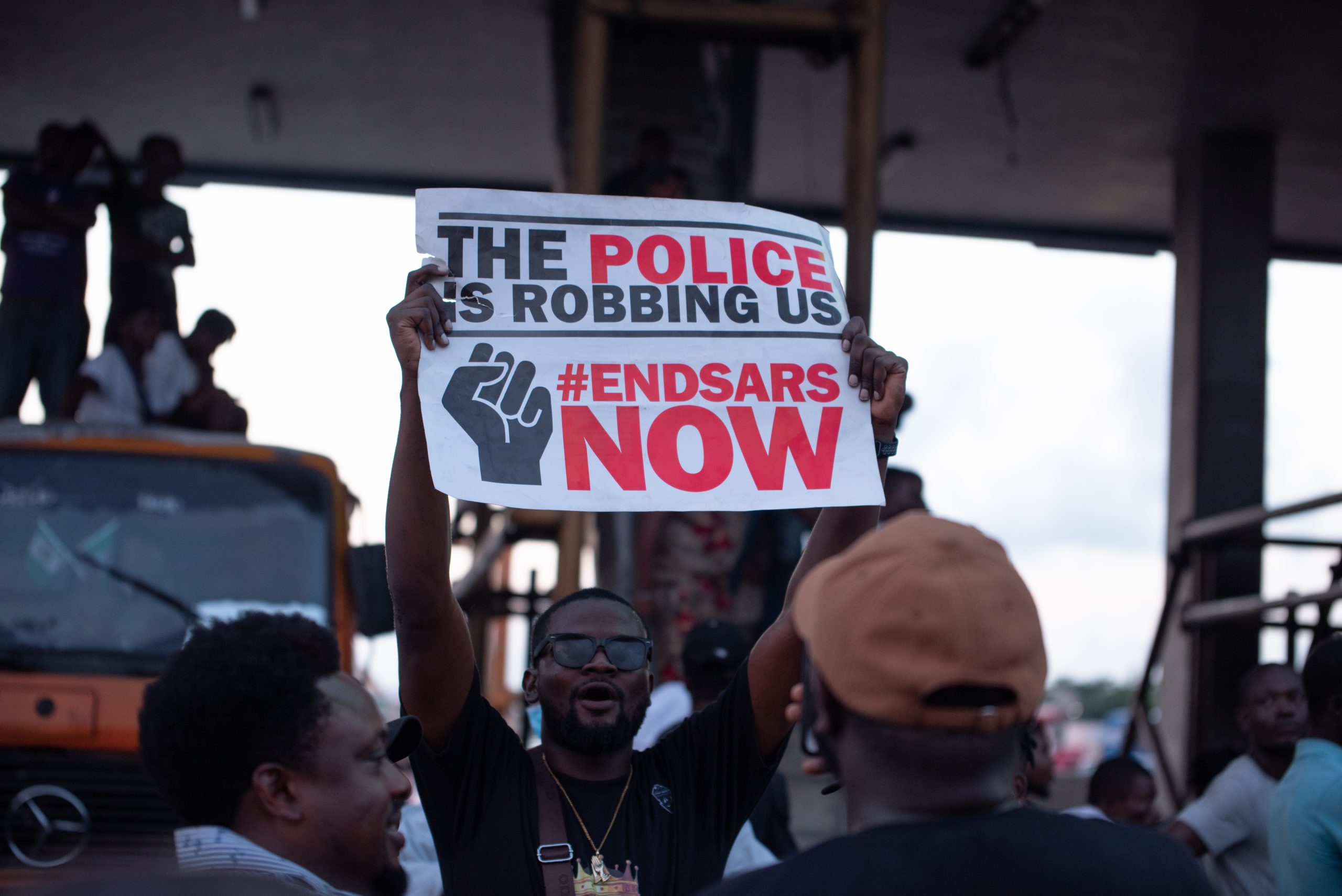 For weeks, tens of thousands of Nigerians have been protesting to demand an end to Special Anti-Robbery Squad (SARS) and an increase in accountability to stop the rampant police brutality across the country.

On Oct. 20, protestors gathered at Lekki Toll Gate in Lagos, Nigeria’s largest city, after weeks protesting police brutality across the country. Uniformed forces were deployed to the area and opened fired at the demonstrators. Streetlights and security cameras unexpectedly went out, witnesses said through social media, as gunfire lasted for hours into the night.

Amnesty International reported at least 38 Nigerians died in clashes across the country on Oct. 20. Nearly 70 people have been killed since the start of the protests on Oct. 7.

The Special Anti-Robbery Squad (SARS) was created in 1984 to combat an epidemic of violent crime including robberies, carjackings, and kidnappings. SARS became part of Nigeria’s national police strategy but operates without any form of accountability and has been accused of grave human rights abuses.

In June, Amnesty International reported that it said had documented at least 82 cases of torture, ill-treatment, and extrajudicial executions by SARS officers between January 2017 and May 2020. The organization called SARS’s actions “an absolute disregard for international human rights laws and standards.”

Nigeria has one of the most corrupt police forces in the world who have targeted young Nigerians who work in the burgeoning tech industry.

Despite verified reports showing extreme brutality, as well as years of protests calling for an end to SARS, the Nigerian government has repeatedly failed to address the problem.

The incident catalyzed thousands of Nigerians –– many of whom have firsthand experiences with SARS or seen SARS’s brutality like this before –– to take to the streets to speak out against the blatant disregard for human rights by Nigeria’s police force.

Beginning in Lagos, protests rapidly spread to 21 cities across Nigeria and celebrities from across Africa to Europe and the U.S. shared support for the movement to end SARS. Led by young Nigerians, #EndSARS protests became part of a wider global movement against police brutality.

On Oct. 12, President Muhammadu Buhari announced that the government would disband SARS “to ensure that the primary duty of the police and other law enforcement agencies remains the protection of lives and livelihood of our people.” However, the statement marks the fourth time since 2017 that the government promised to end SARS.

“You cannot announce that you have disbanded SARS but on the streets of Abuja my brothers and sisters are getting tear-gassed. People are getting injured, women are getting beaten up. That’s not how you disband SARS,” Chioma Agwuegbo, a protester in the capital, told Al Jazeera. She said demonstrators will not back down “until we see a disbandment that goes beyond a statement.”

The government then announced that SARS would be replaced with the Special Weapons and Tactics (SWAT) team which would simply continue the violence and provide no systemic change or accountability according to protestors who began using #EndSwat.

Massive protests continued across the country, including the Oct. 20 attack on Lekki Toll Gate which has been dubbed the Lekki Massacre, where at least a dozen people were killed and several more were injured.

The Feminist Coalition, a women-led NGO working to advance gender equality in Nigeria, has been at the forefront of the protests and has crowdfunded more than 37 million naira ($97,000) as of Oct. 17, Al Jazeera reported. The donations have supported medical and legal aid for protestors, food and water supplies, mental health services, and more.

Leaders of the movement have released “five demands” of the government to end SARS, release arrested activists from jail, create an independent body to oversee police conduct, evaluate and retrain officers before deployment, and increase police salary to incentivize the protection of Nigerian lives and communities.

“The protests have started to morph into a much larger critique about Nigeria, everything from police reform to security to extrajudicial killings,” Judd Devermont, director of the Africa Program at the Center for Strategic and International Studies in Washington, told The New York Times.

Driven by the young generation of Nigerians, the movement has become “a platform to talk about a host of challenges,” Devermont added.

Half of Nigeria’s population is under the age of 19. Their list of grievances goes beyond police brutality, including widespread corruption, violence, and repression. The coalescing of young Nigerians may significantly alter the social landscape of the country as well as represent a new political voice in upcoming elections.

Read more about the fight against police brutality in the U.S.