Intersection Between Animal Exploitation and Other Social Justice Issues 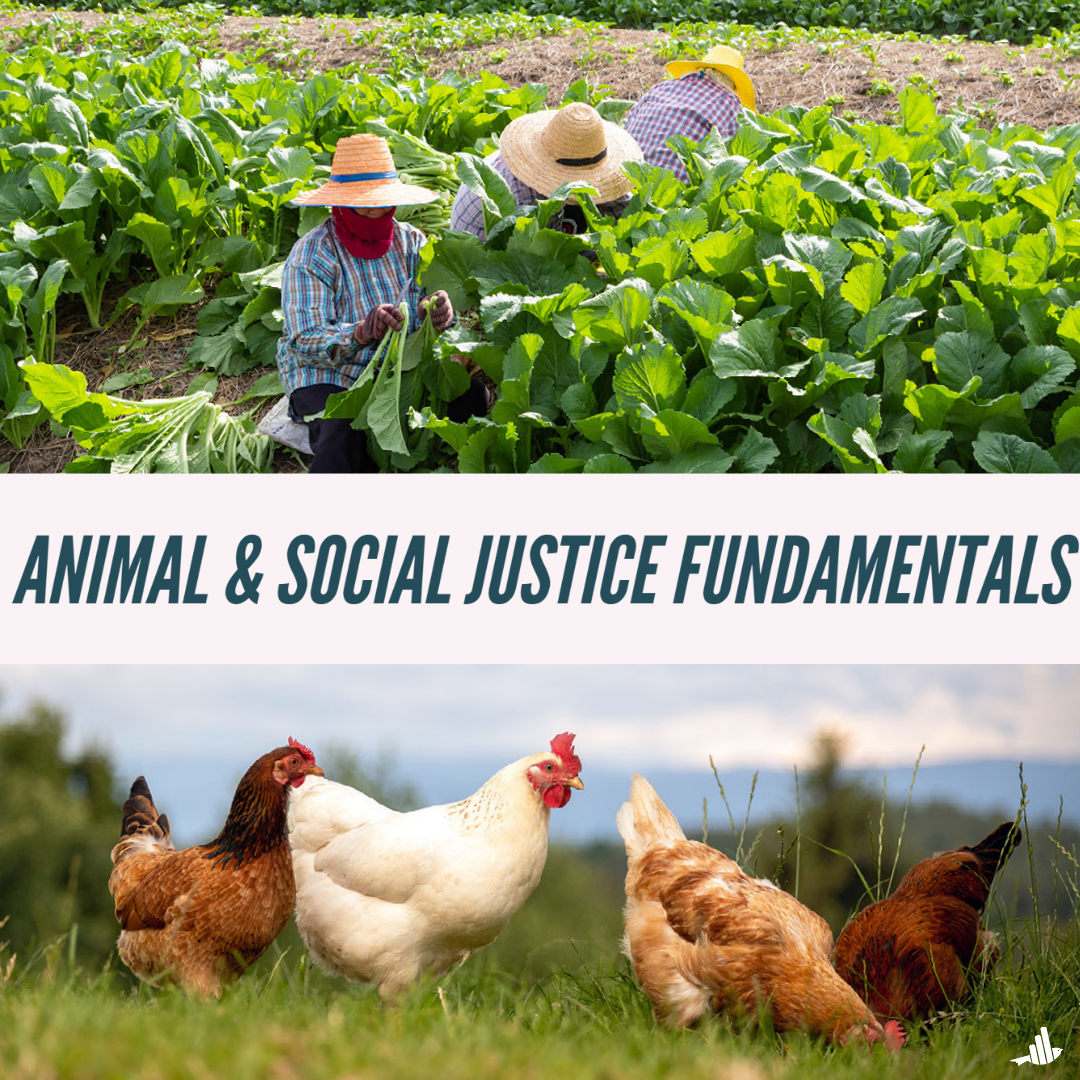 For animal advocates, our cause can often feel overwhelming. Billions of animals are slaughtered and used each year for food, clothing, entertainment, and experiments. There’s also the wild animal trade to consider and the millions of animals bred as companions and living in shelters. Because of this, animal advocacy usually becomes our primary focus. However, the world continues to face economic, gender, racial, and other social inequalities. These problems are often portrayed as separate from animal issues, making it difficult to prioritize our time.

The good news is that we don’t need to work at solving animal injustice to the exclusion of social justice issues and vice versa. Justice isn’t a zero-sum game. Animal and other social justice issues stem from the same systems of oppression as white supremacy, patriarchy, and colonialism. To create a truly just world, we can — and we must — work on animal and social justice in tandem, not separately.

In our recent Animal & Social Justice Fundamentals, we broke down some of the key issues of overlap between animal injustice and other forms of injustice in society. Below, we explore just a few of them.

There are no two ways about it: Agriculture labor is harrowing work. Like many industries stemming from capitalism, plant and animal farming hide its most brutal aspects from the public. Agriculture operates on a massive scale, and combined with the demanding conditions for farm laborers and the desire to make profits, it’s rife with labor issues.

In the U.S., recent data estimates that around 50 percent of its farmworkers are undocumented, meaning they do not have the authorization to work. This is a significant increase from around 14 percent in 1991. If there were no undocumented workers in the U.S., overall agriculture input would decline by up to $60 billion. Furthermore, an estimated 400,000 to 800,000 farmworkers are under the age of 18. Meanwhile, farm operations are excluded from working children protection laws.

Farmworkers earn nearly half the income of other U.S. workers, and their median family income has not increased since 2009. Heatstroke and crowded, dirty housing are widespread issues, and workers in grower-owned housing have their rent deducted from their already meager paychecks.

Women face especially grim conditions. They’re often given the least-desired jobs, lower paychecks, and are the first to be laid off. They face discrimination and sexual harassment, with up to 80 percent of women in the farm labor industry (and likely more) having experienced some form of sexual harassment or assault.

Perhaps it’s no surprise that more than a third of farm labor camps are hidden from public view, reducing any possible oversight.

COVID-19 brought meatpacking and slaughter operations to the forefront of the public mind. There are currently around 500,000 slaughterhouse workers in the U.S. across 800 federally-inspected facilities. About 29 percent of these workers are undocumented. Outbreaks in meatpacking plants highlighted the generally bad working conditions at these facilities and their reliance on labor from marginalized communities.

Indeed, slaughterhouses are some of the most dangerous workplaces around. In the U.S., recent estimates suggest workers are three times more likely to be injured than those in other sectors. Amputations happen, on average, twice per week, involving fingers, hands, arms, or toes. Between 2015-2017, there were around seventeen times more “severe” incidents (e.g., hospitalizations, amputations) per month in U.S. meat plants than in other sectors.

The fisheries sector is also an area of urgent concern. Forced labor and human trafficking are prevalent — many fishers are attracted to what they think are legitimate opportunities, then find themselves trapped through physical confinement, wage withholding, debts they incurred through recruitment, and threats of violence. Although data is hard to find, researchers estimate that up to 26 percent of global fishing boats exhibit a “high risk” of being slave vessels, with up to 100,000 slaves working on them globally.

The injustices of factory farming don’t end at the fences of farms. Intensive animal agriculture is especially harmful to the surrounding environment. These operations cause tremendous amounts of pollution and GHG emissions, in addition to rampant water and energy use. In turn, these harms directly impact the wider local community.

Certain communities have to shoulder a greater burden of environmental pollution than others. This is because, in many instances, a disproportionate number of factory farms are found in Black, Brown, Indigenous, and low-income communities. These communities usually have to pick up the costs of harm caused by the animal agriculture industry, demonstrating environmental racism.

Mississippi and North Carolina are two U.S. states where intensive farming largely impacts Black, Indigenous, and People of the Global Majority (BIPGM). In Mississippi, researchers found three times as many pig Confined Animal Feeding Operations in regions that were predominantly African American than in the rest of the state. Meanwhile, Sampson, Duplin, and Robeson counties in North Carolina — where the majority of residents are BIPGM — are home to the highest concentration of pig and chicken farms. The pig farms in those three counties produce 4.4 billion gallons of manure and urine annually, equivalent to over 6,000 Olympic-sized swimming pools.

If you’ve ever driven past a factory farm, you know the smell is noxious and overpowering. However, those smells can indicate serious impacts on the health and well-being of residents. What’s more, researchers who try to expose the harms of factory farms may face legal threats and other challenges from the industry and its lobby groups.

Gender, Meat, and The Movement

Animal advocacy has long had a gender problem. PETA’s famous (and now retired) “I’d Rather Go Naked” campaign earned broad critiques and was shown in some research to be both problematic and ineffective. The group continues to solicit naked models for public advocacy events.

Meanwhile, animal industries also employ strategies of sexualization and objectification when selling meat and dairy products to consumers. Their widespread use highlights some of the norms surrounding meat and masculinity across the general public. For example, two-thirds of the U.S. vegan and vegetarian population is made up of women, while meat consumption remains strongly associated with constructs of masculinity.

Gender inequities are also present in animal advocacy workplaces. Faunalytics has found that women advocates outnumber men by a ratio of 4:1, while women and non-binary advocates face more than double the rate of discrimination as men. It’s concerning that women make up a strong majority of the movement yet still face barriers in their work at significantly higher rates. Our movement has been described as “powered by women but run by men” since women do the work while men often control the funds and take credit for the outcomes. Indeed, more than 50 percent of organizations have predominantly male boards, while the top leadership of major animal advocacy organizations is mostly comprised of men.

To this day, animal advocacy is perceived as a largely white movement in Europe and North America. While the stereotype is accurate in many ways, it also erases the work of so many vegans and animal advocates of color who are part of the movement and working for both animal and human liberation. What’s more, it neglects to consider the many cultures around the world that have eaten some form of animal-free cuisine for hundreds, or thousands, of years. Contemporary advocates are reckoning with the fact that white veganism is intertwined with a colonial mindset.

The animal advocacy movement in North America is grounded in the culture it comes from, which is built on a foundation of white supremacy. This manifests itself in two key ways: first, via advocacy tactics that reinforce racialization and the “othering” of non-white people; and secondly, via an atmosphere that makes it difficult to thrive as BIPGM.

One example is how white, Western animal advocates place an undue focus on culturally-specific issues in other regions, such as dog and cat consumption in Asia. While this issue is important, many advocates fail to emphasize equally problematic issues happening in our own backyards. By framing cultural issues as “barbarism,” advocates weaponize issues in ways that may exacerbate racism. Another example is the tendency to interfere with Indigenous animal practices. Targeting hunting by Indigenous groups that have often been subjected to genocidal government policies further contributes to colonization.

The colonial, white supremacist mindset in the animal advocacy movement extends itself into the realm of basic operations and funding. In a movement increasingly focused on a particular definition of “effectiveness,” the frameworks for measuring “effectiveness” have largely excluded BIPGM organizations or those who support intersectional advocacy. Organizations have had funding pulled or threatened for acknowledging racism and white supremacy in the wake of the death of George Floyd — an unfortunate move that has historical precedent.

Being an animal advocate can be hard and demoralizing work. Being a racialized animal advocate can be even more difficult. Research from Encompass found that BIPGM advocates are 13 percent less likely to have positive experiences in their organizations than white advocates. More than half of BIPGM advocates reported having generally negative experiences in the movement as a whole, with only 7 percent reporting their time as being generally positive.

Whiteness and racialization are not the only form of inequity in the animal advocacy movement. However, according to Encompass, advocates report witnessing inequity by race at a higher rate than by any other type of inequity. If we include ethnicity and national origin as related dimensions, the importance of addressing racialization and whiteness in the movement becomes that much clearer.

Of course, animal advocates don’t just exist in Europe and North America. Our movement is global, and there are millions of advocates around the world who work hard for animals every day. Animal advocates in Western countries must embrace and support these colleagues, and most importantly, we must allow them to take the lead on issues that affect their communities.

Where Do We Go From Here?

What we’ve discussed above is by no means a comprehensive list of all of the ways that social justice and animal justice intertwine. Taking both animal and social justice issues seriously means always casting a critical eye on the ways these overlaps occur and how we can untangle the web.

There are incredible organizations such as Food Empowerment Project, Afro-Vegan Society, and A Well-Fed World, who bring a nuanced, intersectional approach to animal advocacy, whether they’re directly addressing overlapping injustices in agriculture, reaching out to often-overlooked communities, or educating fellow advocates about the importance of these issues and how they can be better allies.

There is so much more that needs to be done to incorporate a social justice lens into animal advocacy. However, with reliable, up-to-date data, we can begin to bridge knowledge gaps and find tangible solutions to make our work more holistic and just — for animals and people.