Goodbye Columbus! 10 Statues Glorifying Slavery and Confederacy That Have Been Removed Thanks to the BLM Movement! 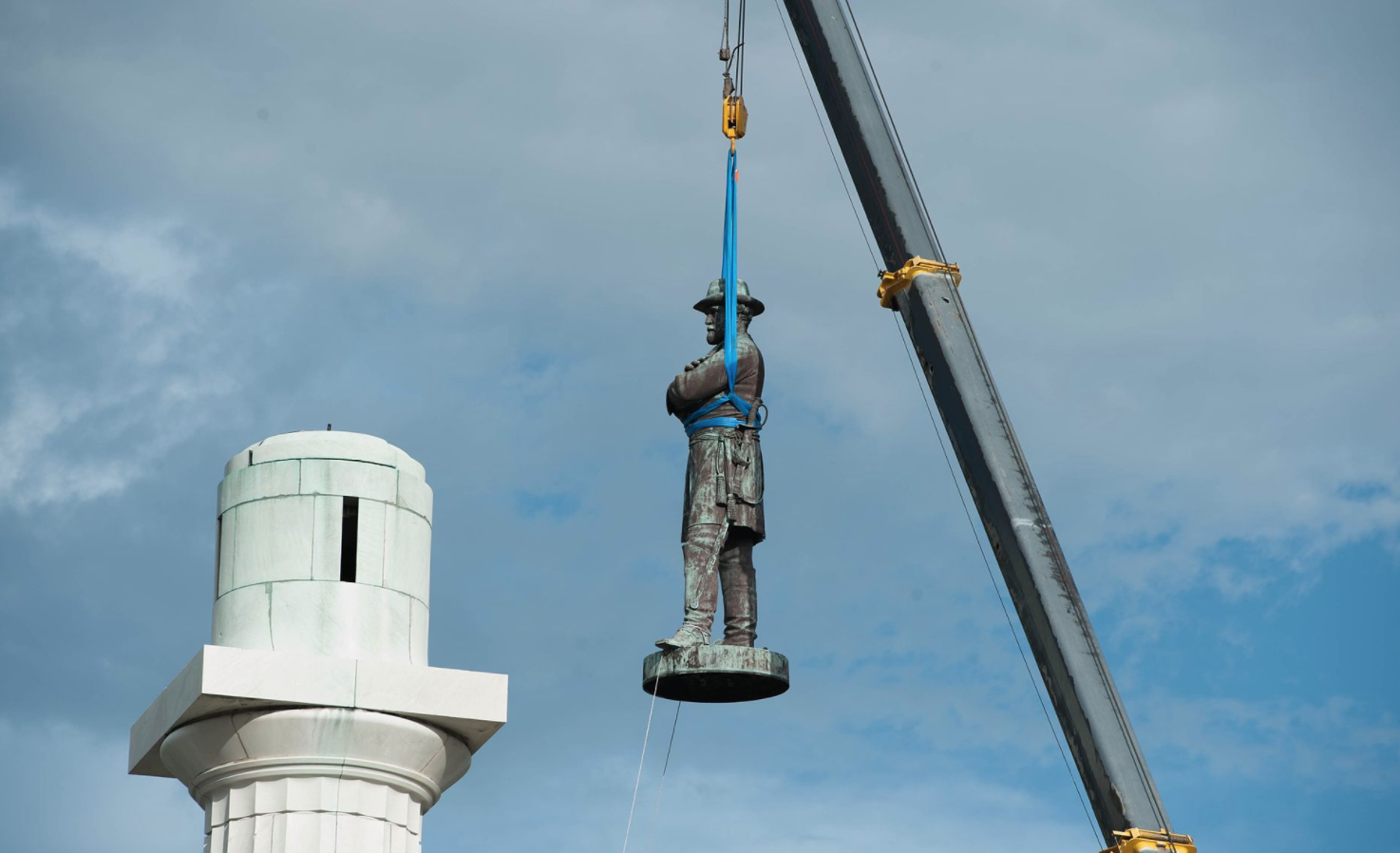 The killing of George and the nationwide protests for racial justice reignited the demand to remove statues and monuments that glorify Confederate generals, soldiers, or advocates of slavery, and that symbolize the long legacy of segregation and oppression. Protestors have defaced and toppled monuments of Confederate leaders and slave owners and various local and state leaders have also ordered the removal of these symbols.

“A real reckoning is here,” said Kirk Savage, an art historian at the University of Pittsburgh who has written extensively on Confederate imagery, in a statement to NPR. “Confederate monuments have become targets because they are powerful expressions of the brutal practices that led to Floyd’s murder; they are the artworks that gild the system.”

Here are some statues and monuments have been removed either by protestors or government officials. 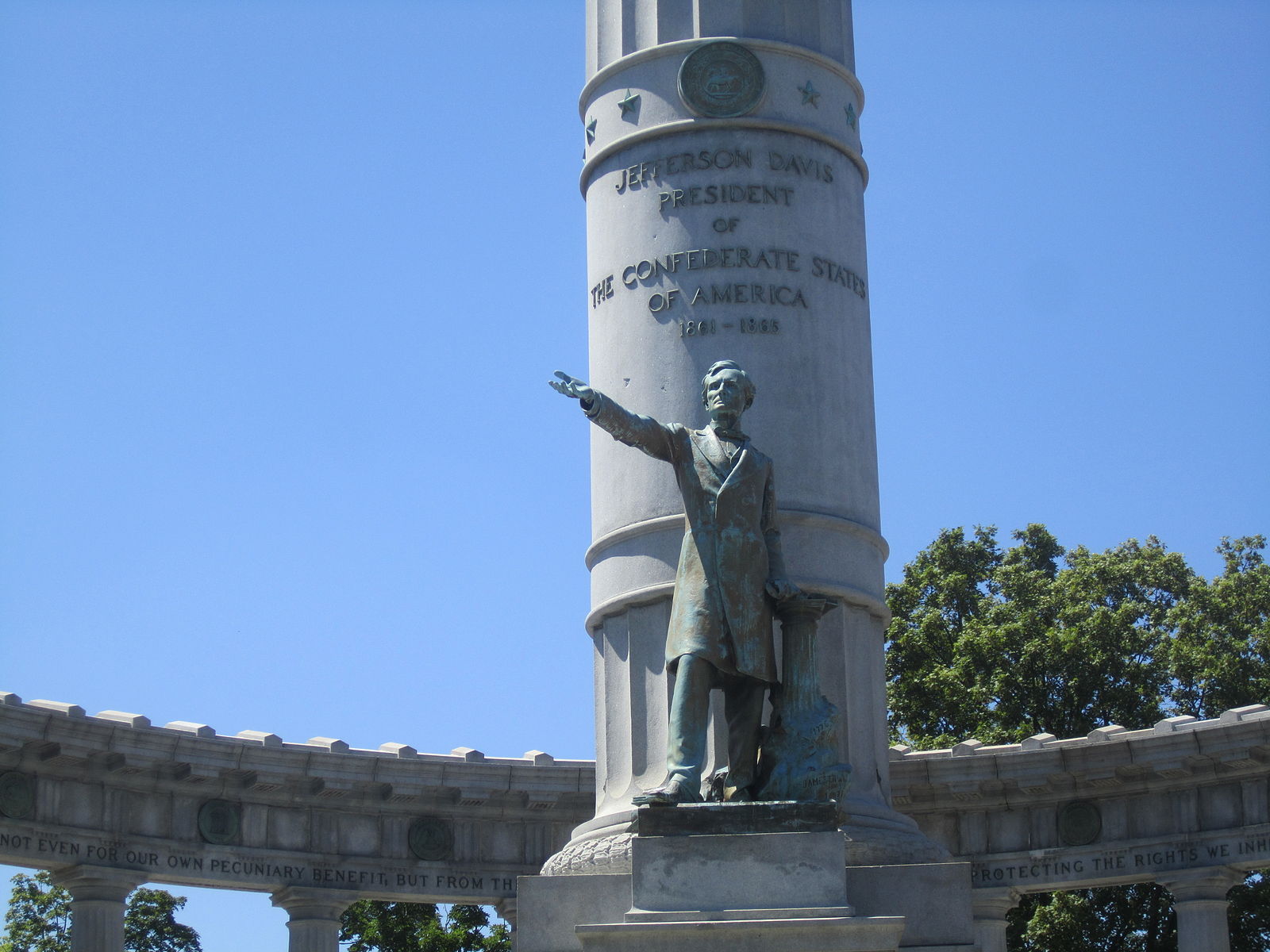 Protestors tore down a statue of Jefferson Davis in Richmond, Virginia, last month. Davis was the president of the Confederate states during the Civil War. Most recently, the Mayor of Richmond, Levar Stoney, announced a plan to rename the Jefferson Davis Highway which runs through the city. Arlington County and the city of Alexandria also changed the name of this highway to remove the reference to a Confederate leader. 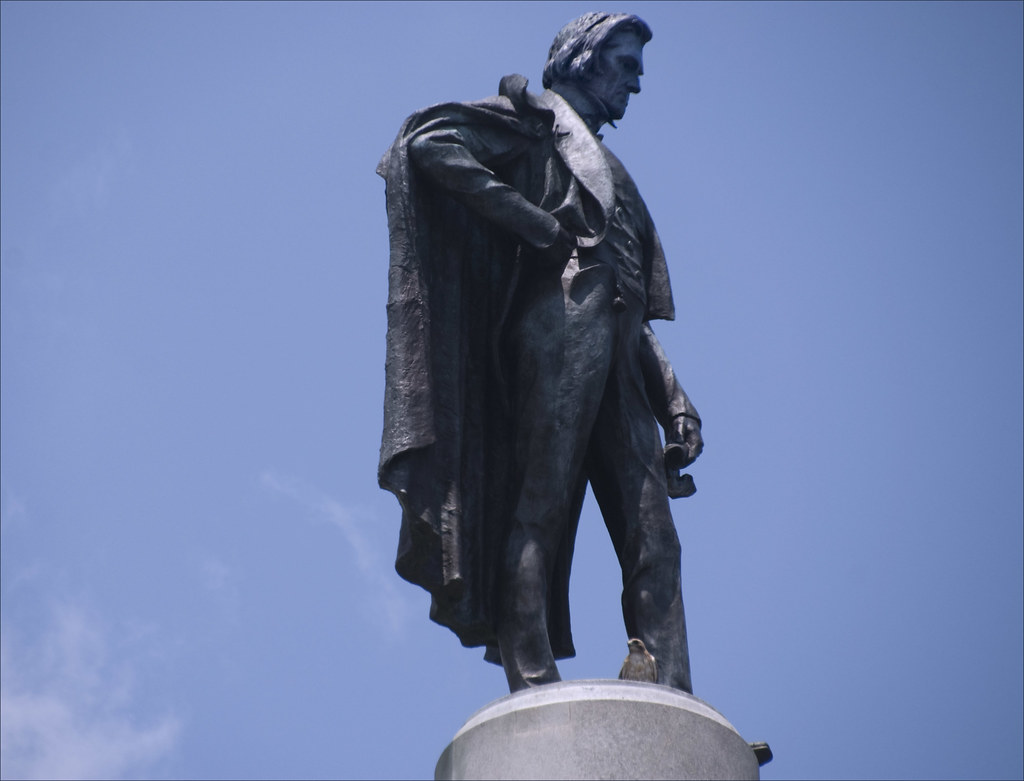 A statue of John C. Calhoun was removed from a downtown Charleston, South Carolina after Charleston City Council unanimously voted for its removal. Calhoun, a former vice president of the United States and US senator, was a strong defender of slavery and owned about 80 slaves himself. Historians have called him an ardent white supremacist.

Councilmember Peter Shahid commented, “The statue has served as a symbol of division in our community and we don’t need that,” he said. “We need symbols that unite us, that bring us together not tear us apart.” 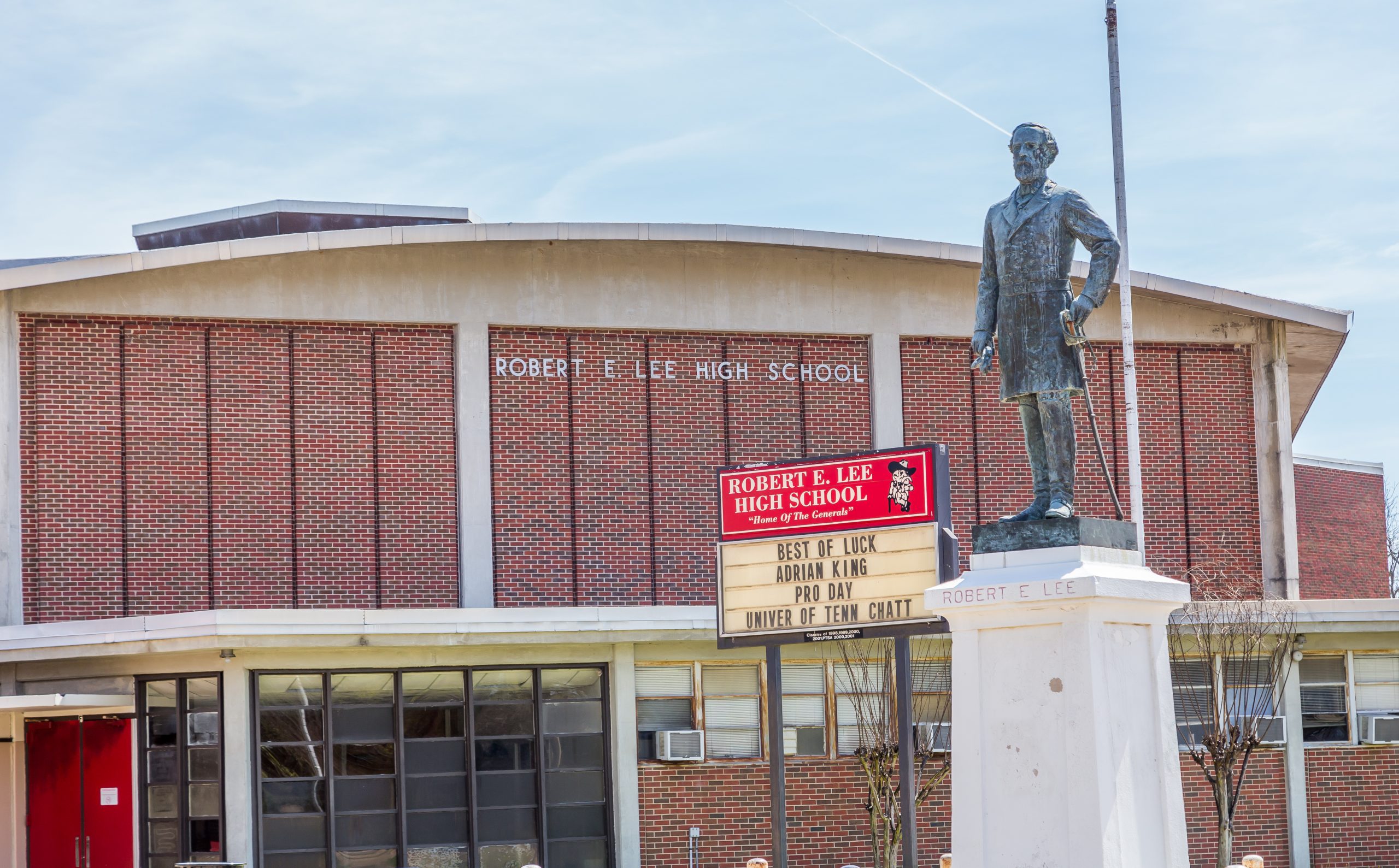 A statue of Robert E. Lee was torn down at its namesake local high school in Montgomery, Alabama, by four protesters. Robert E. Lee was a Confederate general, most famous for leading the Confederate States Army during the American Civil War. The protesters were each charged first-degree criminal mischief, but the charges were dropped.

Virginia Gov. Ralph Northam announced plans to remove the Robert E. Lee statue in Richmond but the removal has been stalled by lawsuits. 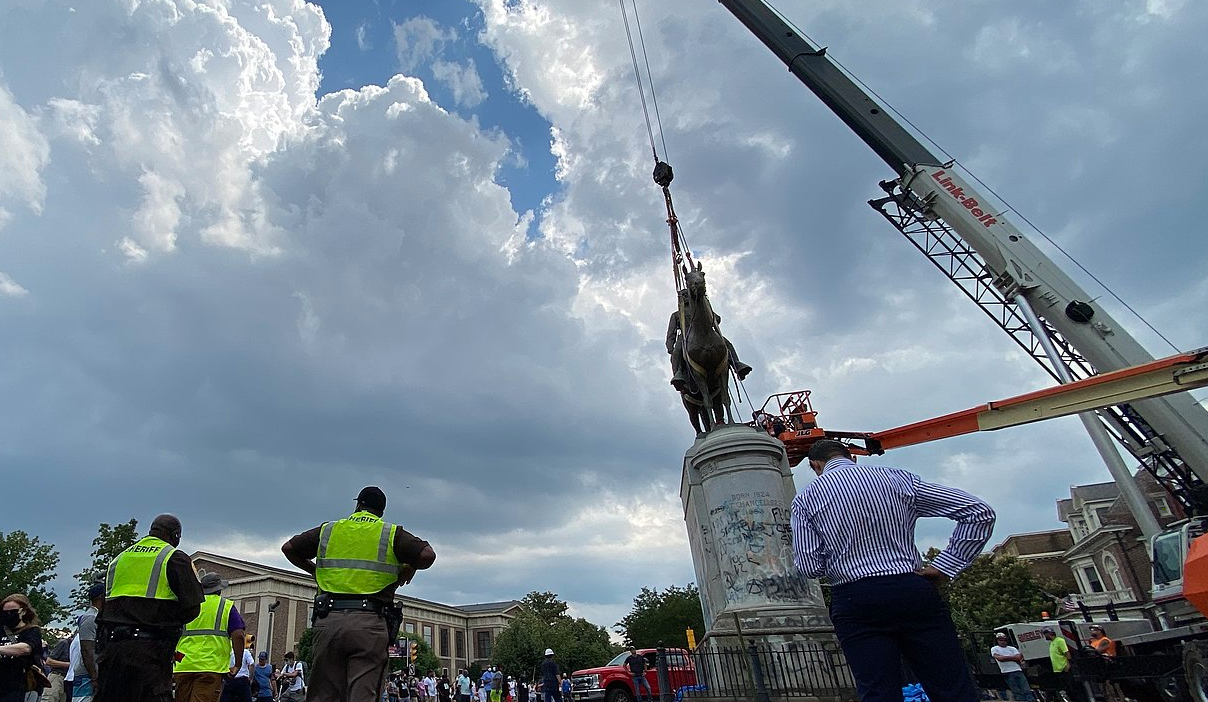 A statue of Stonewall Jackson, one of the best-known Confederate, on Richmond’s Monument Avenue, was removed after the Mayor of Richmond ordered the “immediate removal” of all Confederate monuments on city property. In addition to the passage of a Virginia law to give localities the power to remove statues and monuments, Mayor Stoney ordered the emergency removal of statues along Monument Avenue. 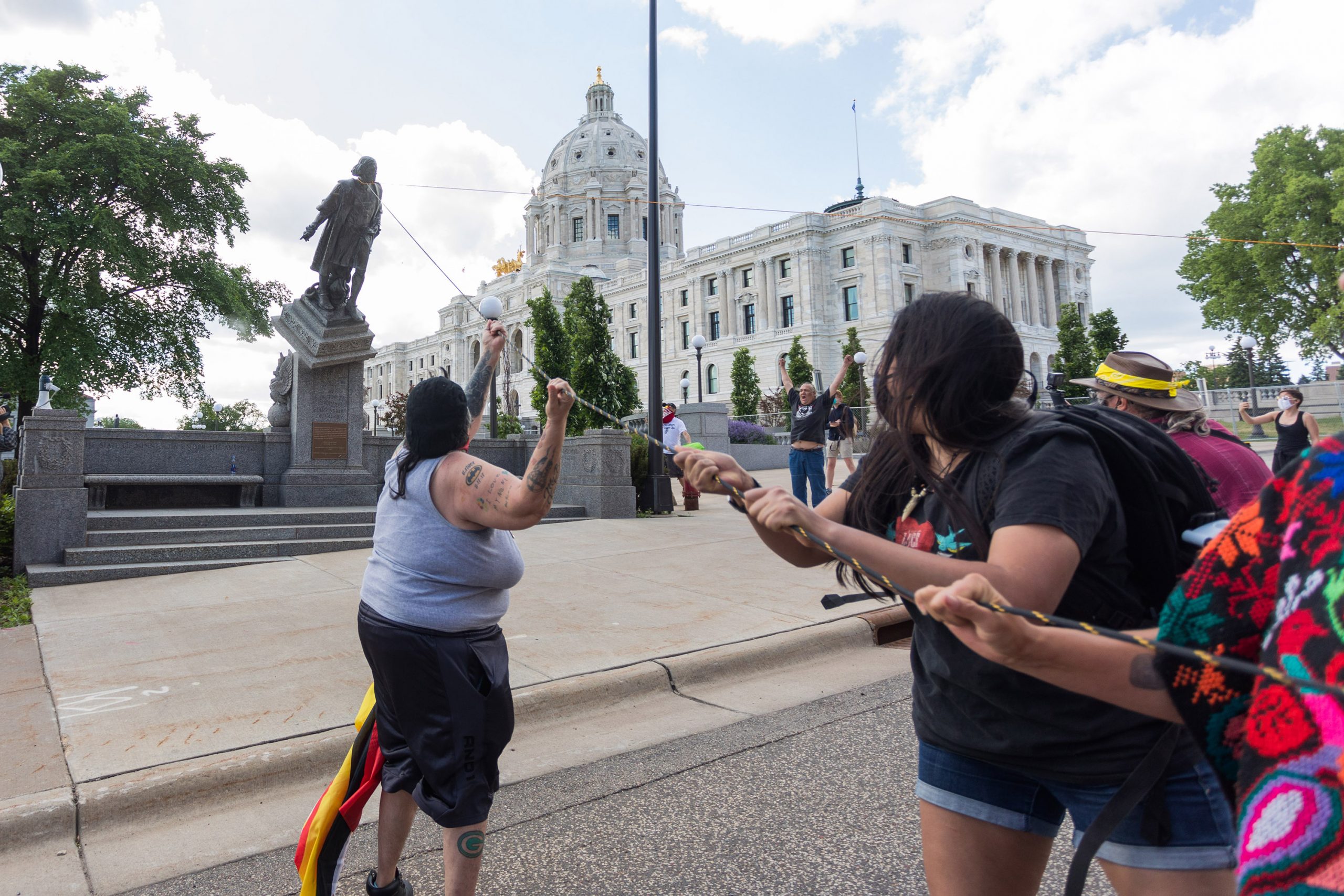 Statues of Christopher Columbus have been taken down in many cities across the country. Some have been defaced, one thrown into a lake, one beheaded, and another pulled to the ground.

Although he was not part of the Confederacy, Columbus has long been a contentious figure in history for his cruel treatment of Indigenous communities as he colonized their lands. Many cities and states have replaced Columbus Day with Indigenous Peoples’ Day, in recognition of those whose land was brutally stolen by Columbus and other European explorers. 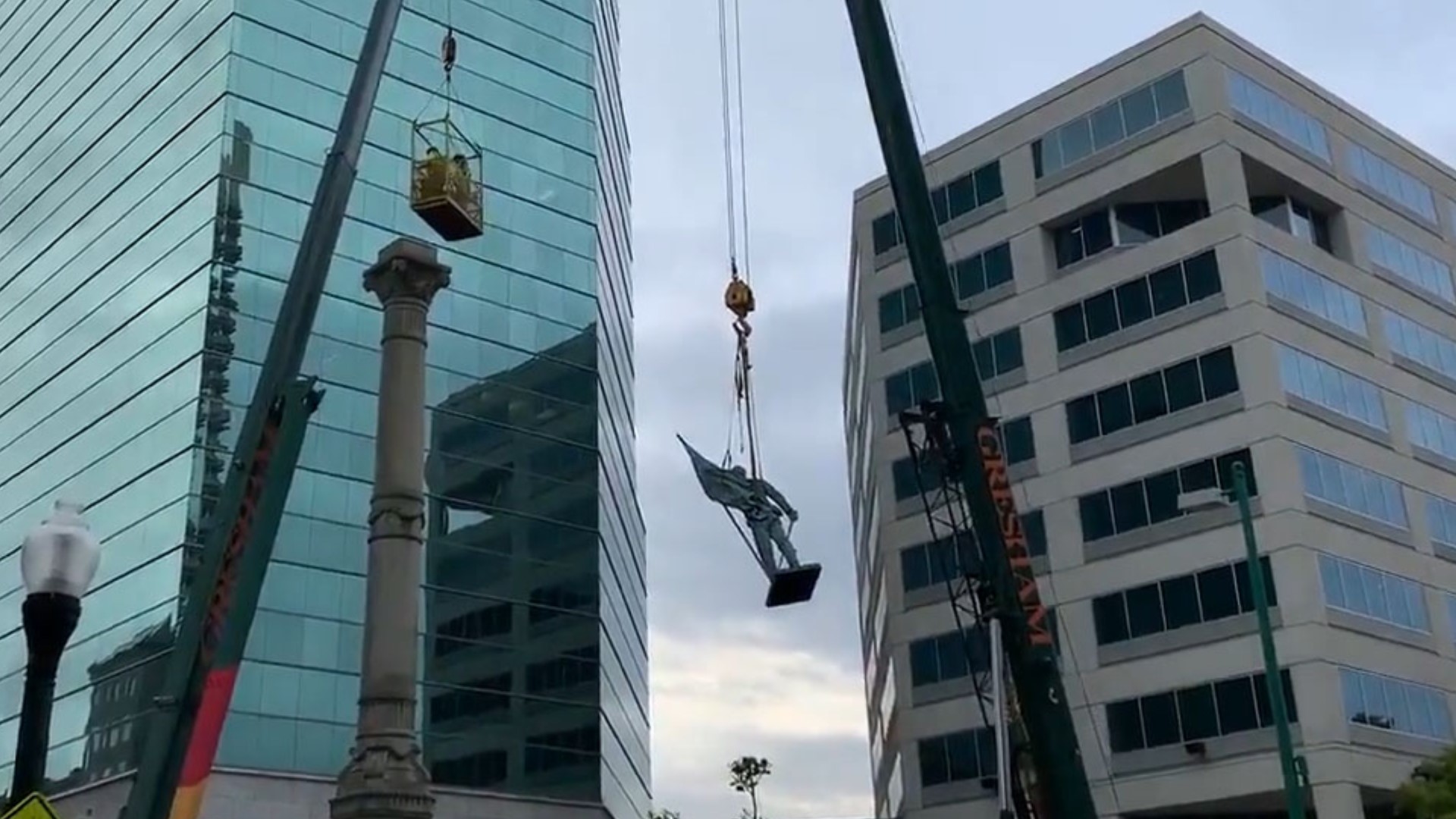 Last month, Mayor of Norfolk Virginia, Kenny Alexander, announced the removal of the “Johnny Reb” statue that has existed for more than 100 years. “Johnny Reb” is the symbolic representation of the common Confederate soldier. 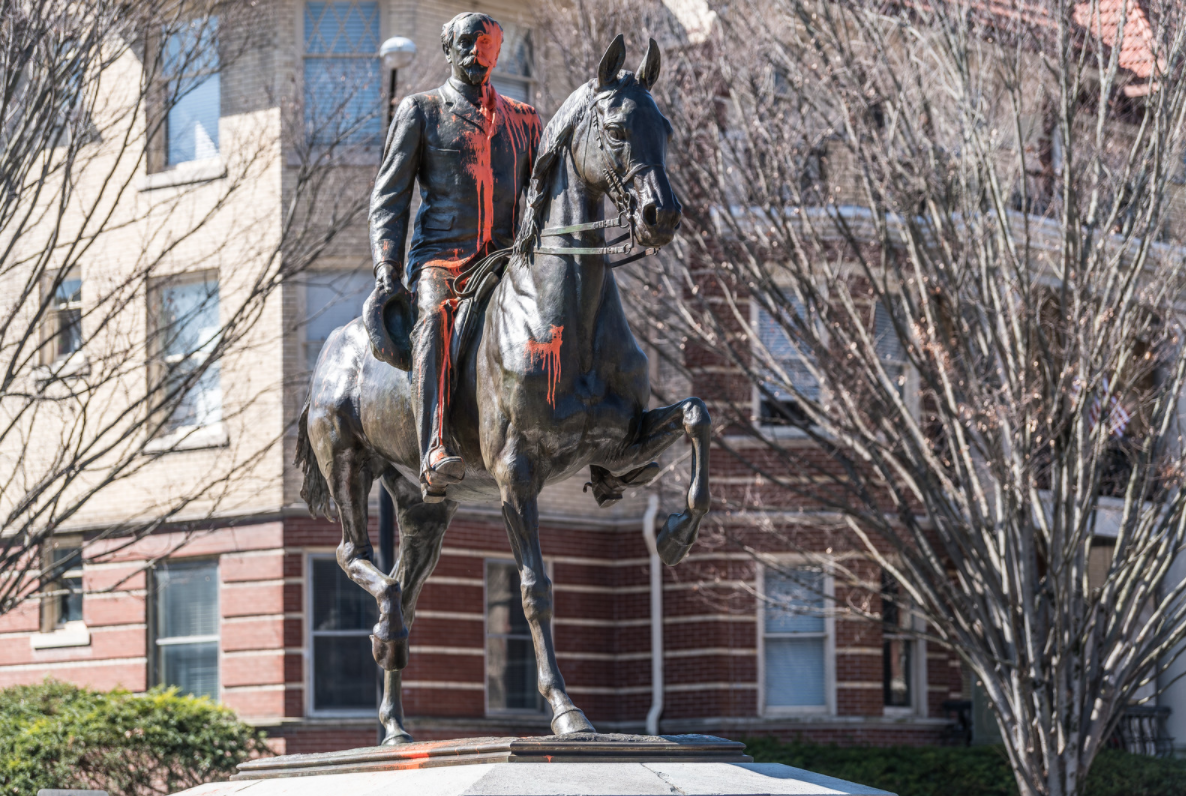 Crews in Louisville, Kentucky, took down a statue of John Breckinridge Castleman in early June. Castleman served the Confederate army and then became a general in the U.S. Army where he participated in both the Spanish-American War and the invasion of Puerto Rico. The statue also honored his contributions to the Louisville Park System; however, he ordered that park facilities be segregated. 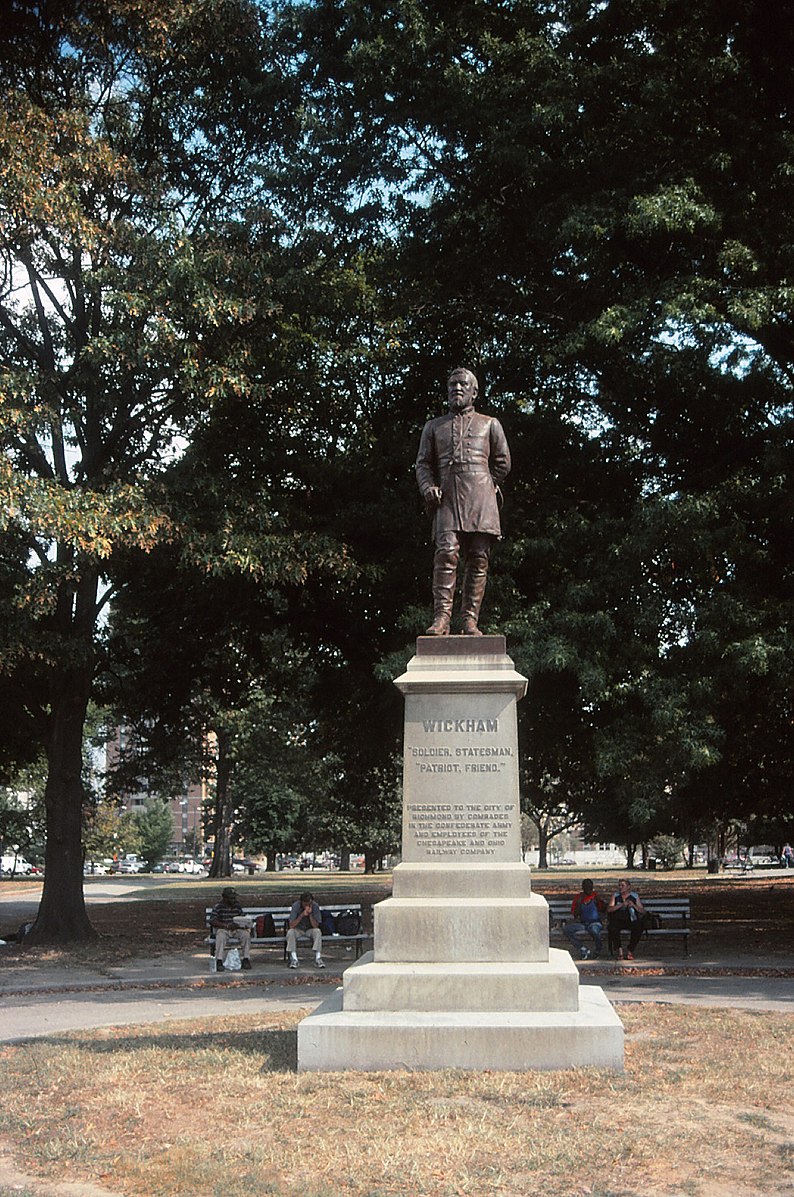 In Richmond, Virginia, protestors removed a statue of Williams Carter Wickham, a Confederate general and plantation owner. Descendants of Gen. Wickham were glad to see the statue removed, having called for its removal back in 2017, following the white supremacist rally in Charlottesville, Va. 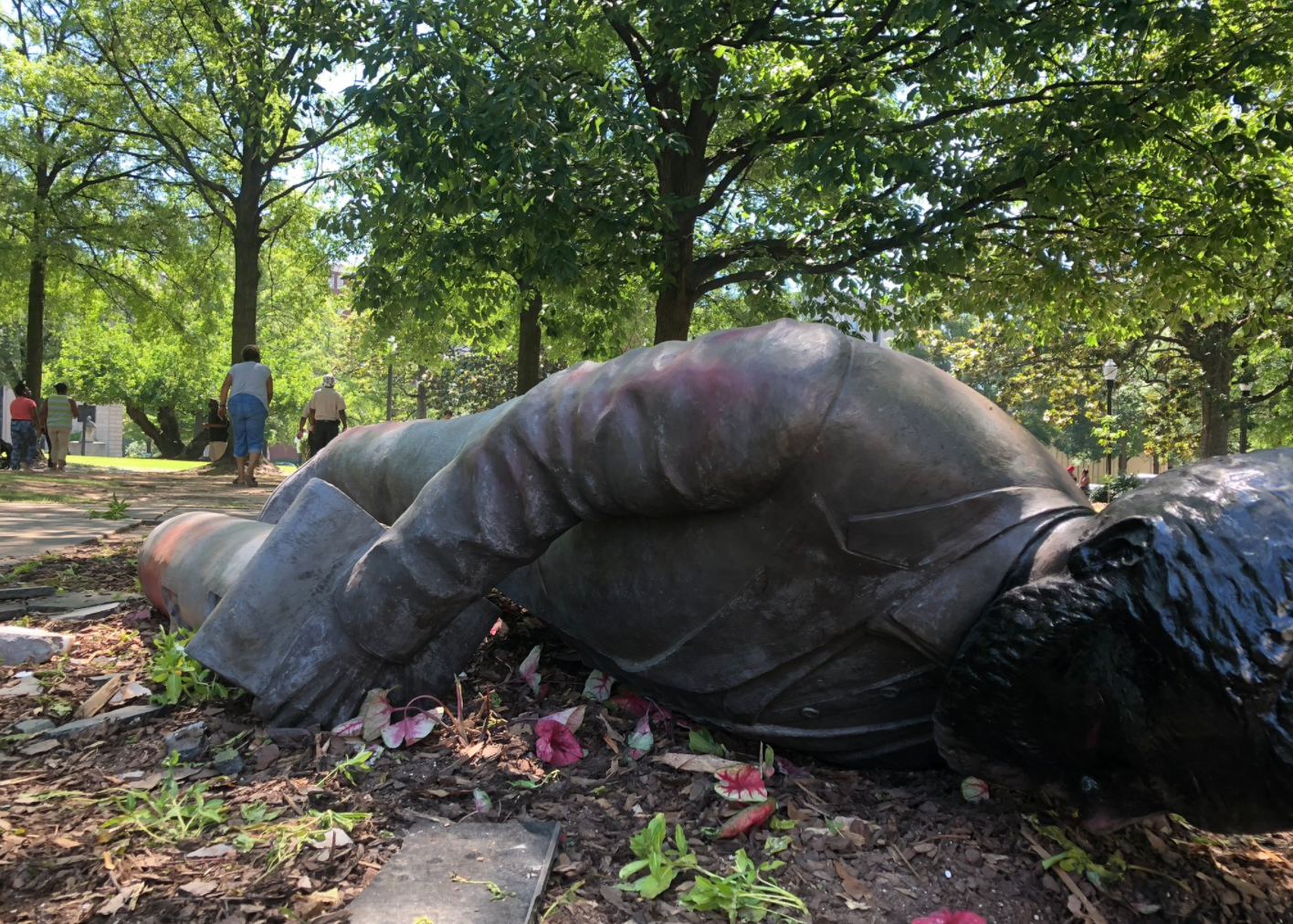 The Mayor of Birmingham, Alabama ordered the removal of a contentious Confederate statue from a public park. Protestors defaced the 115-year-old Confederate Soldiers & Sailors Monument and toppled the statue of Charles Linn, a sea captain who aided the Confederate Navy. 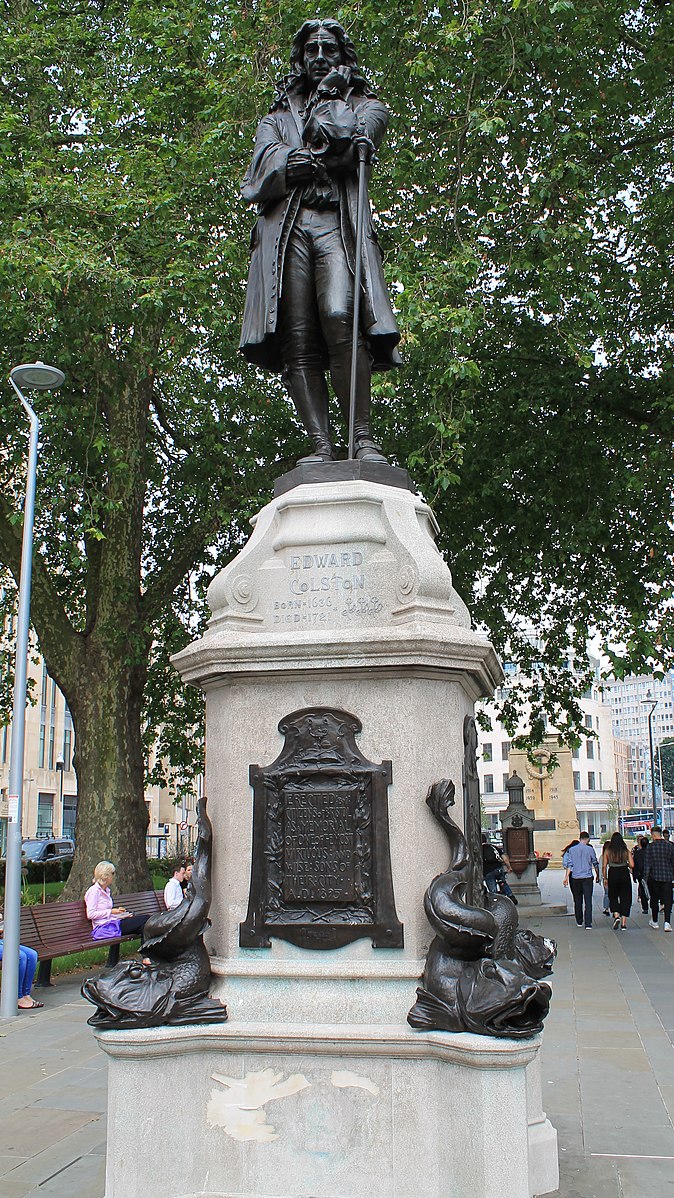 The Black Lives Matter protests spread across the globe, prompting other countries to confront their own racist monuments. UK protesters toppled a bronze statue of the 17th-century slave trader Edward Colston into Bristol Harbor on June 7th.

Colston profited off slavery, transporting at least 80,000 people from West Africa to the Caribbean. Almost 20,000 of them died on the voyages. The city has erected a new statue in its place, depicting a woman with her fist raised in a Black Power salute.

Other Statues and Monuments

Other symbols of slavery, the Confederacy, and racial oppression have been removed in recent months including a statue of Confederate Admiral Raphael Semmes in Mobile, Ala., a slave auction block in Fredericksburg, Va., a statue of Philip Schuyler in Albany, NY, and many more.

The Southern Poverty Law Center has identified 1,747 Confederate monuments, place names, and other symbols across the country. While recent protests have targeted some of these symbols, statues and monuments of prominent figures in U.S. history remain. For example, protesters tried but failed to pull down a statue of President Andrew Jackson––the seventh president and slave owner who led a massacre against Native Americans––near the White House after police officers came and pepper-sprayed protestors. More work needs to be done to confront the long legacy of slavery and racism in this country.

Sign this petition to Rename the Edmund Pettus Bridge for John Lewis!

Sign these petitions to remove Confederate flags and symbols of racism and oppression from public institutions across the country.