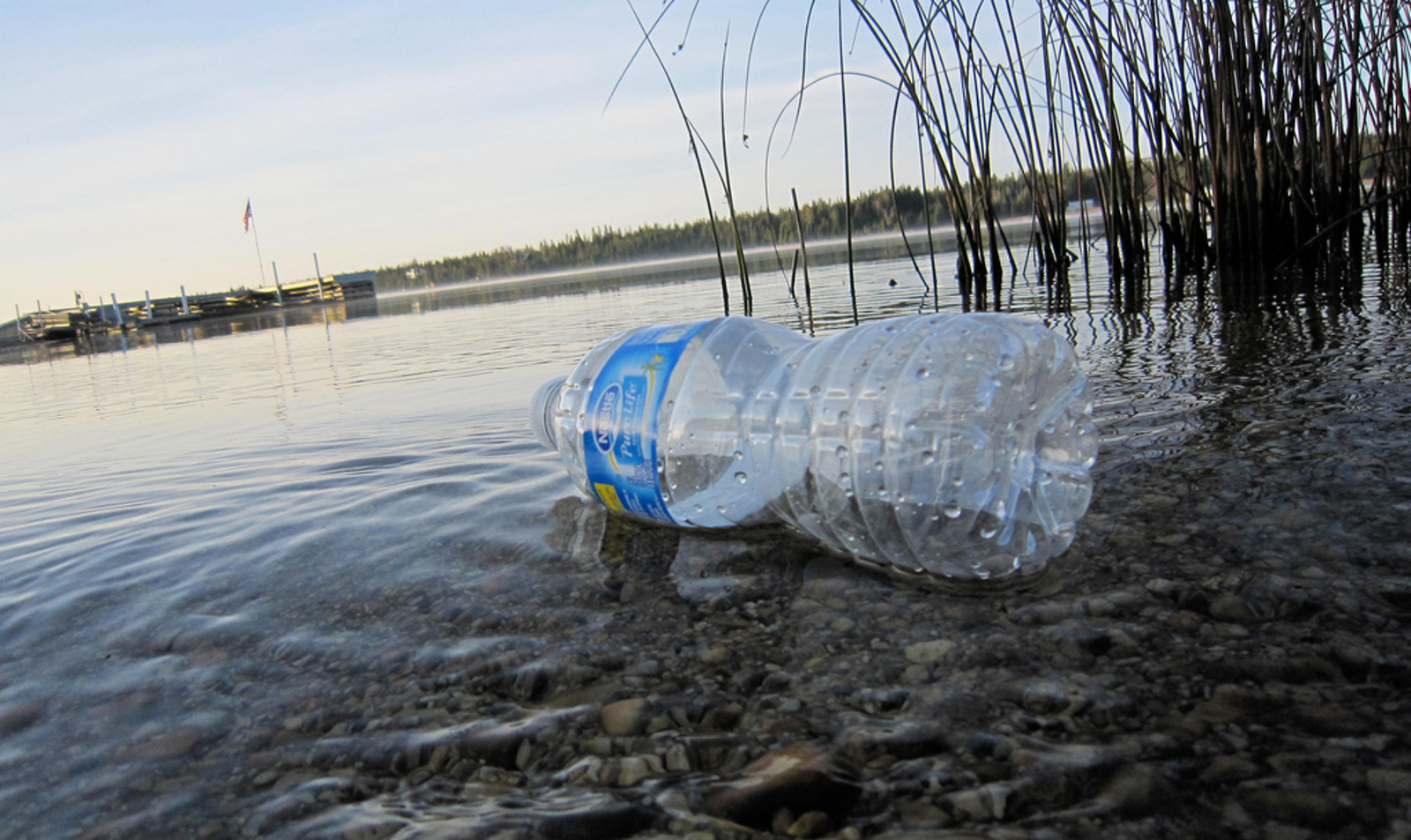 There are many reasons why bottled water is drawing criticism lately. From the incredible amount of plastic pollution that stems from mismanaged plastic water bottles, to the threat of hazardous chemicals leaching from the plastic, to the controversial water harvesting practices of some bottled water companies, to the fact that bottled water is no healthier than tap water, the practice of bottling water is definitely not popular with many crowds.

And while bottled water may serve a degree of reliability in times of natural disaster or compromised water service, the widespread embrace of this $100 billion industry on a daily basis is just not as convenient or healthy as some companies have it cracked up to be. In fact, it’s proving to be anything but convenient or healthy for wildlife. If you care about birds, fish, insects, and any number of other creatures, this is one industry you won’t want to be supporting any longer. From the harvest of water by bottling companies to the manufacture and eventual disposal of plastic bottles, bottled water is truly a danger to wildlife all over the planet.

There are some possible sources of water that bottling companies may elect to use. There are municipal sources where the water comes from the tap, essentially, and accounts for roughly 55 percent of the bottled water available for purchase. Natural sources make up the other supply line and are often referred to in the industry as “spring water.” Some companies choose to add minerals or electrolytes or put the water through various filtration and treatment systems. No matter the source or manipulation of the water, one fact remains: bottled water companies are removing water from a location where it is needed to sell it elsewhere.

Nestlé is one particular company that has gained a lot of bad press lately over its theft of water in drought-ridden California. The state of California has been experiencing an inconceivable drought over recent years. In fact, the span of time from 2012 to 2014 was the driest three-year period in the state’s recorded history! Yet, despite the state’s dire straights, Nestlé continues to operate a pumping operation that extracts 1.9 million gallons of water every single day from San Bernadino National Park because the National Parks Service has allowed them to operate under an expired permit for the past two decades!

Sadly, Nestlé is only one example out of many other companies who carry out similar business.

In the midst of all this water usage, wildlife is poised to take a hit from the water theft that bottling companies like Nestlé, Starbucks, and Wal-Mart are able to practice. In California, the drought is proving harmful to ecosystems from marshes that house endemic species, to forests where trees are dying out in the millions. With their habitat compromised, animals large and small can’t be expected to thrive in such harsh conditions. The drought is also destructive to migration patterns of waterfowl that depend on wetlands during their travel. While bottled water companies may not be the single cause of the drought in California, the fact that they are able to continue to exploit dwindling water supplies and harm wildlife in the process is appalling.

It isn’t just the harvesting of water that makes bottled water dangerous to wildlife – it’s also the manufacturing of the plastic bottles themselves that are so disastrous. Plastic bottles require oil for manufacturing, an increasingly inconvenient fact. On an annual basis, Americans alone demand 17 million barrels of oil to produce plastic water bottles. Unfortunately, more drilling is needed from year to year to continue to meet this demand as the PET bottles typically used cannot be converted into other plastic water bottles. Instead, they end up as material for fleece or carpeting.

The seemingly endless demand for oil is proving harmful to wildlife due to the pollution involved in the process. If you need evidence that oil drilling is bad for wildlife, just look at what happens to animals after an oil spill like the Deepwater Horizon spill in the Gulf of Mexico. Over 8,000 birds, marine mammals and sea turtles were tallied as either injured or dead within the first six months of the spill, and studies posit that dolphin populations are still being impacted by the spill.

Landfills are the primary receivers of the 35 billion plastic water bottles we throw out each year, with some escape artists making their way into terrestrial and aquatic ecosystems. Once a plastic bottle is tossed into the ocean or left on the street, it won’t fully degrade for 1,000 years! It will instead break into many tiny pieces first that have the capability to absorb harmful toxins like PCB’s and DDT. And once the plastic bottle has taken on its new form as a microplastic, it becomes readily available for consumption by animals like fish and plankton. Even then, it never disappears, but rather continues to circulate in a vicious cycle.

While our world’s oceans are faced with 8.8 million tons of new plastic material every single year, we must acknowledge that plastic water bottles share part of the blame for this problem. Is it rather crazy to think that a single serving of water from a bottling company could lead to wildlife facing hundreds of years of exposure to toxic chemicals and bits of plastic crowding them out of their habitat?

Now that you’re aware of how bottled water is pretty harmful to furry, feathered, and scaly friends alike, are you ready to step up for wildlife? There are a ton of ways you can help wild animals and insects, but one important way is to make sure you aren’t maintaining a bottled water habit that is harmful to other creatures. Here are a few tips to keep you hydrated without putting your “animal lover” status in jeopardy.

Settle for tap. Tap water is regulated by the EPA, which enforces harsher standards for water quality than the FDA does for bottled water. Barring any unusual circumstances, you should be perfectly safe and healthy relying on tap water to keep you hydrated.

Don’t hydrate with single-use plastic. Invest in a reusable water bottle, mug, cup, mason jar, or whatever else will hold a serving of H2O. Whatever your choice, it’s a better option than a plastic bottle.

Let your voice be heard. Removing support from the bottling industry is certainly a major way to let them know you don’t agree with their business practices. You can take your beliefs a step further, however, and get involved in public action against the bottled water industry. Food and Water Watch is currently leading a campaign against bottled water called “Take Back the Tap” to reduce bottled water’s hold on schools across America.

Taking on the bottled water industry in support of wildlife everywhere is not going to be an easy task, but it is certainly one you can start at home with each sip of water you drink.