Don’t Bite the Hand That Feeds! Why Humans Need Sharks 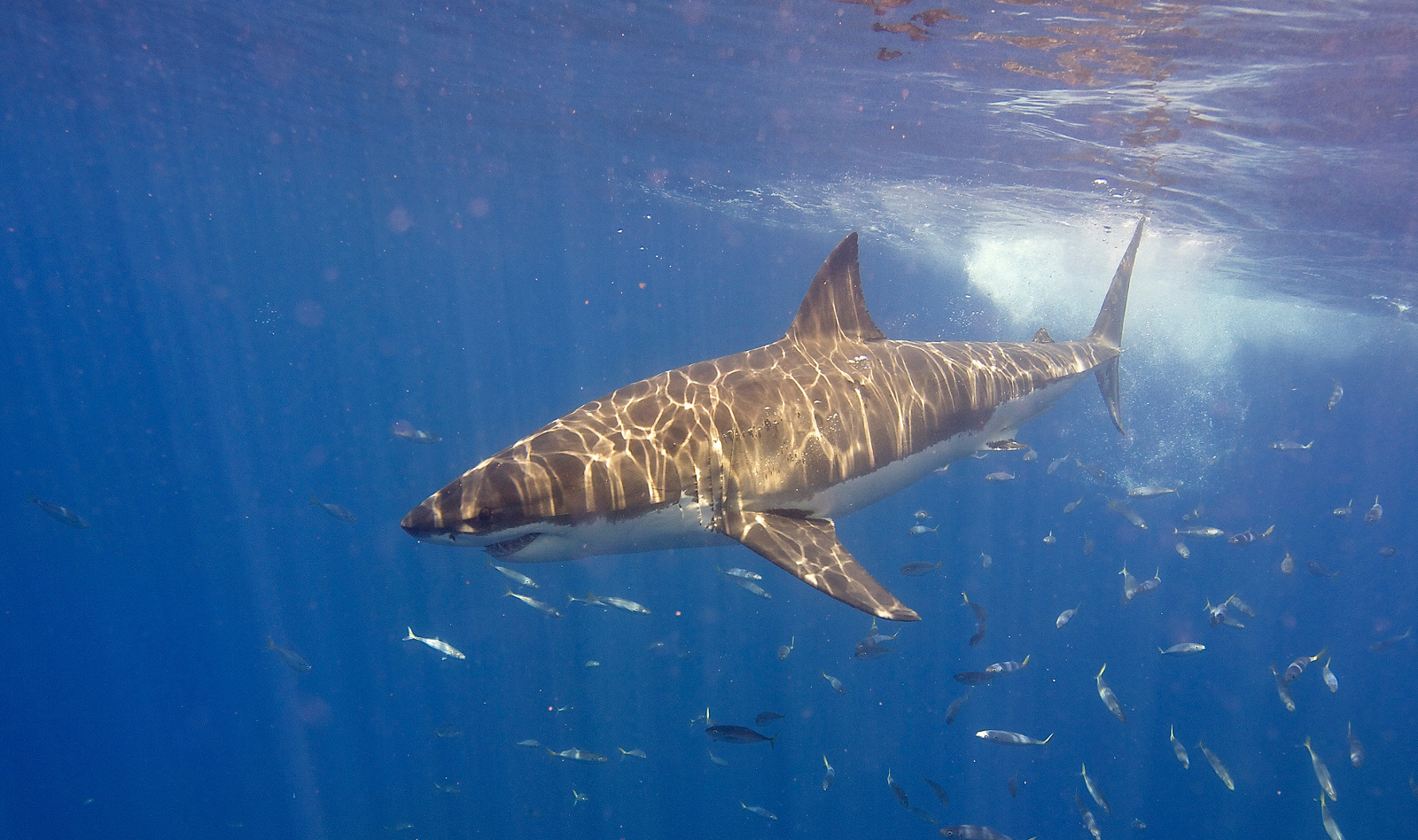 Sharks. They’re everyone’s favorite ocean enemy. Between the nail biting drama of Jaws and the never ending flicks about pre-historic mega-sharks and attack survivors, we have all but made the shark species a completely fictionalized being. And while sharks are in fact, very dangerous creatures depending on the circumstance, they are also vital to the health of our ocean ecosystem.

Our love for the fear of sharks has sadly led us to exploit these marine predators to an absurd degree. Every year, 100 million sharks are killed by humans – the majority of which are slaughtered for the shark fin trade, the others are either targeted in culls or become bycatch from the commercial fishing industry. Because we portray sharks as inherently bloodthirsty animals, most people assume that killing them is for out protection and benefit … but as we are finding, this is not the case.

Sharks are keystone predators who play an integral role in keeping other marine populations healthy and in check. While we might think that removing sharks from the oceans will keep our beaches safe, in reality, it is causing the degradation of the marine environment, which in turn negatively impacts us.

Most notably, when sharks disappear from an ecosystem, it causes a trophic cascade and leads to the disappearance of other key marine species. There are over one billion people worldwide who rely on seafood as their primary source of protein and we are finding that as sharks disappear, so do the fish that these people consume. While you might think that less sharks would mean more fish that are available for human consumption … this is not the case.

What Happens When We Take Sharks Out of the Equation

The impact of the disappearance of sharks would vary based on every individual ecosystem, but in every case, the results are equally devastating.

A study done of the coastal northwest Atlantic ecosystem found that over the past 35 years, the population of 11 great shark species have declined significantly. In the absence of the shark, the populations of 12 of the shark’s prey species increased. These species include the cownosed ray and skates. When these species began to play a dominant role in the ecosystem, it started to collapse. Skates and rays feed on small shellfish and the surplus of cownose rays, specifically, led to the collapse of a century-old bay scallop fishery.

Similar trajectories have been witnessed in the Black Sea, Baltic Sea and eastern Scotian Shelf. Unless major changes are made to restore the balance of the ocean ecosystem, the world’s fisheries are predicted to completely collapse by the year 2048. 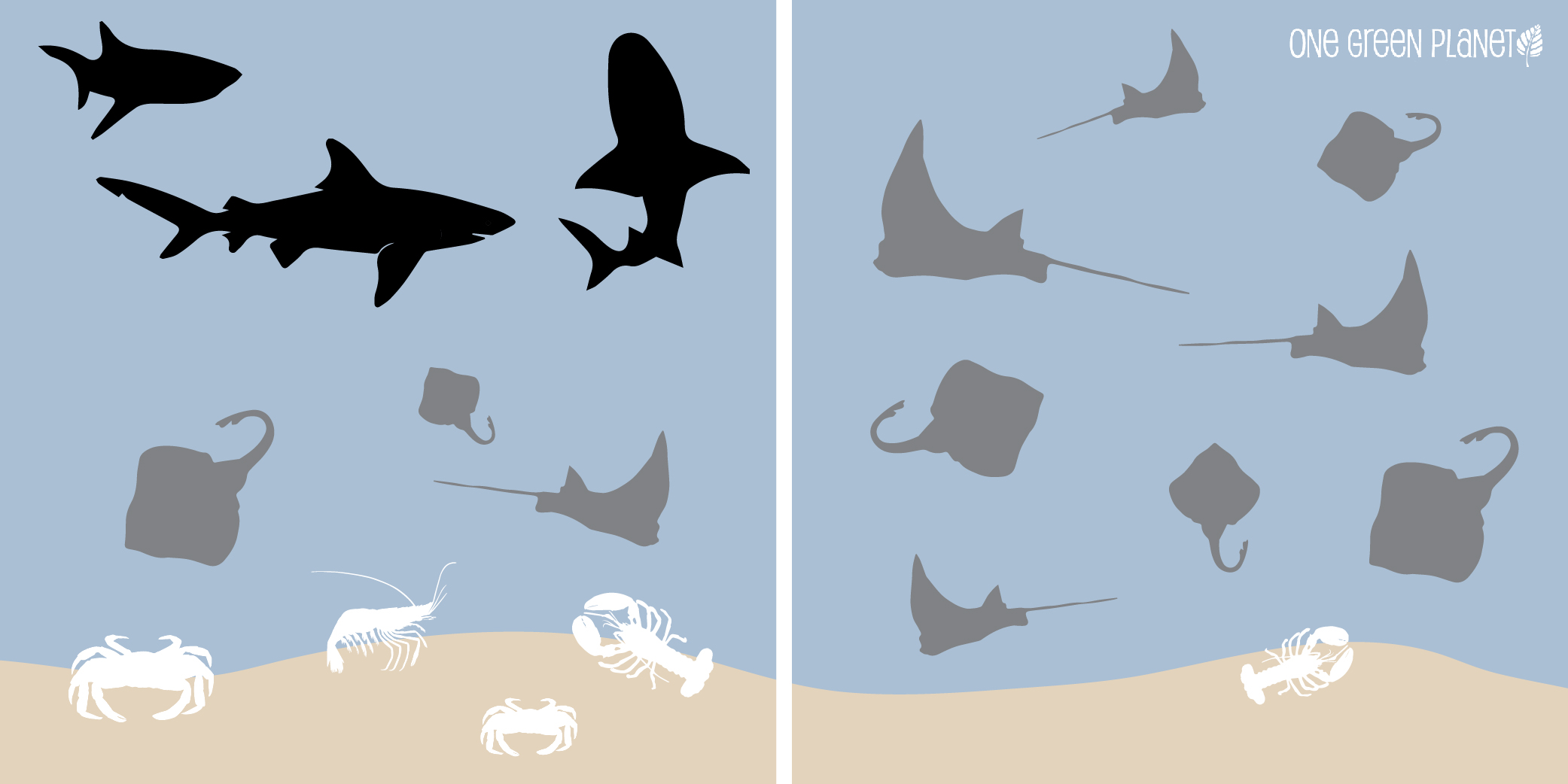 The Downfall of the Shark

The majority of the world does not rely on seafood as their only source of protein, but there are a number of nations who do. However, it is the most developed countries, like the U.S., whose aggressive and reckless fishing practices have contributed to the depletion of the shark populations and the world’s fish stocks. Commercial fisheries employ methods such as deep sea trawling and gill netting in an effort to catch as many fish as possible. But these methods also result in extremely high levels of bycatch (catching non-targeting species).

Since the 1950s, around 90 percent of the ocean’s top predators have been eliminated, largely impart to bycatch. To be exact, 400,000 sharks are killed by these means every year.

Simply said, we need sharks to ensure that fish stocks are healthy and thriving. Further, sharks play an integral role in conserving fish populations for the one billion people who rely on them for their primary food source.

Around 30 percent of shark species are in danger of extinction, largely due to human actions. Intense commercial fishing and the shark fin trade are virtually wiping the shark species out of existence. While we might think that the shark is a terrifying predator … what is more frightening is a future where there are no sharks and the entire marine ecosystem is allowed to collapse.

In the United States, we do not need to consume fish as a means of survival, but nevertheless we consume around 4.8 billion pounds every year. If one person were to remove fish and shellfish from their diet for one year, it could save 225 fish and 151 shellfish. But, the benefit of this extends all the way back to the sharks. If less people consume fish, the demand goes down and there could be less need for bottom trawling and gill netting, which in turn would mean less chance that a shark would be pulled in as bycatch.

The consumption of shark fin soup is also putting a significant strain on the shark population. By spreading the word about the importance of the shark to the health of our oceans (and us!), we can change the perception of this delicacy and help keep sharks in the oceans (this strategy is already beginning to work in Hong Kong and China).

So, start spreading the word that saving sharks saves us!