The question of how we’re going to feed a population of 9.7 billion people by 2050 is possibly the most burning one facing humanity. Our current food system, which is heavily focused on meat and dairy production, already occupies around half of the world’s arable land and uses a majority of freshwater resources – and still, around one billion people lack access to food. What’s more, the massive amounts of air and water pollution, coupled with the greenhouse gas emissions produced by animal agriculture are contributing to climate change and endangering our ability to grow more food for people in the future.

The bottom line is we’re doing a better job at feeding animals than we are at feeding people – and if we continue to do so, we will be absolutely incapable of feeding ourselves in the near future. Luckily, many individuals and companies are taking note of the failures of our food system and looking to new technology and innovation to solve this pressing issue. Being that we’re familiar with the statistics surrounding just how damaging our food system is to people, animals, and the environment, we are cautiously optimistic about the change that has been happening with a rise in plant-based protein companies and consumer trends that favor eating less meat and dairy – but we recently heard something that has given us tremendous amount of hope for the future of food and the planet.

In a recent interview with  Zacharias, co-founder of One Green Planet and host of the new podcast #EatForThePlanet with Nil Zacharias, Prince Khaled Bin Alwaleed, founder and CEO of KBW Ventures detailed how he plans to relegate factory farming to the dustbin of history – within the next 10 years – through strategic investments in cellular agriculture and plant-based proteins.

Khaled believes that there is a viable solution to factory farming in cellular agriculture and thanks to the tremendous leaps this new technology has made in the past five years alone, he is quite certain that companies will be able to scale it up and make “clean meat,” which is grown in a lab, using a small fraction of the current resources to produce meat without harming animals or the environment, competitive with current organic meat in a decade or less. 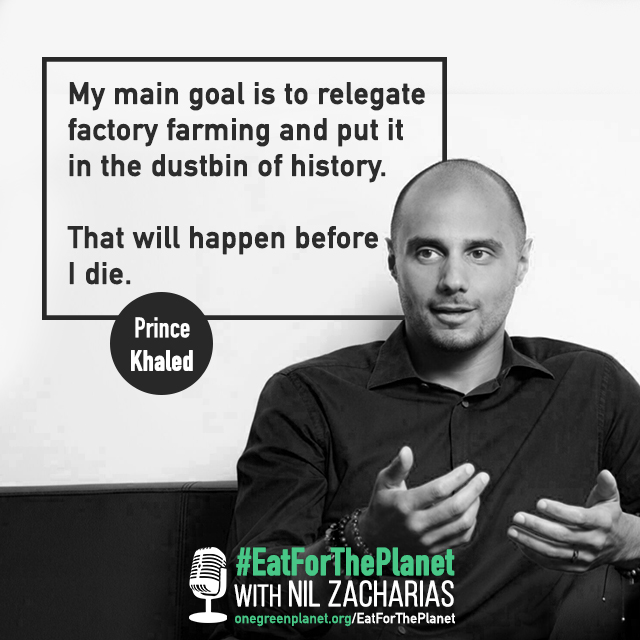 Hearing something like this certainly has us hopeful that change is on the way – and this is only one of the extremely encouraging things Khaled shared in this interview.