For many people, their faith and religious beliefs are very important aspects of their daily lives, steering them toward the decisions that they feel are right for themselves and their loved ones. It is clear, therefore, that whenever a prominent spiritual leader urges their followers to take action to save our planet’s vulnerable ecosystems or animals, their words can have a powerful impact. For example, when Pope Francis released a powerful encyclical urging Catholics around the world to help tackle climate change and protect animals, many environmental organizations were quick to praise his forward-thinking approach.

Thich Nhat Hanh, a renowned Buddhist leader, has long taught that compassion to animals is a vital part of a spiritual lifestyle. His words on the importance of preserving our planet and all of its species hold a vital lesson, not just to those of us who may be Buddhist, but to anyone who wants to live a more sustainable, kind life.

Lessons That Can Save the World

“When you realize the Earth is so much more than simply your environment, you’ll be moved to protect her in the same way as you would yourself,” he added. “This is the kind of awareness, the kind of awakening that we need, and the future of the planet depends on whether we’re able to cultivate this insight or not. The Earth and all species on Earth are in real danger.” His words point to a disturbing truth: that we are in the midst of creating the sixth mass extinction event on our planet.

An extinction event is defined as the loss of 75 percent of Earth’s animal species within a period of three to twenty-two centuries. A recent report by the World Wildlife Fund (WWF) and the Zoological Society of London revealed that 58 percent of our planet’s wildlife has vanished in the past four decades alone, so we are well on our way to meeting these criteria. The five previous extinction events were caused by natural disasters, but this one has been driven by human industrial activities. Extensive habitat loss caused by deforestation has been heavily associated with the animal agriculture and palm oil industries. In the Amazon rainforest, for example, an estimated 80 percent of the total deforestation that has occurred to date can be attributed to livestock production. In the rainforests of Indonesia, an estimated three hundred football fields’ worth of trees are destroyed every hour to make way for palm plantations: a process that kills and displaces countless wild animals. 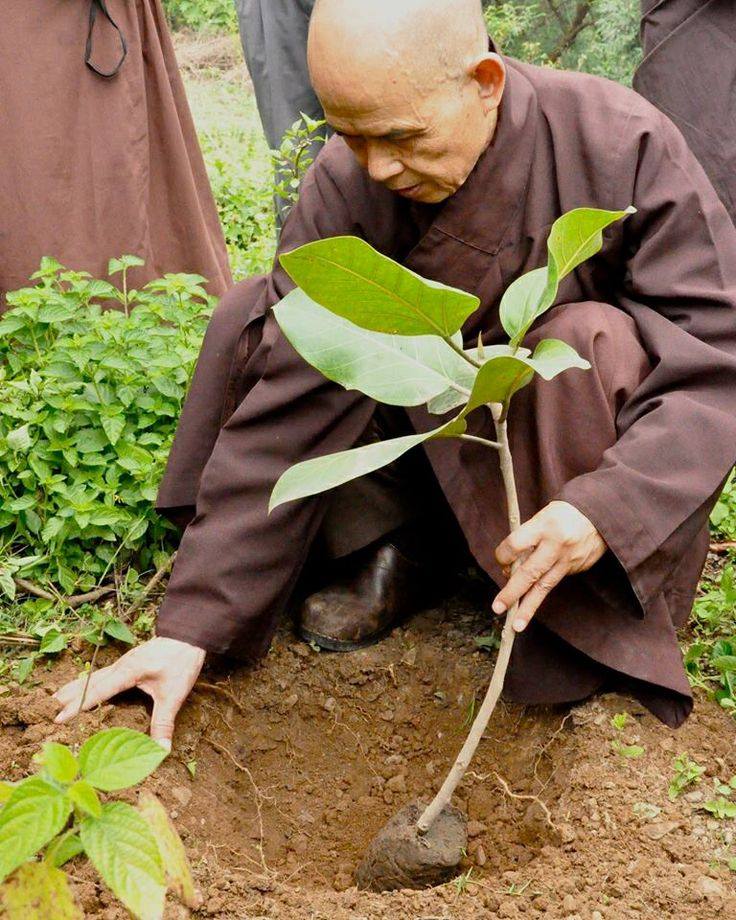 Thich Nhat Hanh believes that the solution to our environmental crisis can be found, if we all make the effort to embrace a simpler lifestyle. “We need to consume in such a way that truly sustains our peace and happiness,” he said in his statement to the UNFCCC. “Only when we’re sustainable as humans will our civilization become sustainable.” He believes that a reduced consumption of animal products is a vital component of this shift to a more sustainable lifestyle.

“We need to consume in such a way that keeps our compassion alive,” he stated. “And yet many of us consume in a way that is very violent. Forests are cut down to raise cattle for beef, or to grow grain for liquor, while millions in the world are dying of starvation. Reducing the amount of meat we eat and alcohol we consume by 50 percent is a true act of love for ourselves, for the Earth and for one another. Eating with compassion can already help transform the situation our planet is facing, and restore balance to ourselves and the Earth.”

As the leading organization at the forefront of the conscious consumerism movement, it is One Green Planet’s view that our food choices have the power to heal our broken food system and pave the way for a truly sustainable future. By choosing to eat more plant-based foods, you can help conserve precious land and freshwater supplies, thereby ensuring that our food system will be capable of supporting the world’s growing population in the future. As Thich Nhat Hanh put it in his closing statement to the UNFCCC: “Cherishing our precious Earth–falling in love with the Earth – is not an obligation. It is a matter of personal and collective happiness and survival.”

If you want to start changing the world for the better with your food choices, join One Green Planet’s #EatForThePlanet movement.