These Aren’t Clouds, They’re 300 Football Fields Worth of Flames – Caused by Our Snacks

Indonesia’s forests are home to 38,000 plant species and over 2,300 species of birds, mammals (including 35 species of primates), and amphibians, rivaling the Amazon in terms of biodiversity. Composed of 17,000 islands, Indonesia has the second highest level of biodiversity in the world.

The Leuser ecosystem, in particular, located on the island of Sumatra, has been dubbed “one of those almost mythic natural wonders that defies the imagination with its diversity and abundance of life” by Lindsey Allen, executive director of Rainforest Action Network. This area, believed to contain some of the most ancient forests in the world, is also one of the last to see orangutans, elephants, tigers, and rhinos cohabitating in one space.

Yet this diverse and significant “natural wonder” is being wiped out at an alarming rate for one cheap consumer product. Increasingly making headlines, the infamous palm oil is the major cause for Indonesia’s damaging deforestation. Despite being incredibly damaging to the environment, people and animals, palm oil is ubiquitous and currently found in 50 percent of our consumer products.

An estimated 300 football fields worth of rainforest are cleared every hour to make space for palm oil plantations. It’s tough to describe what devastation on such a vast scale looks like. Thankfully, a picture is worth a thousand words: 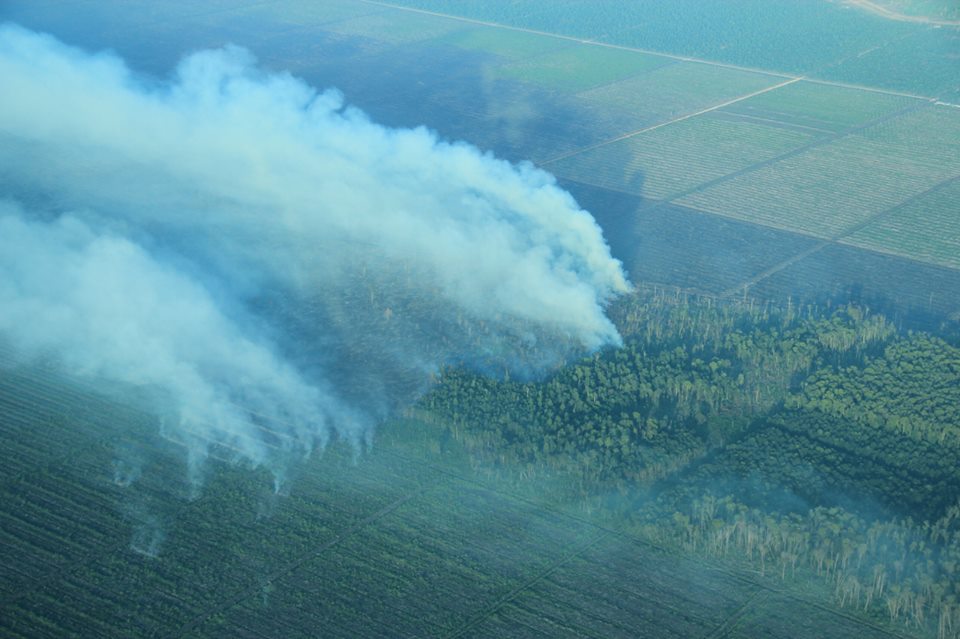 Indeed, while illegal logging is partly to blame, the unchecked expansion of palm oil plantations is chiefly contributing to the rampant destruction pictured above.

According to Sumatran Orangutan Conservation Programme, Indonesia’s forests harbor the highest densities of orangutans in the world, and these animals are now chiefly at risk due to the expansion of palm oil plantations. The World Wildlife Fund estimates that the orangutan population has dropped by three-quarters in a century, plummeting due to the unrestrained destruction and fragmentation of their habitat. This leads to insufficient food and territory, leaving animals vulnerable to wildlife poachers and traffickers. Unfortunately, the diversity of Indonesia’s forests mean that orangutans aren’t the only species threatened by commercial deforestation, with rhinos, tigers, elephants, and many more also facing extinction.

Moreover, Indonesia’s people and animals aren’t the only ones paying a high price for this cheap commodity product. The greenhouse gas emissions produced from deforestation, forest fires and the highly-polluting practice of burning peatland contributes to the already dangerous phenomenon of global warming and puts our planet at risk.

The World Resources Institute counts Indonesia as one of the top ten heaviest polluters in the world, noting that the practice of burning forests and peatland known as slash and burn, is responsible for 97 percent of the country’s greenhouse gas emissions. The devastating effects of slash and burn peaked last year, when rampant forest fires killed and endangered wild animals and local people, and caused average daily greenhouse gas emissions exceeding those recorded in the United States.

Unless demand for palm oil is curbed, forest fires will blaze on, jeopardizing local people, wildlife and our planet’s health.

The best way to single-handedly fight environmental damage, climate change, species extinction, wildlife trafficking, animal cruelty, community exploitation, and child labor is to become a conscious consumer and inspire people around you to do the same. Find out How to Wean Yourself Off Palm Oil and replace consumer products with these Planet-Friendly Alternatives.

Be sure to support companies that have stopped using palm oil and are working to end deforestation, and boycott those that continue to engage in environmentally destructive practices by buying the oil. You can also share this article to help raise awareness of the devastating impact of palm oil and the urgent need there is to protect Indonesia’s forests, and consider supporting organizations fighting to protect the world’s rainforests and its residents. These include Rainforest Action Network, Rainforest Rescue, The World Wildlife Fund, The Orangutan Conservancy, International Animal Rescue and more locally, the Sumatran Orangutan Conservation Programme.