Study Confirms Fracking is Polluting Water in Pennsylvania, So Why the Frack is it Still Happening? 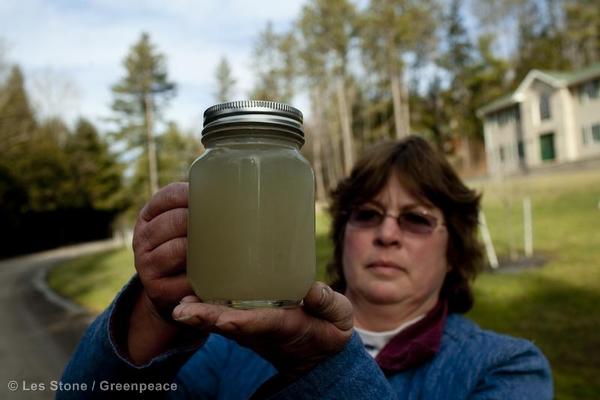 The study discovered that the whitish foam seeping from the faucets and hoses in Bradford county homes was the drilling chemical 2-BE a “foaming agent” known to cause tumors in rodents. The fracking industry contaminant was present in drinking water wells closest to Chesapeake Energy shale operations.

Residents of Bradford have been complaining about contaminated water since Chesapeake Energy began drilling in 2009. Bradford is now the “most fracked” county in Pennsylvania, and Chesapeake is the largest lease holder. While Chesapeake has never admitted responsibility for water contamination, the company has paid millions in settlements to Bradford residents since 2011.

But Didn’t We Already Know That Fracking can Contaminate Groundwater Supplies?

But that has not stopped an industry-funded campaign of denial on the issue. The fracking industry has spent big to keep people in the dark on the real impacts from fracking, funding front groups like Energy In Depth to obscure the science on fracking and drilling.

Where is the EPA’s Study on Fracking’s Impact on Drinking Water?

Even the Environmental Protection Agency (EPA) has been manipulated by the fracking industry’s campaign to hide this dangerous truth. The EPA, at the behest of Congress, was tasked with studying the impacts to water supplies from fracking in 2010. This study was supposed to tell the American people what can happen to water supplies when the shale industry sets up shop. Five years and hundreds of thousands of fracked wells later, the EPA has still not given us an answer.

The EPA’s study was originally due to be released in 2012, but has been repeatedly delayed. As Inside Climate News reported, the delay may have been caused by interference from oil and gas corporations. Shale drilling and fracking companies, including Chesapeake Energy, refused to cooperate with EPA, effectively torpedoing key elements of the study. This delay has kept the American populace in the dark on the real impacts of fracking.

The confusion about who is to blame for contaminated water in Bradford County is an example of the havoc wrought by the fracking industry’s campaign of delay against the EPA’s water study. In fact, Bradford is one of the places being studied by the EPA in order to ascertain how fracking impacts groundwater. The EPA took 37 samples in Bradford in 2012, yet has not released any findings.

Documents obtained by Greenpeace show that Chesapeake Energy fought the EPA’s research in Bradford. After Chesapeake found out the EPA intended to research water contamination issues in Bradford, Chesapeake commissioned their own study intended to directly address the EPA study and rebut any potential finding of contamination. The Chesapeake study, which they claimed was “independent,” found that there had been no groundwater contamination in the area. Chesapeake stuck with their claim that Bradford water was safe to drink, in spite of reports of sick livestock and illness in children exposed to Bradford groundwater.

Chesapeake demanded that the EPA include their industry-funded research in Bradford in the overall water study, even though the Chesapeake study collected less than half of the samples collected by the EPA. As Inside Climate News reported, Chesapeake also reneged on their promises to provide access to well sites for sampling by the EPA.

This new study is further proof that fracking has real impacts to the environment and public health, impacts that the industry has successfully denied for years.

This article originally appeared on the Greenpeace blog, here.