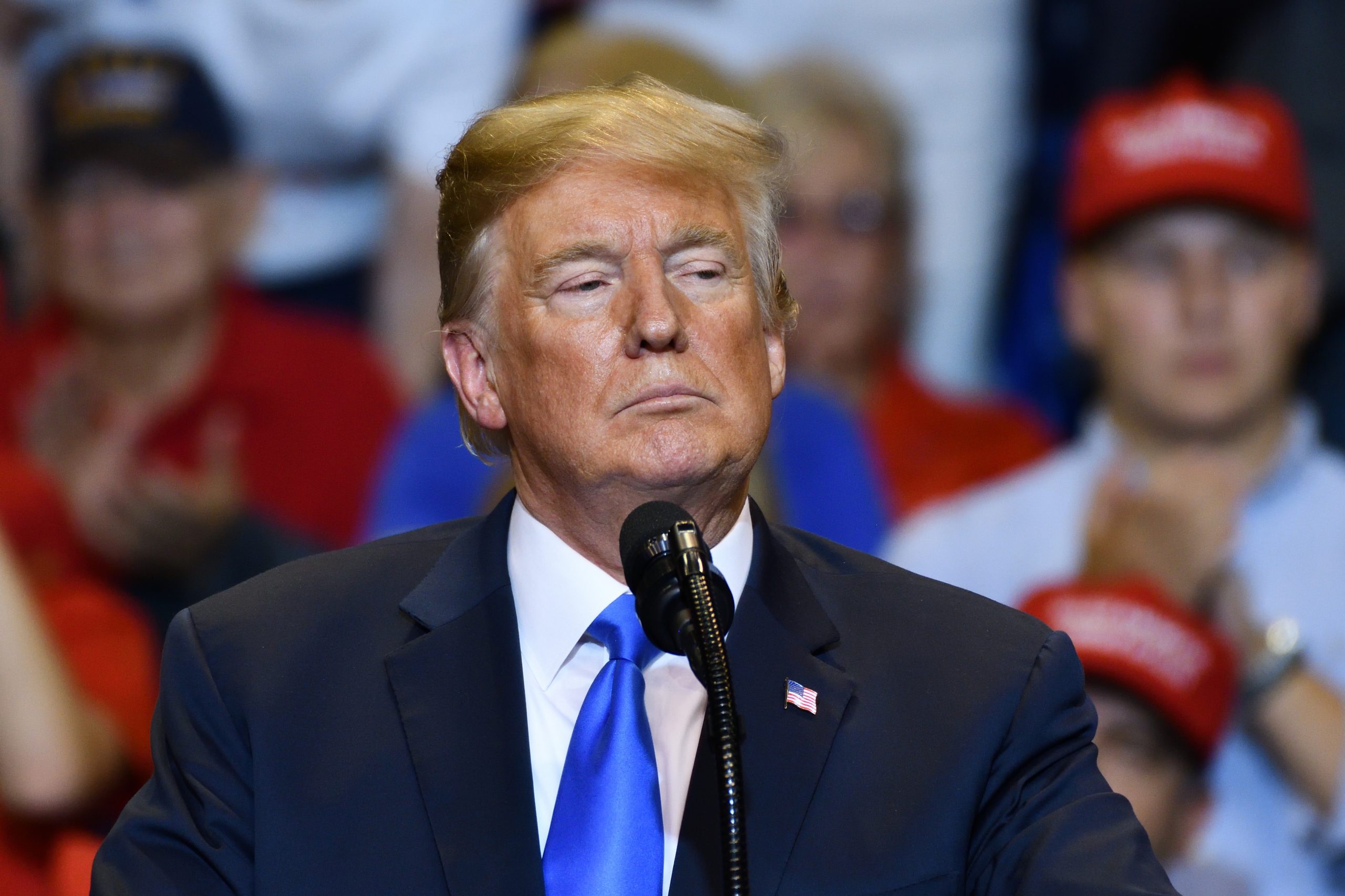 A manatee was recently discovered in Florida with the word “Trump” apparently etched into its back. The grotesque assault on the wild aquatic being by persons as yet unknown drew repulsion and outrage from the public and officials.

Coming in the final days of his presidency, the obscene act provided an apt illustration of Donald Trump’s impact on the natural world while in office. Indeed, the Trump administration wasted no time in its finals days making sure that toxic legacy is etched in stone.

Boat charter operator Hailey Warrington spotted the branded manatee, a threatened species, in the Homosassa River on 10 January. She told the Sarasota Herald-Tribune “This is just disturbing. One hundred percent disturbing”.

As well as being disturbing, the act was also illegal. As Ecowatch reported, Manatees are protected by the Endangered Species Act and the Marine Mammal Protection Act on a federal level. At state level, the Florida Manatee Sanctuary Act of 1978 provides for their protection.

Harassment of a manatee is a federal criminal offense punishable by a $50,000 fine and up to one year in prison.

Call the Florida Fish and Wildlife Conservation hotline at (888) 404-3922 with any info. https://t.co/oGqhBOywHA

There’s one apparent small mercy in the whole shocking incident. The U.S. Fish and Wildlife Service (USFWS) says it believes that the perpetrator etched the words in algae on the manatee’s back, rather than in their skin. Warrington said that the etching did reach the manatee’s skin but there were no apparent wounds. The USFWS has begun an investigation into the crime.

In keeping with Trump’s environmental record throughout his time in office, his administration assaulted wildlife and the natural world right up until the bitter end. Its attacks have been effectively legal. Indeed, the administration has even waived a bunch of laws in order to carry one of them out. Here’s just a small taste of the environmental havoc it’s been wreaking.

Wolves are a keystone species. That means they play an essential function in the ecosystems in which they exist. Without them, those ecosystems can collapse because other species are dependent on their presence. The transformative impact wolves had on Yellowstone Park after their reintroduction in 1995 illustrates this well.

Nonetheless, the Trump administration removed gray wolves from the Endangered Species List. The USFWS announced the delisting in November 2020. It came into effect on 4 January:

BREAKING: The Trump administration’s decision to strip all gray #wolves across the entire lower 48 states of federal Endangered Species Act protection took effect today. @wildearthguard be challenging this decision in court with our allies. #StopExtinction https://t.co/4yDcdsExUP

As Common Dreams reported, the removal of protections will allow all states to treat the wolves “as predators and kill or protect them according to their respective laws”. Prior to the nationwide delisting, wolves had already been stripped of Endangered Species Act protections in a number of states. That was, for example, the case in Idaho where 570 wolves – including pups – were killed in a single 12-month period. The government is facing legal action over the move.

As the Center for Biological Diversity’s (CBD) Collette Adkins has argued, the new president Joe Biden could “take decisive action and direct federal wildlife agencies to embrace a science-backed, full recovery of the wolf in the lower 48 states” by restoring federal protections for all gray wolves under the Endangered Species Act. He has the power to make that happen.

2. Partnering with the NRA

The National Rifle Association’s (NRA) Hunters’ Leadership Forum (HLF) proudly announced that it had signed a memorandum of understanding (MOU) with the USFWS on 13 January. In a petition against the move, the CBD explained that the MOU is an agreement between the USFWS and the NRA to work together “to recruit and train more Americans to shoot wild animals.” The CBD is calling for the USFWS to cancel the agreement immediately because it “runs directly counter to the purpose of the Service.” It argues that the USFWS should in “no way should it use its position as wildlife’s protector to enlist more Americans to hunt and kill wildlife.”

The outgoing USFWS director Aurelia Skipwith applauded the agreement. The NRA describes her as a “lifelong hunter, angler and recreational shooter”.

Trump’s behavior in relation to trophy hunting during his tenure was typically inconsistent. Although he publicly condemned the practice at times, policy decisions made by his administration often fell in hunters’ favor. In August 2020, for example, his administration expanded hunting and fishing on numerous wildlife refuges in the country.

In one of his first acts in office, Biden launched a review of Trump’s anti-environment policies. Arguably, this agreement between the NRA and the USFWS is exactly the sort of Trump-led decision that needs to be reviewed and axed.

Anyone who agrees that’s the case should call on the USFWS to do so.

In addition to putting a target firmly on the backs of wild beings in the US, the Trump administration also spent its remaining time in office ensuring they can’t make a run for it either. It stepped up efforts to get as much of the border wall constructed as possible. Indeed, the CBD’s borderlands campaigner Laiken Jordahl highlighted on 4 January that the Department of Homeland Security (DHS) waived a whole host of statutes and regulations related to construction to speed up the erection of the border wall in California:

BREAKING: Trump's @DHSgov just cast aside a slew of contracting transparency laws to rush ~80 miles of #BorderWall construction in CA.

This makes it easier for Trump's corrupt industry cronies to rake in billions while destroying the borderlands. Fed Reg: https://t.co/p5mXqLa5Y1

The border wall is blocking wildlife migrations and crossings between the US and Mexico. Jordahl has described its construction as a “death blow” to wildlife species that are already under pressure.

In an executive order on his first day in office, the Biden administration ordered a pause in border wall construction “as soon as possible but in no case later than seven days from the date of this proclamation.” Jordahl welcoming the reprieve but called for Biden to make the pause permanent to save species, such as jaguars:

#BorderWall construction is cutting off every cross-border migration corridor for jaguars between Arizona & Sonora. Construction has been “paused” but if @POTUS fails to cancel these contracts for good, it’ll be a death sentence for Jaguars in the US.pic.twitter.com/V2FcMgcHZC

Meanwhile, the Trump administration attempted to auction off fossil fuel leases in the Arctic National Wildlife Refuge at $25 an acre on 6 January. The effort failed to attract bids from ‘big oil’, with just two little known companies throwing their hats into the ring. An Alaskan state-owned development corporation did cough up $12m itself to secure drilling rights, however. The National Audubon Society pointed out that the state’s move to do so means it “could eventually partner with oil companies to develop its leased parcels”. The refuge provides a home for polar bears, caribou, migrating birds, and more.

The Biden administration has put a temporary moratorium on oil leasing activities in the refuge. In response to the new administration’s initial actions concerning environmental and wildlife issues, the CBD’s executive director Kierán Suckling said: “These strong steps must be the start of a furious race to avert catastrophe. Reversing Trump’s harmful actions is just the beginning, and we’re increasingly hopeful that our new president is on course to save America’s wildlife, stop approving new fossil fuel projects, and deliver the rapid transition to clean, distributed energy that science and justice demand”.

A presidential record that was 100% disturbing

In short, the Trump administration assaulted the natural world repeatedly over the last four years in ways that are 100% disturbing. It kept doing so right up until it vacated office. For manatees, wolves, polar bears, caribou, birds and countless other species, Trump’s exit day couldn’t come soon enough.

Sign these petitions to encourage the Biden administration to help animals and the environment: