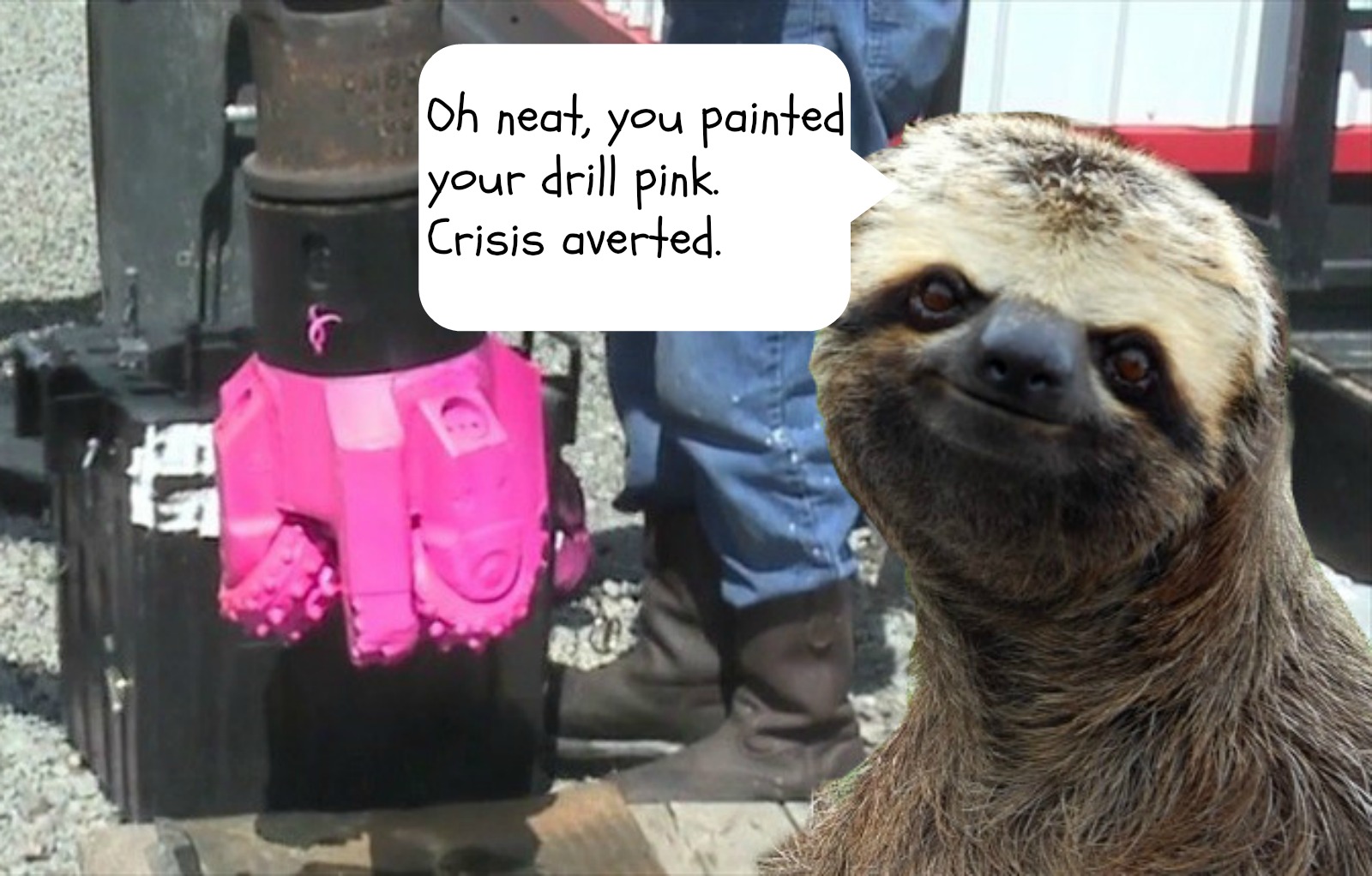 Hydraulic fracturing, known far and wide now as “fracking,” is the process of drilling down into earth’s shale rock layer with a cocktail of water and chemicals in an effort to extract natural gas for fuel. Shale is a layer of bedrock that consists of highly porous layers of compressed dirt and natural materials. Natural gas rises up and pools in those pores, making them a mix of sediment and vapor pockets. If that sounds unstable, that’s because it is…and we’re drilling into it.

From the pollution to water and air to major impacts on human and animal health, the damage to our earth and to ourselves has the potential to be devastating. Drilling companies continue to try and paint the picture that this cleaner-than-coal process is safe for us and the earth, but evidence continues to mount pointing to the contrary. This makes their continued assertions sound more and more ridiculous every day. Just look at this sloth. Like us, after hearing all of the evidence, he just can’t even.

Companies are pumping “trade secrets” into the ground.

Though people living near fracking sites are reporting symptoms such as nausea, headaches, asthma and increased rates of cancer, drilling companies are not required to divulge all of the specific chemicals that are used during the process.  Not only does that make treatment tricky, as trying to deal with an unknown substance is nothing short of a medical crap shoot, this also leaves these people with little legal recourse. Because the compounds are not disclosed, it’s next to impossible to tie an illness due to a compound to the fracking company. 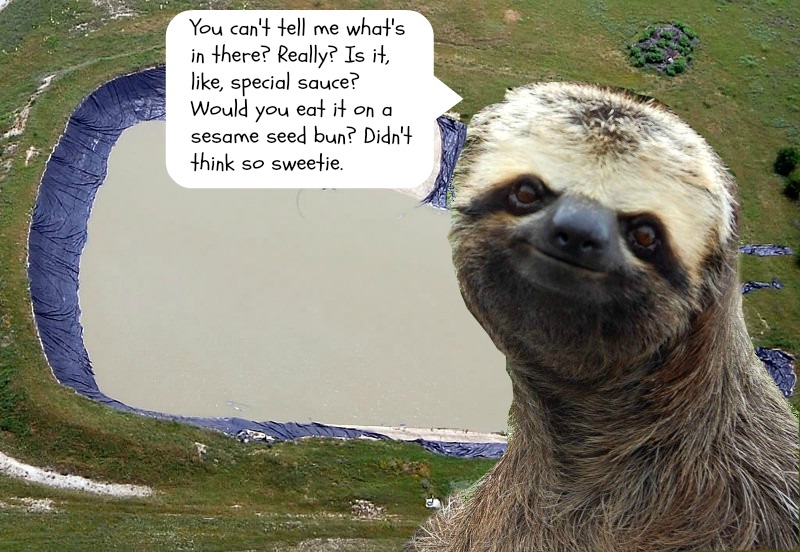 Runoff from fracking sites is exempt from penalties if it pollutes ground water. 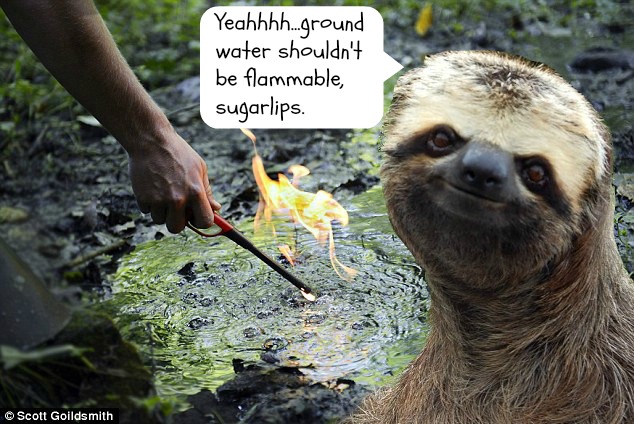 Public lands set aside for conservation, along with their animal inhabitants, are fair game for fracking.

Energy companies have already secured leases on 36 million acres of public lands to get their frack on and have their sights on 12 million more. Lands set aside for conservation. 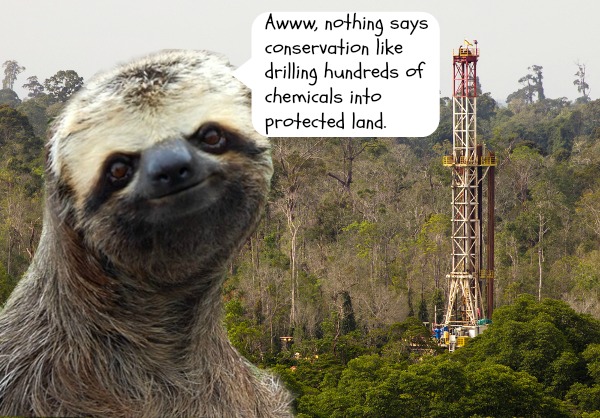 Multiple steps in the process have been linked to man-made earthquakes … as if the naturally occurring ones weren’t enough.

Due to the process of disposing wastewater in deeply drilled wells, earthquakes are now occurring in states that either didn’t previously experience seismic activity or experienced it to a far lesser degree (such as Pennsylvania, Ohio and Texas.) The process of fracking itself can also be linked to earthquakes, but they aren’t as prevalent as those produced from the wastewater wells. 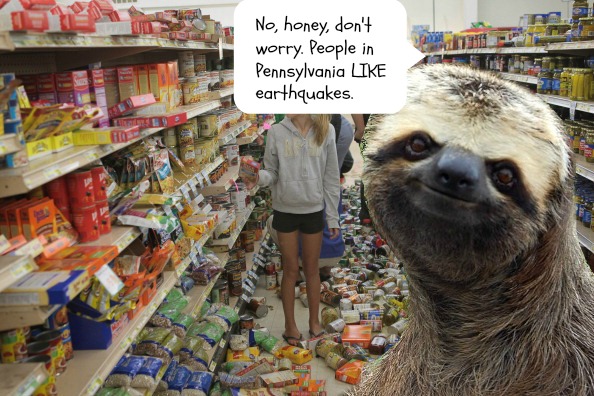 Of the 750 chemicals potentially used in fracking, 29 are known carcinogens.

This is potentially linked to noteworthy increases (20 percent near the Barnett Shale in Texas alone) in breast cancer between 2005 and 2008. Compounds such as benzene have been found at as much as five times above safe limits. “I was amazed,” said Dr. David Carpenter, director of the Institute for Health and the Environment at the University at Albany-State University of New York. “Five orders of magnitude over federal limits for benzene at one site – that’s just incredible. You could practically just light a match and have an explosion with that concentration.”

With cancer’s long latency, it could be 10-15 years before the magnitude of the public health impacts are felt. By then, it will be too late. 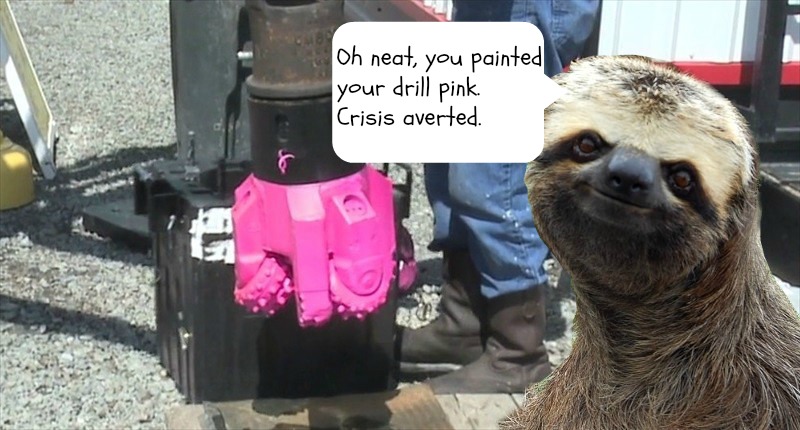 Carcinogens aren’t the only concern. At least 130 chemicals of the known substances (again, not all of the chemicals used are public knowledge) are endocrine disruptors. These cause disruptions in animal (which includes us humans) hormone levels,  potential threats of which include: low birth weight, miscarriage, infertility, low semen quality and impaired fetal growth. 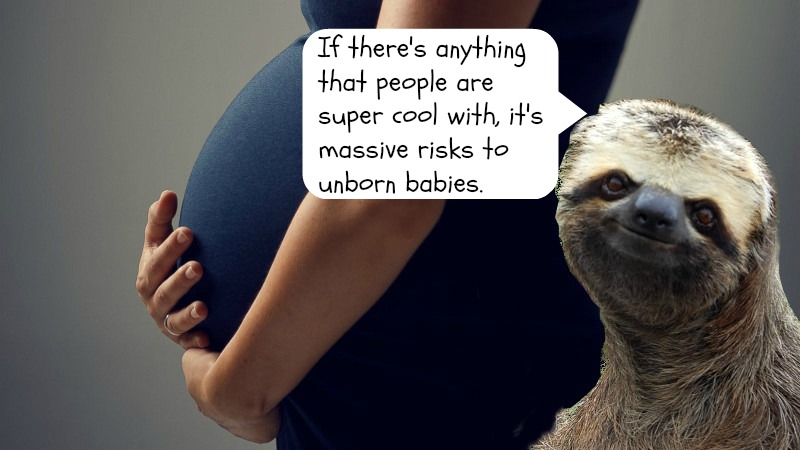 Despite huge public outcry, fracking companies are permitted to drill on privately owned land. This includes beneath homes and farm land.

Though over 40 thousand people voiced opposition, the UK stripped the right’s of homeowners to refuse fracking operations directly under their homes. Their fears are justified, considering that the only fracked site in the UK to date has triggered two earthquakes, suffered a “structural integrity failure,” and risked poisoning water supplies.

Similarly, while farmers in the US own the rights to their land, the rights for the minerals beneath it are up for grabs. Forced to lease portions of their farms to drilling companies and, many times, unable to afford attorneys to fight them, farmers are forced to either abandon their land entirely or stay and suffer the ramifications of the operation to their animals and crops. 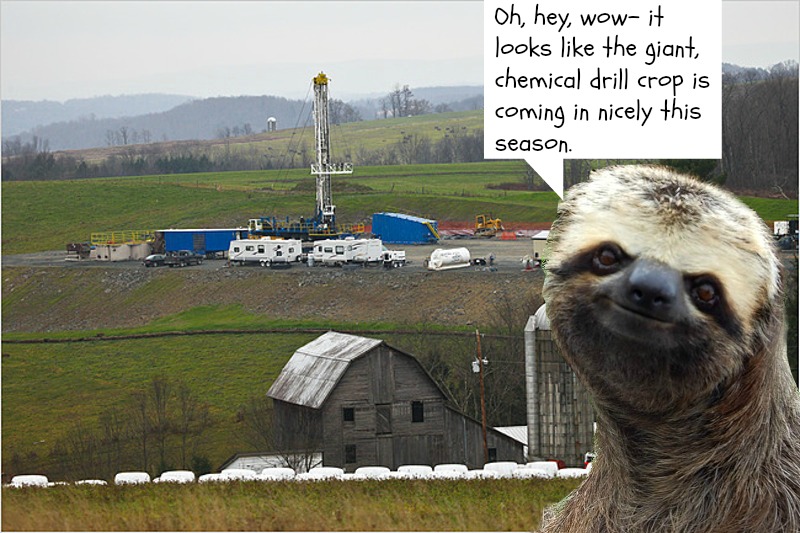 The water required for fracking operations is huge.

Just as the name indicated, hydraulic fracturing relies on water to get the job done. In fact, 90 percent of the mix being drilled in order to release natural gas is water. The water is typically sourced at the expense of local streams to the tune of an average 2-8 million gallons per well. Along with the obvious ramifications of using a necessary resource in unsustainable amounts, fish are also dying at an alarming rate.

This is thought to be due to, first, the enormous water withdrawals (quite literally draining streams) that can’t be restored due to the high toxicity of it once it’s been used for drilling. “Trade secrets” mixed with natural contaminants such as arsenic and cadmium don’t make for pleasant swimming water. Secondly, runoff and spills are polluting the water as well, so what isn’t removed is poisoned. 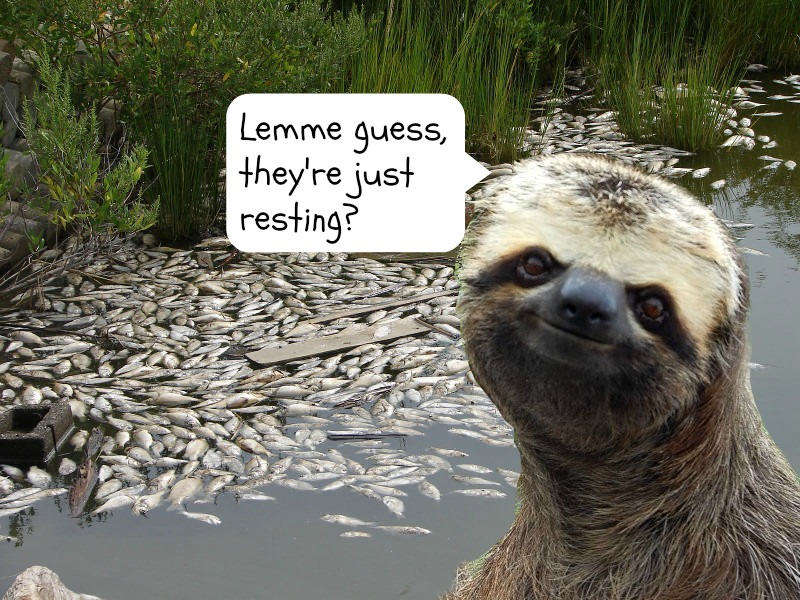 Air pollution is increased, leading to health and environmental concerns.

Multiple studies show that areas where fracking is prevalent boast increased ozone (smog), which contributes to childhood asthma and upper respiratory issues as well as global warming. In Texas fracking areas, this asthma increase was from seven percent to 25 percent in recent years. But, wouldn’t this be covered under the Clean Air Act? You guessed it, just like with the Clean Water Act, oil and gas companies (and thusly fracking operations) are exempt from that one too. 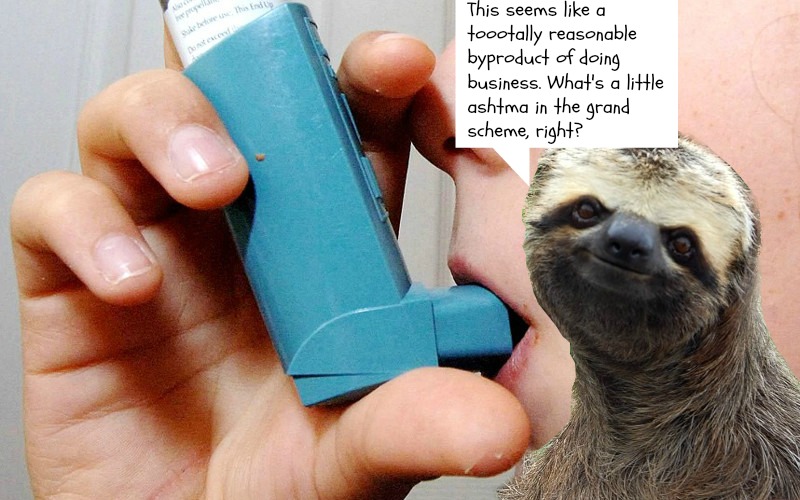 Air and water aren’t the only types of pollution it causes.

Noise pollution has become a notable issue for people living near drilling sites as well as the local wildlife. The booming noise of the drills along with the clamoring trucks frighten wildlife, which impacts their migratory and reproductive habits. One study found that a single drill site can affect up to 30 acres of forest. 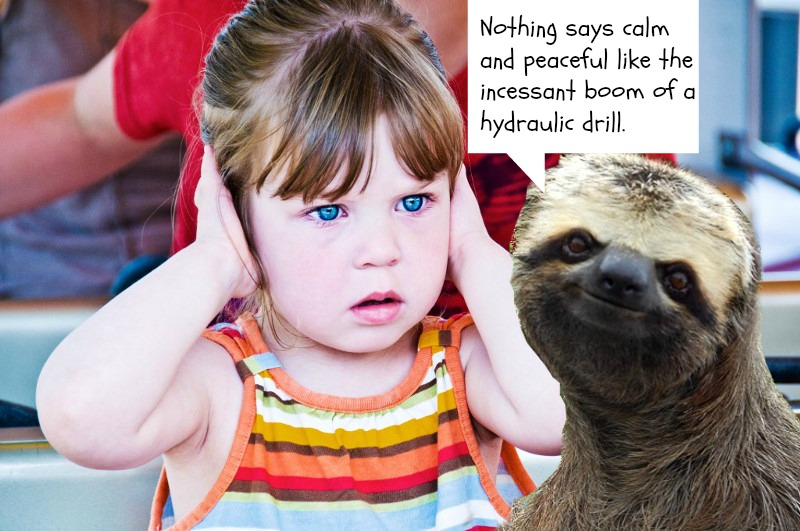 While the point of fracking is to reduce our coal consumption and make us energy independent, it is focusing attention and support away from truly renewable sources of energy. This is at the cost of the environment, as a Cornell University study found fracking leaks double the methane into the environment than traditional gas production does. Why is this bad? Methane (CH4) is a green house gas, and a potent one at that. It’s much more efficient at trapping heat than carbon dioxide (CO2), to the tune of 72 times more in a 20 year period. Considering that 20 years is the marker after which the effects of climate change will be irreversible, controlling a potent contributor like CH4 now is of the upmost importance. 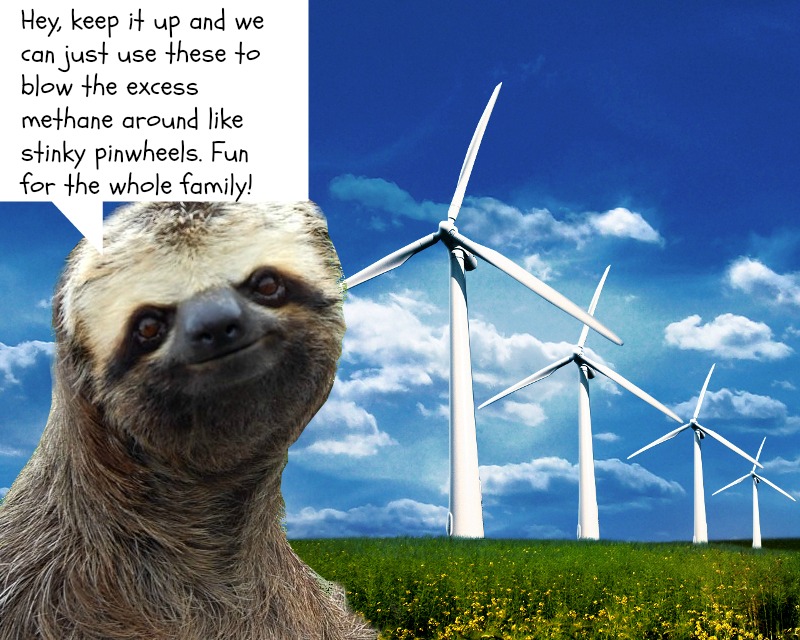