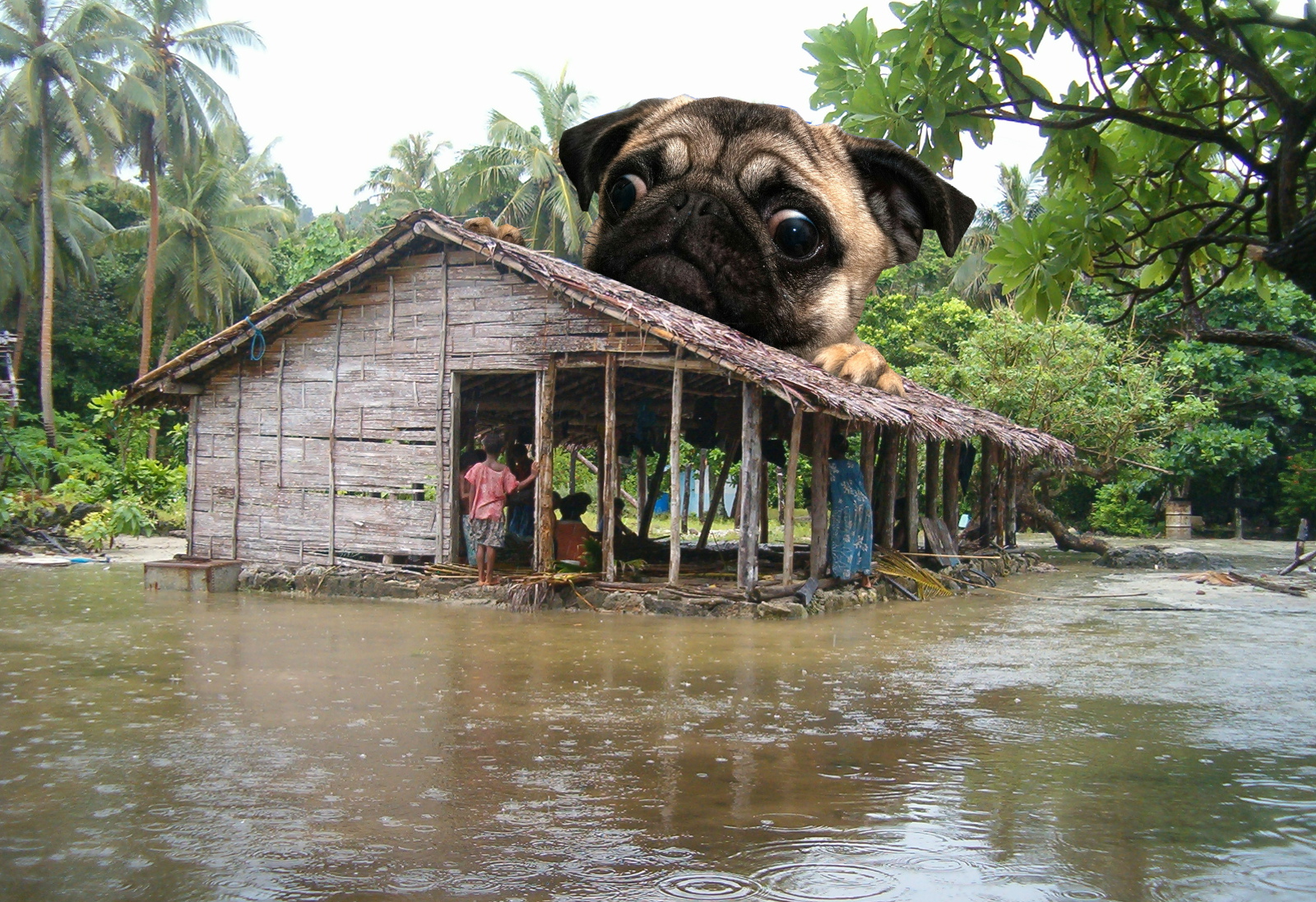 Ever been the the Maldives? Gorgeous, isn’t it? Did you know that due to the effects of climate change, the Maldives are at risk of disappearing forever? It sounds like a sci-fi movie, we know, but it’s a scary reality that we must face if we intend to do anything to stop it before it’s too late.

Over the course of time, deforestation, unsustainable food production (particularly the production of beef and other animal products) as well as industrial pollution have put excess emissions into the atmosphere. Known as greenhouse gases, these emissions consist largely of carbon, methane, nitrous oxide and ozone and work to trap heat into the atmosphere. This excess heat has been linked to rising sea levels due to melting ice caps as well as causing changes in weather that increase freak storm activity.

The result? We’re losing land. With the global population expected to reach 9 billion people by 2050, land resources are tapped enough without the knowledge that we’re actively losing square footage. Some of the residents from these 11 pacific island nations have already been displaced by salt water not only flooding their villages but due also poisoning their crops and drinking water. That’s why Activist Pug decided to check in on these locations to see how bad the situation really is. His opinion? They need our help.

Being dubbed the “world’s next Atlantis,” this Pacific island nation has already seen the loss of Tebunginako, the island’s former main harbor. The danger is due to rising seas and king tides, a normal occurrence several times per year that are now able to reach higher and further inland than ever before. With Tebunginako resting below several meters of water, it stands as a harbinger of what could befall the rest of the 33-island South Pacific nation. 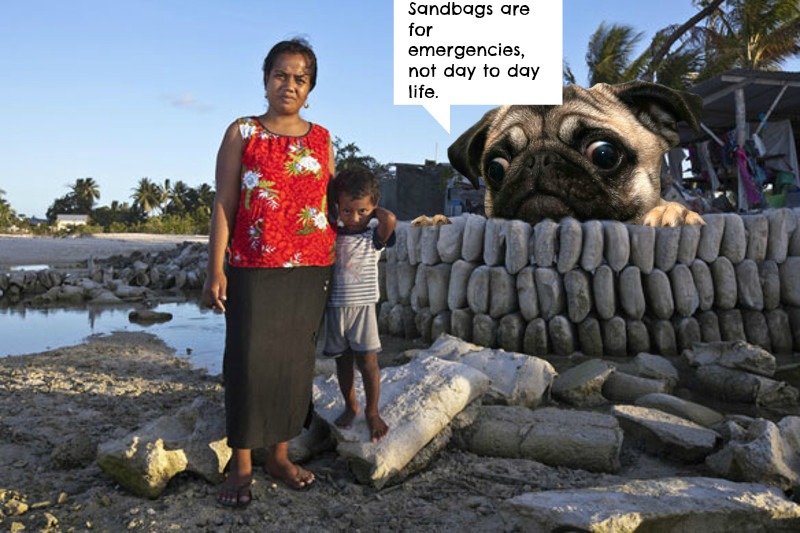 At 1000-kilometers long, the Maldives is the lowest lying country in the world. It’s also not built on sand, but on corral reefs, which proves a double whammy in terms of it’s long term survival in the face of climate change. Rising sea levels coupled with ocean acidification are simultaneously eroding the island and killing off the fragile foundations on which it rests. To date, 14 of the 100 inhabited islands are already lost. 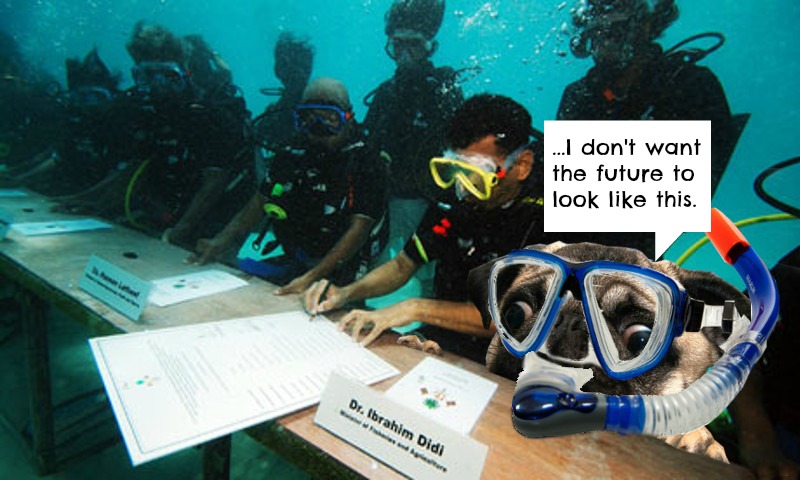 A popular tourist destination, Seychelles is an archipelago that boasts immense corral reefs and marine biodiversity. But, the effects of climate changing are hitting the islands in several ways, most notably due to the effects it has on the corral reefs themselves. Ocean acidification is killing the reefs, which not only effects the fish in the area but also removes the first line of defense the islands have against waves and high tides. The result is coastal erosion, meaning that the islands are literally being washed away into the sea. If things remain as they are, what isn’t washed away could be completely submerged in 50-100 years. 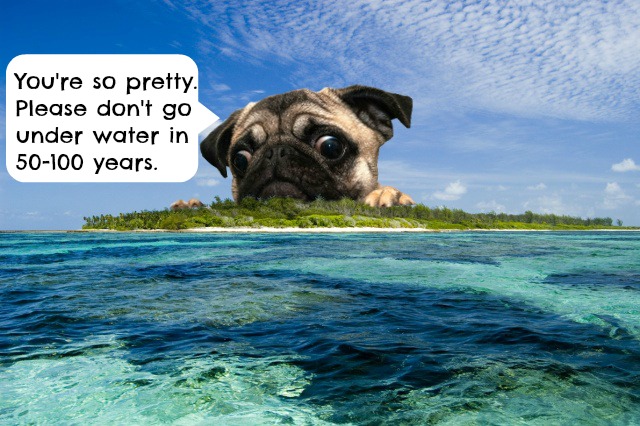 Near Australia, the Torres Strait consists of 100 islands, 17 of which are permanently inhabited. Coastal erosion and inundation are taxing the residents of this island chain so much that they’re warning Australia that they may become climate change refugees if nothing is done. Like many of the pacific island chains, Torres Strait risks loss of coral reefs, soil erosion and inundation. 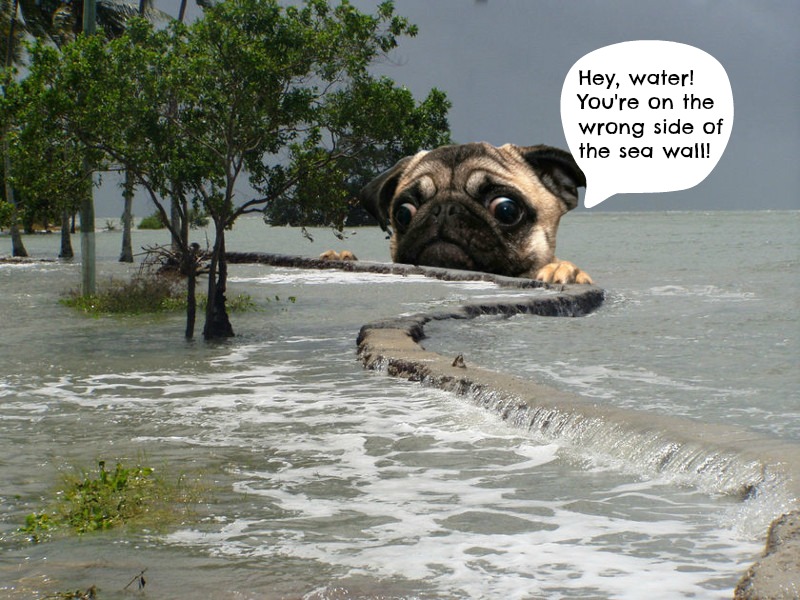 Only four miles long and ten miles wide, this tiny island is one of five atolls in the Torres Group. With coastal residents already abandoning their homes to move 300 meters inland, residents are trying to outrun the flooding that began in the 1980s and hasn’t let up since. As flooding due to high tides also results in erosion of coastline, it’s only a matter of time until those resident will have no more high ground left. 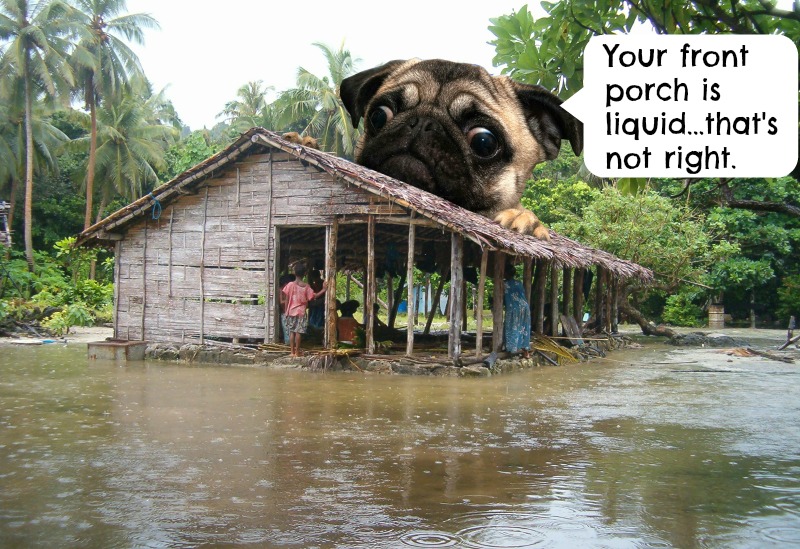 Part of the Pacific Rim of Fire, an area of the Pacific particularly prone to cyclones and extreme weather events, the Solomon Islands are bearing the brunt of climate change’s effect on weather patterns. Global temperature increases have been linked to an increase in extreme weather activity, causing increases in flooding due to high tides as well as landslides due to seismic activity and increases in the rainy season on the Solomon Islands, which makes growing crops nearly impossible for months on end. This, coupled with rising sea levels, will cause the Solomon Islands to be uninhabitable sooner rather than later. 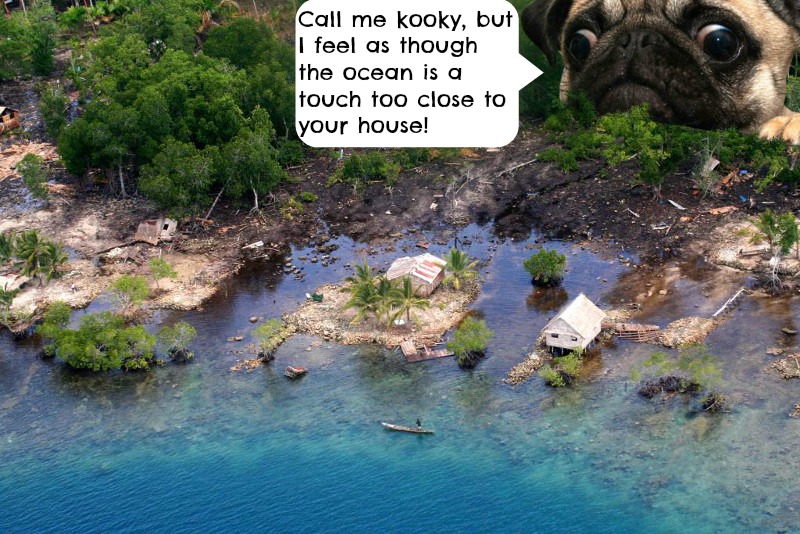 This 207 square mile nation boasts a population of over 100,000 people who are threatened with not only the loss of their homes, but also with the loss of their very culture if sea levels rise much more. Masao Nakayama, permanent representative of the Federated States of Micronesia to the United Nations, contends that an increase of just 1 meter would be devastating for the nation. 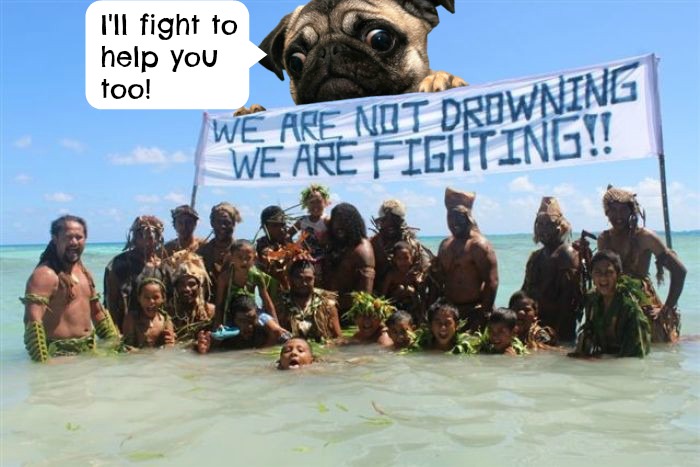 Near the Philippines, Palau is home to 20,000 people and some of the world’s most stunning marine life due to its reefs. However, climate change is causing coastal erosion, destruction of farmland due to salty seawater and risk to the very reefs that so many ocean species call home. President Johnson Toribiong likens the damage to watching “a slow-moving tsunami.” 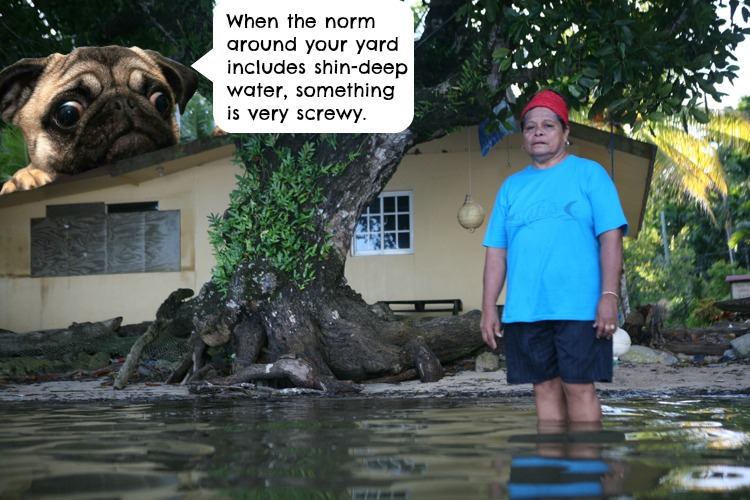 This locale holds the dubious distinction of having the world’s first climate change refugees. Located in Papua New Guinea, the island will be entirely submerged by 2015, though the residents have been forced to leave prior to that due to seawater poisoning the crops that weren’t washed away by king tides first. Some 2000 people were forced to move to a larger, higher island. However, with an increase of 8.2mm every year that Australia’s National Tide Facility has taken measurements, it appears no island will be safe forever. 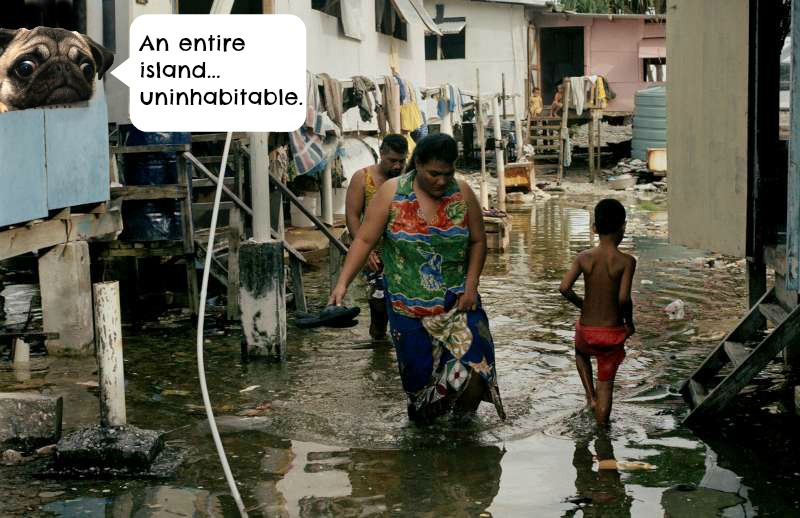 Known for being one of the smallest countries in the world at only 10-square-miles, Tuvalu consists of nine corral atolls, four reef islands and five true atolls. Located between Hawaii and Australia, this country has been considered the “canary in the coal mine” for climate change. It’s predicted to disappear in this century, largely due to the destruction of deforestation, overpopulation and rising sea levels due to global warming all causing damage to its underground water table. 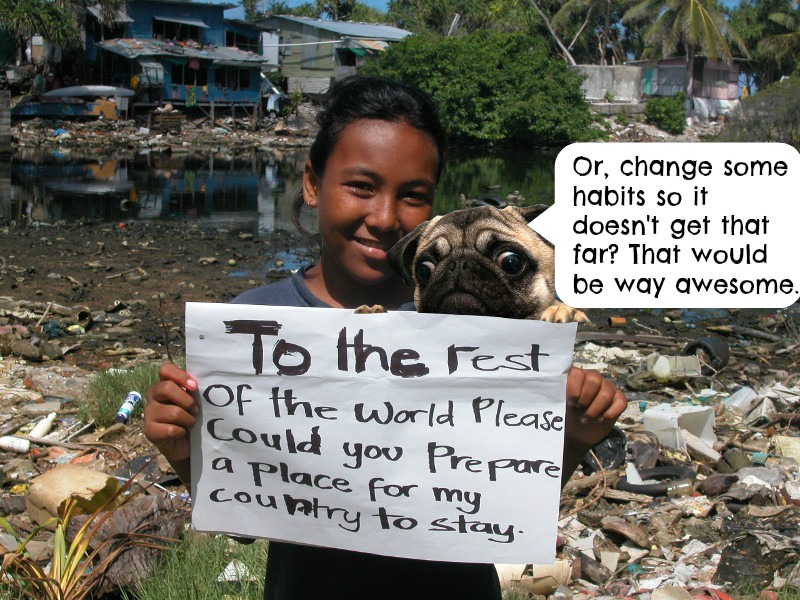 Cool Heads For a Hot Planet

One of the most densely populated places in the world, 160 million people live in a place one-fifth the size of France. They also contribute only .3 percent of the world’s greenhouse gas emissions, yet they face displacement as rising seas are poisoning their crops and flooding their cities. The general consensus is that by 2050, some 17 percent of Bangladesh’s land will be uninhabitable, which will displace 18 million people. 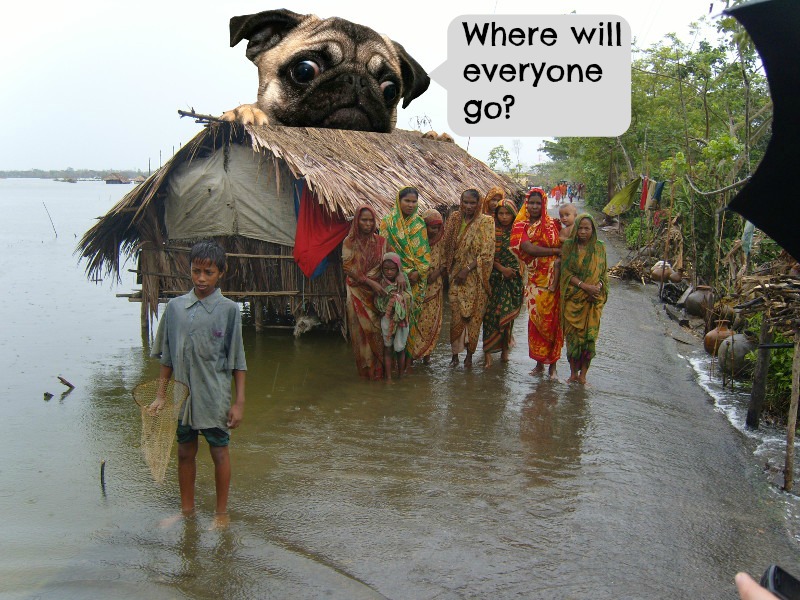