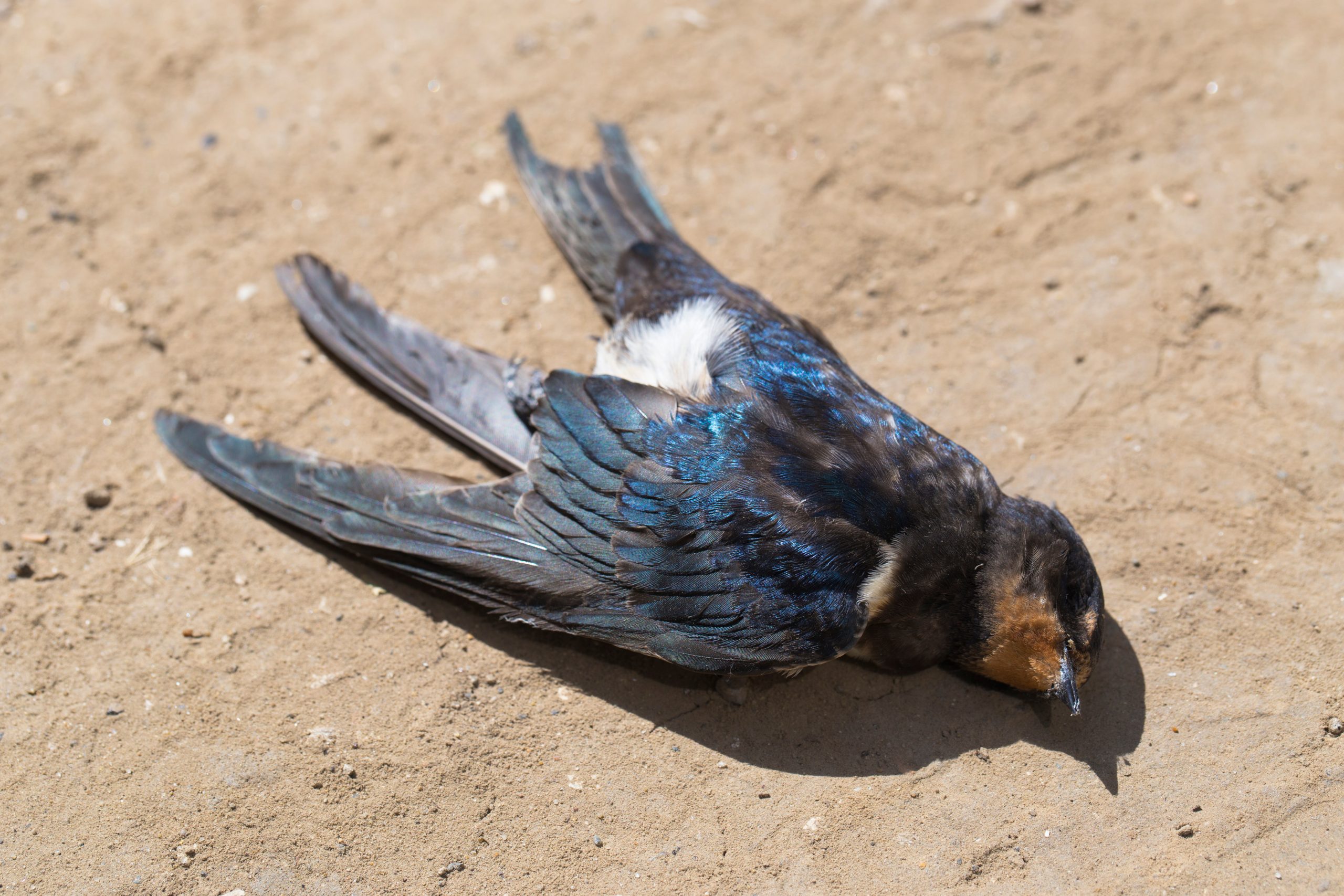 There are numerous ways in which we unknowingly cause harm to birds and other wildlife. Let’s take a look at some of the common practices that are harming bird populations around the world:

Wind turbines are a green energy source that helps offset our dependence on fossil fuels and our contribution to greenhouse gas emissions. In 2019 alone, wind energy avoided 198 million metric tons of CO2 emissions. While they have a positive impact on our battles against greenhouse gases, climate change, and other environmentally damaging occurrences, they are a detriment to our avian counterparts.

The wind industry is monitored on a state-by-state level, so implementing standards for the wind industry is rather difficult. Moreover, federal guidelines do not require protections for birds to be put in place. As Mike Parr, ABC’s Chief Conservation Officer, noted, the Federal Aviation Administration (FAA) uses resources and data to ensure that wind farms are not built in places that they would “interfere with aircraft,” so why can’t the US. Fish and Wildlife Service do the same for birds? Parr explains that many of our renewable energy sources are treating birds and other wildlife as “collateral damage” and we need to make strategic decisions to find better means of developing renewable energy sources.

Some people point to using offshore wind development as a catchall solution, yet offshore wind turbines are damaging to the marine ecosystems, waterfowl, fish, and other aquatic creatures.

So just how many birds are killed each year by wind turbines? Joel Merriman, ABC’s Bird-Smart Wind Energy Campaign Director, took a deep dive into the data and numbers behind bird deaths from wind energy. Merriman analyzed three studies on bird fatalities from collisions with wind turbines, ranging from 2013 to 2014, and providing numbers in the hundreds of thousands. The three studies all analyzed 2012 as their data set year and it was estimated annual bird mortality from wind turbines was anywhere from 140,000 to 680,000 in 2012. That is a rather large range, but averaging out the three studies, the number of birds will by wind turbines in 2012 is approximately 366,000.

A lot can happen in nine years. Since 2012, the renewable energy industry has boomed and although it is exciting that so many want to contribute to better, more sustainable practices in the energy sector, with an increase in wind turbines, there is inevitably an increase in bird deaths. There were 44,577 wind turbines in the U.S. in 2012, yet the U.S. Wind Turbine Database states that there are 67,814 today, which means that it would be safe to say there are significantly more bird deaths per annum with more wind turbines throughout our country.

Something to note is that the number of bird deaths recorded is just the tip of the iceberg; they are the ones that humans know about; the ones we can see. Merriman suggests that, along with another study that found dogs uncover a multitude of additional bird deaths, the number of birds that are killed by wind turbines is anywhere between 936,000 to 1.4 million each year in the U.S.

All things considered—under-recording bird deaths, accountability practices, federal and state regulations, and a booming renewable energy industry—birds are harmed through many of these practices. This does not mean that we should halt wind energy initiatives. As Audubon, who supports wind energy, points out, the number of bird deaths from colliding with wind turbines is a shadow compared to cats or building collisions

There need to be measures put into place to account for migratory bird paths and selecting locations that are less invasive to birds’ homes. ABC launched the Bird-Smart Wind Energy initiative with the aim of “protecting birds from poorly sited wind turbines.” They launched ten initiatives that would be beneficial for the wind energy industry to take into account.

In order to help mitigate bird deaths, you can take a look at where wind turbines may be placed and how they are affecting birds and wildlife in the area.

New Year’s Eve! The holiday sounds like all fun and games, but that’s not always the case for wildlife. The aftermath of the celebration in Rome, Italy for New Year’s Eve 2020 was not only felt by party-goers who rang in the New Year with copious amounts of champagne, but also by hundreds of birds who lost their lives.

The cause of death of the hundreds of birds, mostly starlings, is thought to be connected to A fireworks display. The fireworks took place near some green areas in the city, where the birds nest, fly, and go about their daily activities. The loud crashing and bright flashes of fireworks can scare animals and cause immense harm to them. “It can be that they died from fear,” Loredana Diglio, a spokeswoman for the International Organization for the Protection of Animals (OIPA) asserted. They can fly up together and knock against each other, or hit windows or electric power lines. Let’s not forget they can also die of heart attacks.”

This is rather heartbreaking to write, as I am a dog-obsessed individual who thinks each and every dog is a gift to this planet. Sadly, dogs can have a negative effect on native bird populations and the mere act of taking your dog for a walk in a nature preserve, on a wooded pathway, or just down the sidewalk can harm local bird populations.

The National Center for Biotechnology Information (NCBI) put out a study in Australia on dogs’ impact on birds in their native areas. The study found that walking your dog in a woodland area leads to a 35% reduction in bird diversity and a 41% reduction in abundance.

Dogs are animals that innately carry their ancestors’ genes. The hunting, chasing, and ultimately catching their next meal is hardwired in their brains. A study from the late ‘90s found that the survival rate of chicks went up from 12% to 40% when dogs were banned from beaches where birds nested. In Santa Barbara, California, another study found that unleashed dogs disturbed over three times more many birds than leashed dogs.

By abiding by the rules of designated off-leash areas, keeping your best friend on a leash when they are out of the area, and keeping an eye on your furry friend, we can all help out the bird populations and allow them to thrive. As the Director of NYC Parks Wildlife Unit, Richard Simon, so eloquently states, “The problem with dogs I more of a problem with people. What your dog is doing is following its instinct. The dogs don’t understand the rules, people do.”

BBC noted that dogs are now thought to be a threat to almost 200 species. Some of these occurrences, humans cannot control, but please leash and unleash your dog when and where it is allowed in order to do what we can to help wildlife populations.

In fall 2019, the Meadowlands landfill that is located in Northern New Jersey was the cause for multiple birds’ wings being completely scorched. The burning of wing feathers, tail feathers, and birds’ feet isn’t new to this area, or landfills’ gas flares. Since 2016, many birds were also brought to the Raptor Trust in Morris County. One year later in fall 2020, observers and rehab centers noticed that more birds were being singed and permanently damaged from the open flares at various landfills. Birds that fly through the gas waves and get singed usually lose their ability to hunt and fly.

Landfills are trying to be more environmentally friendly by lowering the amount of methane that is going into the atmosphere, yet that process in itself is killing or permanently maiming birds: According to National Geographic, “Landfills use a device called a methane burner to convert the gas into water and carbon dioxide, which traps less heat in the atmosphere than methane. But as the burner’s flames shoot out of a tall exhaust pipe, or stack, at heights of up to 30 feet, they remain colorless—and birds can fly directly into them without warning.” Some landfills have put wiring or fencing around their methane burners to deter birds from flying over the gas flow.

Plastic pollution is a global issue. Plastic from California can make its way all the way to Hawaii, Japan, the beaches of Bali, and continue on a global journey. Like most wildlife, birds are greatly affected by the presence of plastic in the environment. Studies done from 1962 to 2021 found that 60% of seabirds have plastics in their stomachs. Another study of a sample of 100 pieces of plastic found on a beach in the North Sea. The Netherlands found that 80% of the pieces had peck marks on them, signifying birds’ attempt to ingesting the plastic. A study released in May 2020 found that microplastics were present in both terrestrial and aquatic birds of prey throughout Florida. Throughout the study, 63 were analyzed and over 1,200 pieces of plastic were found in their stomachs. Notably, the most common kind of plastic that was found in the birds’ stomachs, a whopping 86%, was that of microfibers that make up much of clothing items.

In order to combat this issue, it’s important to be mindful of our waste and clothing choices so that we can reduce the amount of plastic entering the natural environment.

The majority of homes have windows, all buildings have windows galore, and many buildings in urban settings are being made entirely of glass. This poses an enormous problem within the avian communities. Conservationists and scientists estimate millions of birds are killed every year from windows; 54-76% of collisions with windows are fatal. Notably, with their territorial behavior and aggression, mockingbirds die at higher rates than other birds because they will attack their reflection.

Birds find windows, mirrors, lights, amongst other unnatural objects distracting and obtrusive to their flight pattern. Audobon recommends that people build up lining in your windows or put dot stickers on your windows. Audubon also has a campaign to urge Congress to pass a bill that would promote “bird-friendly materials and design features” in all federal buildings.

There have been three billion birds lost in North America in the last 50 years. There are so many things we can individually do to help birds in our lives. Find out who your representatives, local elected officials, and council members are here in order to get your voice heard.

We can all do something every day to help the avian communities that fill our skies, trees, and ears with beauty! Sign these petitions to be an advocate for the birds: