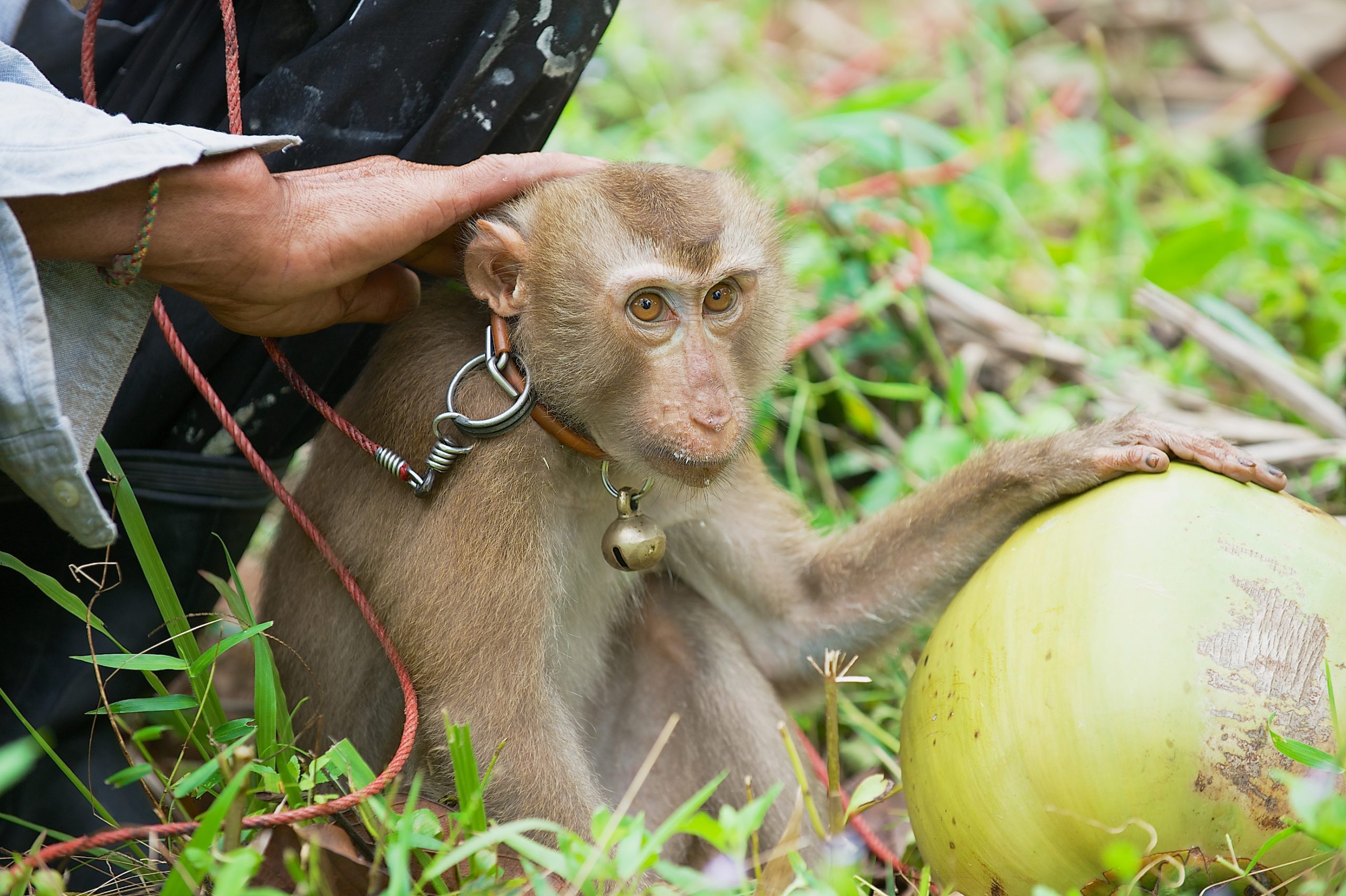 Determining which products and foods are “good” and those that are not is not always simple. Many seemingly good products are secretly harming our animal friends and the environment more than most people are aware. Here are some of them:

This video of an orangutan climbing a tree and through the bush, trying to escape a clear-cutting crane, demonstrates the heartbreaking reality of palm oil production. It is difficult to watch, knowing that so many of us are contributing to this habitat loss, but I strongly encourage you to watch it.

Palm Oil is found in many foods, from peanut butter to pizza dough, as well as beauty and household products, from lipstick to detergent. Sadly, palm oil is a secret killer of Orangutans and other animals, as well as a major cause of deforestation around the globe. Palm Oil in its “raw form,” coming directly from palm fruit that is found throughout the African continent and Southeast Asia, is in fact vegan. However, the process of producing palm oil destroys the environments of many animals and ecosystems. A 2018 study found over 100,000 orangutans disappeared from Borneo over a 16-year period. A staggering figure to conceptualize.

Orangutans are not the only animals that are suffering under palm oil production; monkeys, rhinoceros, tigers, leopards, elephants, and bears are also suffering. The habitat loss is catastrophic and the ecosystems where these animals live are diminishing at a rapid pace. Furthermore, Palm oil-driven deforestation releases thousands of tons of carbon dioxide into the atmosphere.

The Roundtable on Sustainable Palm Oil (RSPO) rating aimed to highlight sustainable practices in the palm oil production arena, yet many believe RSPO has not gone far enough to limit deforestation, along with human and animal harm. There are skeptics regarding how the initiative disciplines companies that don’t uphold the standards. Recently, Greenpeace International even released a report, Burning down the house, revealing that companies who are members of the Roundtable on Sustainable Palm Oil (RSPO) have sourced their palm oil from producers that are tied to the fires in Indonesia.

Avoiding palm oil altogether is extremely difficult, considering how ubiquitous it is and how many names the oil hides behind. Thus, we also need to focus on pushing companies to stop using palm oil and instead invest in sustainable alternatives. Sign these petitions to do so:

Avocados are a beloved vegan staple. Unfortunately, they are tied to various issues of production in terms of their impact on animals, humans, and the environment. The crop itself may be a source of violence, human rights abuses, and cartel activity in Mexico. As the political landscape has shifted in Mexico over the last 20 years, the cartel business has grown, “splintering” from several big cartels into dozens of smaller cartels. The Mexican cartel industry has shifted from focusing on drug exports to also focusing on crops and notably, the booming international avocado market. Many avocado farmers have been beaten, threatened, and even killed by cartel members who extort money from them in exchange for “protection.” Moreover, focusing on avocados’ categorization as a vegan food, there are some issues regarding the involvement of bees.

The practice of ‘migratory beekeeping’ is a common practice within major farming operations and it can be problematic for some vegans. Farmers relocate and move bees in order to pollinate their various crops. The relocated bees are moved from farm to farm, and state to state, pollinating and contributing to the production of many different crops. Categorizing such crops as vegan can be dicey as many argue that relocating bees leads to overexertion and exploitation of the insects. Insofar, some argue that the consumption of avocados, almonds, butternut, and other crops is not truly vegan. Yet others argue that it depends on your “ethical rationale” and how far a self-proclaimed vegan will go to live a completely ethical lifestyle, e.g. not harming any living creature. Like many other dietary and ethical choices, it is wise to explore all of the options and take in all of the information available to make the best decision for yourself. There are dozens of other crops that use beekeeping measures to be produced and cultivated. If we were going to exclude all crops and foods where beekeeping, migratory or not, is used, we would be limiting our consumption of many fruits, vegetables, and grains. To help save the bees, try eliminating honey from your diet (there are great vegan alternatives!), plant bee-friendly gardens, buy organic, don’t use pesticides, and sign this petition to tell the EU to uphold its ban on neonicotinoids.

The sweet nectar from agave is a sought-after replacement for honey. Vegans around the world are trying to save bees by boycotting honey, but replacing honey for agave may be harming another animal: bats.

The agave plant, more specifically, its nectar, is a common food source for bats. NPR released a piece in 2017 that highlighted the detriment tequila production was having on the bat population. Mike Daulton, the Executive Director of Bat Conservation International, spoke to NPR about how bats and tequila are “intimately tied.” Unfortunately, because so many agave stalks are needed to meet the demand, farmers often cut and clone agave plants rather than allowing them to naturally reproduce through pollination. By not allowing the plants to flower, the bats have no nectar to consume. The close connection between these vital pollinators and agave means that “industrial agave farming adversely affects both plants and bats.” In just the last decade, the population of the Mexican long-nosed bat has declined over 50%. Bat Conservation International has vowed to plant over 100,000 agaves to restore the bat populations in the “migratory corridors” between Mexico and the Southwestern USA.

Other sources believe agave is vegan and neglect to mention its impact on bats. Similar to palm oil and avocado production, it is best to know what occurs in the production of agave to better understand its legitimacy as a vegan food source. To help save these bats, make sure to only purchase tequila that is bat-friendly certified.

The sourcing process for many coconut distributors is not ethical, degrades the environment from which they come from, and like some of the other aforementioned items, the sourcing harms animals. In 2015, NPR wrote a piece on coconut products and their sourcing practices. The article stressed the notion that if you consume coconut products coming from Thailand, they are most likely exploiting monkeys in the process. Other countries join Thailand in the training of monkeys for labor, including Sri Lanka, Malaysia, and India.

In late 2020, PETA released a report that monkeys were still being used for labor in the coconut production industry. Their investigation revealed that these poor animals were taken from their families and homes as babies to be kept chained or in a cage for the majority of their lives. At the farms, training facilities, and competitions, they suffered physical abuse in addition to being forced to climb trees for coconut picking.

National Geographic recently released a piece asserting that monkeys are still being used, although pressure has mounted on companies, retailers, and the Thai government to halt the use of monkey labor to collect coconuts. Some retailers have dropped brands, notably Chaokoh, that still use monkey labor, but Walmart and Kroger still sell Chaokoh products. NatGeo also noted that an internal investigation of Chaokoh did not find evidence of monkey labor and the Thai animal welfare laws do not apply to wild animals, and the Pig-tailed Macaques that are used for coconut picking are considered to be ‘wild.’

Sign this petition and demand that Walmart, the United States’ largest retailer, drop all Chaokoh products immediately. Before buying coconut products, make sure that the brand does not use monkey labor.

What you need to know about Fair Trade

The emblem many of us look for when purchasing food, beauty products, clothing, and many other items may not be as ethical as we thought. The World Animal Foundation provides a great overview on the ethics of fair trade and what fair trade “fails to address if the interests of other sentient animals,” humans, and environments. The fair trade emblem is placed on organizations and companies that encourage and promote fair working environments for humans, but neglect animals’ rights, their conditions, and their existence. Furthermore, animal agriculture has a hugely detrimental impact on the environment, which ends up harming the workers that “fair trade” standards are supposed to protect. It  “threatens human health, degrades rural communities,” and contaminates water where these workers live. Animal activists argue that veganism and fair trade should go hand in hand. They are both trying to better the world, making it a more just and equitable place for all beings.

Furthermore, some “fair trade” claims may simply be greenwashing. It’s important to look into the verifications and certifications that a company has. Ask questions and make sure they are tied to a reputable organization with a clear set of standards, and of course, make sure the product is vegan.

Dig deep! Do your research, learn what is going on around you, and be careful of greenwashing practices. Greenwashing is when a company puts labels or titles on its products to entice environmentally-minded individuals to purchase their products. Many companies are now putting ‘vegan’ or ‘gluten free’ or a label that appears to be a ‘fair trade’ label, but may not be a member of the certified label’s family.

Purely ethical consumption is an ideal that many of us are trying to move towards. Whether we are running towards that ideal or if we are just starting out on this journey, many of us need some assistance. There are numerous barriers in our way when trying to live fully ethically—availability, affordability, accessibility, etc. so the more you know, the better. I encourage all readers to dig deeper and find what makes the most sense to you for your dietary and ethical choices. It’s crucial that we all become aware of the realities that surround us, and push on fighting the good fight for a more equitable and ethical world!