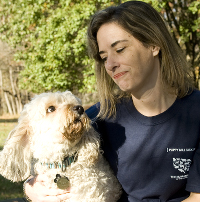 Kathleen Summers is Director of Outreach and Research for the Puppy Mills campaign. During her years at The HSUS, she has built the campaign’s research base, assisted in investigations and rescues, and testified before state legislatures in support of stronger laws. Summers and her rescued puppy mill dog, Brandy, appeared briefly in "Madonna of the Mills," a documentary about puppy mills that aired on HBO in 2011 and 2012.