Would a Captive Lion Ever Smile Like This? Here is Proof That They Belong in the Wild (PHOTO)

Few of the planet’s animal species are more admired and revered than the lion. Since ancient times, these animals have been associated with qualities such as grace, nobility, majesty, power, and breathtaking courage. They are notable for being the only big cat species to live in groups (known as prides), rather than leading solitary existences. In the wild, African lions live in groups of around fifteen individuals, consisting of five to ten females and cubs, and two or three males who are generally brothers. Usually, two or more females in a pride will give birth to cubs at the same time, and the new babies are then raised by the entire pride. Cubs become capable hunters by the age of two years old, and are considered to be adults at the age of five or six. Another interesting fact about lions is that they are the laziest out of all the big cats, spending around sixteen to twenty hours each day sleeping and resting!

Sadly, African lions are now in serious trouble. They once roamed throughout most of the continent, but are now confined to the sub-Saharan region. In recent decades, habitat loss and trophy hunting have been enormous issues hindering their survival. Last summer, the brutal killing of Cecil the lion by U.S. dentist Walter Palmer provoked outrage among animal lovers across the world. His death helped shine a global spotlight onto the many threats being faced by his species. It also led a group of U.S. Senators to draft the Conserving Ecosystems by Ceasing the Importation of Large (CECIL) Animal Trophies Act, which aims to ban the import of African lion hunting trophies into the U.S.

However, another, even more, alarming threat has emerged in recent years: canned hunting. In canned hunting facilities, lions are bred specifically to one day be pulled out into an enclosure and shot at point-blank range by humans … and the terrible news is that there are now about 200 such breeding facilities in South Africa alone. Not only do they supply lions to the canned hunting industry, but they have also sold some of their animals to zoos.

Putting lions into a zoo, roadside animal attraction, circus, private household or other captive facility deprives them of everything that would normally give their lives meaning: being raised by their mothers; exploring their territory; playing with other pride members; learning how to develop hunting skills; or even simply going about their lives without being forced to entertain humans or learn inane “tricks.”

A study published in the Nature journal by the University of Oxford’s Department of Zoology found that lions were inherently unsuited to a life in captivity. Researchers ultimately concluded that “the keeping of naturally wide-ranging carnivores should be either fundamentally improved or phased out.” One way to fundamentally improve the situation for lions who cannot be released back into the wild, due to health problems or lack of survival skills, would be to retire them to a reputable, spacious sanctuary where their safety and health can be monitored, but they will be guaranteed as much independence over their own lives as possible, and will never be put on display as objects of humans amusement.

Lions were never meant to exist for the sake of our pleasure and convenience, and they certainly do not belong in captivity. A beautiful image of two wild lions posted by the International League of Conservation Photographers (ILCP) makes this abundantly clear.

Have you ever seen such a glorious smile? 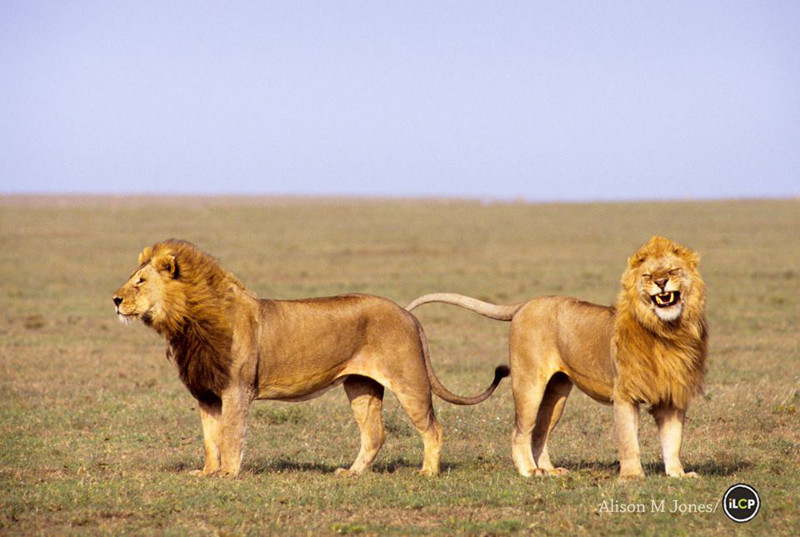 It is difficult to imagine a captive lion ever showing such joy. We can only hope that some day, all Lions will be able to lead lives as natural, carefree and unrestricted as these two … and that the species will be saved before it’s too late.