After Escaping Life on a Farm, Winifred P. Piglet Learns to Enjoy the Simple Things 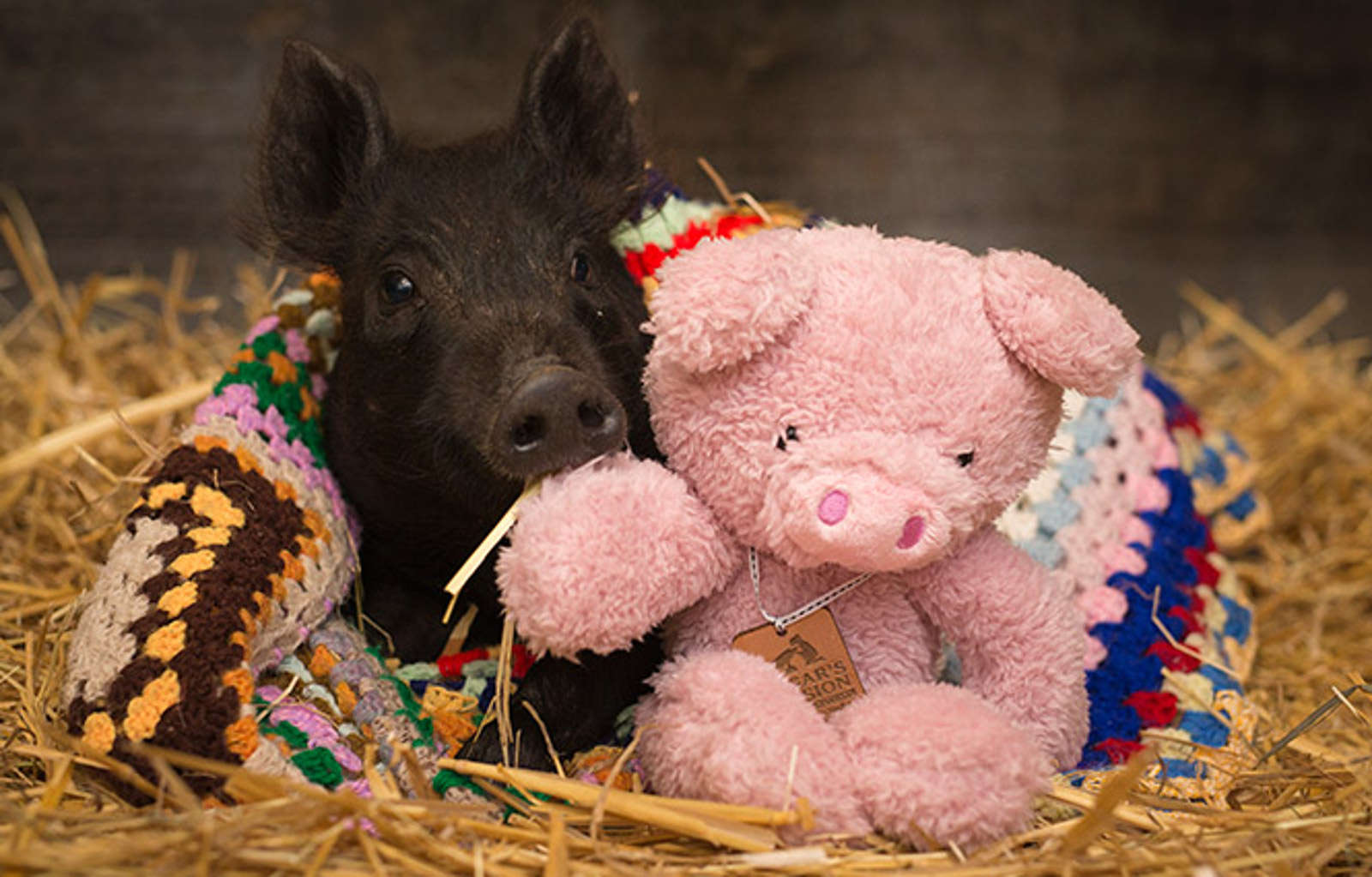 When you think of a pig, you probably imagine a happy-go-lucky little animal rolling around in a giant mud puddle. Perhaps with this in mind, you create a mental picture of what a “pig farm” would look like – a joyful place where animals are allowed to root through the mud and run through fields until the inevitable day they become incredibly fat and are woefully sent to slaughter.

In reality, a pig farm bears no resemblance to this imagined farm. In a standard factory farm, where the vast majority of pigs raised for food in the U.S. reside, thousands upon thousands of animals are cramped in filthy conditions where they spend their live in pain and fear. Mother pigs are confined to crates so small that it is unlikely they will ever get to see their own tails in their lifetimes. Pigs are among the most intelligent animals in the world, able to learn tricks, respond to their names and solve puzzles … yet, in the world of animal agriculture, they are only valued for their market worth.

While this might be the way that the majority of the world views pigs … there are many highly compassionate people who dare to think differently about pigs. Edgar’s Mission Farm Sanctuary is filled with kind humans who think of animals as being equal in intelligence and worth to people. Every animal who comes to live at this wonderful safe haven is regarded as a someone, not a something, and afforded a name and the right to live happily on their own terms.

A Bold Escape for a Small Piglet

Winifred P. Piglet was clearly not satisfied with the life on a pig farm that her fate delineated. After escaping from her original home, Winifred was discovered wandering through a suburb of Melbourne, Australia. Seeing as the streets are no place for a young piglet, she was apprehended by local animal control and brought to the Lost Dogs Home. From the name alone, you can probably tell this is no place for a piggy either. However, as there was nowhere else for her to go, she was treated like any stray dog who would enter the shelter and sadly slotted on the euthanasia list. Kyle Behrend of Edgar’s Mission tells One Green Planet that animals can spend between eight to 14 days on this list before they are “put down.”

Thankfully, the shelter called over to Edgar’s Mission just in time to save little Winifred piglet from this sad fate and she was taken to the sanctuary to start the new life she so courageously ran away from home to find. 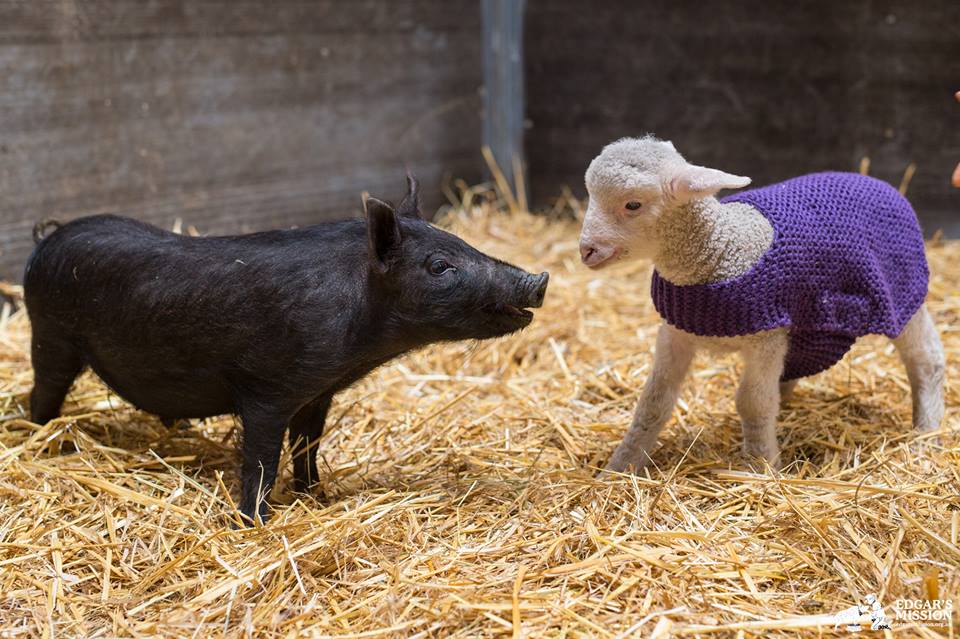 When Winifred arrived at her new farm sanctuary home, it seemed she recognized that her life had taken a turn for the better. She was a bit timid at first, but that initial trepidation was almost immediately replaced with her new found gusto for life. 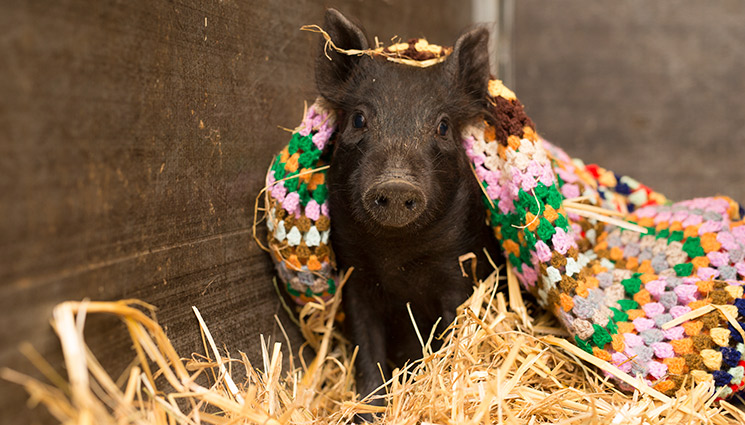 Behrend explains, “Since arriving at the sanctuary the timid little piglet wasted no time in weaving everyone around her tiny trotter, including Ruby Dog.”

She had spent a period of time in a dog shelter and perhaps she still smelled a little like a dog when she came to Edgar’s, sparking Ruby Dog’s fascination and wonder with this strange looking puppy! 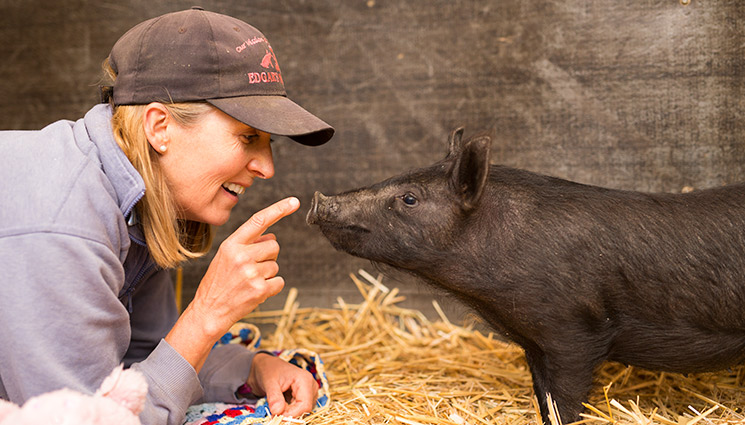 “Ruby is just so fascinated with Winnie,” said sanctuary Director, Pam Ahern. “She spends much of her day just sitting outside Winnie’s yard, and when we move Winnie to her night time stable Ruby bounces along next to us.”

But given the adorable little face and tenacious personality that makes up Winifred P. Piglet, we can’t really blame Ruby for wanting to spend as much time as possible with this little piglet. 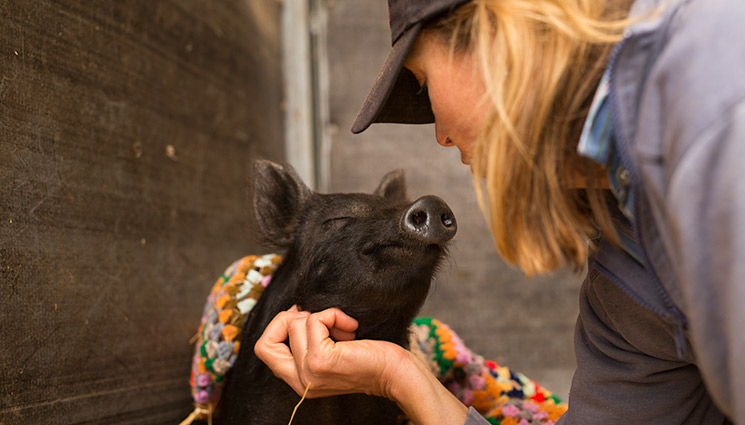 As she adjusts to life at Edgar’s, Winifred is learning to enjoy the finer things in life. While Behrend posits that all food is Winnie’s favorite, strawberries and apples have become her most sought after snacks. 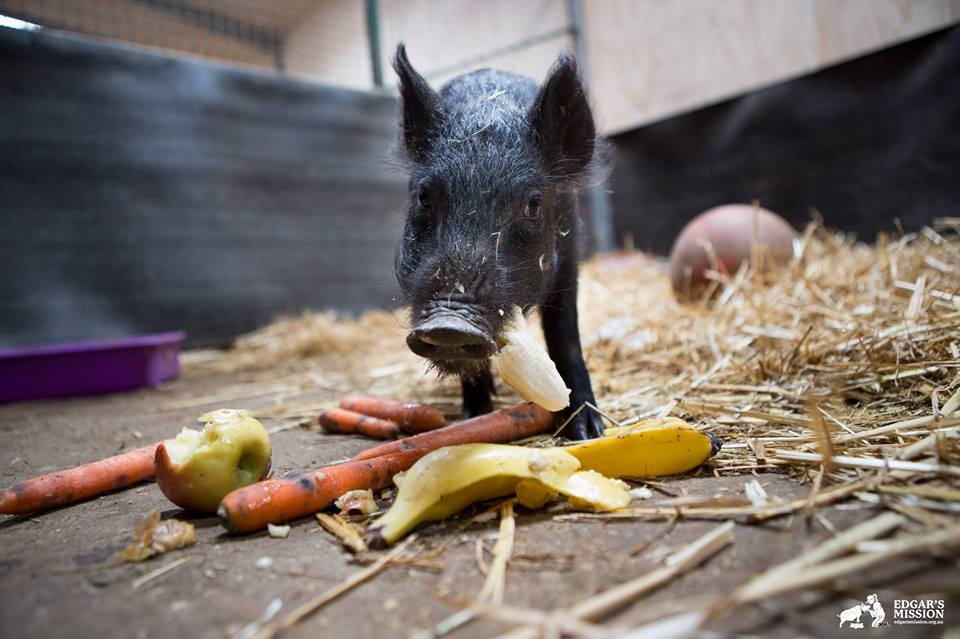 When she is not rooting for extra snacks or hanging out with Ruby Dog, Winifred can be found playing, pretty much with any object that crosses her path. Life is what you make it after all, so why not make even the mundane tasks seem fun? Just check out this instructional video from Winnie on how to have an amazing time playing with an empty bag.

When you get to see this little piglet in action, it certainly changes the way that you think about farmed animals. Winifred is more than just one pig who is the same as thousands of others, she is an individual and deserves to be treated as such. Although she possess many of the same traits as your dog, such as loyalty and the ability to love and have fun, most people see her as a commodity. Little Winifred might be small, but she is a purveyor of a very important message: farm animals are living, feeling creatures too.

Edgar’s Mission’s motto is, “If we could live happy and healthy without harming others, why wouldn’t we?” Share this post and ask others this question.