Why You Should Never Buy Ducklings 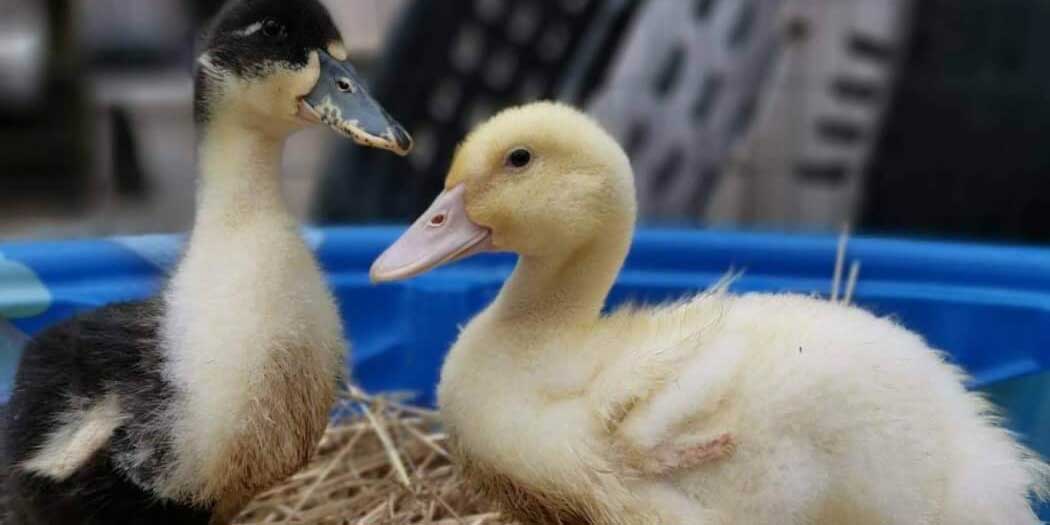 In my six years as a People for the Ethical Treatment of Animals (PETA) staffer and since founding Long Island Orchestrating for Nature (LION) nearly a decade ago, I’ve rescued thousands of ducks and ducklings. I’ve come to the aid of so many ducks, chickens, and other fowl that my PETA coworkers call me “the bird guy.” So I’m hyperaware that, yes, ducklings are cute and cuddly. But I can confirm from firsthand experience that there’s no holiday, no photoshoot, and no amount of good intentions that could justify buying ducklings (or any animals) as gifts or for any other purpose. Case in point: the man who surprised his grandkids with baby ducklings earlier this month.

“Could it really be that difficult to care for ducklings?” It’s the question Hewlett, New York, resident Giancarlo Mazzanti surely asked himself prior to purchasing two baby ducklings from a roadside farm peddling animals as though they were postcards, hoping to surprise his three grandchildren for Easter. Although this grandfather undoubtedly meant well, his “gift” quickly turned disastrous—for him and the birds. He’d bought the pair, whom he named Coco and Mimi, weeks prior to Easter Sunday—and all that time, the ducklings were kept in a bathtub in his home. They needed proper nutrition and warmth and had to relieve themselves often, as ducks do—so Mazzanti cleaned the bathtub twice a day and said he fed the ducklings constantly. It wasn’t long before he learned a lesson that countless others before him had also learned the hard way: Ducks are not “pets.”

The grandkids’ parents ultimately rejected the ducklings, and Mazzanti “just couldn’t take care of them anymore,” he admitted. He contacted several organizations for help, with no luck, until—thankfully—he reached out to LION, my advocacy organization that campaigns for animals from New York City to Montauk.

Upon rescuing the two ducklings, I discovered that both had trouble walking—an affliction undeniably caused by their time spent slipping and sliding in their bathtub “home,” where their legs developed improperly. This is just one example of the challenges that come with attempting to care for ducks and ducklings and the suffering they can endure when they’re denied what they need.

Where Do “Pet” Ducks Come From?

Domestic ducks are typically three to four times the size of wild ducks and often have unnatural colors—such as Pekin ducks, who are all white—that prevent camouflage. These ducks may also be very docile and have small wings, making it impossible for them to attain adequate vertical flight. Domestic ducks typically come from massive hatcheries where their parents are confined by the thousands to cramped, soiled sheds. There are no ponds to swim in and no room to roam and forage—activities that ducks instinctually yearn for.

Like male chicks in the egg industry, male ducklings—who don’t lay eggs and therefore aren’t as desirable in the pet trade—may be ground up alive or otherwise killed. When they’re just a day old, ducklings are shipped across the country to pet stores and even hardware stores like Tractor Supply Co. (where they’re sold like pieces of equipment), typically without food and water. Because so many of them die during the harrowing journey, some hatcheries even provide bonus ducklings, an apparent attempt to keep buyers satisfied.

Rule number one when caring for an animal companion: No one is a “pet”! Animals are individuals with unique personalities and complex needs, and you are not their owner—you’re their guardian. It’s your job to provide your companion(s) with love, food and water, shelter, and proper care, and when it comes to ducks and ducklings, this is far more complicated than most people realize.

Wild ducks are extremely sexually aggressive during mating season, but many people don’t know that domestic ducks (those bred by humans) can exhibit sexual aggression year-round, resulting in death or serious injuries caused by sexually aggressive males to females or weaker male ducks. This means that taking precautions like separating males and females (or males and weaker males) at night and even sometimes during the day is vital.

Ducks have specific needs and require just as much veterinary care as any dog or cat. These birds actually need specialized veterinary care from someone with avian expertise, which can be more difficult to find than a doctor for Fido (as well as more costly).

They also need specialized feed. Generic fowl feed (like what chickens are fed) won’t offer ducks or other waterfowl adequate nutrition—feeding this to ducks will result in disabilities, such as crippling and deadly niacin (vitamin B3) deficiency, wry neck (when the head becomes twisted or tilted), or angel wing (when flight feathers grow too fast and twist as they grow away from the body). The junk food for sale at many agricultural stores is exactly that—junk. I feed the ducks in my care waterfowl-specific feed, which has to be supplemented with niacin when they’re young.

In the first few weeks of their lives, ducklings require proper warmth—often brooder plates or heat lamps, the latter of which have been known to cause house fires. After that, ducks can’t be kept indoors 24/7—not only would it be a mess, it would also cause them to become too dependent on their caregivers and get extremely stressed when they leave. Plus, hard-surfaced floors like tile or hardwood may cause them to develop foot issues, such as bumblefoot infection, which can be deadly. As you’d see at many sanctuaries, domestic ducks must be locked inside predator-proof coops at night for their protection. But they also need ample time and space to explore the outdoors as well as access to a large, clean body of water. In the case of artificial ponds, a filtration system is required. Perhaps now you’re thinking, “kiddie pool,” but these are cautioned against—they need to be changed and cleaned twice per day, which is why proper ponds are strongly recommended. Outdoor enclosures should also provide shelter from the sun and rain. And as Mazzanti found out, ducks typically relieve themselves about every half-hour, and they can’t be trained to do so in a particular spot, so sanctuary staff clean their enclosure, food and water bins, and swimming area every single day.

Here’s something else that shocks many new, unprepared duck guardians: The birds can be loud and territorial. Your neighbors may not love the noise, and if you have visitors, beware—ducks have been known to bite strangers who come into their area.

What Happens to Ducks When There Is No LION Rescuer?

Ducks can live for 20 years, but many purchasers’ patience doesn’t last nearly that long. Those who find that they’re unable to care for ducks or ducklings, as many do, cannot simply return them to nature—doing so is cruel and, in most municipalities, illegal. In New York state, it’s an offense punishable by up to a $1,000 fine, a year of incarceration, or both. See, domestic ducks are bred for the farming industry (their flesh is turned into food and their down feathers are stuffed into pillows and jackets), which means they typically have tiny wings, large bodies, and no camouflage—all attributes that make them unable to forage properly, escape predators, fly, or migrate. When abandoned, they’re literally sitting ducks for other animals and cruel humans. Many rejected “pet” ducks die the same day they’re dumped. And deserting them harms more than the ducks themselves—local ecosystems may suffer, too, as these birds can spread disease to wild flocks and can disrupt local bird behavior.

What Should You Do if You Find an Abandoned Duck?

If you find an abandoned domestic duck, the best thing you can do is contact a local wildlife rehabilitator for help with rescuing and placing the bird with a rescue organization or sanctuary. Although most wildlife rehabilitators won’t rescue or accept domestic fowl—as these must be placed with a rescuer, not rehabbed and released—they may be able to point you in the right direction. Many states have a department of natural resources that provides an online directory of wildlife rehabilitation centers by counties or cities. California’s, for example, is available at wildlife.ca.gov and lists by county. Alternatively, you can contact your local Society for the Prevention of Cruelty to Animals office or animal control authority—these groups may only respond to calls about dogs and cats, but they can likely point you in the right direction.

If you’re on or near Long Island and you find an abandoned domestic duck or another animal in need, please visit HumaneLongIsland.org to message LION with the details.

What to Do With All Your Newfound Duck and Duckling Knowledge

Now that you know the challenges that come with caring for ducks, if you know you have the commitment, devotion, and patience necessary to become a guardian, please adopt—never buy a duck or any other animal. Visit Petfinder.com or message LION on Facebook for help finding adoptable ducks near you.

If you’re in search of a prop, gift, classroom activity, or toy, please choose something (not someone). Perhaps a stuffed animal or vegan duck-shaped chocolates would make a good gift—or teachers could have students plant seeds, care for them, and watch them sprout.

Visit PETA.org and HumaneLongIsland.org to learn more about the work that my colleagues and I do for ducks and other animals, both on Long Island and around the world.