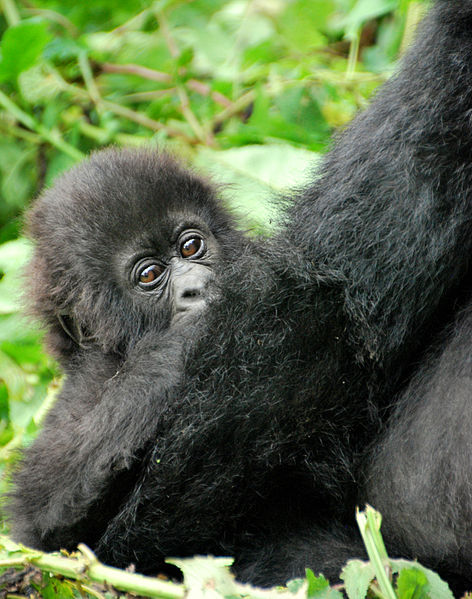 In 1978, the corpse of a young silverback gorilla was found. His heart, head and hands had been removed. The dead gorilla was Dian Fossey’s beloved Digit. Remember him, from Gorillas in the Mist?

Fifteen years earlier, Dian Fossey, a young scientist, took her first trip to Africa. Traveling around Kenya, Tanzania, Congo and Zimbabwe, she was soon acquainted with the infamous archeologist, Louis Leakey. With his encouragement, she accepted the offer of researching endangered gorillas of the Rwandan Forest. Researching primates, Leakey believed, would benefit the study of human evolution. Fossey, as a result, lived among the mountain gorillas. She would live here for the remaining twenty years of her life.

After spending hours and hours with this fascinating species, she soon developed an extraordinary bond with the gorillas. We can thank Dian Fossey for building the groundwork for understanding of these animals. From Fossey we have a better understanding of the complex emotional and social abilities of these animals, but we now also know the very real threats facing these animals. The mountain gorilla population has dwindled down to 880 remaining individuals who are teetering on the edge of extinction, largely due to poaching. Building on what Fossey has taught us about these magnificent creatures, it is more important than ever that we channel her passion for these animals into their protection.

Drawing Connections Between Gorillas and Humans

During her extensive research, Fossey made some fascinating discoveries. One was that gorillas were by no means violent tempered. In fact, quite the opposite. Research showed the great kindness gorillas showed to each other. Gorillas are on the whole peaceful creatures and only show bouts of violence when protecting an infant.

Fossey also discovered that each gorilla possessed a distinct personality. This was why she named each one she encountered. Another observation made was that mountain gorillas share strong emotional bonds with family members. They even mourn, like us. According to Fossey, gorillas share many human behaviors such as playing and tickling.

The majority of the mountain gorilla population resides in the Virunga mountains, within the bounds of Virunga National Park. This national park spans a number of African countries, and has unfortunately seen an enormous amount of violence in the past two decades.

In the early 1990s, Fossey was forced to leave Rwanda when a civil war in Rwanda erupted. The war posed many threats to the gorilla population. Waves of refugees were sent into the region around the Virunga Mountains parks which has led to excessive poaching and gorilla habitat destruction. Rebels have also taken over areas of the park, which is home to half the mountain gorilla population. Conservation work in the park is a dangerous duty. More than 140 Virunga rangers have been killed on the front line of conservation work, since 1996.

This important work to protect the mountain gorilla population spans into present day. The residual conflict from the Congolese Civil War and new threats from oil exploration are currently putting further stress on efforts to conserve the mountain gorilla population. Virunga National Park is home to the world’s only sanctuary for orphaned gorillas, but as conflict closes in on their territory, questions over whether this important work will be able to continue have been raised.

Human Encroachment and the Mountain Gorilla

To protect the remaining 880 mountain gorillas, we must first understand the specific threats they are facing. Poaching, habitat loss, disease and charcoal mining, exist as the main threats to gorillas and contribute to their decline both directly and indirectly.

Because the population is increasing, humans are moving into areas closer to mountain gorillas. Land is cleared for agriculture (to feed human beings) and as a result, mountain gorillas are losing their homes. Living in closer proximity to humans puts mountain gorillas more at risk from contracting human diseases and illnesses. Even catching the common cold can lead to deaths in gorillas, as they experience a human illness in a far more severe form.

Charcoal harvesting in Virunga National Park contributes to deforestation in the park. Although these operations are largely illegal, the local community relies on charcoal for fuel. Illegal trapping also threatens the mountain gorilla. Although poachers sometimes kill primates for body parts, normally gorillas aren’t the main targets, they end up caught in snares and traps that are put down for other animals.

Dian Fossey was a passionate woman and that passion helped to save the mountain gorilla species. She once said, “When you realize the value of all life you dwell less on past and concentrate more on the conservation of the future.”

We can’t change what has already happened and the events that have lead to the decline of the mountain gorilla species, but we can and we must, as intelligent and compassionate human beings, change the future.

You can help save the gorillas by supporting the efforts of conservation groups including Dian Fossey’s Gorilla Fund. Adopt a mountain gorilla or make a donation. Or you can even take a trip to visit the gorillas, here. To learn more about the mountain gorilla and how to help them, click here.