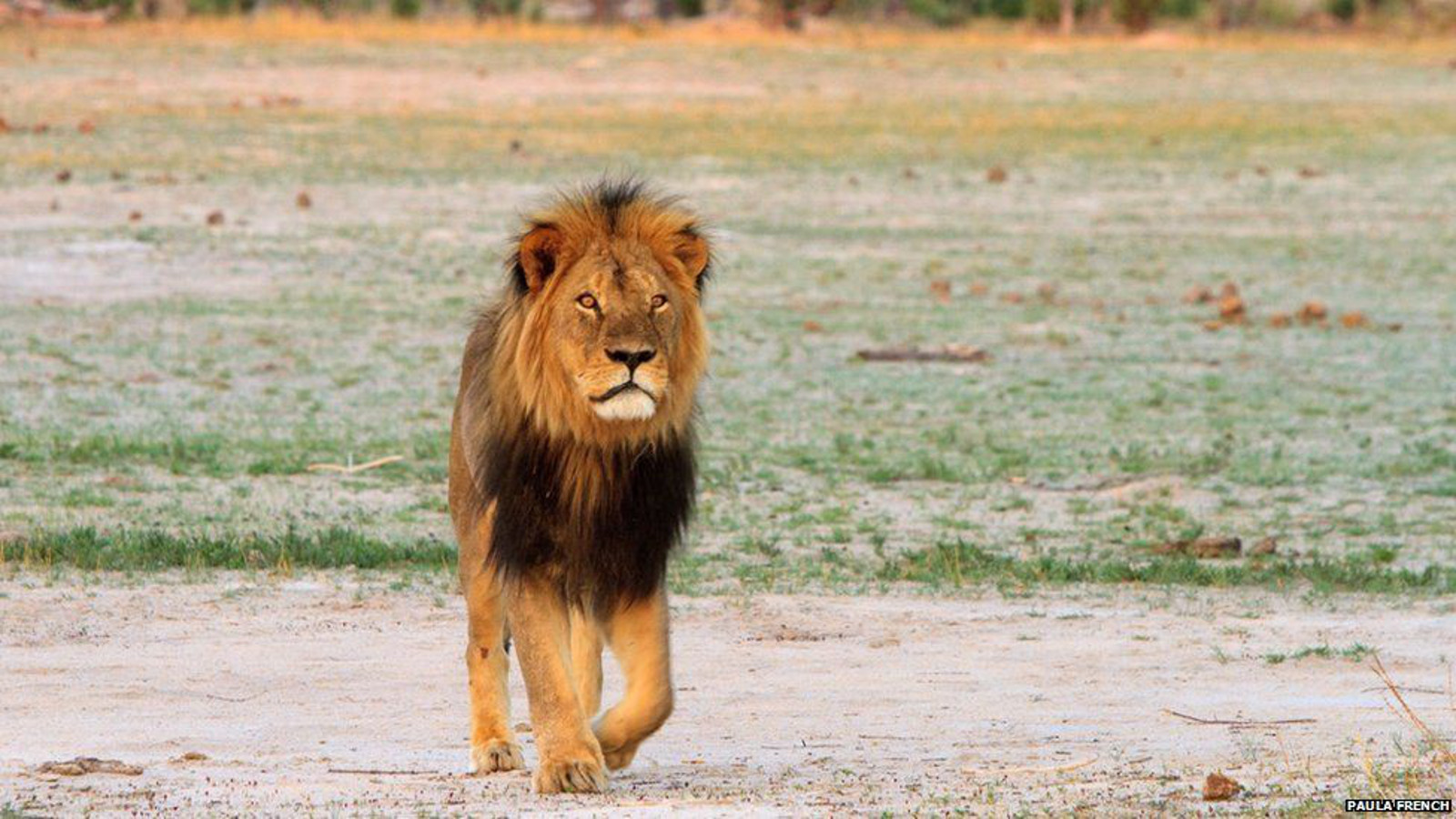 Unless you’ve been sequestered on the back side of the moon, you probably know by now that, in early July, Walter Palmer, a 55-year-old dentist from Minnesota, illegally killed Cecil, a lion who had lived in Zimbabwe’s Hwange National Park. Cecil, age 13, wore a radio collar installed by researchers from Oxford University. He neither feared nor threatened human visitors to the park, including numerous tourists who photographed him, often as he strolled down park roads or rested in the middle of the road, truly looking like a king. With his distinctive black mane, he was surely among the most charismatic of the rapidly vanishing charismatic megafauna of Africa — a handsome cat, indeed.

Palmer allegedly paid more than $50,000 to Bushman Safari, whose owner, Theo Bronkhorst (reportedly “a professional hunter” and member of the Zimbabwe Professional Hunters and Guides Association [ZPHGA]), is now “suspended indefinitely” from ZPHGA, pending investigation of the hunt that took Cecil’s life. Bronkhorst and the owner of the farm where Palmer shot Cecil have been charged with poaching offenses. Cecil had been lured from the relative safety of the park by tying a dead animal to a vehicle, and reportedly using a “spotlight” to illuminate the lion.

It has been further reported that Palmer’s arrow only wounded Cecil, who was then tracked for 40 hours before being found, shot with a rifle, skinned, and decapitated … the headless body left behind.

The poachers then tried to destroy the radio collar, presumably realizing it could provide evidence of their perfidy. But, they bungled that, too, and Cecil’s remains were found, and charges were laid (although not against Parker, who, as of the time I am writing, is in hiding, his dental office closed).

In a press release, Palmer claimed innocence: “I had no idea that the lion I took was a known, local favorite, was collared and part of a study until the end of the hunt. I relied on the expertise of my local professional guides to ensure a legal hunt. I have not been contacted by authorities in Zimbabwe or in the U.S. about this situation, but will assist them in any inquiries they may have. Again, I deeply regret that my pursuit of an activity I love and practice responsibly and legally resulted in the taking of this lion.”

In 2008, he pleaded guilty in a federal court to misleading a federal agent investigating the killing of a black bear in Wisconsin, 40 miles outside of where his permit would have allowed the legal killing of the animal. He got one year’s probation and a fine of nearly $3,000, according to the Star Tribune. He has also paid a fine for fishing without a license: a misdemeanor that, like the rest of his unfortunate history, would remain unknown to most people, but for Cecil’s radio collar.

The Pursuit of “Trophies”

Palmer has numerous photos of himself posing with hunted animals: an elk, a mule deer, a cape buffalo, a rhino, and a warthog, among others.

A warthog? Well, the animal had big tusks — which are, I guess, to guys fixated on large horns, antlers, or thick and beautiful manes (as Cecil had), important additions to the trophy room. Big tusks are, too. (No surprise; he has shot an elephant.)

Palmer has been credited with 43 kills, including moose, mountain lion, and polar bear, by Safari Club International (SCI), which boasts 55,000 members worldwide. SCI loves to keep lists of measurements of their members’ various victims. Palmer’s “kills” are all with bow and arrow, and we’ll never know how many “kills” were as cruelly bungled as Cecil’s death. Palmer bragged that he could put an arrow through a playing card 100 yards away.

SCI appeals to the rich and uncompassionate. Society would generally frown upon SCI’s love of killing beautiful animals (“love” being Palmer’s word)—and so the group claims to be conservationist, thus serving a cause more noble than mere bloodlust. The large amounts of money these people are willing to spend for the ‘privilege’ of ending the lives of the most magnificent of animals is, they claim, used to conserve animals… as if that justifies the killing.

Cecil’s death belies all that. Lions are in decline in Africa, and by removing a viable male, the likelihood is that Cecil’s cubs will be killed by the next lion in the community’s pecking order — thus reducing still further the number of individuals and genetic variation of a species in freefall decline. Furthermore, whatever — if any — of Palmer’s money may fund conservation, Cecil was far more valuable alive, drawing tourists to Hwange National Park from around the world.

Precisely because trophy hunting is inherently unethical to so many people, and tends to focus on removing the healthiest individuals, it has to be constrained. The favored way of doing so is by charging high license fees. This seems to make it all the more attractive to military leaders, executives, and highly paid professionals, who seem to delight in wealth-fueled power over others. They are the “might makes right” crowd who is used to getting its own way.

There is no aspect of the trophy hunt that can be accomplished without slaughtering magnificent and often rare animals (or “taking,” to use their word for it).

The killing aspect is important to trophy hunters. Consider, for example, the game farms of Texas and elsewhere. Hunters go into huge, fenced compounds and shoot a “trophy” of a species that is native to Africa or Asia, without the cost of going to Africa or Asia, or the inconvenience of hunting for an animal who can get away. It’s as “sporting” as killing a lion who’s unafraid of people and dazzled by a spotlight — easier, in fact, because the fence is always there — and they don’t have to spend 40 hours searching for the wounded, as Palmer did with Cecil.

By all accounts to date, the extent of Palmer’s “remorse” is not that he shot a lion — but that he shot that particular lion, and got found out. Killing does not seem to bother him at all. On the contrary, he is shown all over the Internet, grinning over the bodies of his victims. He is actually proud, it seems, of what he does.

I believe that these trophy hunters are the rewarded, the privileged, the elite: secure in a relatively rarified air of insulation from what is felt by the majority of people, whose ethical compass they will never understand. They are the entitled, given power by money or position. Usually, they remain well hidden within our midst. Yes, Palmer got caught. But, he’s one of many: at least 55,000, I’d estimate. And, there are still more who yearn to join their ranks and kill innocent, beautiful, valuable creatures.