What is a Whale Stranding and Why Does it Happen? 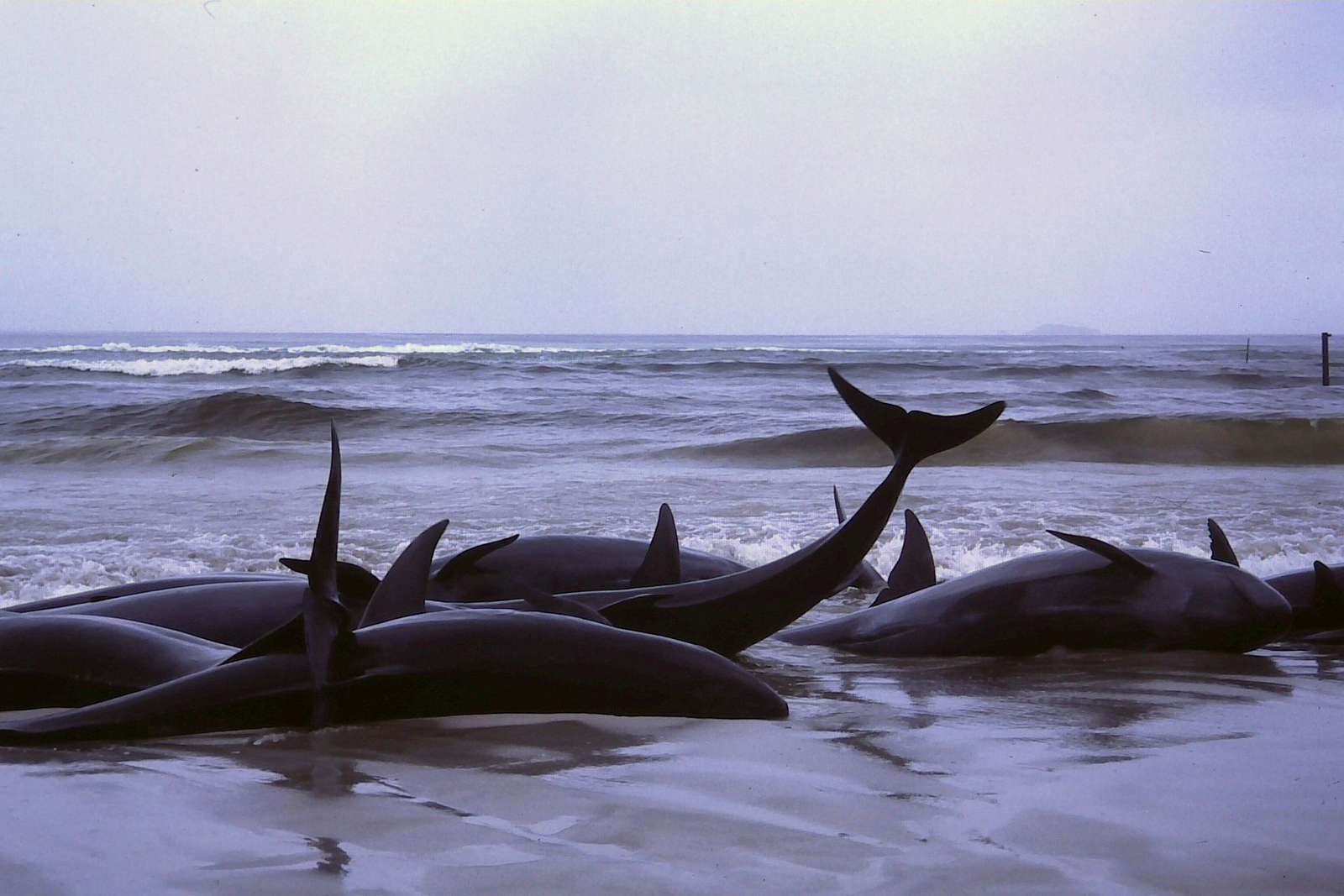 According to the U.S. Marine Mammal Protection Act, a stranded marine mammal is not only a living marine mammal on land that needs medical assistance or is unable to return to the water without assistance, but also includes any dead marine mammal (at sea or on land).

And while it’s fairly easy to determine if a whale or dolphin is stranded, it’s rarely easy to understand why. As there is no single cause for strandings any more than there is a single cause that triggers you to sneeze. Sneezing could be a result of a cold, allergies, looking at the sun or even plucking your eyebrows. The outcome is the same; the cause, however, varies.

Responding to strandings can sometimes help researchers understand the causes, and provide conservation organizations with data needed to develop better protections for not only whales and dolphins, but humans too.

Looking for a Cause

In cases where a whale or dolphin does not survive a stranding, scientists conduct necropsies (autopsies) to determine the cause of death. Last year, more than 1,000 bottlenose dolphins stranded throughout the mid-Atlantic and southeast U.S. as a result of what appeared to be a viral epidemic. However, sometimes human activities are responsible. Studies on strandings of beaked whales in Bermuda provided some of the first evidence of the impacts of military sonar on marine animals.

Understanding the cause of strandings can, literally, help save whales and dolphins in the wild. A study of stranded critically endangered North Atlantic right whales found that nearly 80 percent of these whales died as a result of human causes. This data was used by Whale and Dolphin Conservation (WDC) and other conservation organizations to help develop regulations to reduce ship strikes and fishing gear entanglements in right whale habitat. Since implementation of ship speed regulations, the total ship strike mortality risk levels to North Atlantic right whales have been reduced by 80–90 percent.

Similarly, a review of standings of harbor porpoise and dolphins in the UK highlighted the impacts of bycatch in fishing gear. Data from studies like this one were used to develop the bycatch reduction regulations now in place.

By understanding the cause of strandings, conservation organizations can act and help to prevent further damage to whales and dolphins; however, in the case of mass strandings solutions are not always so readily available.

Cases of mass strandings of live animals are often most perplexing and difficult to understand. Mass strandings typically include a group of the same species of toothed whales coming to shore alive. Toothed whales, including dolphins, typically travel in groups or pods.

There are a number of “hot spots” internationally where mass strandings are more likely to occur including Cape Cod, the Florida Keys, New Zealand, Australia, and Scotland. There are many theories for why these areas are more risk-prone. Some researchers believe it is due to the physical contours of the land; others believe that a large tidal range (the vertical difference between high-tide and low tide) can provide a false sense of security near shore for deep water animals until the tide recedes and leave the dolphins high and dry.

Often times these animals can be returned to the sea providing they have not been compromised as a result of being out of the water. One concern is that they may succumb to the pressure of their own weight. In the ocean, gravity is not an issue for these massive toothed whales whose weights range from several hundred pounds (for dolphins), to nearly a ton (for pilot whales). Other negative consequences of strandings are prolonged exposure to the elements and the inability to avoid land predators.

Fortunately, when trained professionals respond to mass strandings, it is not uncommon to have more than 75 percent of the animals involved saved.

What You Can Do to Help Stranded Cetaceans

Alive or dead, seeing a stranded whale or dolphin typically evokes feelings of concern, curiosity, awe and a desire to help. For the public, helping means keeping a safe distance from the stranded animal and reporting the stranding to the proper regional stranding networks.

While these strandings may not seem to be deliberately caused by humans, in some areas of the world routine “drives” of whales and dolphins puts large numbers of cetaceans at great risk. Many in the U.S. work diligently to save the lives of these stranded whales and dolphins, on the other side of the ocean dolphins are driven into coves to be slaughtered or ripped from their families to live out their days confined in pools at aquaria. These drive hunts, made infamous by “The Cove,” result in the senseless slaughter of thousands of dolphins each year.

September 1st marks the beginning of the season for the Taiji drive hunts in Japan’s infamous Cove. WDC’s research has revealed the cruelty of the killing methods used in the drive hunts. It’s time to put an end to this inhumane practice, and we need your help.