Call for Conservation: What I Learned From Visiting Borneo’s Orangutans 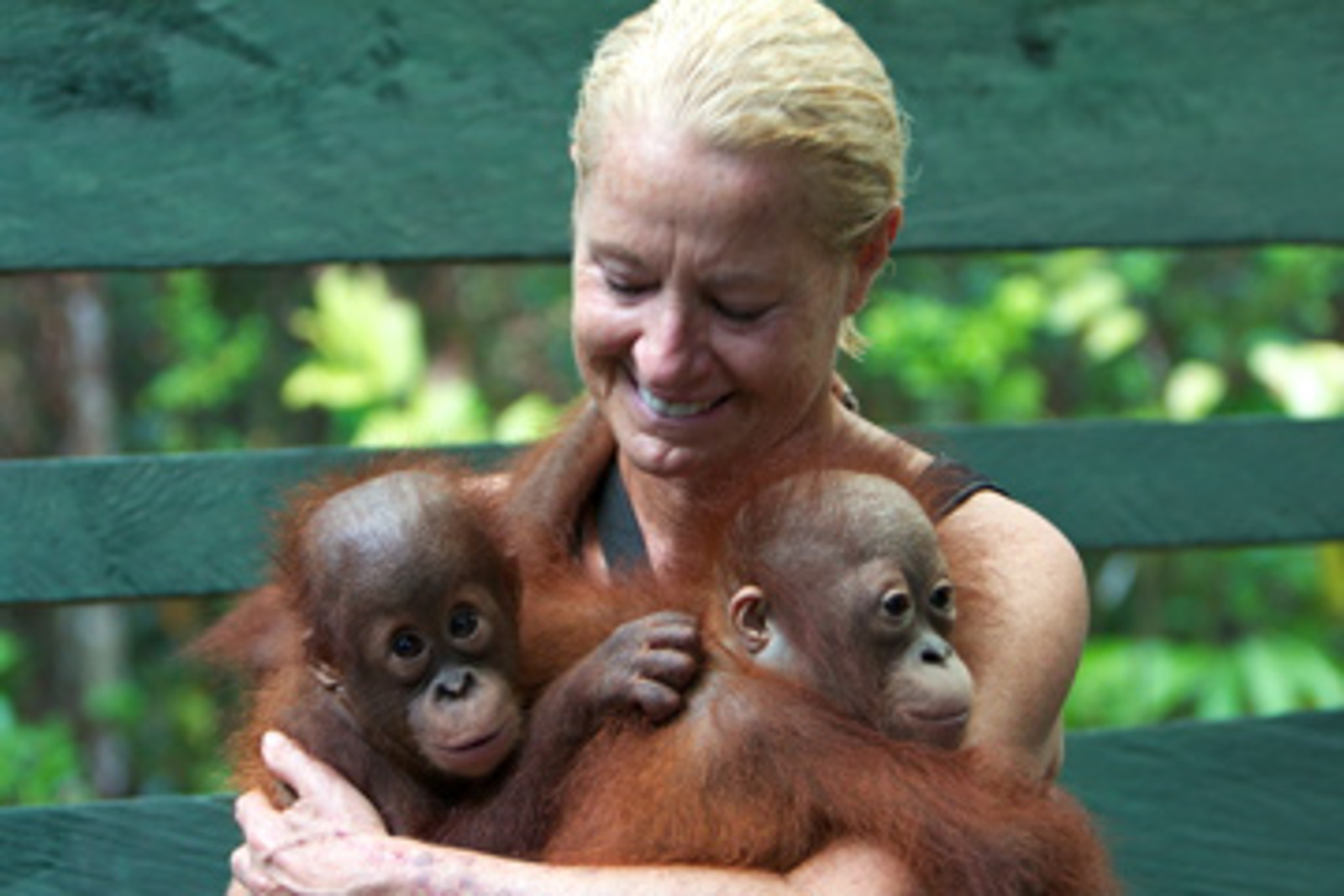 In March of 2011, I had the opportunity to visit the Indonesian island of Borneo with the famous Dr. Birute Galdikas. She has been living, studying, and rescuing orangutans for over 40 years. Dr. G, as she is called, has conducted the longest continuous study of any wild mammal in the world. While she started out as a researcher hoping to learn more about the elusive and mysterious orangutans and their way of life, it was not long before she realized rescuing them would also be necessary. She founded Orangutan Foundation International (OFI) for the purpose of educating, rescuing, and saving the endangered orangutans.

After traveling over 24 long hours, I arrived in Jakarta, on the island of Java in Indonesia. I spent three days in the noisy, crowded city of Jakarta because Dr. G. had an important meeting with government officials to try to persuade them to save the rapidly disappearing forests of Borneo.  She currently has over 300 orphaned orangutans she would like to release back into the wild, but in order to do that, she must convince government officials to protect the remaining rainforests in Borneo.

Even though orangutans have been on earth for more than two million years, and humans less than 100,000 years, it was not until the last century that these arboreal primates have become endangered and in dire need of an advocate like Dr. Galdikas. Whereas orangutans once ranged throughout Southeast Asia and into China, they are now only found on two islands in the world – Borneo and Sumatra. They are also the sole surviving great apes in Asia, numbering less than 60,000 in the wild. They are the largest tree living primate — spending most of their time traveling in the forest, foraging for food, nesting, and socializing so the loss of the forests is the loss of their homes.

When Dr. G. was finished with her business in Jakarta, we flew to Borneo to visit the OFI Care Center for a rare opportunity to be close to the orphaned orangutans. These gentle, playful primates did not disappoint. We walked with them out to their playgrounds and were thoroughly entertained by their acrobatic abilities, their affectionate ways, and their love of mangoes, their caretakers and of course, Dr.Galdikas.

Getting to Know the Rescued Orphans 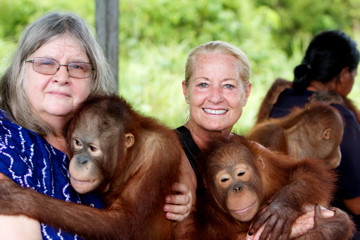 I spent a lot my time with Morgan, one of the playful males around seven years old. He sat in my lap and ate his goodies. We played and high-fived each other and rolled around on the ground together. Orangutans are skilled imitators and imitation is a social behavior. Wild orangutans never imitate human behavior because they usually don’t interact with us. They imitate their mothers. However, orphaned orangutans and ex-captives like Morgan, lacking their mothers, pay attention to and imitate the humans who have become their caregivers. Perhaps in the future we will see wild born orangutans high-fiving, having learned it from Morgan, who learned it from me.

Orangutans, like us, have their own distinct personalities but all of them are totally entertaining. The scene with some 40 juvenile orangutans appears and sounds a lot like our playgrounds filled with lots of children—the frenetic activity and cacophony of sounds filling the air with joy and play. They are curious, mischievous, playful, athletic, voracious, and affectionate and thoroughly entertaining. 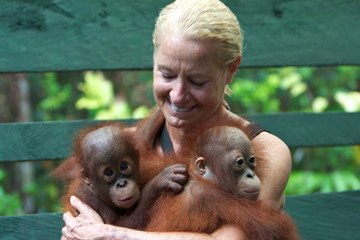 We met the babies, just 1-3 years old, the next day. At this age they are very much like human babies. These orangutans spend their entire first few years clinging to their mothers and without them, they cling to the next best thing – us humans – which strikes me as odd since we humans are the ones responsible for their being orphans. Dr. Galdikas has found that the survival rate for these babies increases dramatically when caretakers hold them and sleep with them – that’s how crucial the tactile bond is for them. Just like human babies, they are also very oral, using their tongues to inquire about things like the camera I was holding. As much joy as I got from holding and caring for these orangutans, it was always very bittersweet because I could and would never forget that they belong in the wild, with their mothers, their trees and their way of life, which is rapidly disappearing.

The Devasting Reach of Palm Oil

Next we were taken on a very excruciating four-hour drive to get to Rimba Raya and OFI’s base to release four male orangutans back into the wild. It was on this drive that we first glimpsed the vast palm oil plantations that are causing the deforestation. Palm oil is actually an unhealthy, saturated oil used in many foods and beauty products.

Worse, it is also a cheap fuel and it employs many people so it is a difficult thing to persuade the Indonesian government to stop. Indonesian palm oil is responsible for many animals coming close to extinction, child labor, the displacement and imprisonment of indigenous people and the rise of fires and floods. Palm oil is already responsible for over 10 percent of greenhouse emissions. When these forests and peat swamp forests, which are carbon sinks, are destroyed, that stored carbon is released into the atmosphere. The same is starting to happen in many African countries with the same repercussions.

Upon our arrival, we were immediately greeted by three previously released orangutans, anxious to see Dr. G and get those delicious mangoes. One was Kristin, who, by the end of the day, had totally blown me away with what she could do as far as imitation but also the emotional attachment she showed to Dr. G, who had cared for her as an orphan and released her several years ago. One of my very favorite memories is this scene of Dr.G. with Kristen shortly after we had arrived.

Returning to the Forest 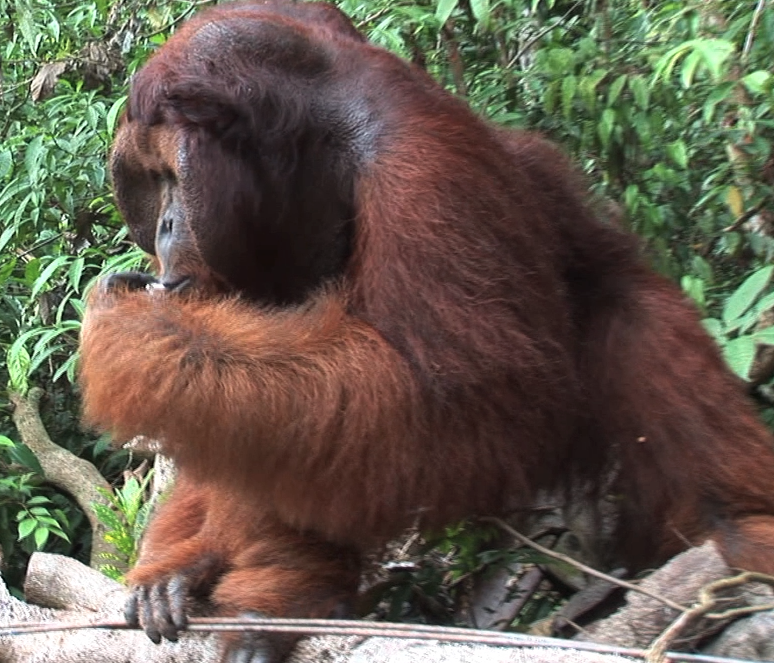 The love and affection that these animals show to Dr. G. and the OFI staff and to strangers is truly something incredible to see and feel; their innocence so touching, even inspiring but also heartbreaking when you think of what is happening to them. Walking into this amazingly beautiful, dense and quiet forest to release four lucky males was again a bittersweet treat. Happy to let them go back into the wild, you can’t help but worry for these “persons of the forests” and all the dangers that could come their way. I was comforted by the fact that OFI has rangers who patrol this part of the forest to protect them and aid them, if needed. As we went further into the forests, we were greeted by several mothers with babies clinging to them as they made their way down the trees to the food and their friend. The sight reminded me of an acrobatic Cirque du Soleil but the atmosphere was one of peacefulness, maternity, and reunion. I was personally thrilled to see Pushka, a young female orang who was named after me a few years ago, who had since been released. She is seen being released in the wonderful movie Born To Be Wild. 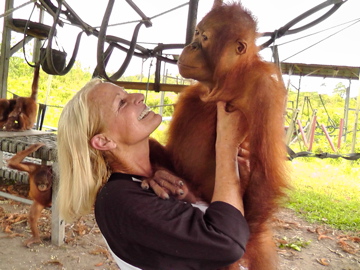 Camp Leakey was our last stop and because this is where Dr. G. started her important work over 40 years ago, it was an important one. After a 2-hour motorboat on the river—much of it polluted due to strip mining—we arrived at the national park with its lush green trees foliage. It was hard to visualize how Dr. G had dealt with this jungle so many years ago. We walked into the forest to the feeding station where several visitors were silently watching as the orangs come to eat. When they saw Dr. G., the scene completely changed. 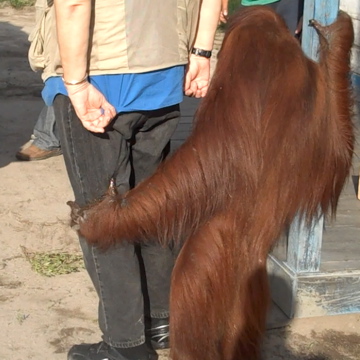 Certain orangutans had to see and be with her so they came down from the platform and out to the audience where they proceeded to touch and sit with her. I think they also wanted to show off their beautiful babies and one of those babies displayed his curiosity by daring to touch Dr. G! Another thing that really moved me was the fact that upon leaving the two different forests, there was one mother orangutan with her baby who insisted upon walking hand in hand with Dr. G. out of the forest, even though walking for them is extremely difficult and exhausting. Of course, someone had to hold the mother’s other hand and that too was such a delight for me. Can you imagine the feeling when a wild orangutan turns to you to hold your hand? It’s really indescribable. 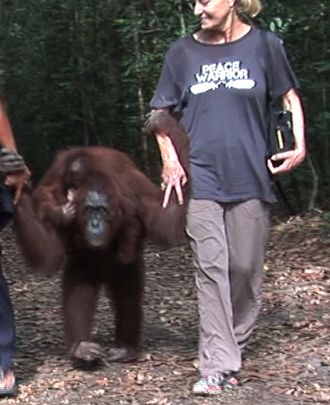 The emotional depths of these “persons of the forest” are huge. They are smart, playful, affectionate and they share 97 percent of our DNA; they are our cousins. I feel extremely lucky that I was able to take this trip, and especially grateful to travel with Dr. Galdikas. I struggle to find words here to really convince people just how special and important their survival is. I fight for all species because I believe the earth needs all species and we are all inter-connected. But the connection between the orangutans and us is undeniably strong and the thought of losing these precious, gentle beings is unacceptable to me.

As wonderful and delightful as you may feel as you watch and learn about them, it is imperative that we remember that this is an enormous tragedy that is happening. If we let them go extinct, and the many other species who will disappear with them, the world will become a much sadder, less interesting place and we humans will be to blame.

As Dr.G writes in her book: “When Jane Goodall, Dian Fossey and I went into the field, none of us anticipated that we would be pushed to the forefront of the environmental movement; that we would be caught up in global political, economical, and even spiritual crises. In those early days of innocence, we were motivated simply by curiosity and the desire to better understand our non-human kin. People thought we were crazy to go into the forests alone and unarmed. What we did was dangerous, but not because of the apes we were studying threatened to harm us. Danger wears a human face.”

But compassion also wears a human face – and I have to believe that with education, with awareness, and with caring people like Dr. Galdikas protecting, saving and defending the orangutans, we will save these amazing creatures. We can and we must!