What Cecil the Lion’s Death Teaches Us About Empathy

The tragic death of one of Zimbabwe’s most loved lions — Cecil — has sparked global outrage. And understandably so. It’s hard to fathom why anyone would want to shoot and kill such an incredible animal. The American dentist who hunted and shot Cecil with a bow and arrow, reportedly paid $55,000 for a permit to kill a lion. Reports say that Cecil was lured from the protection of the Hwange National Park and then killed. It’s illegal to hunt within the National Park.

Cecil’s death is undeniably devastating. But it begs the question — would this story even be told if it had been any other lion who was shot? Approximately 600 lions are killed every year on trophy hunts. In a statement, the hunter who killed Cecil said:

I deeply regret that my pursuit of an activity I love and practice responsibly and legally resulted in the taking of this lion Walter James Palmer, trophy hunter

Had he shot any other lion (or any other animal) we might never have heard about it. But Cecil had a name. He had a personality. He was loved. 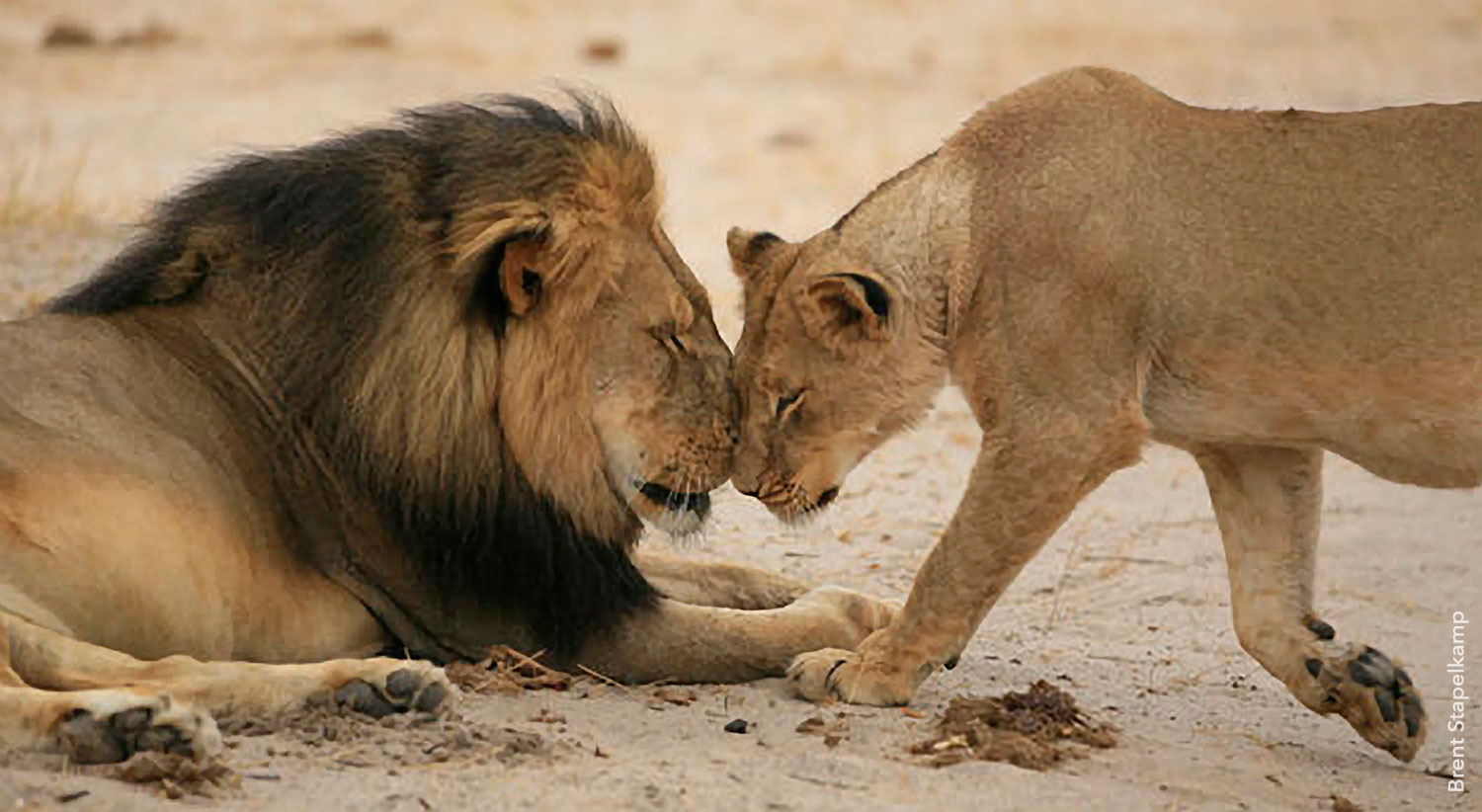 Does having a name make Cecil’s life more valuable? All lions have unique personalities. They have loved ones. They may have cubs, like Cecil did. But their deaths would not make global headlines.

Rightly or wrongly, it is an undeniable trait of human nature that we care more about those we know than about those we barely know. With Cecil, we see on a global scale that even by simply knowing an animal by name, we feel more connected to him. We understand that he is a someone.

But what if we could expand our compassion to the animals who we don’t know?

What if — as that trophy hunter squared ‘another unfamiliar lion’ in his sights — he recognised that when it comes to how lions value their own lives — every lion is Cecil?

Our tendency to favour the interests of those we are most familiar with over those we don’t know might feel ‘normal’. But when it comes to deciding what is fair and just, familiarity can be like waving a magnet in front of our moral compass.

If you agree with that then you’ll agree that this is a clear ethical argument for ending trophy hunting of all animals. But it’s also more than that.

The truth is, closing our eyes won’t ease another’s pain — it only shields us from sharing it — and prevents us from stopping it.

The world was understandably outraged that Cecil’s life was cut short. Most would agree that his life was more valuable to him than that single moment of pleasure was for the hunter. How can the two be compared?

There is predictably similar outrage at the thought of eating dogs in some parts of the world. Surely a moment’s culinary pleasure can’t possibly justify slitting the throat of a someone like Lassie. Perhaps, if only they knew dogs like we do, they would recoil at the idea, too…

Where does that leave the animals we don’t know — who remain unnamed and unfamiliar to us? If we got to know them, might we recoil at the way they are treated, too?

If you’ve ever had the fortune to get to know a pig you’ll realize that they can be every bit as smart and social as dogs.

In parts of India where cows are sacred, people cannot fathom how we in Australia could turn these gentle-natured and curious animals into burger patties.

Then there are pigs — most often encountered in the supermarket deli — who can also make remarkable pets. People who’ve had the fortune to adopt pigs come to see these intelligent, social animals as friends, even family — and recoil at factory farming, or eating them. After all, they wag their tails when happy, will respond to their own name and can be very affectionate. 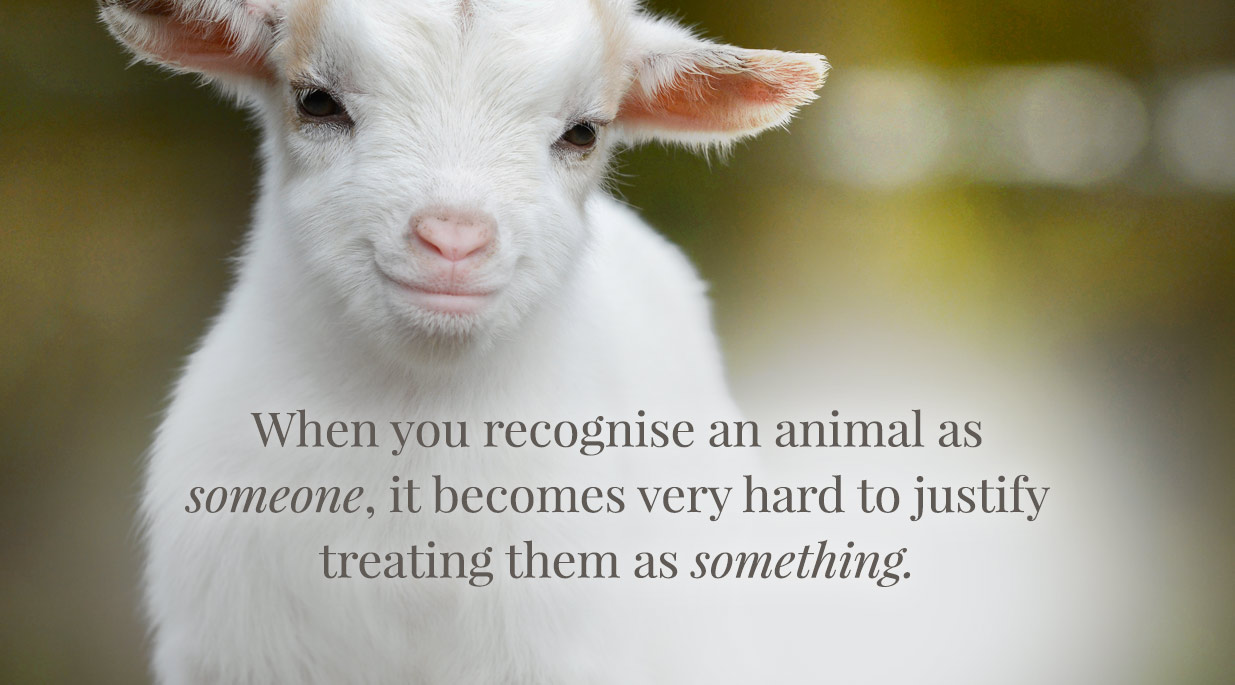 Animal industries know that we’d lose our lunch if we were told that the sausage on our plate was once an individual named ‘Margaret’, who was withdrawn and a bit shy, but dearly loved her babies. Animals in factory farms don’t have names. They are numbers. But they are no less unique individuals.

This lion mattered. Cecil’s death mattered. Not because we knew his name, but because every individual’s life and dignity matters.

So is a world where we extend our compassion to those we don’t know — human and animal — possible? Yes! Compassion is like a muscle — when we exercise it, it gets stronger. And strength in numbers can transform entire traditions, and industries, and most importantly, lives.

Every day we make choices about how we treat individuals who we will never meet — from what we wear, to what we buy, and most especially what we eat. To create a kinder world, we need only harness the power of our everyday choices to transform the lives of animals for the better. And we can start today. Take the first step here.