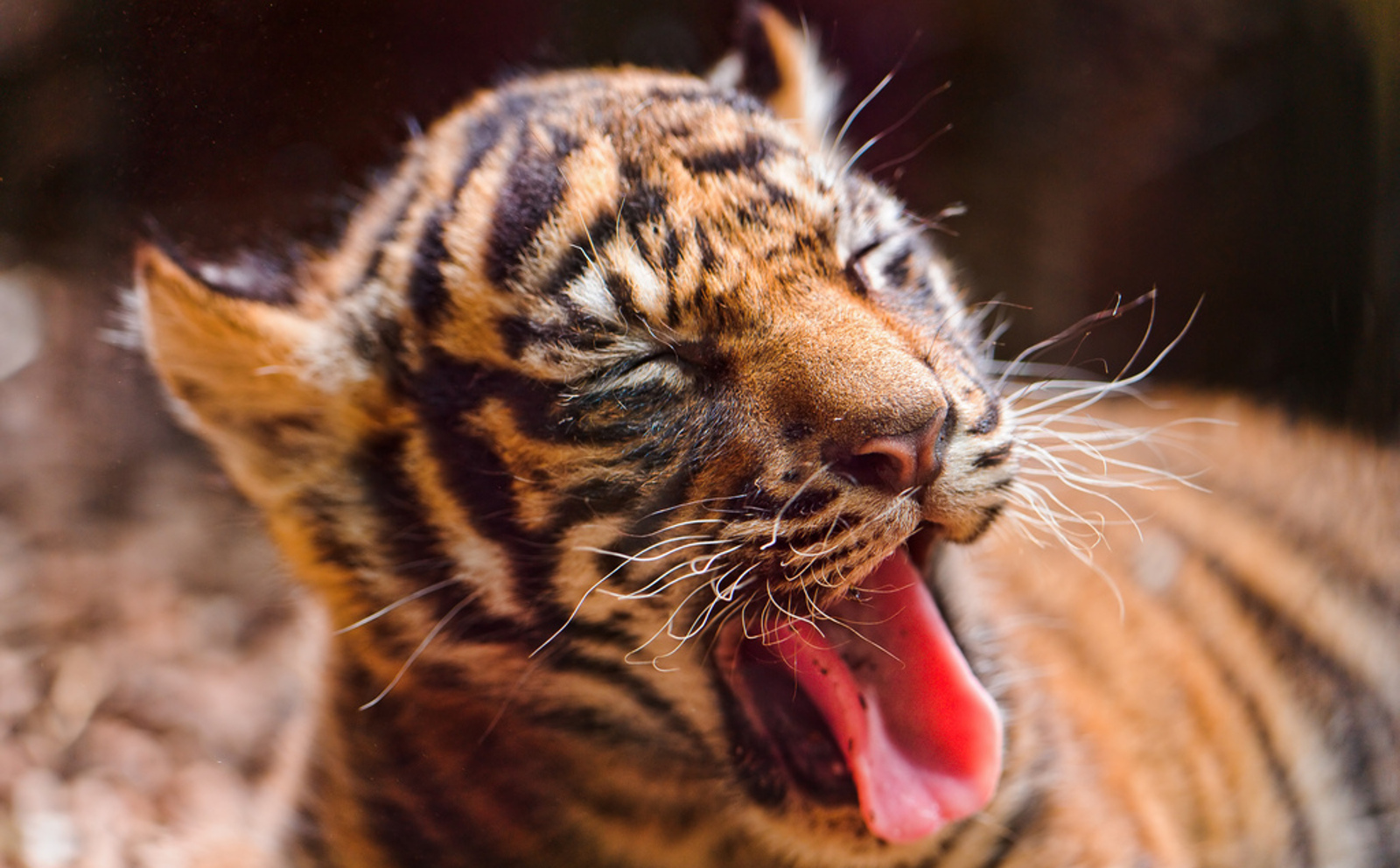 Exotic animals hold our interest for so many reasons – they are cute, they look cuddly, they are strange and fascinating, they are strong and powerful, they are rare and elusive. We laugh at videos of chameleons playing with water, or coo over a slow loris being tickled.

But there is an astonishing and deeply disturbing business behind many of these images and videos that goes on every day: the exotic animal trade. This trade funnels animals into roadside zoos, animal attractions and even homes to live as pets. While this may not be the case across the board, as many reputable animal sanctuaries and conservation organizations also post videos of their animals, many of the “cute” videos that we see on the internet actually depict animal cruelty and exploitation.

Take for example, a video featuring an elephant painting. On the surface, it might seem like an amazing feat of the elephant’s intelligence … but in reality, these animals are part of a tourist attraction and have been tortured and abused in order to perform this activity. Suddenly, this sweet video becomes sour.

As animal lovers, it is up to us to look beyond the “cute” and question how these exotic animals are really being treated. 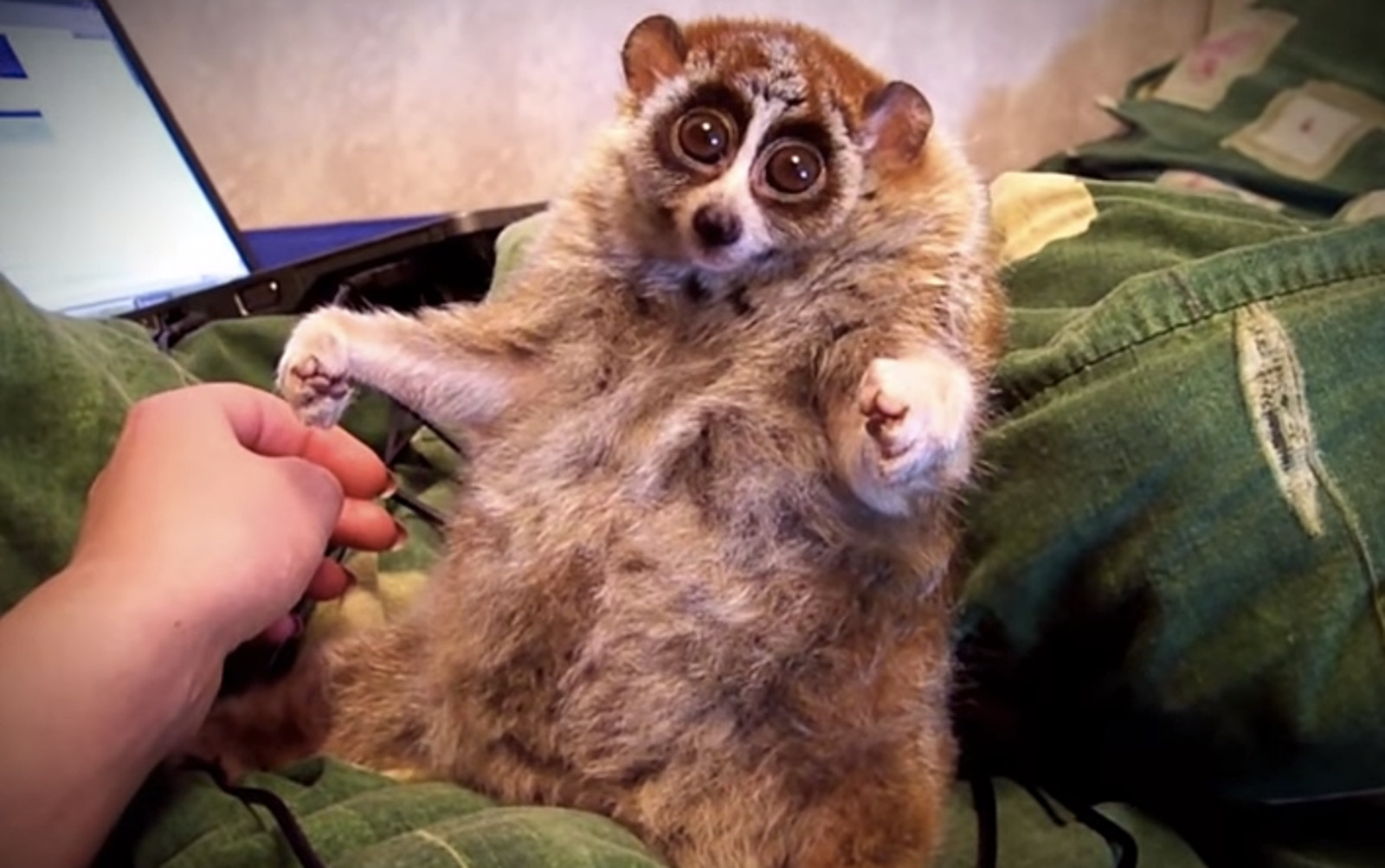 Slow lorises are beautiful creatures who are often featured in videos that go viral and photos (like when Rhianna took a selfie with that prompted a police investigation). Without an understanding of these animal’s behavior and their needs, it is easy to assume that the big-eyed cuties we see in videos are happy. They look well fed, well loved. One of the more popular videos shows one being tickled and throwing its arms up as if in glee. But what if we told you the truth?

After these videos were shared over and over again, “pet slow loris for sale” began to appear in with thousands of Google searches.

The slow loris is endangered, and the pet trade is threatening their survival. These slow and gentle animals are captured by poachers, who typically take entire families.

Poachers typically remove the lorises’ teeth and claws to prevent them from biting. These particular animals have venom glands in their teeth and wrists, which can be highly poisonous. Once lorises are “prepared” for sale, they are smuggled in poorly-ventilated containers, all across the world, where they will be purchased in pet stores or online and fed a diet of starchy white rice instead of the rich variety of insects, meat, eggs, fruit, and vegetation that they would naturally eat. Here they will languish, until they die from stress or obesity-related illnesses, nutrient deficiencies, metabolic bone disease, and tumors.

2. The Deception Behind the Tiger Who Adopted Piglets in Stripes 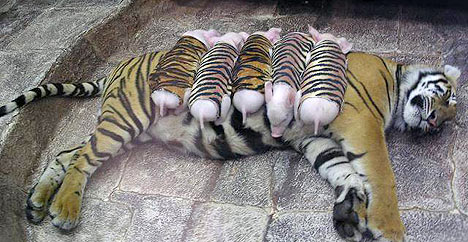 This viral story has made millions of us go “awwww!”

According to the tale: “A mother tiger lost her cubs and became depressed. She wouldn’t eat and drink and zoo staff didn’t know what to do to help, until they tricked her into adopting a group of piglets dressed up in stripes.”

If this sounds far-fetched to you, and it should. And yet so many people have reblogged, shared and otherwise believed the pictures, with no thought at all for the absurdity of the tale. For this photo is nothing but a sick ploy to lure tourists and garner attention – from a zoo with a horrible reputation – the Sriracha Tiger Zoo in Thailand.

This zoo frequently separates babies from mothers and swaps them with a different species, resulting in stress and psychological problems. The zoo’s website promises: “Hold the tiger cub in your arms, feeding milk and take a memorable picture. See how the sow can play a role of the tiger cubs’ nanny.” If that wasn’t enough, the zoo also has a daily tiger show, with cats forced to jump through rings of fire, and elephants are made to carry people around the park and do tricks for them. The cubs are also passed around for photos with the guests, which leads onto the next topic…

3. Not so Cute Cub Selfies 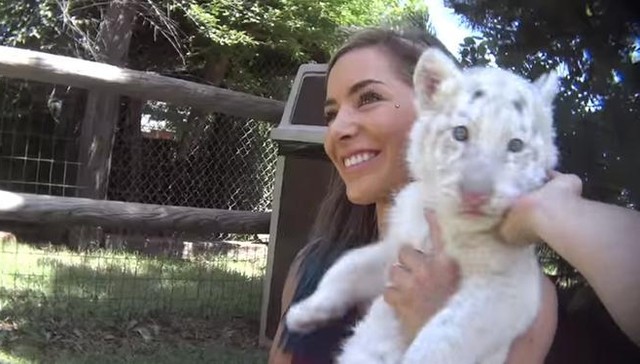 The internet is full of “lucky” people visiting shopping malls, petting zoos, or football stadiums and getting to snuggle up with a tiger cub. Naïve but usually good-hearted animal lovers are told that the cubs are well cared for, happy, love the attention, and that these harmless photo shoots are a great way to save the species, and promote conservation efforts by encouraging your friends to do the same. But these are more lies – the truth is far more disturbing.

Female tigers are kept in a constant state of pregnancy and are bred shortly after giving birth to keep up with the demand for cute little cubs still small and cuddly enough to handle – they grow very quickly, and within a few months are unable to be safely passed around and prodded.

These cub petting schemes are also often operated around the country, meaning these delicate young babies are always in transit, and still separated from their mothers to break the bond and make them used to seeking humans for their comfort. They are denied every instinct to play, explore, and learn, as they are forced to stay in cages for the majority of their time being used and then passed around like toys. Handlers will often blow into the faces of irritable or fidgety cubs to “calm” them – which in fact is a punishment technique. Underage cubs are routinely used as they are sleepier and smaller, thus easier to handle. Cubs that are much older and more capable of injuring people are also sometimes used, putting the public at risk.

No money earned through these schemes is used to help conserve wild tigers. In fact, the existence of cub petting zoos often helps to fill the demand for rare tiger skins and artifacts. The breeding of these tigers is not tracked by the U.S. Fish and Wildlife Service, meaning that any number of animals who are deemed no longer useful to the trade can be killed and used for these purposes. Even if they are not killed, the existence of any remaining tigers that are retired from the business is very bleak indeed. Current laws in America allow tigers to be housed in concrete and steel prison cells, with chain link fences and not a blade of grass in sight. They languish here until they day they die, as somebody’s fancy pet, a far cry from the wild lands they would roam naturally.