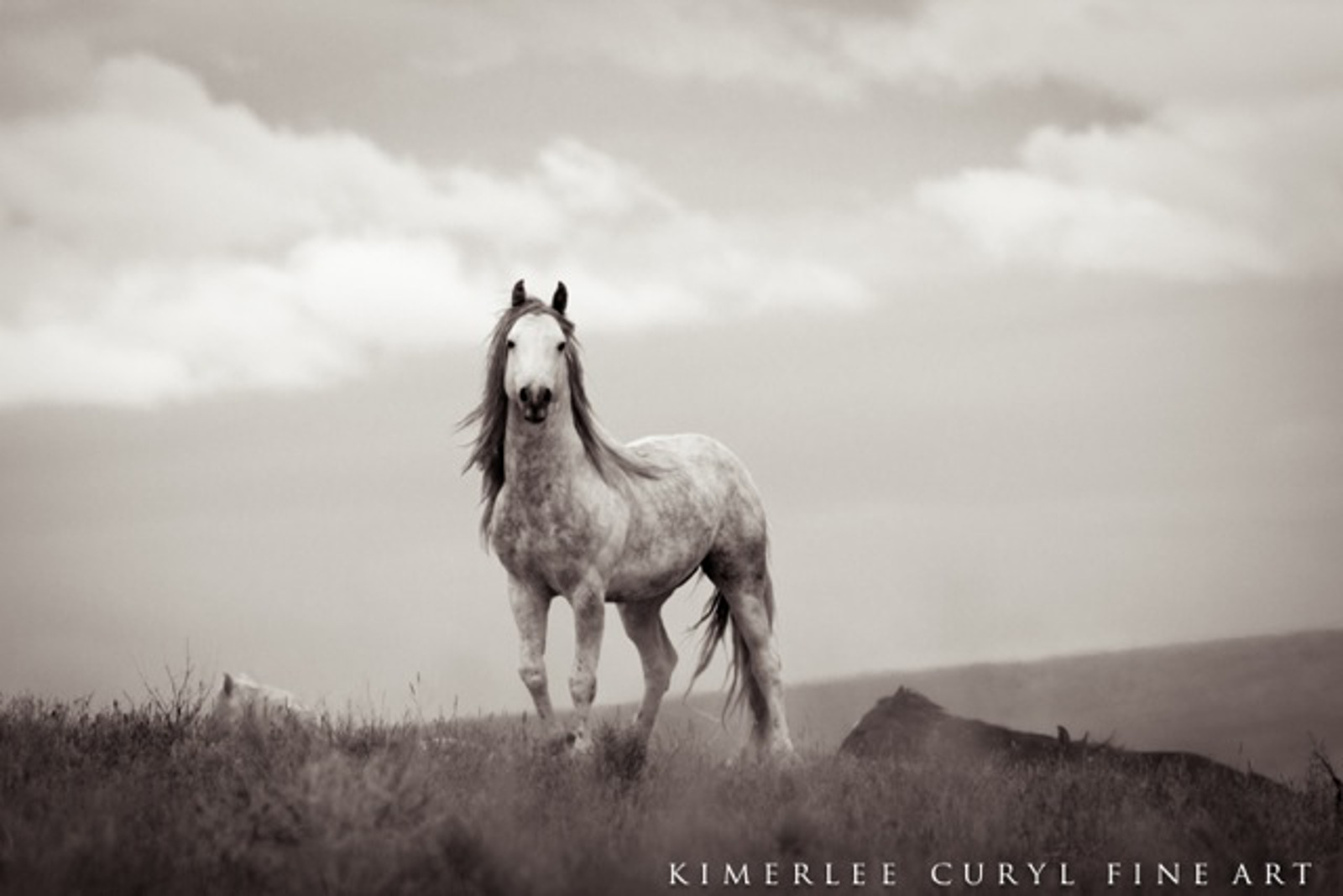 Conflict between the wild horse population and cattle ranchers runs rife across the western United States. Despite the fact that wild horses have roamed these plains for hundreds of years, the prospect of profit from expanding ranching operations have come at a high cost to wild horse territory. According to American Wild Horse Preservation, private livestock outnumber wild horses fifty to one in the west, and these statistics only stand to grow out of favor of horses in coming years.

The U.S. Bureau of Land Management (BLM) has been charged with the management of wild-roaming horses and burros on federal lands, however, currently around eight times more of federal lands are being rented out for cattle operations than land designated to sustain wild horses. Adding insult to injury, the BLM also carries out routine roundups of wild horses to “control” their populations and reduce competition for ranching land. While this injustice is occurring all over the U.S., current plans to sterilize the last remaining population of Saylor Creek’s wild horses is particularly unsettling.

The Mustangs of Saylor Creek 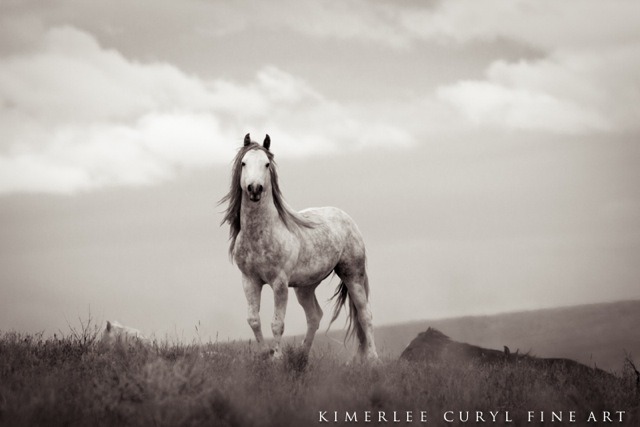 Renowned wild horse photographer and advocate, Kimerlee Curyl visited the Saylor Creek Herd Management Area (HMA), located on BLM in Idaho June 2010.  She happened upon a very skittish group of wild mustangs in a large valley just beneath a much-used parking area. She observed many shod horse prints and the tracks of trucks and trailers, along with empty gun shells and beer cans. She was sad to realize the likely possibility that the wild horses of Saylor Creek were regularly harassed by people who knew of their existence.

“The HMA also had the largest cattle population I have seen amongst all my travels to wild horse areas throughout the West. The horses’ source of water was filled with hundreds of cattle – moms, babies and even a few bulls,” Curyl recalls. “The ground was hard as concrete from the constant grazing, lounging and little movement from the cattle. I watched as horses made their usual migratory trek to and away from the water, while the cattle were really just content to stay put.”

“Upon entering this area, there was a sign, frequently seen in many wild horse areas, warning people to stay away and not harass the horses. Under this sign was a little baby cow resting, while his mother stood alongside the sign,” she continues, “The irony of this situation was not lost on me.” 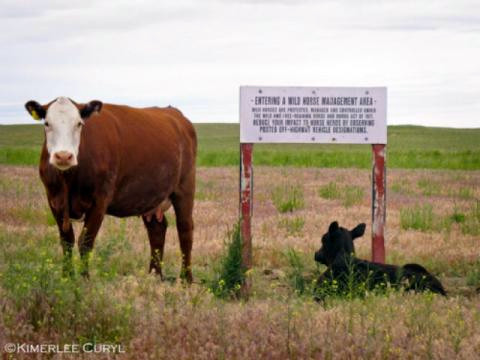 After enduring decades of disruption from hunting and other activities, and competition for habitat from swarms of privately owned cattle, the Saylor Creek wild horses now face harassment of a different order entirely. It comes in the form of the BLM’s final Resource Management Plan (RMP) for the Jarbridge District, released this week. The RMP will establish the Saylor Creek HMA as home to a “non-reproducing” wild horse herd, meaning that all the mustangs living there will be sterilized, likely through surgical means.

The plan spells disaster for the federally protected wild horses living in the Saylor Creek HMA, according to the American Wild Horse Preservation Campaign (AWHPC).

What’s worse, she says, is the BLM’s attempt to spin the plan as an action to create a “sanctuary” for wild horses in the Saylor Creek HMA.

“The notion that this cattle-ridden public land area will be turned into a mustang sanctuary by sterilizing all the wild horses who live there is as absurd as it is deceptive,” Roy continues, calling the BLM’s spin “a fraud on the American public.”

The Plan for Mustangs 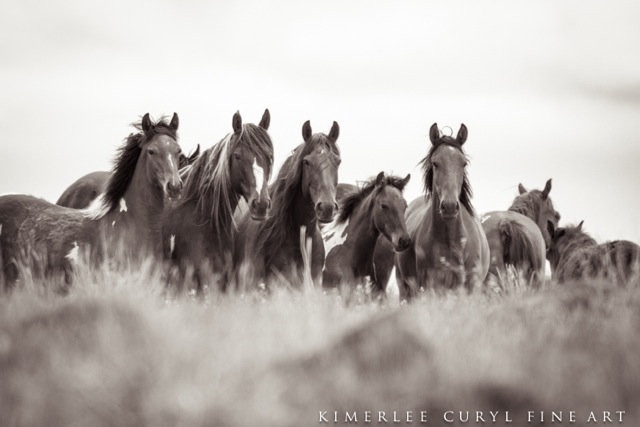 Last year, AWHPC and its coalition partner, The Cloud Foundation, formally protested the BLM’s Jarbridge Resource Management Plan (RMP) that designates the Saylor Creek HMA to be managed for a non-reproducing mustang herd. The groups charge that the plan violates the Wild Free Roaming Horses and Burros Act and would turn a federally designated habitat area for wild free-roaming horses into a holding facility for mustangs that have been captured from other areas and sterilized.

The agency already warehouses nearly 50,000 wild horses in such holding facilities located throughout the West and Midwest. That’s as many as remain free in the wild.

Under the Jarbridge RMP, the agency will allow a maximum of 200 sterilized mustangs to live in the HMA, while continue to authorize ten times as many cattle to roam the area.

Curyl, the photographer, was devastated to learn what the BLM has in store for the herd she so beautifully documented in 2010. “The plan to sterilize the Saylor Creek wild horse herd is one more step down the path of total destruction for America’s cherished mustangs,” she said.

What You Can Do to Protect Wild Horses

When pitted against the cattle interests of the region, unfortunately, wild horses and burros are likely to lose every time. This phenomenon is not unique to the Saylor Creek region of Idaho but is happening in wild horse territories all across the U.S.

Unlike cattle, wild horses don’t have the backing of billion dollar industries to justify their place in the American West, but does this mean that these iconic animals deserve to be systematically whipped from their natural habitat? If you don’t agree with the actions of the BLM, speak up for wild horses and sign this petition to Tell BLM Idaho NO to Sterilizing Saylor Creek Herd!

Together, we can give wild horses the fighting chance they deserve.