Under the Surface of Cosmetics: the Cruel World of Vivisection 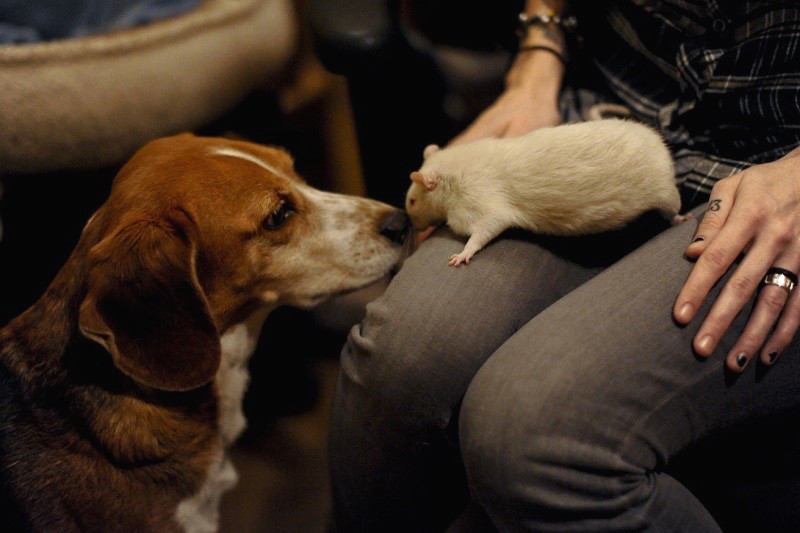 What do we think when looking at this photo? How beautiful the beagle and rat are? Or, perhaps how incredible it is seeing them together? Surely it’s something positive, optimistic, or uplifting. What we definitely don’t think about is the extreme abuse; intense distress; and severe pain both endured while experimented on in laboratories for days, weeks or months.

When discussing issues pertaining to the abuse, exploitation and torture of non-human animals, individuals are aware of “animal testing” in the common sense – often limited to cosmetics – but few are aware of exactly what goes on and how far-reaching the industry is. The most radical piece of legislation to date, on March 11th (2013) the European Union banned the sale of new animal tested cosmetics. A success worth celebrating; nevertheless the archaic and barbaric practice extends far beyond cosmetics and will continue to take place in the EU, while elsewhere there is even less legislation or regulation.

The term “animal testing” describes the experimentation of products and procedures, as well as the investigation of cures or treatments for human diseases and illnesses, on non-human animals. The official term vivisection is a Latin word meaning alive (vivus) and operation (sectio), referring explicitly to experiments conducted on conscious, living beings that have a central nervous system.

Countless experiments are conducted for each product and procedure we can think of, in addition to those we can’t, with the most rigorous ones being used for drugs and food-related items (e.g. engineered ingredients). Other products include cosmetics and skincare; automotive, electronic, and household goods; office supplies (e.g. ink and pens); and even rather peversely “pet” food.

For all of these items each ingredient is tested, as well as the final product. Substances are administered orally; applied to the eyes or skin; inhaled through a mask or in an inhalation chamber; and injected. These procedures are repeated regularly for months or the animal’s entire life in order to test carcinogenicity; damage to organs; eye and skin irritancy; general toxicity; mutagenicity; and reproductive issues.

For a “cure” non-human animals are infected with a disease or have the illness induced, following which the drug or treatment is administered to determine the effects (as listed above); and in testing a medical procedure, animals have both minor and major surgery while conscious, and often without anaesthetic. Experiments even take place on livestock, to find out how animals can produce more offspring or grow fatter faster, as well as to find how (not if) cows can produce more milk or sheep produce more wool.

In some experiments pain and suffering is unavoidable because it is part of the condition or disease, e.g. arthritis or cancer, or because the procedure purposefully causes it, such as electric shocks or full-body restraints; long-term isolation; or withholding sustenance. There are also several procedures where the death of the animal will be the endpoint as part of the experiment design, such as cancer research; infectious disease and toxicity studies; and vaccine trials. Then there are all of the other experiments that take place where distress, pain, and suffering are an unwelcome accompaniment.

A TRICK: COMPANIES MAKE MONEY WHILE WE BECOME SICK

Governments, companies, and even charities want us to believe vivisection is absolutely essential to ensure health and safety, as well as for medical research. The truth is that vivisection is lucrative and for this reason alone it continues. It should come as no surprise that its biggest advocates include those who profit from it, as well as companies that supply laboratories with products and services (cages; food; medical supplies etc.).

The medical and pharmaceutical sectors generate substantial revenue when people become sick, so an unimaginable number of experiments are conducted to make us believe we need their treatments; drugs; and cures in order for us to get better, or even remain well. Moreover, because vivisection is respected within modern medicine, companies; laboratories; and medical centres receive unprecedented amounts of financial support in the form of direct grants (worth millions of dollars) to conduct research.

It is also believed that being able to state something was tested on a non-human animal provides an excuse (i.e. “insurance”) should it prove defective and a consumer wishes to sue. Both genetics and molecular biology show humans and non-human animals differ in profoundly important ways, so no actual assurance can be offered. As a result, there are inherent failings in vivisection, a prime example of which is the drug thalidomide. Tested on non-human animals and believed to be safe for pregnant mothers, it had devastating results for those who used it. Cancer research is another example because, unlike clinical tests, experiments conducted on non-human animals did not link cigarette smoking to lung cancer. This delayed crucial warnings for smoking, while hundreds of thousands of people died.

A LIE: MILLIONS OF ANIMALS DIE

Because the general population cares about animal welfare, we are led to believe non-human animals seldom suffer in experiments. The truth is 100 million animals live in distress, die, or are killed in laboratories each year, none of whom signed a consent form.

We’re told that vivisection is essential, but does NOT mean that the experiments are invaluable, irreplaceable, or even that alternative methods could not have been used. The truth remains that vivisection is unreliable, but even if it wasn’t, it will always be unethical.

Unfortunately we can’t wipe out the vivisection industry overnight; but we can make changes in our own lives to ensure we aren’t complicit in this abhorrent torture. Most importantly, only buy products from companies that are cruelty-free at all stages of production. The following companies are 100% vegan and a good place to start:

In addition, ensure charitable contributions do not go towards non-human animal experiments (Animal Aid and Humane Seal have information on which charities are cruelty-free).