This Hilarious, Fun-Filled Turkey Is Changing Hearts as an Ambassador for His Kind 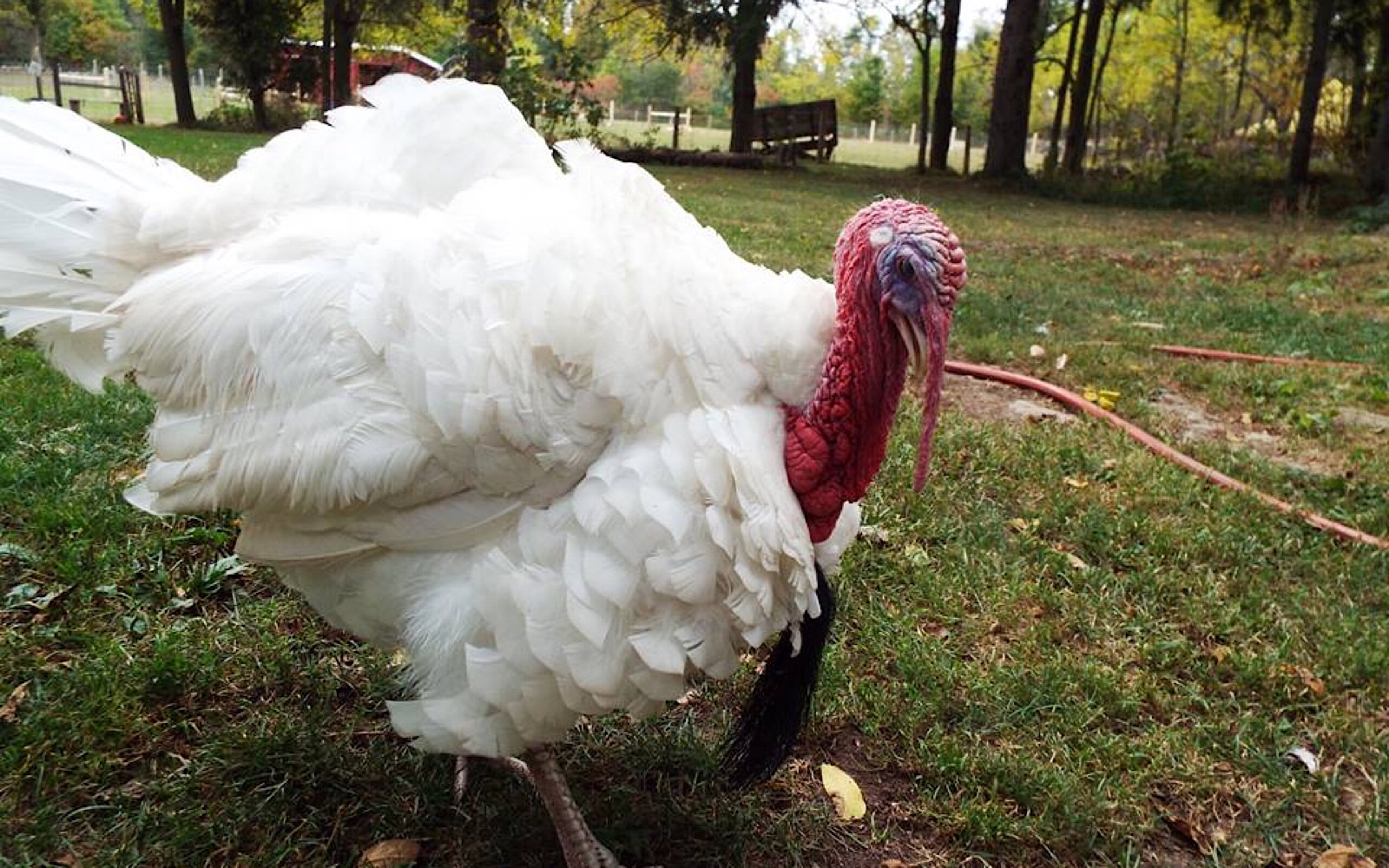 Turkeys are intelligent social animals who love to explore their environment and bond with other creatures (both human and non-human), but this is not a well-known fact. Ask people to list some of their beliefs about turkeys, and stereotypical ideas of them as stupid or unfeeling creatures will soon emerge. These myths allow many to perpetrate horrendous cruelty against these animals, justifying it with the excuse that they cannot feel what is being done to them or do not have the intellectual capacity to even know that it is happening.

One amazing turkey named Cornelius has made it his mission to change that. 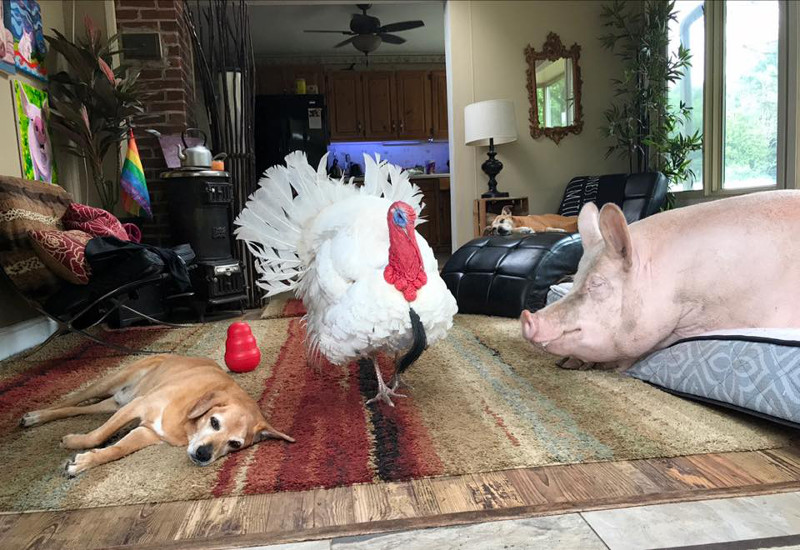 Cornelius is the close friend of another much-loved animal celebrity, Esther the Wonder Pig. Esther originally came into the lives of her dads — Steve Jenkins and Derek Walter — as a supposed “mini pig” back in August 2012, but they soon discovered that she had, in fact, been bred into existence as a commercial pig, and she would ultimately become far heavier than the 70 pounds they had been told she would reach. She currently weighs 650 pounds. As the two men learned more about the heartbreaking life she and other pigs in factory farms had been bred for, they were inspired to go vegan and establish an animal sanctuary called Happily Ever Esther in her honor.

Happily Ever Esther has since become a safe haven for a wide array of pigs, cows, birds, goats, sheep, and other animals. Cornelius arrived at the sanctuary in April 2017, along with his chicken buddy Hank, after a couple who had previously lived with them were unable to care for them any longer. According to their new guardians, Hank is a quiet and reserved character, but Cornelius immediately proved to have a much more outgoing personality, and it wasn’t long before “he decided the spotlight was the life for him.” He began to pay regular visits to the house, where he displayed a great talent for hilarious photobombs, even upstaging the pink princess herself on more than one occasion! He and Esther are now inseparable.

When Esther and her beloved canine friend Shelby decide to go on adventures together, Cornelius is often the leader of the pack. 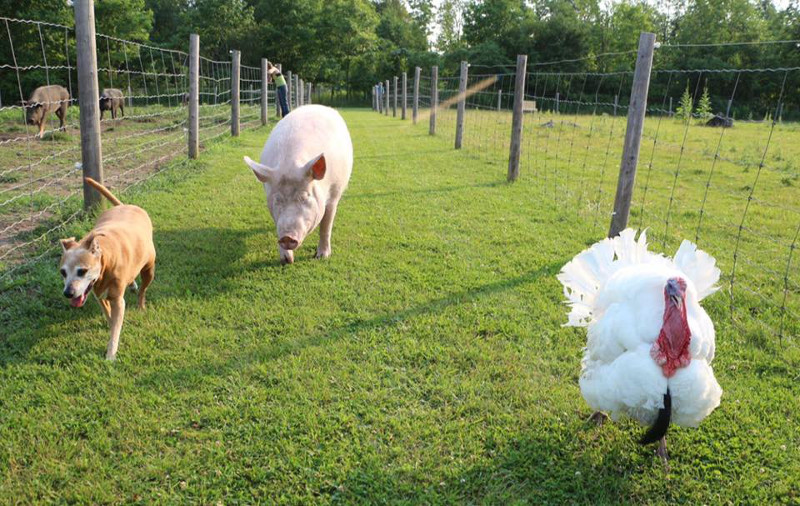 He’s always down for an adventure or two! 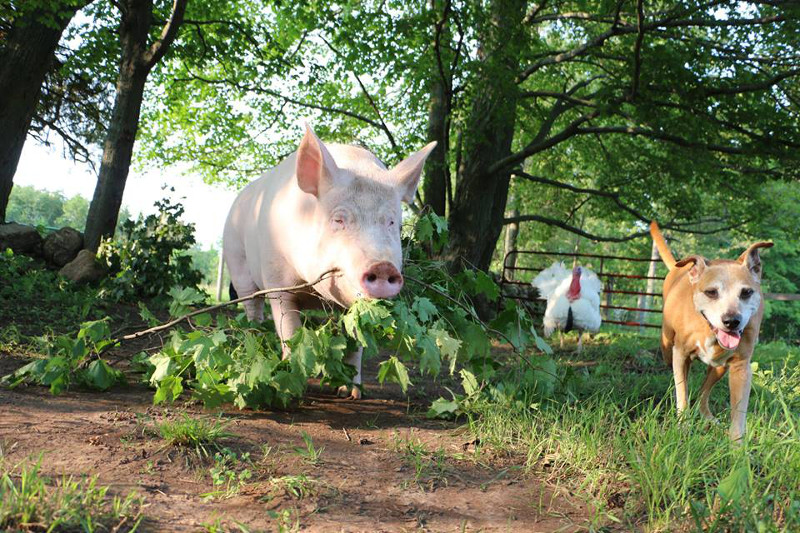 He has fully embraced his role as Esther’s official “doorman,” and takes his duties very seriously. Here, he can be seen loyally guarding the pink princess as she sleeps. Or perhaps he is casting a stern gaze upon her, thinking that her nap has gone on long enough, and she needs to wake up. We can’t decide! 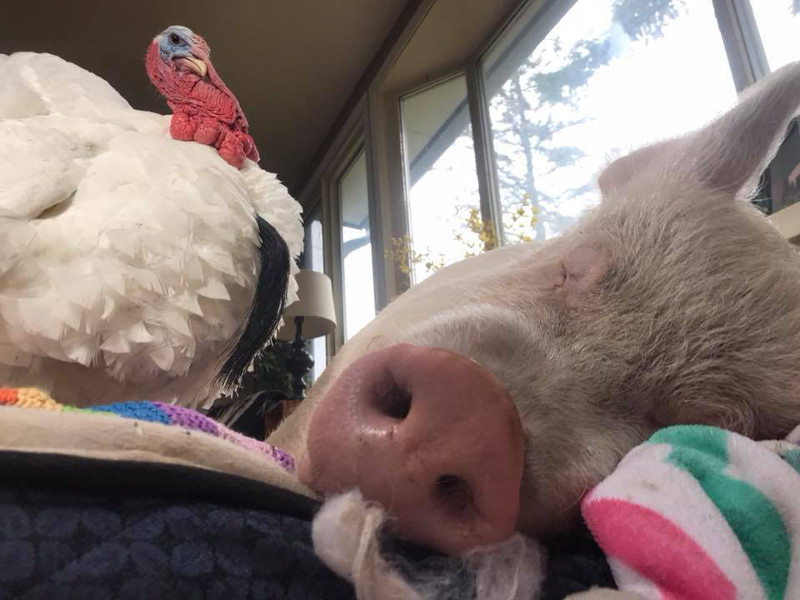 Either way, he is always by her side when she finally rises from her slumber. 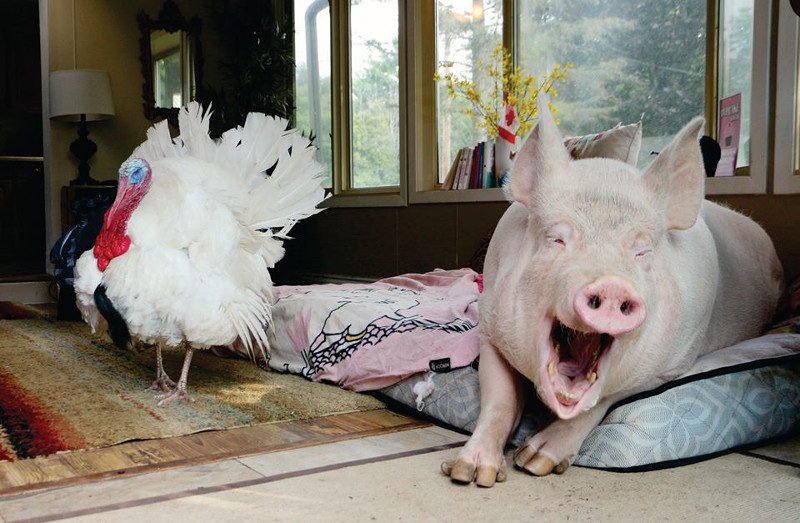 Cornelius has become a near-permanent fixture in the house during the day, but at night, he still prefers to sleep in the barn alongside his other feathered friends. His dads apparently have it on strict authority from the barn animals that he is “one loved turkey.” Unfortunately, he has not been fully toilet trained yet, and must, therefore, wear a diaper while he is indoors.

His dads tactfully refer to it as an “accident prevention device”. 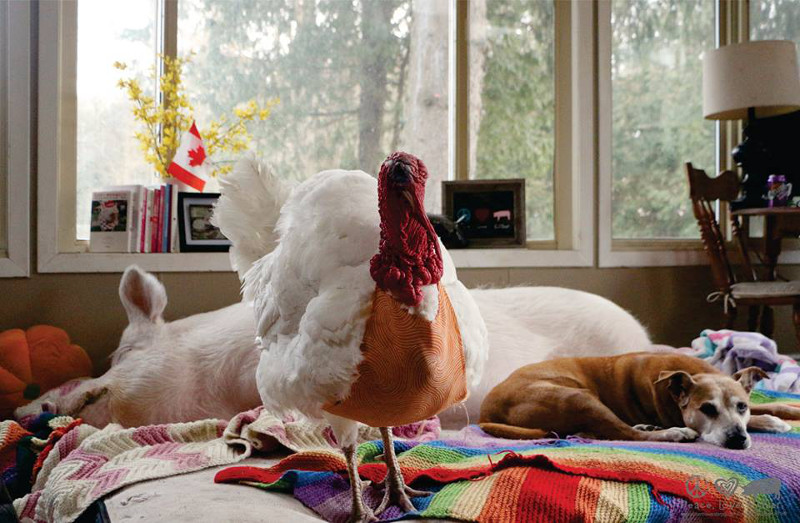 Cornelius knows exactly how to embrace the spirit of the season … and as you can tell by his impressive supermodel strut in this video, he is an absolute natural in front of the camera.

Have you ever seen a more fabulous duo?

It’s not all fun and games for this lovable boy, however. He has also demonstrated that turkeys have a deep capacity for emotions such as heartache, anxiety, and loss. When Esther fell ill a few months ago and had to be hospitalized, Cornelius kept a constant vigil outside the house, waiting for her to return.

Many people commented that his sorrow and loneliness could be plainly seen in this photograph. 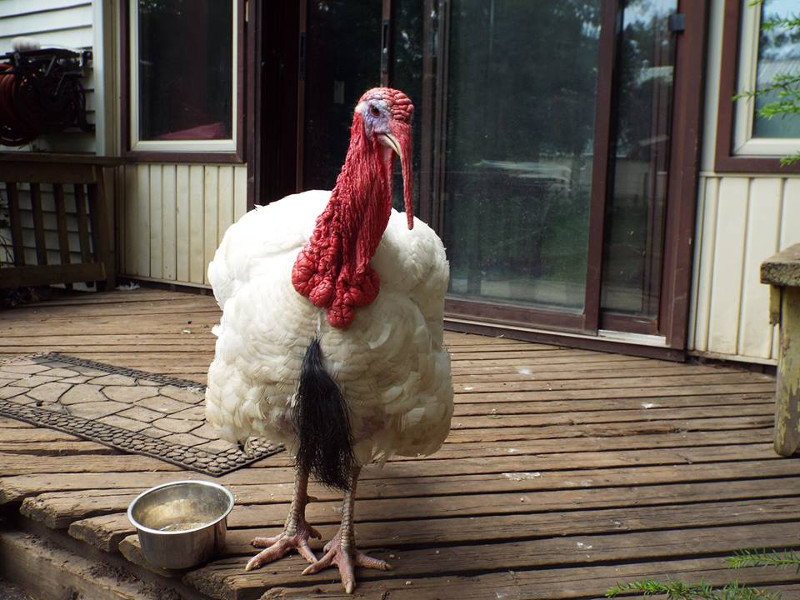 Cornelius adores every single one of his friends at Happily Ever Esther, but it’s safe to say that the true love of his life is Steve. 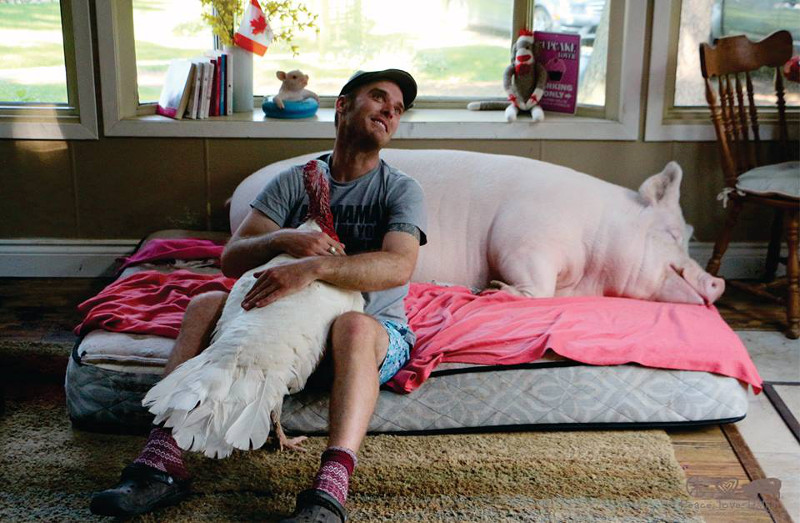 Ever since Cornelius began to make regular appearances on Esther’s page, Esther’s fans have grown to love him, with many people commenting that they never knew just how smart, funny, and affectionate turkeys could be until they got to know him. Some commenters have even said that he inspired them to stop eating turkey meat for good! Cornelius is an amazing ambassador for his kind, showing the world that turkeys are just as worthy of love and respect as large farm animals. To learn more about his hilarious adventures, visit Esther’s Facebook page.

There are many alternatives to eating turkey this holiday season — click here for some mouth-watering recipes you may want to try instead!

Happily Ever Esther is currently running a Holiday Magic fundraising campaign, aiming to reach a target of $100,000 before December 31st. They are now over halfway there, so if you would like to help out, just go to their website to find out how you can donate.

All Image Source: Esther the Wonder Pig and Happily Ever Esther Farm Sanctuary