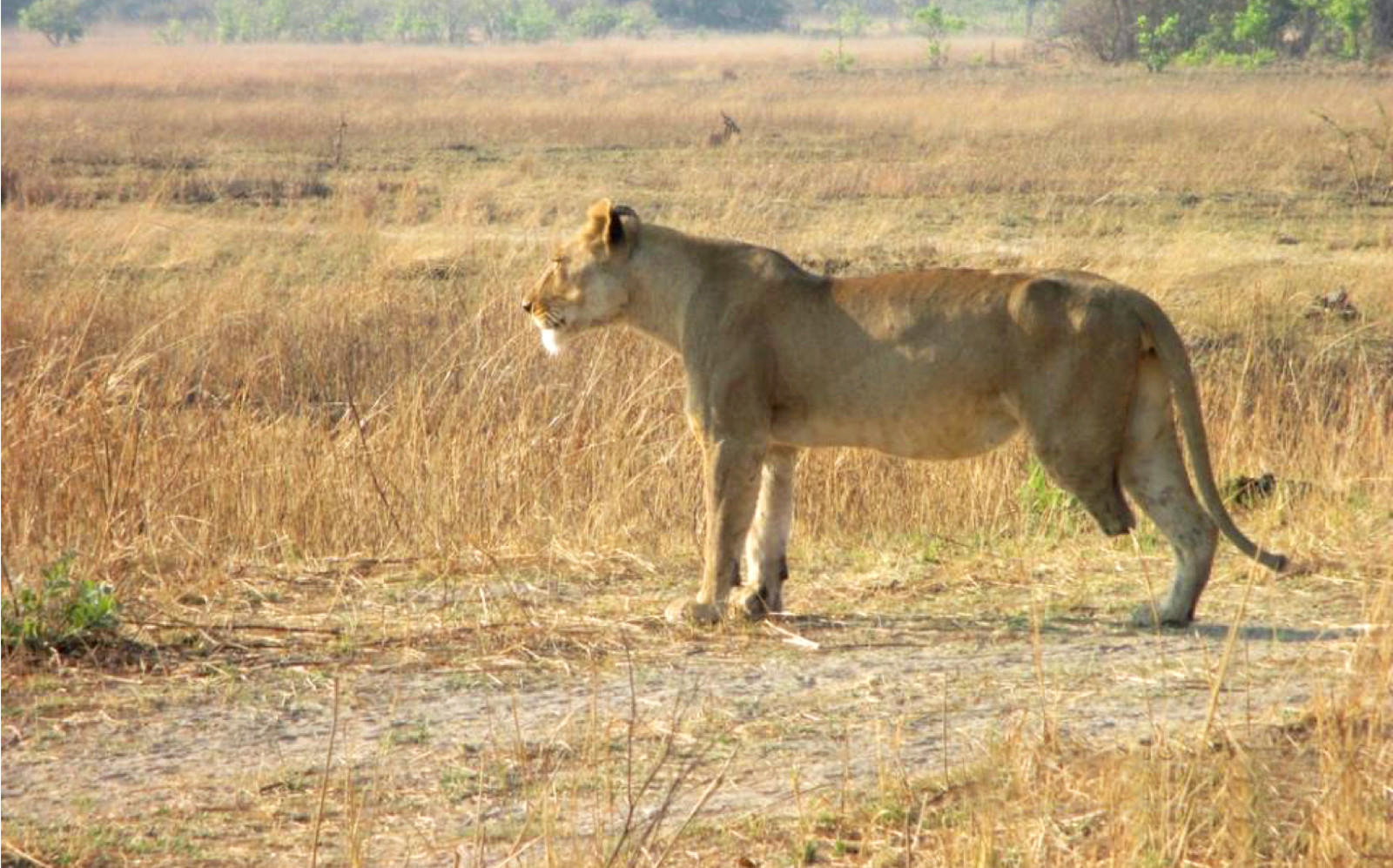 Unfortunately, this lioness’s affliction is not uncommon; many lions in southern Africa have been grievously wounded or even killed by snares set for their prey.

Encountering snares and the suffering they inflict is the tragic reality of working in the protected areas of southern Africa. Used for illegal bushmeat poaching — the hunting of wild animals for their meat — wire snares are typically set to catch herbivores, but they will trap, debilitate and often kill any animal. Large carnivores including lions, leopards, cheetah, wild dogs and hyena all too often get their necks or limbs caught in the snares, causing tremendous pain and suffering and often a slow, excruciating death from strangulation, infection or starvation.

But this particular lioness — who we call the tripod lioness — is one of the lucky ones. Though she lost her foot to a snare, her leg has healed and she remains with a small, loyal pride. Just the other day, a guide from a nearby lodge was treated to an amazing sight: two members of her pride were feasting on a young buffalo carcass stuck deep in the mud. Presumably understanding she was unable to navigate the mud on her three legs, the two lions dragged the kill out of the mud so the lioness could also feed. But so many other large carnivores are not so fortunate.

Though lions, leopards and cheetahs are stunningly capable of surviving even the greatest odds — droughts, floods, famine and disease — none of them is immune from the indiscriminate and deadly wire snare.

In Kafue National Park, Zambia’s largest and Africa’s third largest national Park, Panthera supports DNPW and its partner Game Rangers International to address this issue through rapid response to poaching events and removal of snares from the Park. Since 2015, this partnership has recovered 288 snares, and our next move is to create safe haven snare-free zones where carnivores and their prey roam free and safe from snares.

But snare free zones aren’t enough. The tripod lioness represents just the tip of the iceberg in Africa’s bushmeat poaching crisis. Many parks in Africa have less than a quarter of their potential prey and a correspondingly low proportion of lions, cheetah and African wild dogs. In the Greater Kafue Ecosystem in Zambia, our research shows that while some poachers use snares, many use guns, killing and wounding many animals each year. Safe zones must therefore also be free of guns, which threaten animals and the brave anti-poaching patrol scouts who put their lives on the line to protect wildlife.

Over the next five years Panthera is seeking ways to support DNPW and its partners to create at least five large (up to 600 square miles each) safe zones in Kafue National Park. To strengthen law enforcement in these zones, local communities will act as conservation and business partners to reduce the need for bushmeat poaching by providing alternative livelihoods in these zones and a sense of pride and identity with each zone.

It is hard to watch the tripod lioness limp to the relative safety of the riverbank. As I watch her struggle across the hard ground, her stump touching down only occasionally where the ground is softer, I make her a silent promise. Soon, we will find a way to create safe zones, where carnivores and their prey flourish. There will no longer be reason to apologize to animals like her; our apologies will be replaced with the joy of seeing lion cubs play fight, practice the skills of hunting and just be lions, without the fear of humans, their snares and their guns.

Watch Panthera’s video about this tripod lioness and how we’re working to protect big cats and other large carnivores from deadly snares.