This Animal Rights Group is Taking Their Campaign to Campuses Across California!

The first step towards change is awareness.

Animal rights group Compassion Over Killing has just announced they’re kicking off their spring iteration of their Beyond The Lies program, which brings a powerful message of compassion towards livestock animals across California college campuses. The program’s purpose is to raise awareness among young people about suffering of animals raised and slaughter for the food we eat. The ultimate goal of the program is give young people the choice to eat mindfully, and join the already swelling ranks of vegans in the United States.

The program uses a relatively direct means of motivation. The COK’s team will pay one dollar to any student willing to watch the organization’s powerful video, which exposes the cruel realities of animal agriculture. The video also includes footage of rescued farm animals living their lives in sanctuaries, proving that a better world is within reach for these suffering creatures. After the viewing, participants will have the opportunity to take a pledge to choose vegan foods. 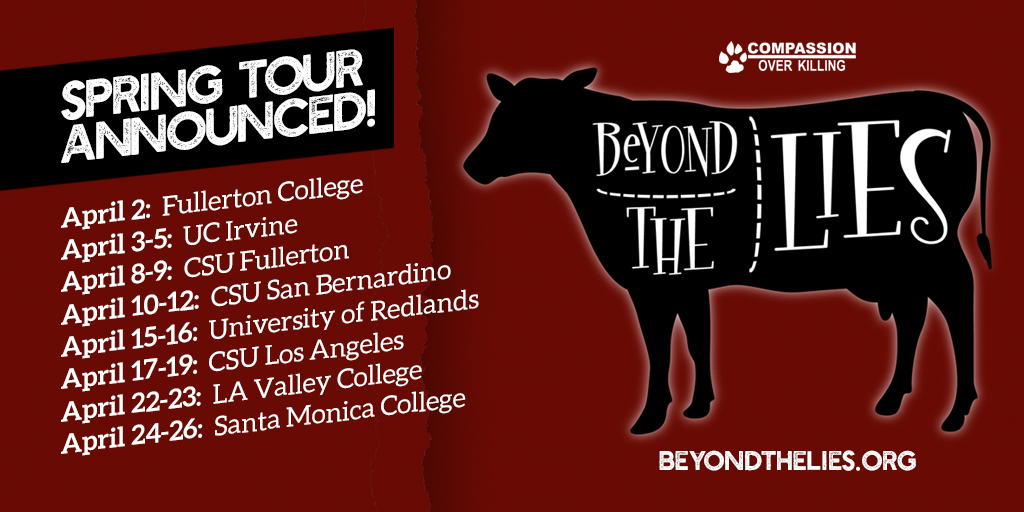 During last summer’s tour The COK team reached over 12,000 people at 63 different events. If you’re living in California, you can attended the events yourself at the dates listed above.

College students are notoriously open to new ideas, and education programs like this one provide a much needed service in the fight to change the way we eat. In a world so obsessed with going vegan for health reasons, the ethical side of plant-based eating should never be ignored.