Oil spills. They’re expensive, they’re dangerous, and they’re just downright nasty. Each year, more than 14,000 oil spills are reported in the United States, and each one ranges in severity. Though no two oils spills are exactly alike or have the exact same effects, there are two things they all share in common:

So, you remember those cute little dish soap commercials on TV that show oil-ridden pelicans and sea otter pups gettin’ a squeaky clean (and absolutely adorable) scrub in the tub, right? Well, sadly, it takes more than a warm soapy bath to fix the damage caused by oil spills. While the oil may be off of the animal, patches of it still exists in the ocean just waiting to damage anything that happens to swim nearby.

To help combat oil, chemical “dispersants” have been used to tackle oil slicks by breaking oil into tiny droplets that – given time – dilute and biodegrade within the water column. According to CNN, dispersants are “special fluid chemicals that bond to the oil molecules and separate them from water molecules, thus breaking up the oil.”

While it would be nice to believe that dispersants rid the ocean of oil forever, the truth of the matter is that dispersants do not reduce the amount of oil entering the environment. Instead, they literally just push the problem (a combination of oil AND chemicals) underwater where we can’t see them … but trust us when we say that, given time, the effects will quickly be visible and completely unavoidable. Just look at the tons of oil recently discovered at the bottom of the Gulf of Mexico. Not only does it appear that our methods of cleaning up oil spills are ineffective, but the chemicals used in dispersants are also damaging marine life. Dispersants wreak havoc in ocean environments, and have proven to be harmful to many marine organisms. Here are a few organisms that are impacted by the use of dispersants.

Oil spills are particularly bad news for coral reefs as they are already at risk of other harmful events, such as ocean acidification and climate change. If a dense patch of oil hovers over coral for an extended period of time, the oil will eventually sink, ultimately smothering the coral and preventing it from eating, reproducing, and just existing in general. According to NOAA, it is not recommended that dispersants be used to clean up oil spills near coral reefs for two reasons. For one thing, dispersants don’t work on every oil spill and are mainly effective on deep water spills as they can simply break apart oil and mix them in deep water columns. The second reason is that dispersants are known to be chemically toxic to coral reefs.

In 2007, a group of researchers in India discovered that oil dispersants are considerably more toxic than the oil spills itself. In a lab setting, the scientists observed and recorded the effects of crude oil and six commercial oil dispersants on the health of two species of Indo-Pacific branching corals. After exposing corals to toxins of various concentrations in a single 24-hour period, the survivorship of the subjects were recorded for 50 days. In the end, scientists found that the dispersants (even in low doses) caused significant delays in growth rates as well as rapid death among every coral colony. Unfortunately, without many alternative methods in place, dispersants are continually used near coral reefs. According to NOAA, “the potential impacts to the reef should be weighed against impacts that might occur to birds, mammals, turtles, and sensitive shoreline resources (such as mangroves) where it is extremely difficult to clean the oil.” Quite the catch 22. 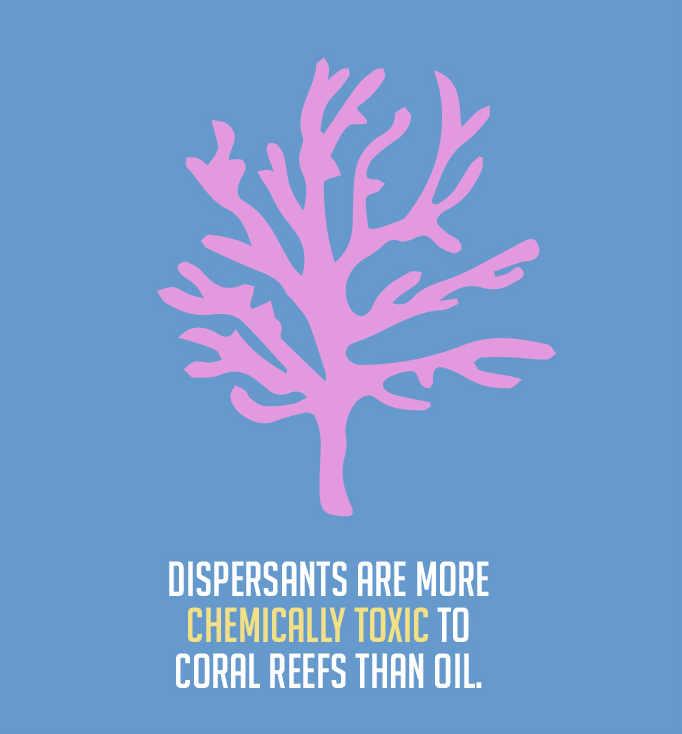 While birds (especially pelicans) tend to be the poster children of oil spills as they are most likely to dive into an oil slick without realizing. However, it seems that dispersants actually exaggerate the effects oil has on birds. Dispersed oil actually damages the insulating properties of feathers more than untreated oil which ultimately causes birds to become susceptible to hypothermia. Additionally, in September 2014, scientists identified the chemical dispersant, Corexit, as a potential factor in the increase of unhatched white pelican eggs. In a 2011 survey, researchers from North Dakota State University discovered traces of the dispersant, Corexit, in the eggs of pelicans nesting in Minnesota that failed to hatch. These birds migrate between Minnesota and the Gulf of Mexico annually, so it is expected that the birds have passed on problems from the BP Deepwater Horizon spill to the next generation of pelicans. The study is relatively new, and work is currently being done to understand the issue. 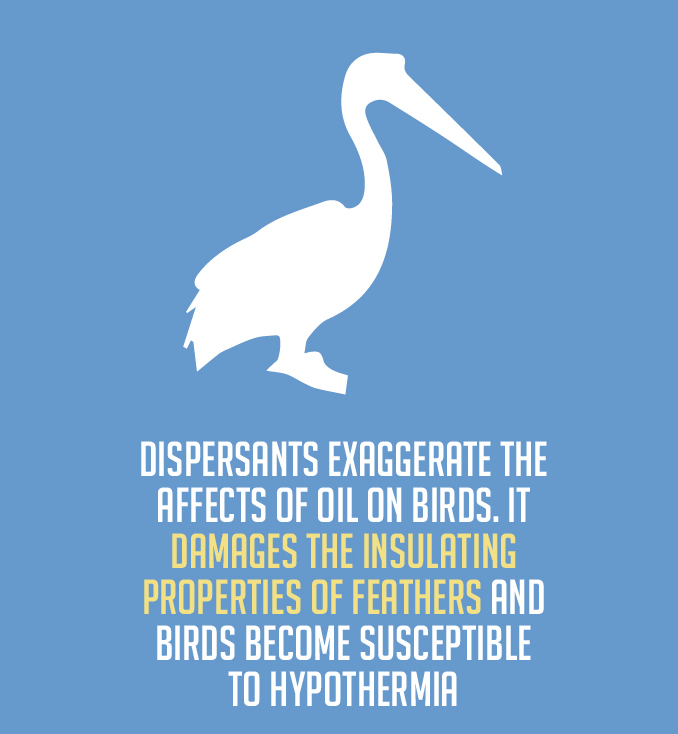 While cetaceans do have hair, they do not grow fluffy, protective fur coats the same way a sea otter would; instead, they have thick layers of blubber to protect them from hypothermia. Since their skin is constantly in contact with the water, dispersants can easily effect the smooth skin of dolphins, porpoises, and whales. If a cetacean were to swim through a water column that contains dispersants, they can experience skin irritation, chemical burns, and infections. Marine mammals are also placed at risk of dangers when exposed to dispersants through ingestion and inhalation. Ingestion of dispersants can happen by taking in too much seawater or eating fish that are riddled with dispersants. According to NOAA, “Ingestion of oil or dispersants may result in gastrointestinal inflammation, ulcers, bleeding, diarrhea, and maldigestion.” Whales don’t breathe water … they are mammals after all. But dispersants can still find themselves floating through the air after evaporation. If inhaled, cetaceans may experience irritation or injuries to the respiratory tract which can ultimately lead to inflammation or pneumonia. 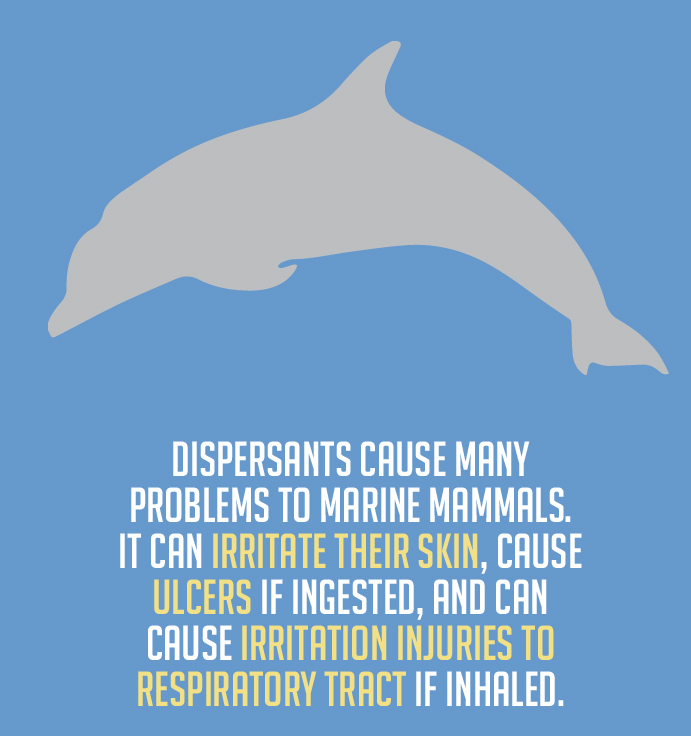 So Now What Can We Do?

Having almost two million gallons of dispersants dumped into the Gulf of Mexico, the BP Deepwater Horizon oil spill used more dispersants than any other oil spill in history. Also, for the first time ever, the spill lead the EPA to approve of the use of dispersants below the water’s surface and at the source of the spill. Basically, this means that dispersants were present at all levels of the water column, wreaking havoc among animals along the way. In July of 2010, the death toll among animals in the Gulf of Mexico included 1,866 birds, 463 turtles, 59 dolphins, and one sperm whale. None of these animals had been contaminated by oil but instead they all perished from the combination of oiled fumes and dispersants.

Does this mean we should just leave spills as they are and allow them to rampage across ocean ecosystems?

Absolutely not. We are simply saying that there are different methods to cleaning up oil spills that should be considered in the future. In fact, just this fall, a graduate student studying chemical engineering at the University of Rhode Island discovered that some nanoparticles can actually be used as potential alternatives to current dispersants. These particles are capable of creating shells around a drop of oil and reducing the amount of toxins that are transferred into the water.

While an effective alternative to harmful dispersants might be far off, it is important to remember that the heart of the matter lies with our dependence on oil. You can take a stand against Big Oil by joining the Sierra Club in their Beyond Oil campaign, for more information click here.