The Environmental and Public Health Impact of Commercial Fish Farming 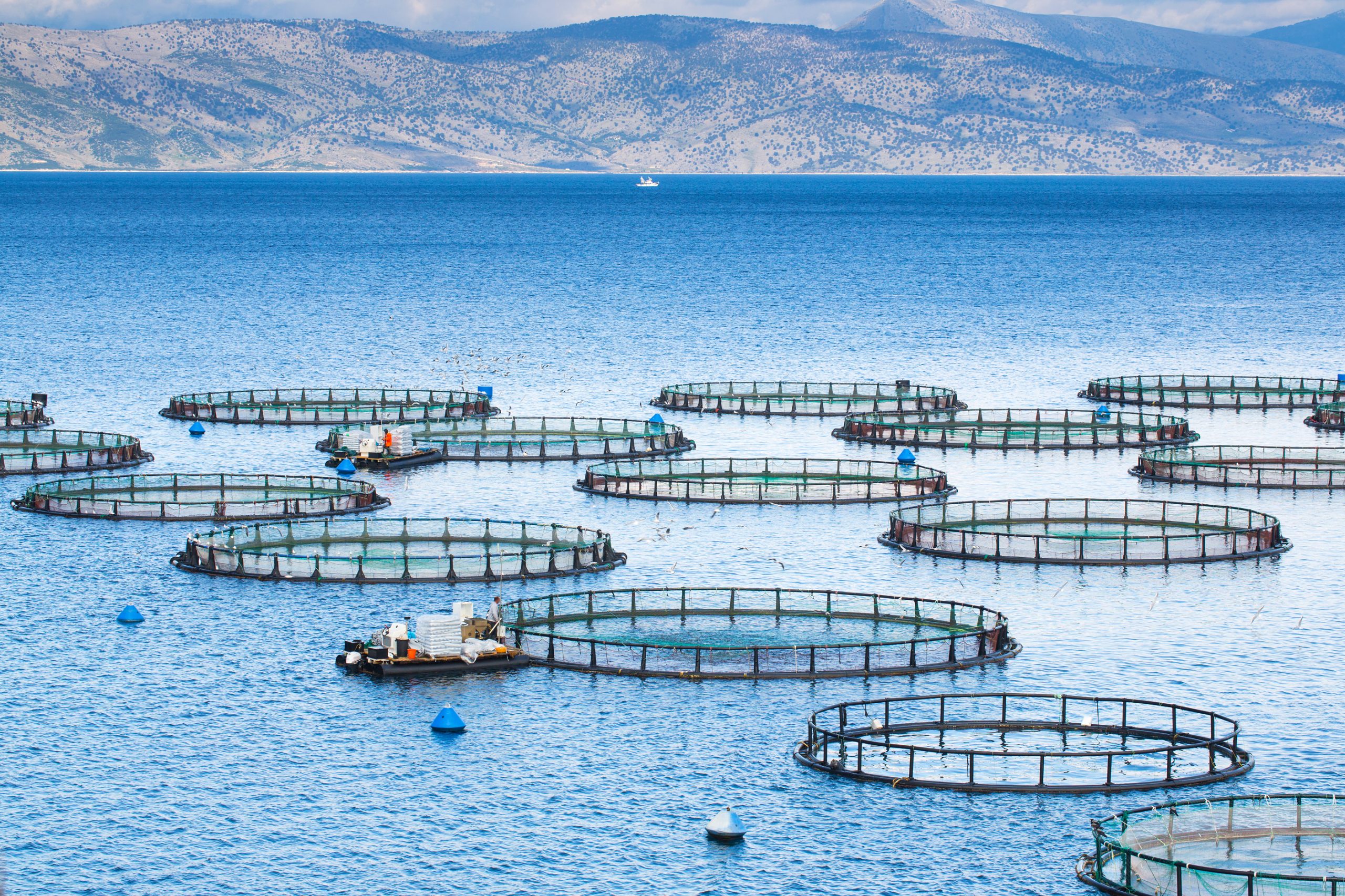 Fish farming has been commended as a more sustainable alternative to both wild-caught fishing and livestock agriculture. While overfishing and ensnarement of other marine life are not as prevalent in fish farming practices, this industry is still incredibly cruel and environmentally detrimental.

Although many fish farms boast that their aquaculture practices do not risk overfishing natural populations of fish, this is only true for the type of fish they are farming. For example, many of the bigger fish humans eat such as salmon are carnivorous. Thus, to keep them alive long enough for slaughter, fish farmers feed them fish meal made from frequently overfished populations. Not only does this practice contradict the idea that fish farms are “good” because they don’t contribute to overfishing, but it also demonstrates how calorically inefficient fish farming is. Other studies have corroborated this caloric inefficiency by comparing aquaculture and land animal agriculture. Farmed fish convert protein and calories from feed into edible seafood at similar rates to cattle and other livestock animals. In fact, 70 percent of wild-caught fishmeal and 90 percent of wild-caught fish oil is fed to farmed fish. Specifically, to produce just one pound of farmed salmon, it can take five pounds of wild-caught ocean fish.

2. In open farms, pollution freely travels from farm to sea

Open-ocean aquaculture consists of farmed fish raised in large cages placed directly in open waters. Because of their placement, mass amounts of waste produced by these tightly packed fish are free to transfer from the cages into the surrounding water. This accumulation of waste can lead to oxygen depletion in the water which can cause toxic marine algae blooms and harm the surrounding marine animals. This waste can also sink and affect biodiversity along the ocean floor. Similarly, because farmed fish are susceptible to disease, they are routinely given antibiotics that can be detrimental to marine life and human health.

One study found that salmon farms in British Columbia were producing as much waste as a city of half a million people.

Not only can pollution seep from cage to surrounding water, but fish can escape as well. Once these fish escape they mingle with native fish which can weaken the population’s overall genetic diversity, introduce non-native species to the environment, or ravage native species with parasites and diseases.

Aquaculture is posing a serious threat to mangroves in areas of Asia and Central and South America. As demand increases more and more mangroves are being converted into fish and shrimp ponds.

Contrary to popular belief, fish are complex beings and not marine automatons. Fish enjoy having their own space to freely move around as they would in the wild. However, much like with factory-farmed livestock, fish farmers are driven by profit, so they cram as many fish as possible into the smallest tanks possible. These overcrowded environments are stressful and inhibit the movement of the fish. The overcrowding causes the fish to knock into each other and the sides of the tanks which can damage their fins and cause sores.

Having such a large density of fish in a small area means that waste rapidly accumulates in their tanks. Similarly to livestock animals who are forced to walk around in their own feces, these fish are forced to swim around in theirs. These unsanitary conditions put stress on the fish and can lead to major health problems.

Living in such stressful and disgusting conditions allows disease and parasites to run rampant among farmed populations. One of the biggest threats farmed fish face is sea lice. These tiny creatures eat at the fish which can cause sores and scale loss. In such tightly packed cages, these parasites proliferate. In particularly crowded tanks, the parasites can even gnaw down to the fish’s bones, which leads to a condition known as “death crown.”

As mentioned, since open-farmed fish can escape from their cages, the sea lice can escape with them. In fact, salmon farms have led to the near demise of populations of wild salmon in places like Norway and Vancouver.

Farmers know how high-risk their fish are for diseases and parasites so they inject them with antibiotics. This process is extremely unnatural and stressful for the fish as workers remove them from the water and pierce them with injection needles. This process is so traumatic for the fish that it takes them a week to eat again, that is if they don’t die from shock first.

3. Fish are susceptible to deformities

Farmed fish are often subject to violent mistreatment. Investigations have documented innumerable instances of fish being thrown around, slammed to the ground, and stomped on – among other cruel actions. This maltreatment combined with crowded, squalid tank conditions leads to numerous deformities among the farmed populations.

Such deformities include cardiac malformations and bent spines, which are suspected to be caused by a list of factors such as artificial lights, unnaturally warm waters, toxin exposure, and vitamin deficiencies.

Likewise, due to their unnatural accelerated growth, these fish often develop deformed ears, leaving them deaf. This deformity is present in about 95% of farmed fish.

Additionally, if the fish aren’t fed enough, they begin to think the pupils of other fish are food, which leads them to peck out each other’s eyeballs.

Mercury occurs naturally in Earth’s crust, however, human activities like burning coal exacerbate the release of mercury into the atmosphere. Once mercury is released into the environment, it dissolves in water, allowing it to accumulate in the bodies of marine life in the form of methylmercury. Once this methylmercury builds up in the bodies of fish, it can easily be absorbed into the stomachs and intestines of the humans who consume them. Methylmercury demonstrates biomagnification, meaning that its concentrations are higher in predator tissue than in prey tissue. In fact, research has shown that about 80 to 90 percent of the organic mercury in a human body comes from the consumption of fish.

According to the NIH, exposure to organic mercury, such as methylmercury, can cause a variety of symptoms such as memory problems, seizures, tremors, and even death. Mercury exposure during pregnancy can cause immense harm to the fetus‘ developing brain and circulatory system.

In the United States, there are no regulations in place protecting the way fish are treated. Investigations by the Humane Society have deemed the methods for fish slaughter as inhumane and unacceptable. These methods include suffocation, stabbing, stunning with carbon dioxide, hemorrhaging blood from their gills, and electrocution. Even if there were standards dictation “humane” treatment…what is an ethical and humane way to slaughter a living creature that wishes to live?

However, due to the stressful, cramped, squalid horrors of captivity, perhaps death is more merciful than life.

The suffering that fish are currently subjected to is overwhelming and beyond comprehension, but we can change this reality. Please consider taking the following actions:

To give fishes the respect and care they deserve, keep them off of your plates and refrain from fishing, even if you plan to throw them back. Aside from fishes being sentient creatures who want to live, there are numerous other reasons to avoid eating fishes, including fish extinction, and pollution consumption. To inspire your Fishesless meals, check out the delicious recipes listed below!