The Amazon Wants You… to Stop Eating Meat 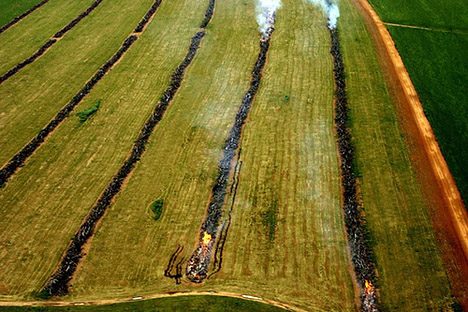 Last year I visited the Amazon region by invitation of a governmental Brazilian agency that promotes trade to visit projects that explore the forest in a sustainable way. I was joined by a group of American, English and French journalists and spent some of the most memorable days of my life there. Seeing the Amazon firsthand is an exhilarating experience. The forest spreads for hundreds and hundreds of miles like a gigantic broccoli because so intricate and impenetrable it is when seen from above. The rivers are so wide that they look more like seas. Even though we can’t see all the biodiversity that this gigantic kaleidoscope of natural beauty harbors, we can sense the power and presence of life pulsing out of this awe-inspiring landscape.

At the time, we were told that deforestation levels were at a record low thanks to more sophisticated monitoring technology. We had the chance to see it personally when we visited the headquarters of the Brazilian Space Agency (INPE), which develops sophisticated tools to help IBAMA, the Brazilian environmental agency, with the gargantuan task of keeping the world’s most bio-diverse biome safe from loggers and cattle ranchers. It seemed that political good will and investment was yielding fruit. But 2011 saw same drastic changes in the Brazilian political scenario.

President Lula was replaced with this protégée Dilma Rouseff, whose green pledges do not seem to come out naturally from her; they seem more of an inconvenient protocol she needs to adhere to. She’s the woman who said at the 2009 COP15 in Copenhagen that “the environment is the biggest obstacle to sustainable development”. Whether or not linked to the new Dilma era, one thing is clear: 2011 has not been a good year for the Amazon. Recently, deforestation levels in the region have reached a record high after a sequence of years when it seemed to be getting under control.

In mid-May INPE announced a sharp rise in deforestation during March and April in comparison with the same period in 2010. The institute recorded 593 square kilometers of forest clearing during that period (roughly 10 times the size of Manhattan), or a 473 per cent increase. The State of Mato Grosso, famous for its cattle ranching and massive soya plantations that feed cattle abroad, is where 81 per cent of the clearing occurred. It is a widely acknowledged fact that deforestation in the Amazon is driven by industrial agriculture and land speculation. More than 70 per cent of deforested land becomes cattle pasture.

At the time pundits linked the spike in deforestation to a concomitant debate in the Brazilian congress. A new draft of the Forest Code, the national legislation that regulates forest coverage on private properties, was being proposed (by now approved by a majority vote in Congress, although the President has the power to veto it), which undermines the legislation and gives deforesters amnesty. The possibility of not being punished for deforesting is already working as an incentive to clear native coverage, environmentalists have said.

Late May saw another blow to the Amazon. Belo Monte, a much antagonized dam project to be built on River Xingu and which will flood 120,000 hectares of rainforest and displace 40,000 Indians, got the green light after a legal wrangle that goes back decades. Not even the power of celebrity supporters such as James Cameron, Sigourney Weaver and Sting were enough to deter a government that is keen to use the Amazon region as a hub of hydroelectricity. The NGO International Rivers says Belo Monte will generate a huge amount of methane, a greenhouse gas that is 25 times more harmful than carbon dioxide. Brazilians have taken to the streets to protest against Belo Monte and the new Forest Code, showing once again that the public wants the environment at the top of the priority list and that a developing country like Brazil does not need to sacrifice sustainability in order to improve its economy and standards of living. Brazil needs to find a way out of a paradox it finds itself trapped in.

On one hand it genuinely seems to want to preserve the Amazon, both for pragmatic reasons (to curb emissions as part of the Kyoto Protocol and to preserve biodiversity) and for symbolic reasons, as the Amazon is one of the great Brazilian icons and an important element of the country’s identity. But at the same it takes pride in having become the biggest global beef exporter. Some of the meat-producing states are also looking to increase herds for live export. The trouble is, cattle ranching and forest preservation are simply incompatible; the country will have to make a choice. But it’s not only the Brazilian government that needs to take action.

If Brazil is keen to produce beef for export, it’s because other countries demand it. Therefore, if we are serious about protecting the Amazon and other important biomes that get less attention but are equally important, foreign governments and the public need to make sure they don’t contribute to the devastation of Brazil’s vital resources.

Since I’ve seen the Amazon with my own eyes, I can’t stop thinking about its grandeur, beauty and the natural treasure that it is. A world without the Amazon would be a very sad place, and probably a not viable one since we don’t quite know how badly global weather could be affected by its demise. The stakes are too high for us to be complacent.

We can all do our share to save the Amazon by avoiding livestock products. It’s our choice.